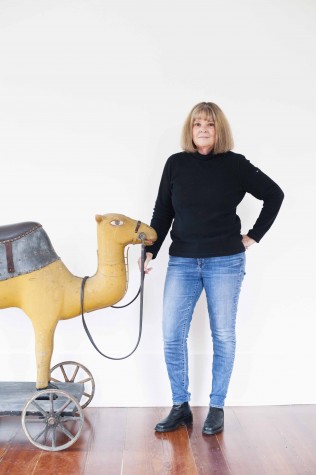 Karin Blake stands in her new Yarmouth home. After working for years in California and Massachusetts, the interior designer has recently moved to Maine, where she is restoring an old brick house near Yarmouth center. 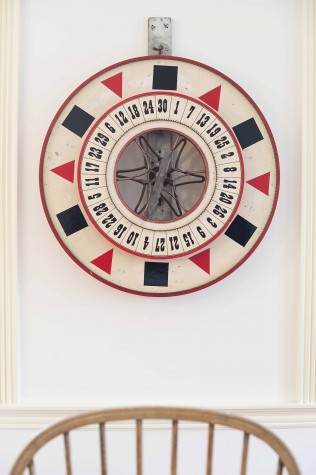 Blake’s interest in American folk art springs in part from her childhood in Pennsylvania. She has always loved Amish quilts with their bold colors and geometric patterns. Here, a vintage game board repeats those patterns and colors, but in an entirely different format. 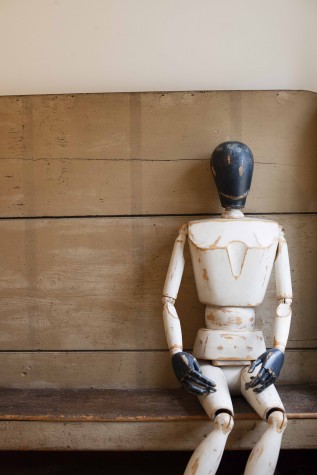 In her entryway Blake has stationed a wooden mannequin that was once used for figure drawing classes. “He’s my guard,” she says.

After a long career as an interior designer in Hollywood, Karin Blake moves to Maine, bringing scores of vintage treasures (and a sophisticated design sense) with her.

Karin Blake didn’t always love visiting antique stores. When the 74-year-old designer was growing up in Bucks County, Pennsylvania, her mother would “torture” her by making every car ride, even trips home from school, into a scouting mission. “We couldn’t make it home without stopping in an antique shop,” she recalls. “Of course, I hated it then.” But those after-school trips did something to Blake’s sense of beauty, awakening an appreciation for American folk art that would come to define her career as an interior designer.

Now, the walls of Blake’s Yarmouth home are adorned with objects purchased from antique dealers or uncovered at flea markets. Instead of paintings, Blake decorates with metal targets riddled with bullets from old shooting galleries. She hangs vintage game boards and carved wooden whales, complete with fearsome jagged teeth. Her foyer has a life-sized wooden mannequin, a former model for art students. “He’s my guardian,” she jokes. “He watches over the front door and keeps me safe.”

Blake’s dry wit is visible in her designs, which combine playful oddities with minimalist surroundings to create gallery-like spaces. “I prefer to focus on one piece. I hate clutter,” she says. “When you enter a room that I’ve done, there is usually just one thing your eye will go to, one piece that makes the room.” To this end, Blake prefers working with white walls and overhead lighting. But while this might feel sterile in other homes, Blake keeps her residences relaxed by adding touches of bright color (her sitting room is painted in the bright Heritage Red by Benjamin Moore) and quirky folk art.

Her distinctive design style has evolved over years of working in California, Massachusetts, and Montana. She credits her love of folk art to her formative years in Pennsylvania, as well as her time spent summering on Cape Cod, where kitsch is common and antique markets are bountiful. “I loved Martha’s Vineyard and I considered moving there, but it’s so jammed now,” she says, explaining her recent decision to relocate to Maine. “In my lifetime, Maine will stay this way, I believe. It feels untouched in a way that other places don’t.”

But it was more than an affinity for Maine’s silence and solitude that brought Blake here. After her husband of over 50 years passed away, Blake needed a new start. Her children had gravitated toward Maine, and she found herself drawn to the state, too. Although she had a Hollywood client list in Malibu and a home she had owned for over 40 years (including a yard with one lone tree she planted decades ago), Blake was ready for a change. “It does take some getting used to. It’s hard to pick up and move everything,” she admits. “But I have trees here—big magnificent maples that evidently give maple syrup. I don’t take my trees for granted, not coming from California with the droughts.”

For now, Blake is busying herself with the process of renovating and designing her own space. Her new home in Yarmouth is big and rambling—filled with possibilities. “I’m going to knock down this wall here,” she says as we sit in the already-cavernous living room. She gestures toward another wall, behind her. “And bring in some big windows and industrial touches. I’m going to make this space into a big open gallery with lots of light.” She also has plans for her collection of game boards. “I like grouping things together, especially odd little things like that.”

Although the space is unfinished, Blake has unpacked several pieces of folk art to show me, and as we wander through the freshly painted rooms, she stops to point out various finds: a large wooden dog that sits next to her couch, a life-sized statue of a Native American in full ceremonial regalia, and then a faded wooden frame with a handle and spikes. “Guess what it is!” she says with glee. As I struggle to identify the strange device, she picks it up and mimes dragging it through the dirt. Something clicks: it’s for making seed-rows. “I bought this Shaker piece in my late teens.” Blake laughs, then adds, “I was a weird kid.”

But to me, her early interest in folk art doesn’t suggest strangeness so much as a firmly established aesthetic sense. She gravitates toward brightly painted pieces, rough wood, and objects that are battered and faded. Over the years, her style has become plainer, yet more focused. Her clients understand this, and often seek her out for precisely this reason. “I’m lucky to have so many great clients who really get what I do,” she says. “Plus, I have so many clients who want the pieces I have; I can just move pieces around. If there’s something I bought and loved that just doesn’t work in my house, I can pass it on.” She remembers one piece in particular—an old sculpture of a clown’s head from Coney Island— that just “never quite worked in my house.” When she was working with a California client who had a long hallway, she decided to try placing the three-foot-tall jester at the end of the corridor. “It was perfect—it just popped.”

However, she has finally reached a point where she has just too much stuff, especially for her pared-down sensibility. “If I put everything out, it would be way too cluttered. My kids have asked me to please stop giving them pieces,” she says. But that won’t stop her from exploring the many antiquing opportunities Maine has to offer. While she has a certain West Coast appreciation for openness and space, she also loves the history of the East Coast, the packed flea markets, and the quaint farmhouses. It creates an interesting tension in her work, one that is difficult to describe but easy to recognize.

“Here, I have something that will make sense of this,” she says, handing me a faded scrap of paper printed with a quote from French author Antoine de Saint-Exupéry. She had been trying to articulate something about her design sense, about the balance between rustic folk pieces and modern white walls, about the blank spaces and editing process, the tension between objects and absence. But somehow, the little piece of paper puts it perfectly: “You know you have achieved perfection in design not when you have nothing more to add, but when you have nothing more to take away,” I read aloud. “That’s me,” she says, simply. 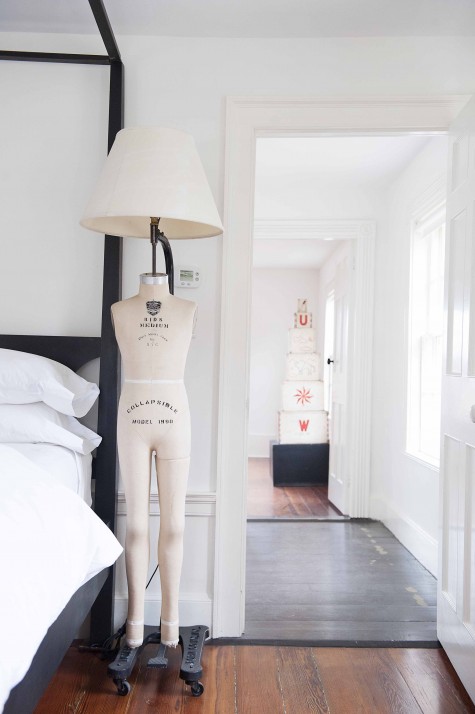 Blake has been collecting mannequins for years. Here, she turned a mannequin into a standing lamp. Although she doesn’t often like using lamps in her homes—she prefers overhead lighting—she makes an exception for places where she might want to curl up with a book. 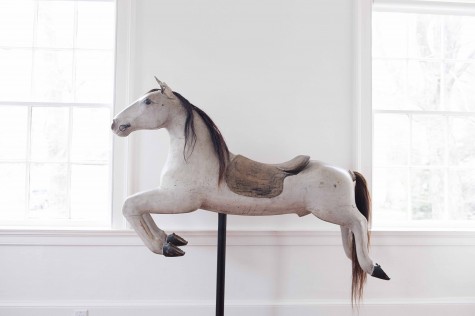 “I have always had animals in my life,” Blake says. “We had horses at our ranch in Montana. I even had a pet raccoon when I was little.” Now, animals frolic around her house in the form of wooden sculptures and brass figurines. 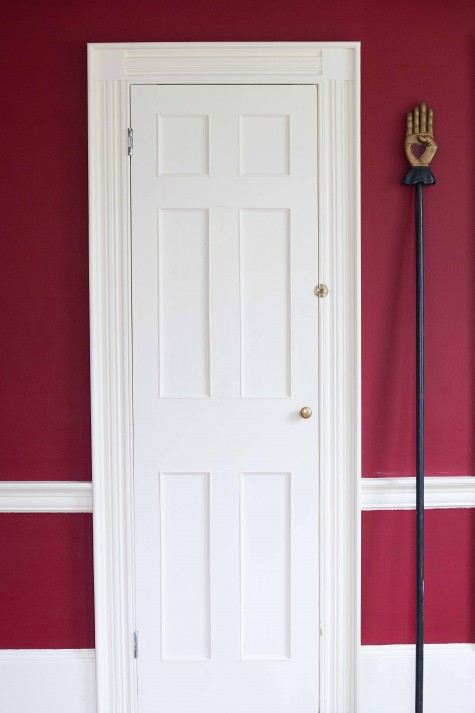 Most of the rooms in Blake’s home are bright white, but she does like this bold hue, Heritage Red by Benjamin Moore. “I’ve used this red before,” she says. “I find it kind of soothing.”