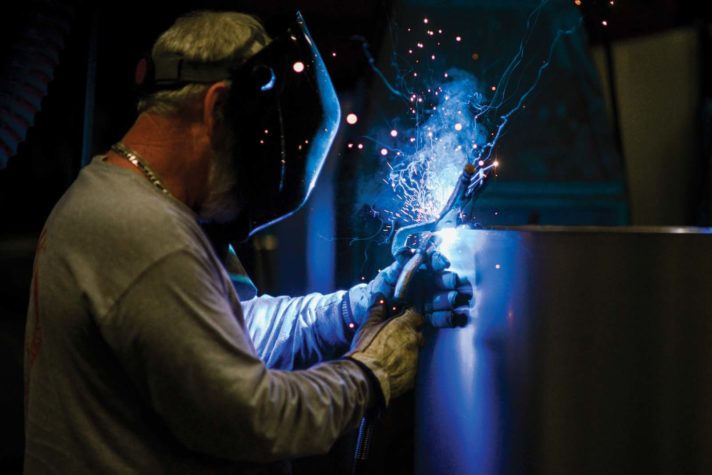 Welder Bruce Hubert works on a custom fabrication project for a commercial client. 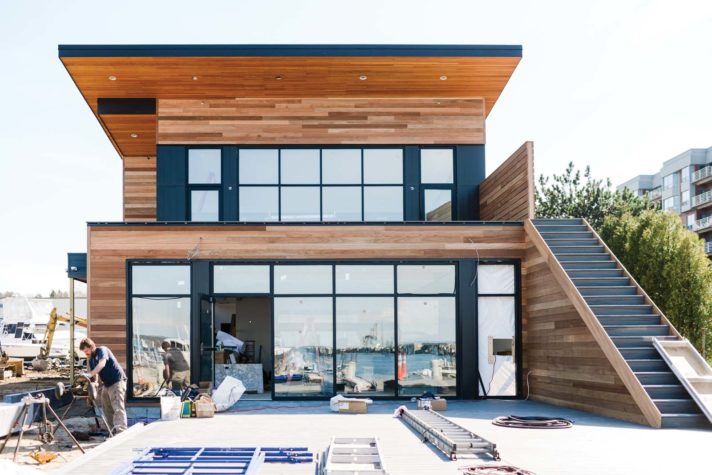 The glass facade of 43North provides a beautiful view of Casco Bay but presented a challenge in terms of keeping the building cool on hot summer days. Brian Haley designed a system that will do the job.

fficially, 2017 marks the 100th anniversary of Haley’s Metal Shop in Biddeford. But Brian Haley, who runs the fifth-generation family business with his son Matt, says its history may go much farther back. In the early 1980s, after Brian and his sister Joyce joined their father at the company, they decided that Haley’s needed a logo. They asked him what year the business had been founded, and he said 1917. “There wasn’t really a whole lot of basis to that except that my great-grandfather, Robert Jordan, was in business in 1917,” says Brian. “We found a newspaper article about him doing a church in Biddeford—covering a 12-foot-tall cross with copper— and my father said he had found a receipt from that job. So we ran with it.” However, his sister did some more digging and discovered that in 1850 an ancestor was a tinsmith in Kennebunk. “Really, there’s a line of at least seven people since 1850,” says Brian with a chuckle. “My dad sold us short.”

In Jordan’s day, the business was a one-man operation located in downtown Biddeford. “He was a craftsman,” Brian says. “He worked with copper in his dress shirt and tie.” Jordan’s son-in-law Joe Haley apprenticed with him and eventually became a partner in the business, then named Jordan and Haley. By the time Joe’s son Tom (Brian’s father) came on board in the early 1950s, the company had moved to Route 1. The name was changed to Haley’s Metal Shop, and in 1959 they built the facility it still occupies today. The two-story administrative section of the building is surprisingly modern and bright, with pale gray walls and a sculptural stainless-steel stair railing that was made in the shop.

Like his father before him, Matt was not pressured to be part of the family business. He studied business management at Pennsylvania’s Bucknell University and met his wife, Susie, a native of New Jersey, in Australia on a semester abroad. He followed her to New York City after graduation, where he got a job teaching high school. “I started with a group of sophomores, and by the time they graduated, I was ready to leave, too,” he says. “I wanted to get back to Maine.” The operations manager at Haley’s Metal Shop was retiring and recommended him for the job. “I wanted to do something creative,” Matt recalls. “Someone had told my dad that running a small business is one of the most creative things you can do because of the decisions you have to think about and make and also how you have to adapt to everything that comes to you on a daily basis.”

As operations manager, Matt oversees the sheet metal department as well as the service division, Total Comfort Services. Brian, a mechanical engineer, designs and manages the company’s commercial and residential projects. Haley’s offers a diverse menu of services, ranging from fabricating and installing traditional HVAC systems to geothermal systems, heat pumps, and hoods for restaurants. They also service HVAC equipment and clean air ducts. Commercial projects are the backbone of the business, including the soon-to-open 43North restaurant at Spring Point Marina in South Portland, which “has a little bit of everything,” says Brian: heat pumps, rooftop units, and welded ducts. “My great-grandfather did nothing but metal; my grandfather added warm-air heating— he installed the first warm-air furnace in Maine—and my fatheradded air-conditioning, which my grandfather thought was crazy,” he says.

Air-conditioning is increasingly in demand, particularly in southern Maine, say the Haleys. “Today, we don’t eat at a restaurant that’s not air-conditioned, and we don’t go to work in an office that’s not air-conditioned,” says Brian. “Then we go home at night and it’s like, ‘Wait a minute, I’m dying here.’ Our comfort level is established by what we do all day long.” In older homes, Haley’s will often employ ductless units. “They’re very easy to retrofit for any space,” says Matt. Geothermal systems, which are operated by electricity, involve “creating a radiator in the earth,” Brian explains. “We either take heat away from the earth and push it into the building, or in the summertime, we remove heat from the building and push it back into the earth.” Haley’s Metal Shop’s offices are entirely heated and cooled with a geothermal system, and the company is now in the process of converting the nearly 150-year-old Dyer Library and Saco Museum to geothermal heating and cooling, replacing “old, behemoth furnaces that just guzzled oil,” says Matt.

Haley’s has more than 40 full-time employees, including some who have been with the company for decades. “There’s a lot of loyalty here, and we strongly believe in supporting them,” says Matt. “They’re our best asset; at the end of the day, they’re all craftspeople.” On a spring day in the shop, a dozen employees wearing Haley’s uniform shirts, safety glasses, and earplugs are working on a variety of metal-fabrication projects. Two men are pulling sheets of steel off a series of large rollers and feeding the sheets into a machine that creates edges where it will be folded to make a section of ductwork.

Father and son go out to lunch together every workday. “In my world, it’s a perk to have lunch with your son,” says Brian. He estimates he has another eight to ten years before he starts thinking about retiring. “Our goal is just to try to keep getting better, and the primary way to do that is to develop employees, which he’s pretty good at,” Brian says, smiling at his son.

Brian also attributes the company’s longevity to its diverse range of products and services. “We service equipment, we do air-duct cleaning, we fabricate specialty items—that all helps us during downturns in the economy,” he says. And if you’re looking for a copper roof, they’ll do that too, just like back in 1917. 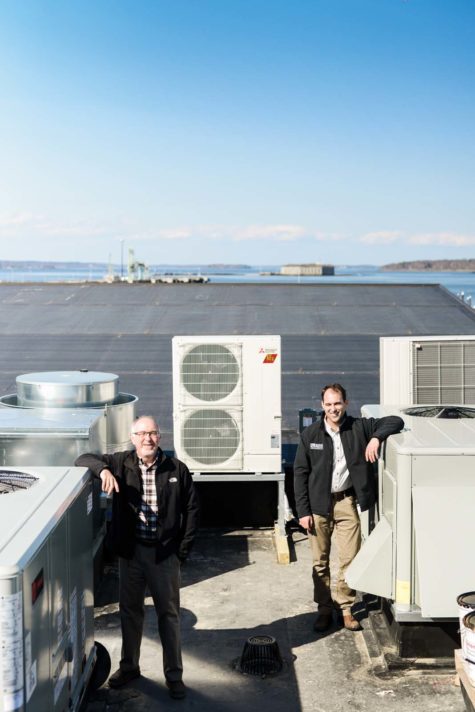 Brian Haley and Matt Haley of Haley’s Metal Shop on the roof of the new 43North restaurant at Spring Point Marina in South Portland, where their team installed the HVAC equipment. 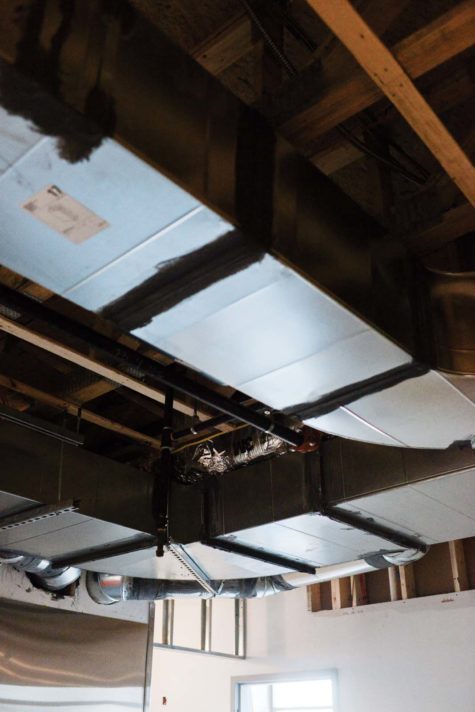 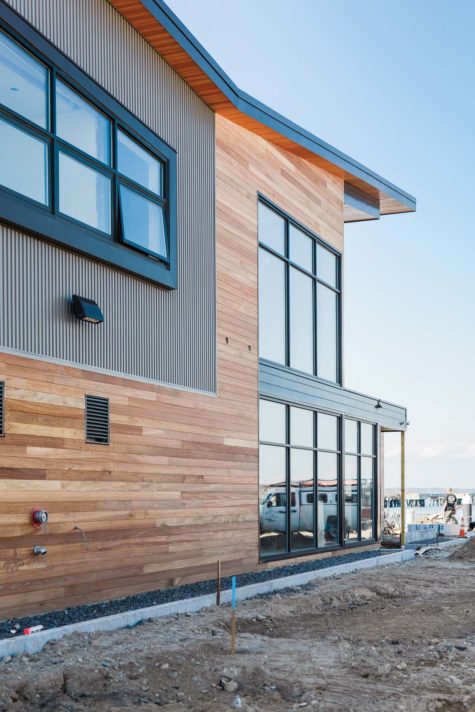