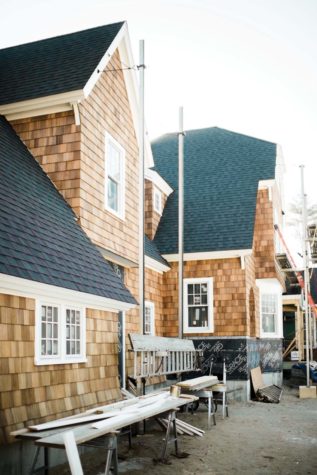 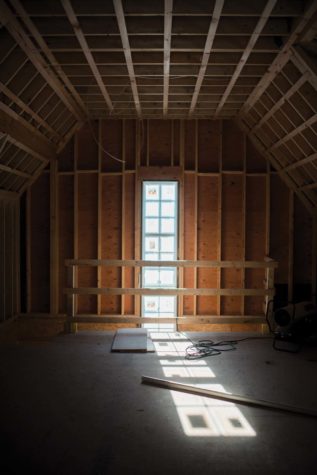 A new space Lord is finishing above a carriage house on his property. 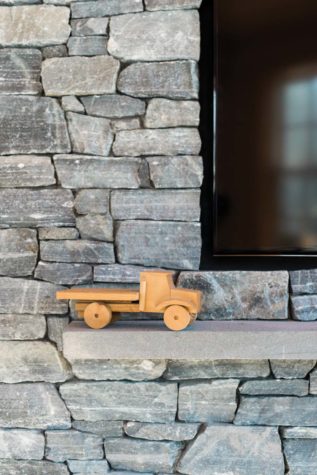 Lord made this wooden truck when he was a boy. 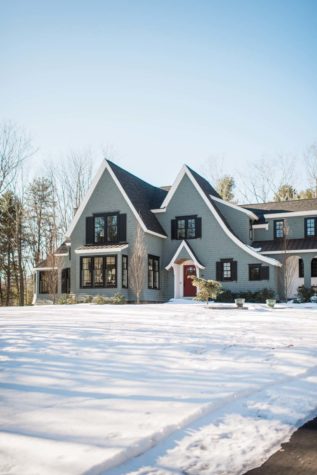 The rooflines and trim of the home Lord built for himself and his family reflect his fondness for fine woodwork.

In direct contrast to the stunning, richly detailed homes he builds along the southern Maine coastline, Kevin Lord’s office building on Route 1 in Arundel is an unassuming box. On the approach, the only key to its identity is a parked truck lettered with his company’s name, Thomas and Lord. Inside, among the cabinet door and moulding samples, a framed quote attributed to Franklin D. Roosevelt offers a key to Lord himself: “A smooth sea never made a skilled sailor.” Lord is more of a powerboat guy, but the words still aptly describe his path to success: he has ridden out the rough waves with hard work, tenacity, and a fearless ability to take risks.

Lord grew up in the western Massachusetts mill town of Chicopee, the middle child of three siblings whose father left the family when Lord was 12. His mother worked three jobs to keep their modest house; Lord and his brother Jim pitched in to help pay the mortgage by getting work permits in their mid-teens. “Our biggest fear was going to live in one of those horrible projects,” Lord says. From a young age, he spent his free time building things in a small wood shop in the basement. “When all the other kids were outside in the summer, I was down there,” he says. After graduating high school, Lord went to work for a custom homebuilder, eventually ending up on the crew that built a home for Kevin Thomas, owner of Maine Media Collective, who also lived in Western Massachusetts at the time. After eight years with the builder, Lord went out on his own as a skilled finish carpenter, and when Thomas bought a house in Kennebunkport that needed some work, Thomas’s friends suggested Lord. “He said, ‘Kevin who?’” recalls Lord with a laugh. Because Thomas had left for work before sunrise and returned after dark, the two had never met in Massachusetts. In Maine, however, they quickly bonded, and Thomas soon floated the idea of launching a home construction business here. Lord declined; he had just purchased an old mill as an investment property, and business in Massachusetts was good. A few months later, Thomas asked him to do more work on the Kennebunkport house. They had the same conversation, and even though things were slowing down with work, Lord again said no. “Then he called me a couple weeks later and said, ‘Look, if I don’t do this with you, I’m going to do it with somebody else.’ I sold my house, sold my business, sold my interest in the mill, and moved to Maine.”

That was in 2003. Originally named Welcome Back Cottages, Thomas and Lord became synonymous with fine homebuilding, especially in the Kennebunks, where the company thrived even after the stock market crash in 2008. “Right when the bottom fell out, a developer we worked with bought a big piece of land in Kennebunk that had all of these little cottages on it, Seagrass Lane,” says Lord. “They turned each one of them into a house, and we were the preferred builder there.” By the time the project was finished, the economy was turning back around. “We just kept on trucking,” he says. Thomas and Lord also connected with Kennebunkport real estate developer and hotelier Tim Harrington. “I built his last three custom homes, and 20 of his cottages at Hidden Pond [part of the Kennebunkport Resort Collection],” says Lord. Many of the homes the company builds are versions of the classic shingle style, with craftsmanship inside and out that reflect Lord’s fondness for fine woodwork and also give new construction a sense of timelessness. “We put our own interpretation into these houses, which I think makes them feel the way they do,” says Lord. “We get a lot of subcontractors who work for other builders and they say, ‘Nobody puts the detail into these houses like you guys.’”

In 2011 Lord bought his partner and friend Thomas out of the business, a move he acknowledges took a leap of faith. “I said, ‘I don’t know where this money is going to come from, but I’m just going to put my head down and drive.’” He has since expanded, relocating from a rented office to the building in Arundel, where he also runs a stone countertop business, Maine Marble and Granite. He also partnered with Larry Stoddard, owner of Distinctive Tile and Design in Portland, to open a location in Kennebunk. “It’s great because a lot of the people we work for will be here in the summer for two weeks with their family on vacation, but they need their house done next year, and we no longer need to send them to Portland for tile and to look at countertops,” says Lord. Not only does this make it easier on his clients, he notes, but “there’s some comfort knowing we’re all tied together.”

Lord is clearly proud of his close relationships, both with his subcontractors and with his clients, many of whom become friends following what are often complex home-building projects. “I spend a lot of time drinking wine and beer at all these stops during the summer,” he says. “They’ll call me out of the blue when I’m on my way home and say, ‘I know you’re getting done, why don’t you swing by.” One such client is John Mills, the retired president of the clothing retailer Aeropostale, whose framed letter hangs in Lord’s office. “Recently, Mary and I have been able to make several visits to our Crescent Surf project,” Mills writes. “As we traipse through our future home, we are enormously impressed by the workmanship and care taken with every aspect of the construction process.… The tradesmen, all, have affected their part of the building process with expert confidence and personal dedication.”

Dedication to his work and to building a good life is what continues to drive Lord. He, his wife Kelly (whose family owns Alisson’s Restaurant in Kennebunkport), and their three children “live in a great house that I never, ever thought I’d live in,” he says. The garage holds a deeply personal marker of his success, one that he is aware may be misunderstood. “When I first met Kevin Thomas, he had this Porsche 911 Carrera convertible, and I thought, ‘I want to be successful enough to be able, when I want something nice, to buy it,’ because Kevin worked his butt off for it,” Lord says. After he bought Thomas out of the business, Lord asked him to let him know if he ever wanted to sell the 2000 Porsche, and in 2017, he got the call. “I don’t want people to get the wrong idea because they don’t know the story,” he says emphatically. “The value isn’t what matters; my new truck cost three times as much as that car. It’s just the meaning of it—being able to buy one of my motivations.”

Even more motivating is the time Lord now gets to spend with his wife and children—winter weekends skiing and snowmobiling from their cabin in Bethel and summer days out on their boat, named Square Footage. His brother now lives in New Jersey and runs a division of the payroll company ADP. They’ve come a long way from their childhood, and Lord has never forgotten that. “I don’t think I would change anything, because it made us who we are and how hard we work,” he says. “If we don’t know the value of a dollar, nobody does.” 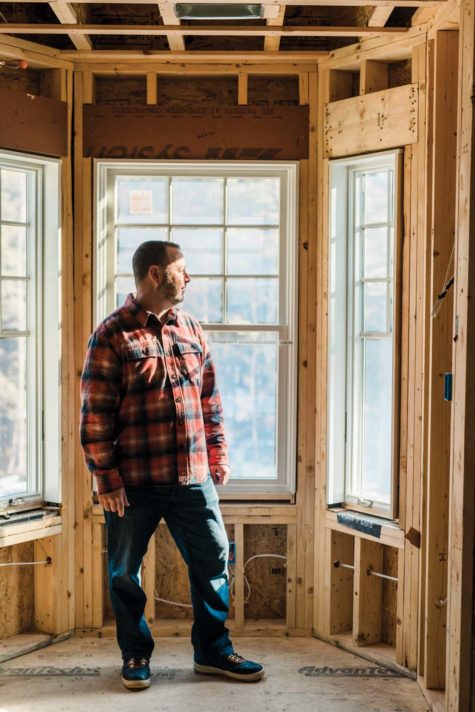 Builder Kevin Lord in the bay window of a Kennebunkport home under construction by his firm, Thomas and Lord.