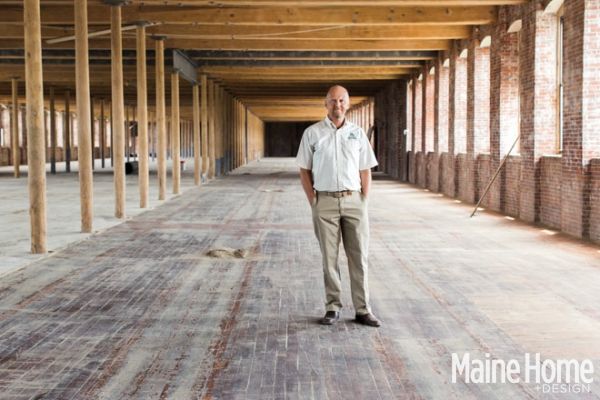 Jack McInerny in his element, surrounded by wood at the site of a potential new project.

When Jack McInerny moved to Portland’s Stroudwater neighborhood with his wife, Kathleen, in the early ’90s, it took him about five minutes to drive to work. Since then, seven stoplights have been put between his home and his business, Atlantic Hardwoods on Congress Street. Portland is in the throes of a renaissance, growing all the time, which is just another reason why a place like Atlantic Hardwoods is so special: little has changed about that sturdy, brick-red 150-year-old building at the end of Congress Street. While Portland moves and shakes all around them, straight shooters like Jack and Kathleen McInerny never go out of style. A Portland institution for decades now, Atlantic Hardwoods has been—and will continue to be—the recognized go-to spot for homeowners who want to build their floors with beautiful, good-quality, environmentally friendly, and locally sourced wood.

“Portland is a really cool city because a lot of people get that these things matter,” says McInerny. “They are here for that. They’re coming for that.” And when it comes to selling wood in Maine, “local” makes environmental as well as economical sense. “We’ve always focused on Maine products. Some of the flooring is coming over from Quebec, which is still very close by. And you can do it for the same price as buying some junk from China. Can I say ‘junk’?” he asks, with raised eyebrows and a smile.

Those who have built or renovated a house are aware of the options when it comes to flooring. There are the engineered wood floorboards, the veneer variety, and even the kind that aren’t wood at all but rather a photograph of wood transposed onto plastic. Walking into the Atlantic Hardwoods building, the sawdust smell tells you what you need to know: Atlantic Hardwoods is all about the real stuff. In fact, the showroom is a kind of temple to wood. The floors are lined with planks of varying colors, lengths, widths, textures. Arranged on the walls are wooden squares in every color imaginable—from pale neutrals to auburns to amber tones to stains as dark as coffee (which are very in right now). While McInerny introduces me to all the options—the different textures and grades and various VOC-free finishing products—Kathleen chats with a homeowner nearby. “What is it you always say?” Kathleen asks Jack at one point, fishing for a particular phrase to share with the customer. “A good clash is better than a bad match,” rolls off of Jack’s tongue, and then he goes on to recall a decision he and that customer made when working on an earlier project together.

Working with people is one of McInerny’s favorite parts of the job. The Somerville, Massachusetts, native studied forestry at the University of Massachusetts and, after graduating in 1984, worked in the Maine woods for a while. “I worked for a lumber company selecting trees to harvest, which was fun, but that’s a lot of time alone in a truck, and I like people too much for that.” When he opened Atlantic Hardwoods in 1993, the focus was on selling cabinetry supplies. The company continues to sell these, along with top-notch finishes and interior wood products like handrails and countertops, but today it is flooring that makes up roughly 50 percent of the business. Jack and Kathleen work with about 14 employees, as well as Jack’s father, who at 82 still spends a few days a week at the store. “He’s phenomenal,” says Jack. “He retired the day I opened up and he’s been here ever since.”

McInerny spends time hunting and fishing with his father in western Maine when he gets the chance, but he can’t imagine not working. “I’m really passionate about this stuff. I just love it,” he says, running his hand over a table made of a birch plank with a beautiful natural edge that he square-cut and finished and set on a pair of industrial steel legs. Knowing wood well is a science, but it’s also an art. In 2012, when the Portland Museum of Art renovated Winslow Homer’s studio on Prouts Neck, they asked McInerny to head up the painstaking task of restoring the floors. When not on special projects like these, McInerny spends his days visiting job sites, meeting with customers and general contractors.

Outside of work, the McInernys don’t slow down. Kathleen works on behalf of the organization Operation Christmas Child, helping to collect and disperse gift-filled shoe boxes to kids around the world during the holiday season. Once a week Jack helps cook and serve meals to folks in the Deering neighborhood who might not eat otherwise, and he and Kathleen take mission trips, building schools and serving in churches around the world. “I love to travel,” he says, “but I’m always happy and grateful to come home.” Every Thursday evening, equipped with pizza and a pack of cards, Jack spends the evening with his son and his roommates in South Portland. While exceedingly bright, his son has Asperger’s syndrome, which makes certain aspects of college life difficult for him. In 2013 the McInernys bought and renovated a home near the Southern Maine Community College in South Portland, which they rent to other SMCC students from around New England who are facing many of the same challenges as their son. Jack speaks with visible pride about how well this group of young men is doing in this largely independent setting. Now that he’s seen how well this model works, he hopes to help establish similar college housing options in other locations around Maine and New England.

Walking through the warehouses and workrooms of Atlantic Hardwoods, where a mask-clad pair is cutting a beautiful piece of hickory for a restaurant countertop in Portsmouth, McInerny and I talk about gratitude. We talk about abundance—about how the more you do the longer the day becomes—or seems to become, which is really the same thing. McInerny’s inclination is always to act. At every step, he’s doing everything he can for his family, his community, his business, and his friends. “I just try to shine light where I can,” he says, and so he does. 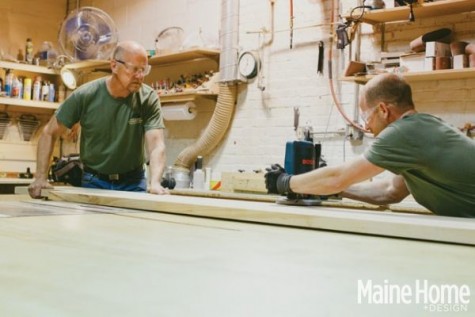 Jack McInerny and Jason Paquette at work on a countertop. 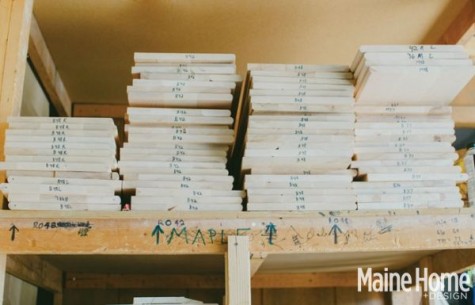 A stack of treads made of native Maine sugar maple. 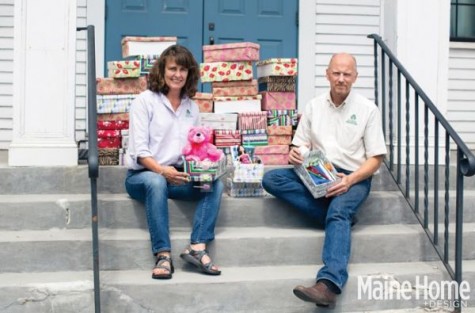 Kathleen and Jack McInerny sit on the steps of the Stroudwater Baptist Church, surrounded by gift boxes to be sent around the world through the organization Operation Christmas Child.