From Forest to Sea

Made from Maine-milled lumber in an old barn in York, Grain’s innovative surfboards are an architectural feat 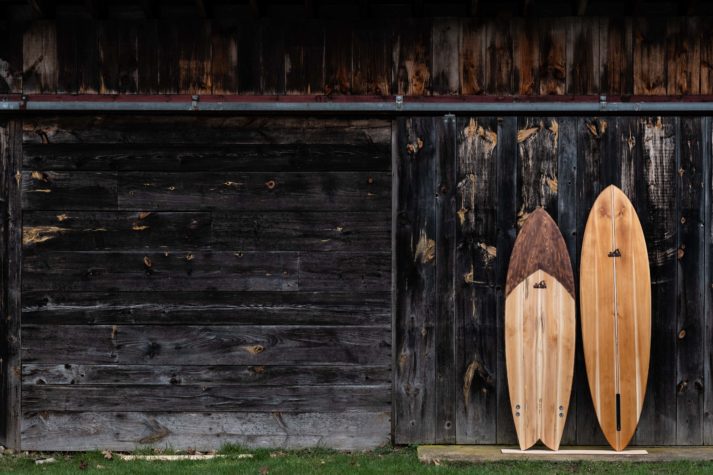 Grain Surfboards in York makes recreational vessels from Maine-milled cedar. These two boards are prototypes for a new line, coming out in 2019. 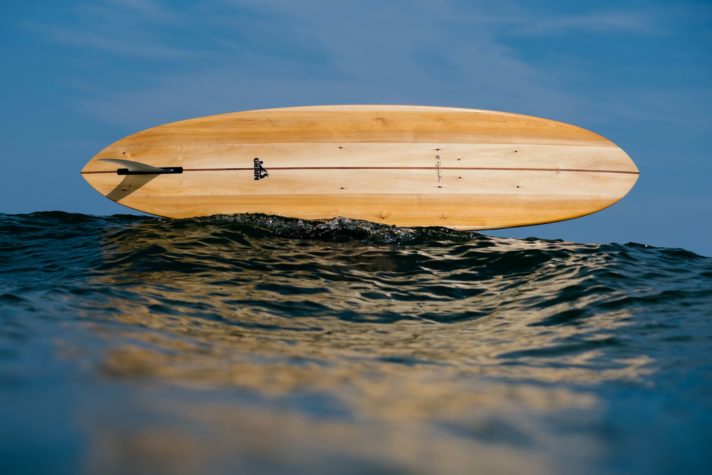 The Thick Lizzy board was created as a collaboration with California shaper Ryan Lovelace, who works primarily in foam. “Most of the time, when we do collaborations, it’s with guys who shape in foam. We can offer the same model in a different material,” says Lavecchia. 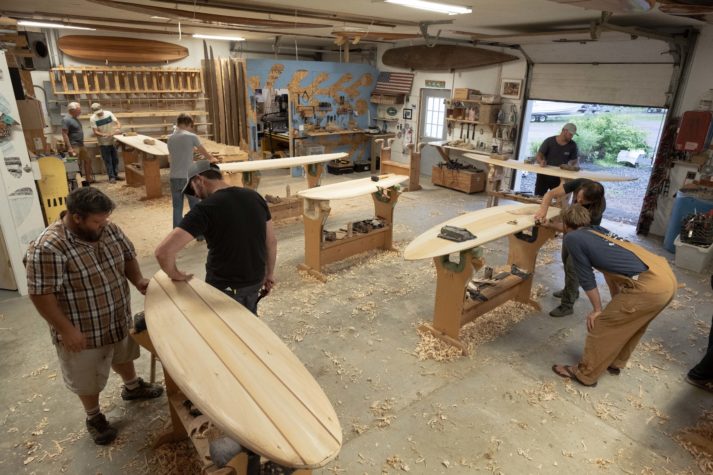 A scene from a summer workshop at Grain. 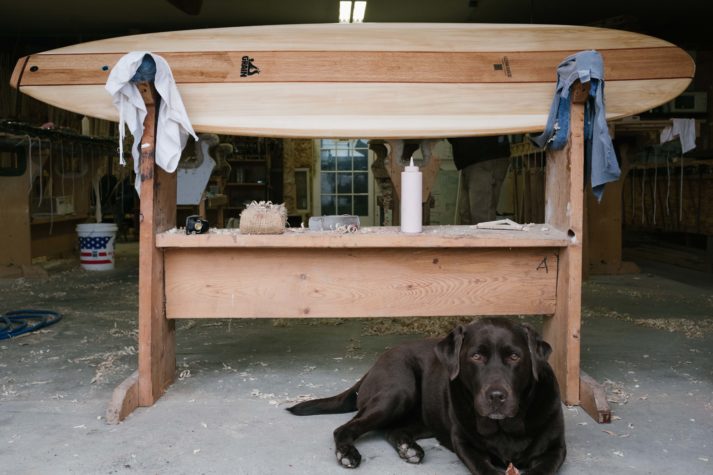 Charlie, who belongs to Mike’s brother Nick, spends her days in the Grain workshop; “We sit down for lunch, and she comes walking around the corner,” says Lavecchia. 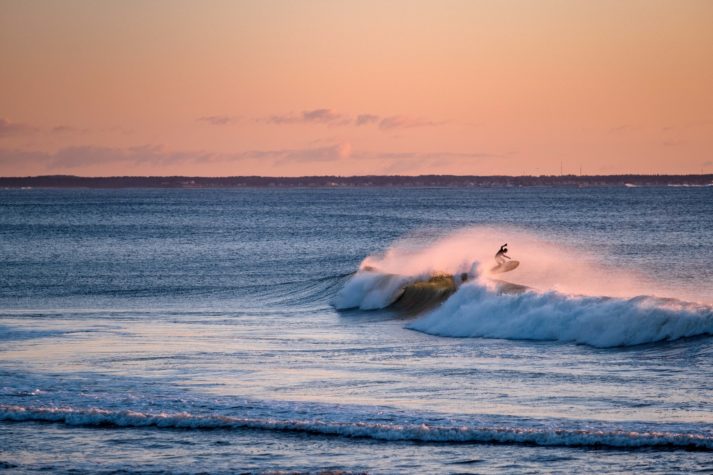 Nolan Collins, “workshop guru” and teacher at Grain, goes out for a surf in southern Maine. 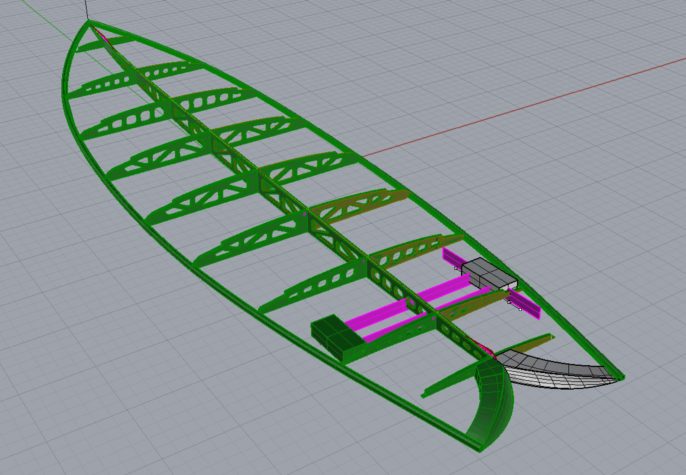 An interior rendering of one of Grain’s new fish shapes, created by Booth. 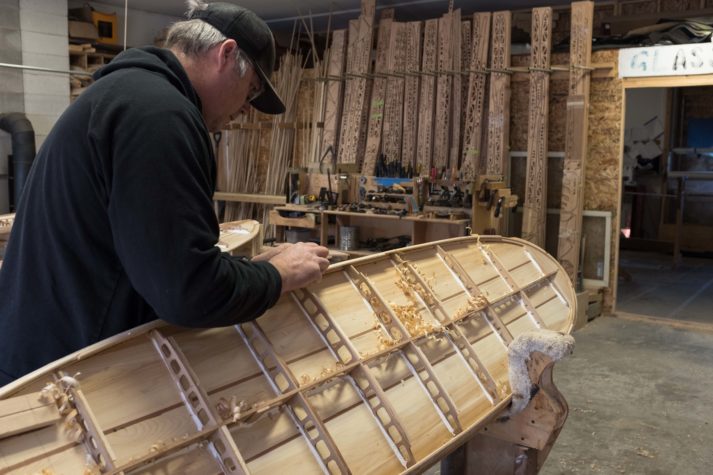 John Hamblet, lead board-builder at Grain, works on the interior of a board. 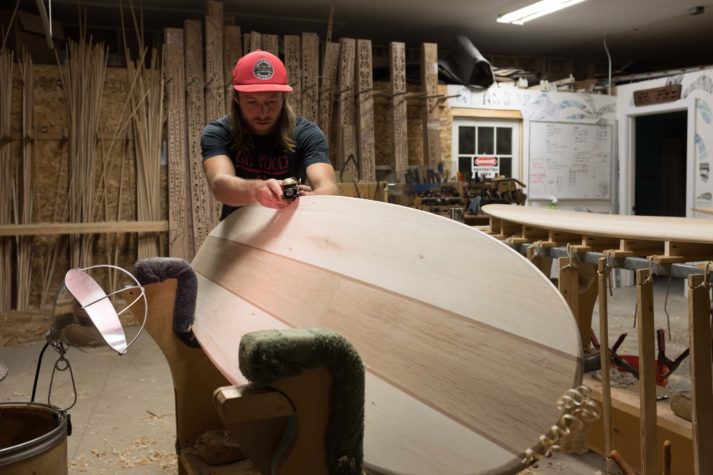 Almost there: Nolan Collins uses a Lie-Nielsen block plane to shape the rail of a board.

Grain Surfboards was inspired by a tree. Or, to be more specific, it was a native species of coniferous evergreen that made Mike Lavecchia want to begin building wooden surfboards. He was introduced to Thuja occidentalis, commonly known as northern white cedar, when he was working as a boatbuilder in Burlington, Vermont, overseeing the creation of an 88-foot schooner for the Lake Champlain Maritime Museum. This particular project took three years to complete and required lots of white oak and black locust and other dense (and historically accurate) materials. For anything that needed to be light, they used Maine northern white cedar.

“I fell in love,” Lavecchia says, some 15 years later. “I hadn’t worked with a lot of cedar, and it felt different to me. It was easy to work with, it smelled nice, it was light and stable and resistant to decay and rot.” This period of his life also happened to coincide with a newfound interest in surfing. Lavecchia had begun joining a few surfer friends on trips to the Maine coast. On the weekends he went out to ride waves, and during the week he spent hours sourcing wood and managing materials for the replica schooner.

When you tell the story this way, it almost makes it sound like building wooden boards was an inevitable outgrowth of Lavecchia’s interests. And it was, to some extent, but wood wasn’t a common material for surfboards in the early 2000s, and it still isn’t. Most surfers prefer foam and fiberglass boards, which are more readily available in surf shops and easier to construct. Making a business of building wooden boards was an offbeat idea. “Back then, friends of mine were getting into making their own foam boards,” he says, “but I didn’t find foam at all appealing. I would never have bought a foam blank and tried to make a board.” He did, however, like working with his hands, and he had years of previous experience working in boarding industries—skate and snow—so he knew his way around the general concept. “I started to do some research on surf history and construction, and I realized that it was very parallel to wooden boats,” he says. “For hundreds of years, people used wood to make surfboards; it was all they had.”

Surfing predates the arrival of Europeans in the Americas, in fact. People in Polynesia and Hawaii had been surfing for centuries by the time Europeans came along. In Hawaii surfing was deeply woven into the fabric of the culture and religion. Native Hawaiians called it he’e nalu, or “wave sliding.” They rode long boards made of both softwoods and hardwoods and shaped a bit like tongue depressors, with a curved nose at the front and a long, blunt tail at the back. People didn’t begin building hollow surfboards until the 1920s, when an engineer named Tom Blake began creating hollow wooden surfboards. “He came up with the method of building boards with a skeleton inside the board and a skin of cedar on top,” says Lavecchia. “It was a huge advancement at the time.” Wooden surfboards fell out of fashion, however, as petrochemicals became more readily available, and for much of the twentieth century surfers defaulted to foam and fiberglass. This started to change in the early 2000s as it became more and more obvious that petrochemicals are doing damage to the ocean in a big, big way. In many ways Lavecchia was an early adapter. In 2005 he made the move to Maine and built his first wooden board. Lavecchia realized fairly quickly that that there was a market for this kind of product. His fellow surfers were very interested in trying his board and in creating boards of their own. This group of wood-curious surfers included

Lavecchia’s friend Brad Anderson, a former boat-builder and craftsperson. At the very beginning, Lavecchia brought Anderson on board to help manage the business. Lavecchia founded Grain Surfboards in York, casting himself in the role of “chief thinker and tinkerer” (according to his bio) while Anderson worked to streamline and standardize the design and construction process, manage workflow, and implement systems and procedures to help the company run smoothly. Over the next decade, Grain slowly grew from a tiny custom board company to an eight-person team operating an educational workshop and retail destination that sells a variety of standard boards (fish, mid-range, long board, big wave, and others). Grain boards range in size from 5 feet to 12 feet, and they even sell a small collection of body boards (which measure in the four-foot range). Some of their boards are thick and fat, some are thin and lightweight. Some of the boards have pointed noses and forked tails, others are round all around. Although some of these designs are particularly graceful, none of these choices are purely about aesthetics. They’re practical vessels, each one made to facilitate a certain kind of ride on a certain kind of wave.

What Lavecchia and his team at Grain are doing, he explains, is a kind of “re-evolution.” They’ve taken surfboard construction “back to a time when Tom Blake was designing surfboards, where wooden surfboards left off.” Lavecchia continues, “Then, we’re bringing in all the modern thinking, design elements, and shapes of modern surfing.” Like Blake, Grain creates hollow boards with wooden skeletons. These interior supports are created using CAD software and cut with a CNC (computer numerical control) machine from marine plywood. The exterior shell is made of northern white cedar supplied by a lumber mill in Portage. (Grain has been using the same mill the entire time they have been in business.) “Unlike most surfboard companies, Grain isn’t carving out of a big foam blank. It is an additive process, not subtractive. You have to have the frame designed before you can build the board,” explains Ascher Booth. Not only does Booth surf, he’s also a licensed architect who helps the team at Grain design and build boards. “I was brought on because I could use a program called Grasshopper,” he explains. “It uses new scripting and algorithms to streamline a process that was very manual before.” Members of the Grain team will come to Booth with a shape they want to explore, and Booth will scan it into the program and figure out the precise dimensions of the wooden frame. Even though Booth has moved to New York City, he still works regularly with Lavecchia. “Grain is a company I have always loved,” he says. “They feel like family members at this point, and it would be hard for me to imagine not having that as part of my life.”

Booth will continue to be integral to Grain’s success as they launch new lines of boards. “We just came out with three redesigns,” says Lavecchia, “and we’re going to go through our shorter boards soon and revamp those.” He’s been experimenting with one-off shapes and designs, and figuring out how to offer a larger variety of surfboard styles for his customers. He also hopes to bring in more surfers and show them how wooden boards can be just as nimble as foam boards. “People assume the lighter, the better, but that’s not necessarily true—sometimes you need a bit of weight for it to perform right,” he says. His ultimate goal is to keep creating the sustainable, beautiful objects that he loves. “We’re building boards that will never see a landfill,” Lavecchia says. “And Grain isn’t just me. I couldn’t do this alone. It takes a village to do this kind of work.” 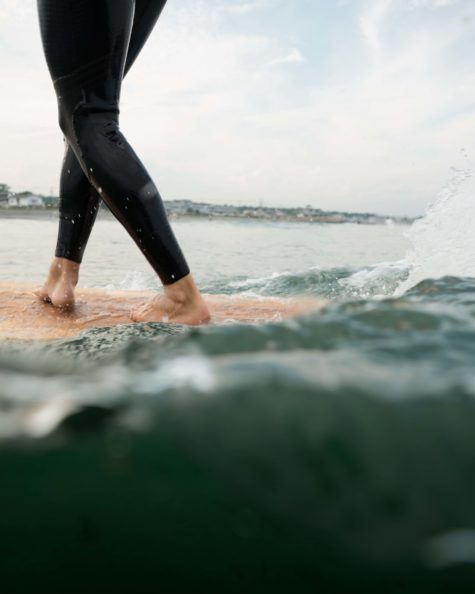 Surfers are very protective of their beaches. Here, one of the Grain crew surfs off the coast, “south of Portland,” explains Lavecchia. “That’s all I’ll say.” 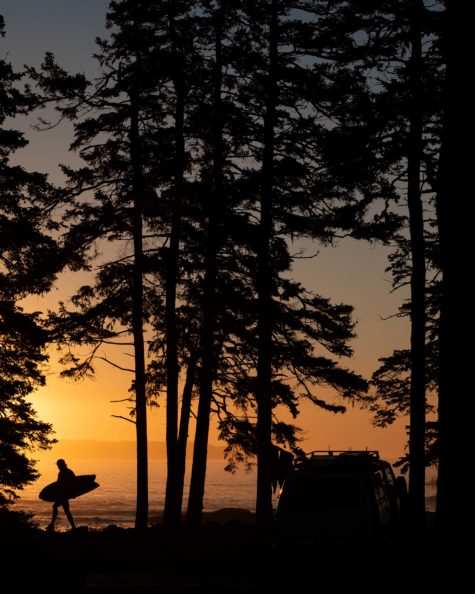 Grain is made up of surfers and sailors, boatbuilders and architects. 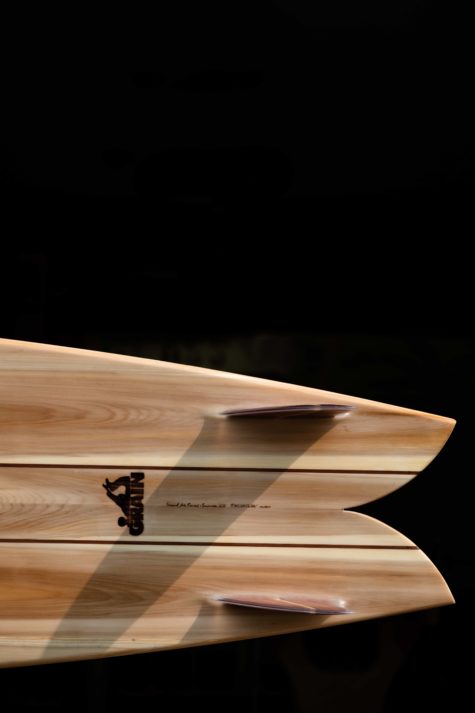 The Waka board is a fish short board with a swallowtail, designed for “waves that don’t have a lot of push,” explains Lavecchia. “It’s a versatile board for a number of different conditions, but sort of a retro style. And one of the first shapes we ever made.”