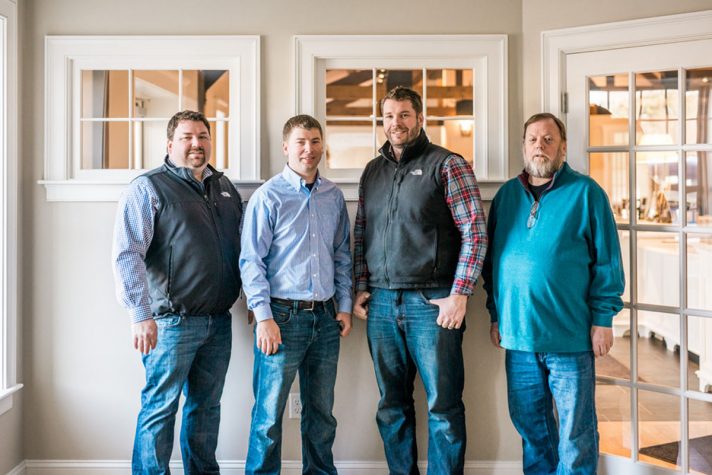 Jon, Richard, Josh, and Jason Moody pose in their showroom, located in a former Dexter Shoe Company building in Wells. The pine trusses are original to the building; the fireplace is a Heatilator gas unit with a fieldstone surround and a granite hearth and pine mantel reclaimed from a restoration project. 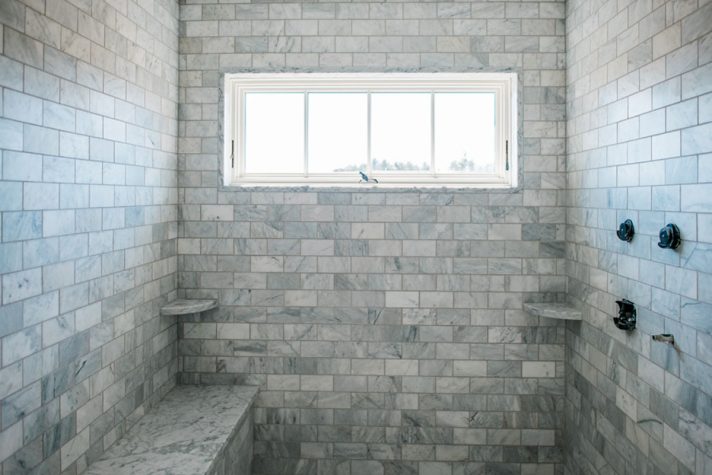 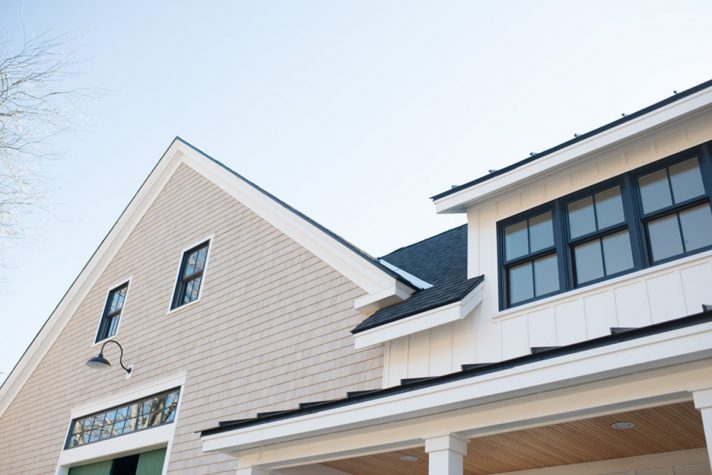 On the building’s exterior, the company married a new, modern farmhouse with an existing antique barn.

For nine decades, Richard Moody and Sons has been building quality homes on the Maine coast. Josh, Jon, and Jason Moody share the secrets of their family’s longtime success.

In the 1930s, Roy Moody began building houses for his neighbors in his small seaside town. He was also a farmer and the owner of the Wells general store
on Route 1 at a time when the road was tree lined and flanked by homes and businesses set atop grassy expanses. Now, of course, Route 1 is a busy highway, the tourism arterial of the state. The general store no longer stands. But the Moody family has stayed constant, passing down knowledge—and Roy’s homebuilding business—from father to son.
The company grew exponentially under Roy’s son, Keith, who handed it off to his son, Richard, in the early 1980s. Now located in a gabled, shingle-style building on Route 1 and named Richard Moody and Sons, the business is operated by Richard and his three sons, Josh, Jon, and Jason; their sister, Megan, works in the office. The family manages a team of approximately 20 employees, who specialize in everything from excavation to custom millwork. “I grew up going to job sites with my dad,” recalls Josh, the eldest son, who has been working for the family business since his graduation from Bates College in 2002; Jon and Jason followed the same path, graduating from Bates in 2004 and 2006. “I would play with any tool I could get my hands on, and ride in any machine they’d let me.” Now, his three kids (ages six, three, and one) do the same. “My six-year-old has quite a tape measure collection going,” says Josh with a low laugh. “Every time he gets in my truck he walks out with one. My guys joke that I have to buy a new one every week.”
Josh, Jon, and Jason and their respective wives have a total of eight kids under eight: seven boys and a girl. This bevy of Moody children and adults forms a tight-knit cluster, a family who works together during the week and plays together on weekends. The families share a camp on Little Sebago Lake, and their kids participate in the same sports. Soccer, basketball, baseball—“you name it, they want to do it all,” says Josh.

I ask the brothers whether they ever argue, or whether they ever have difficulty designating tasks. I imagine working with my two brothers and the disaster that would result. “That’s really not how we are,” says Josh. “We don’t have a CEO or CFO or anything like that. I think part of this comes from how we were raised and how we were taught to do things. We’ve created a team.” The brothers’ work ethic, which Jason calls “the greatest thing our father passed on to us,” trumps ego and sibling rivalry. “We all want the same thing: to do good work and to do it right the first time,” says Josh.

One reason the company has endured through the booms and busts of the twentieth century, thriving even during the recession of the twenty-first, has to do with Richard’s steady guiding hand, as well as the company’s four-for-the-price-of- one ownership structure. “We believe having multiple family owners gives us a value that you can’t put a price on,” says Jon. “Each of us brings an owner’s perspective to each step of the process, from excavation, which we do ourselves, to the finish work and cabinetry, a lot of which we do ourselves.” While the brothers do not have official duties—they prefer to work collaboratively on almost everything—they admit that each as a slightly different strength. Josh, for example, is great with excavation work, something that has fascinated him since childhood, and with permitting, which is key in a coastal community, where regulations change frequently. “Even when he isn’t acting as the project manager, we go to Josh for help with environmental permitting and planning,” says Jon, who is particularly skilled at carpentry. “If I have a question about a roof pitch or a staircase, I know Jon can answer it,” says Josh. While Jason also manages his own projects, he spends a lot of time in the office, putting together contracts, preparing estimates, and managing the budget.

The family’s egalitarian approach applies to their project selection, too. “We work for everybody,” says Josh. “To us, it’s all work, whether it’s creating someone’s huge dream house or adding a small addition to a home to help that family accommodate a new member.” The company is also a member of the U.S. Green Building Council, and last year they worked on a LEED Gold–certified home. On this project, they focused on issues like making sure the building was airtight by taking steps during the framing process to keep warm air inside the home, installing spray-foam insulation, and using blower- door tests to measure how much air was escaping around window and door frames and between cracks. “We also implement many of these practices in projects that aren’t going for certification,” says Josh. “It saves money in the long run, and it’s just logical.”

Josh’s own house in Wells, which he designed and built in 2010, is a physical embodiment of the Moodys’ open and inclusive ethos. “I wanted a place for birthdays and family parties, where everyone in our extended family could talk and feel like they’re a part of the event,” he says of the home’s expansive kitchen- dining-living area dotted with plush couches and large tables. That extended family is a considerable crowd: cousins, aunts, uncles, and kids can easily fill the space with more than 50 people. In the kitchen, Josh’s wife, Jen, commands the perimeter countertop areas with the oven and sink, while he mans the giant central island, which has a smaller bar sink. The setup allows the couple to split prepping and cooking duties and “gives me a place to make my own mess,” he says with a laugh. Preparing a meal amidst the chaos of a full house, Josh is in his element. As he puts it, “the best things happen when we’re all together.” 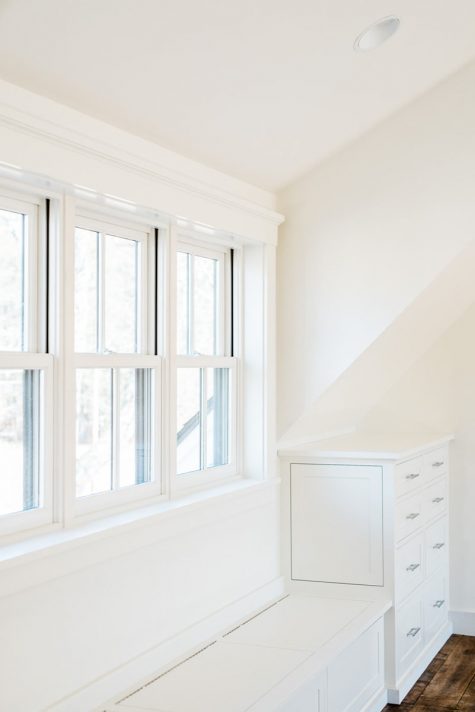 A built-in window seat and dresser grace an in-progress owners’ suite in Wells. 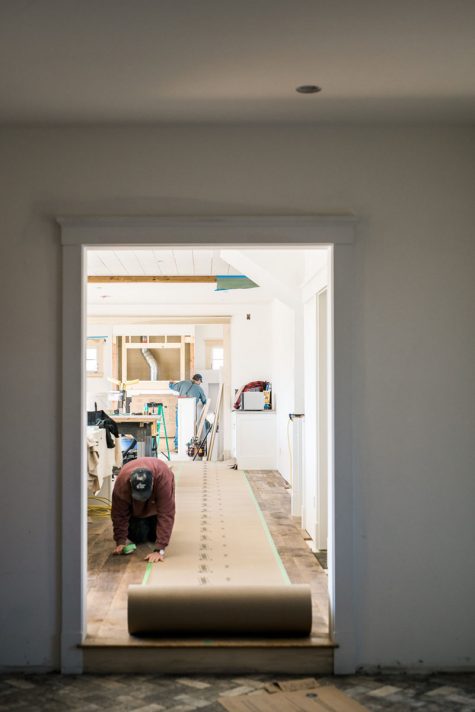 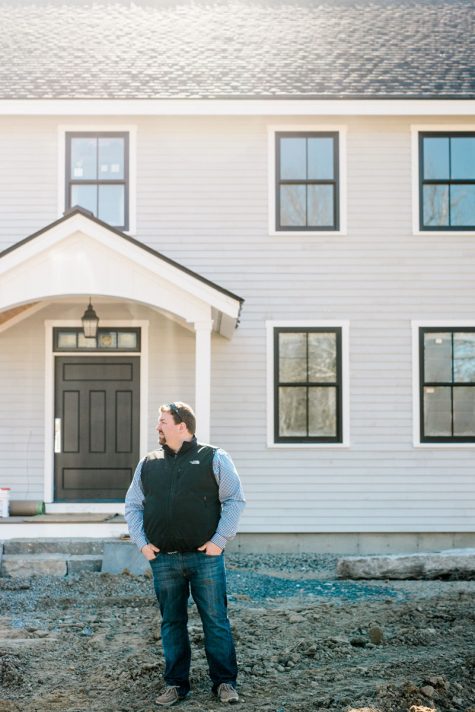 Josh stands in front of the modern farmhouse the company recently completed.