All the Better to Hear You With 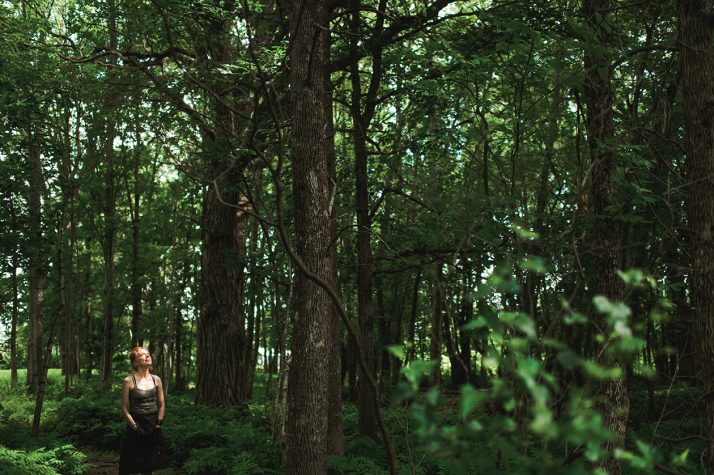 Painter and author Lucky Platt stands in the woods near her home on Unity Pond. 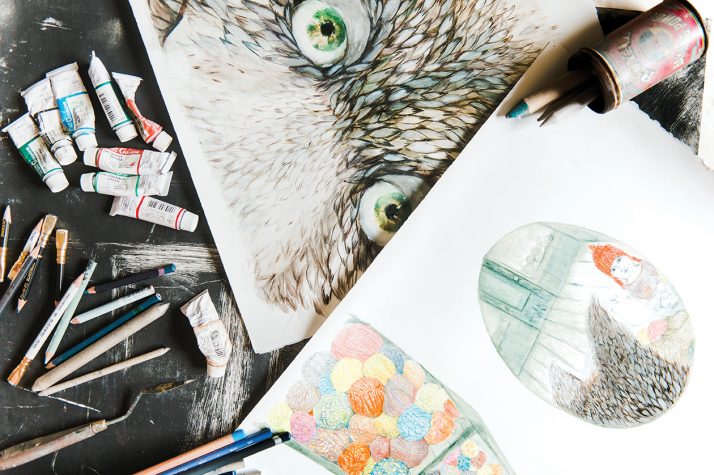 Platt works in a variety of mediums and often combines painting with drawing and sculpture to create unique animal works. 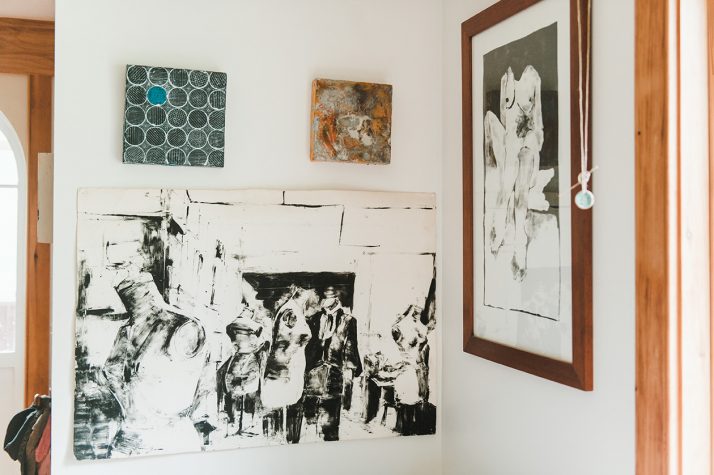 Platt lives in a passive solar house that her husband built almost entirely by hand when he was 25. 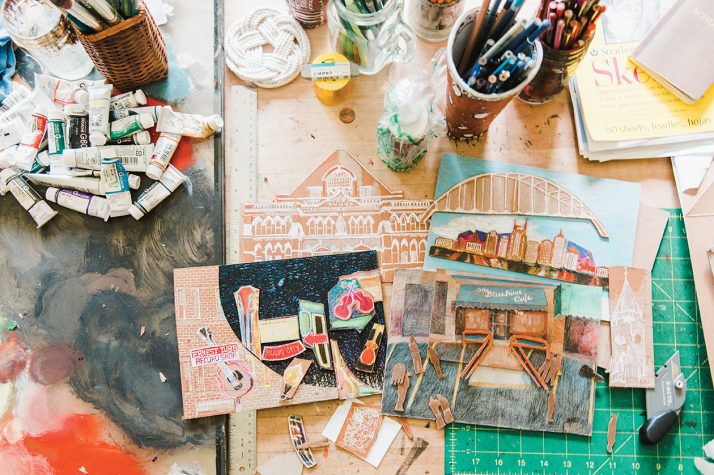 While Platt spent much of her adult life living in cities, she’s come to realize how much her childhood in Pennsylvania shaped her sensibilities; Maine feels, in some ways, like a return to the woods of her past. 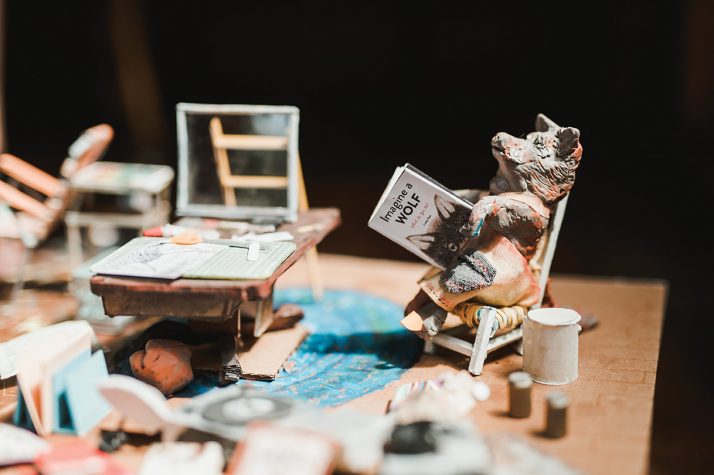 She created the persona of “Lucky Platt” in 2010, when she was playing around with dioramas and short videos. Lately, she’s been working on a yarn about Cat, and someday she expects to introduce her readers to Dog. “There’s a dog story in me somewhere,” she says.

Lucky Platt was at Haystack Mountain School of Crafts when she met her wolf. She had been thinking about them for a bit, mulling over ideas about these “hairy creatures” she had been making. Sometimes, she would paint bears, which usually went out as gifts to family and friends. They were “protective beings,” she explains. “I made them big, and whenever I made one, I usually had a specific person in mind.” These bear paintings were gifts intended to bring good, healing energy into a house. But Wolf was a bit different. It was a character in a story she had been telling herself. At Haystack, Platt remembers, she realized that Wolf wanted to talk. And Wolf wanted to talk to children.

Platt’s first children’s book, Imagine a Wolf, tells the story of this generous, hopeful creature in beautifully colored fine strokes. The images were created using oils, pencil, and pen—Platt has always been a flexible artist, dipping from one medium to the next—and have a soft, painterly quality that reflects the inner life of the soft-hearted canine. “I had imagined this creature a few years ago, and I couldn’t let it go,” she says. At first, Platt didn’t know Wolf was destined to be the star of a picture book. It was clear that Wolf wasn’t as fulfilled as her bears. Wolf was sad and misunderstood. “I kept thinking, what is this burden? What is the weight the wolf is carrying? I realized that the wolf existed for me in between the majestic beautiful wild animal world and the fairy tale.” Wolf, Platt says, “gets hurt. Someone calls Wolf a name, and you can see that Wolf is hurt. But Wolf gets up again.”

Her two-week immersive stay at Haystack (studying under acclaimed installation artist Lauren Fensterstock) helped Platt realize who Wolf was, what Wolf wanted to say, and where her own work was leading her. “I look back on what we did in the workshop, and the seeds of my book were all there,” Platt says. In particular, she recalls a mind map of artistic influences that Platt filled with “hairy beings.” They weren’t quite fine art, and she knew that. But they weren’t not art, either. “Lauren was the one who made me realize that your art practice doesn’t have to be divided,” Platt explains. “It’s not gallery practice and this other work. There’s no need to think of yourself as if these things are in conflict. It’s all you.”

It was this integrated outlook, combined with the strange stressors of 2020, that led Platt to embrace her studio practice and leave her long-held (and much loved) day job at Maine Crafts Association. She’s always been an artist, but for decades she tended to think of her artwork as something she had to financially support, not something that would financially support her. Before she moved to Maine, Platt spent years living in cities—New York, Chicago, Madrid, and others. She always painted, but “money was such a focus. I thought of it as my studio habit.” In 2020, after working for several years as the program manager at MCA, Platt was furloughed. That gave her the push she needed to do a “deep dive” into creating her own art and telling her own stories. “It was hard because I love the Maine Craft community so much. It’s so much a part of my Maine story,” she admits. “Realizing that there are so many people who practice craft and make a living, even if it’s a modest living, that changed me.”

Platt is still connected to the Maine craft scene, both through her artistic work and through her personal life. She remains close with Sadie Bliss (the recipient of one of her bears) and is married to woodworker and master luthier James Macdonald. She lives and works on the shores of Unity Pond in a passive solar home built by Macdonald on a piece of family land. “This sounds so luxurious, but I actually have two places I work,” she says. There’s a studio in the main house, plus a little bunkhouse where Platt does her larger-scale work. “In the past year, when I’ve been doing my online events with the book, I built a set in the space with cardboard,” she says. “It’s been a lot of fun interacting with that.”

The cardboard set harkens back to her work building dioramas and constructing the “Lucky Platt” identity, a project that began in 2010. At first, this was a private endeavor. “I thought of it as a whimsical narrative children would enjoy. It was this little world I built. An imagined studio space I built. In this little diorama-sized world,” she says. She always imagined that she would have children, until relatively recently. “I got to a point where I realized children weren’t going to be a part of my life,” she says. “I turned 40, and it was like, huh.”

But, talking to Platt, she seems at peace with everything that brought her here, to this current life as a children’s book author and illustrator. After all, she spends a lot of time with children, including her one-year-old step-grandchild, plus all the kids she speaks to about her book. Like Wolf, Platt has things to talk about with kids, lessons to share. She’s fought cancer twice—in 2012 and again in 2016—which helped reveal her inner resilience. “I wasn’t thinking this when I was writing it,” she reveals, but the experience is “definitely in there.” With her first book, she wanted to tell children that “resilience is a way to overcome something hard. It’s something I think about a lot, how much I value resilience, and what I want for others.” Her next book might be more explicit, but even in the fun, silly story about a sweater-loving, touchy-feely wolf, Platt has embedded a deeper meaning. Resilience, she says, “is a possibility for anyone. It’s there for you.” 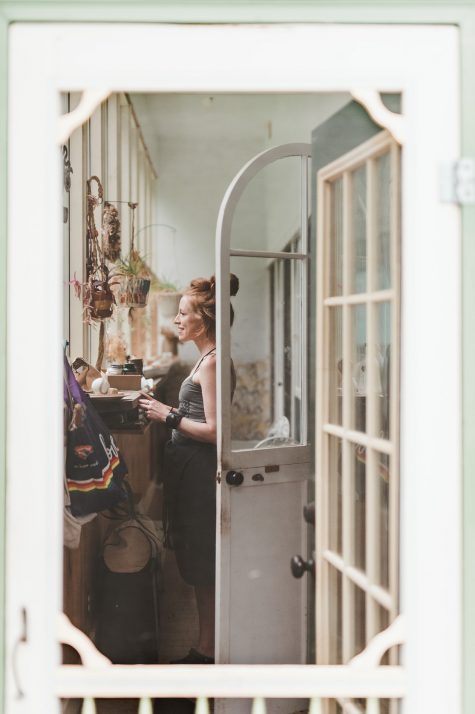 Sometimes Platt works in the bunkhouse, and sometimes she goes into her studio in the cabin. “It feels so luxurious,” she says, to have two workspaces. 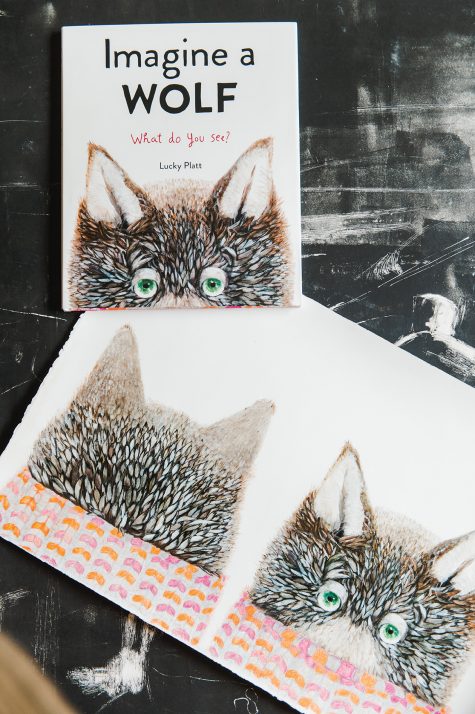 Her first book, Imagine a Wolf, has connected the lifelong artist to a new group of viewers: children, who she says are some of her favorite people to connect with. 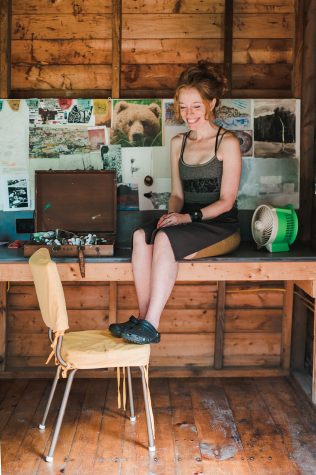 During a class at Haystack, Platt realized that she was drawn towards depicting “hairy creatures,” including wolves and bears. Each character she makes has their own qualities—some are creative and sensitive, others are protective and nurturing. 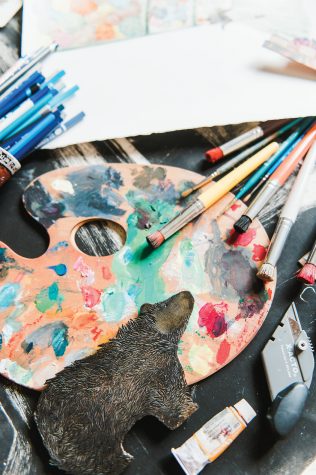 “I find that the work tells me what it needs to be,” Platt says of her mixed-media approach.