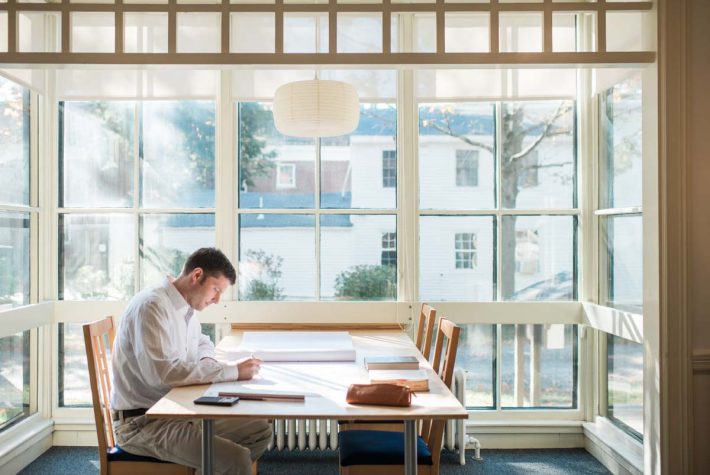 Structural engineer Albert Putnam works on a drawing in his Brunswick office. Because his small firm focuses on residential rather than commercial projects, he is a sought-after resource for architects and builders working on large, complex homes. 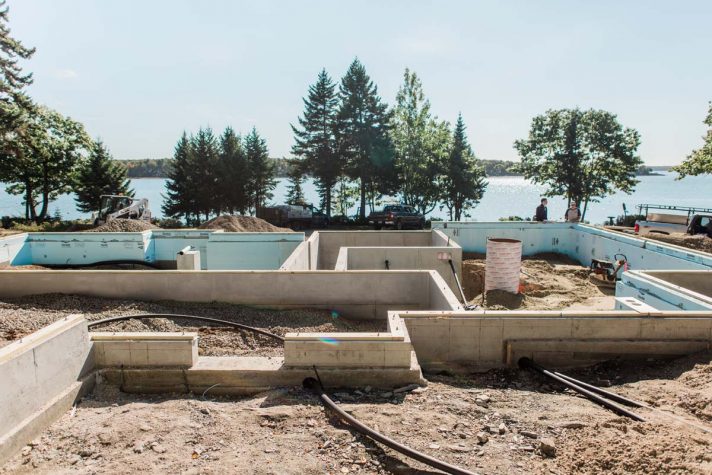 Putnam’s services include visiting sites, like this one on Casco Bay, to help ensure all runs smoothly, which can be especially important when the owners or design professionals are not local. “There are occasional site conditions bedrock for example—which require slight adjustments to our specifications,” Putnam says. “We look at components and assemblies to make sure it goes together as intended and that loads cleanly stack from roof to foundation.” 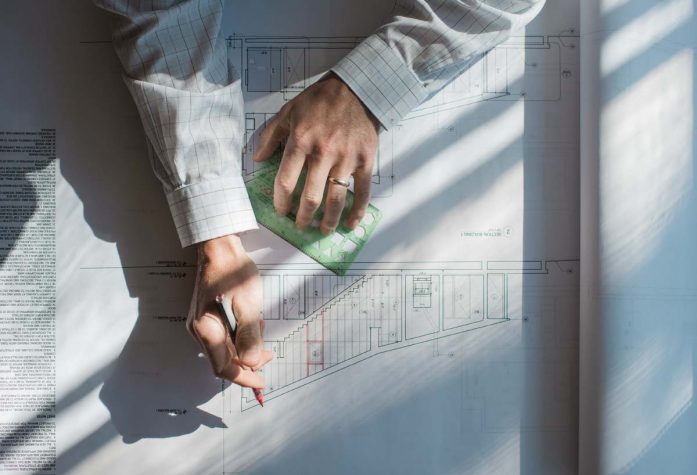 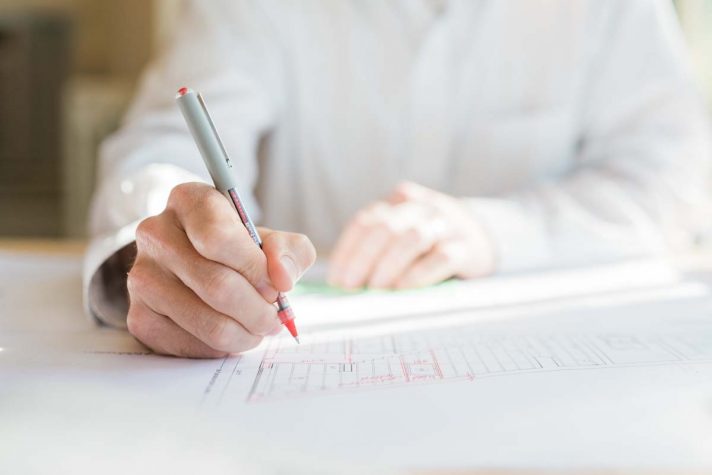 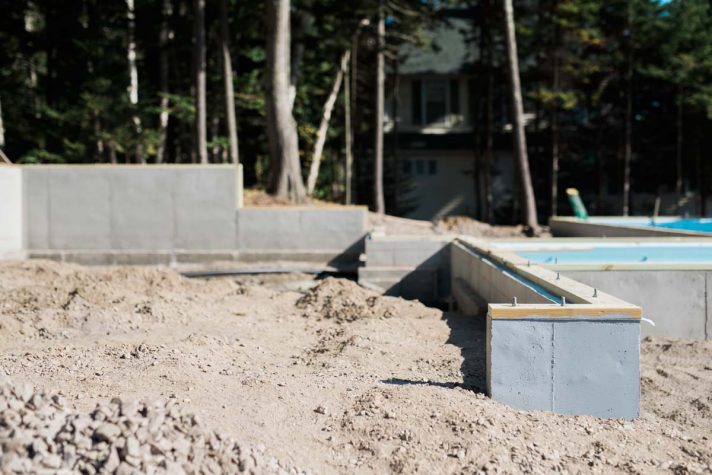 It’s what you don’t see that sets finely crafted things apart from the mass-produced crowd. The fabric of a bespoke suit may draw your eye, but the cut and stitching are what make it fit so well. Similarly, the beauty in a distinctive, well-built home goes beyond design details and custom finishes; it also comes from the wood, concrete, and steel that support it. To build such a home, architects and builders, in Maine and beyond, often call on structural engineer Albert Putnam.

The work of Albert Putnam Associates has appeared many times in this magazine. But Putnam refers to himself and his colleague John Poulin as the “quiet, behind-the-scenes, math guys” of Maine’s residential construction industry. “Part of what we do is physically assembling the drawings that describe how the building goes together, starting at the roof, the rafters, the studs, the floor joists. We’re a trusted advisor, basically. And we happen to concentrate on residential projects.” That’s not exactly rare for structural engineers, but it’s unusual. Unless a home is especially large or complex, a structural engineer is not always necessary, so many engineering firms focus on commercial projects. However, Maine’s long history as a vacation destination and the steady increase of development along the coast have helped create a unique market for Putnam’s firm. Much of it Putnam can’t talk about. “Some of these houses, you never see them,” he says. “They might appear in a magazine, but the owners are very protective of their privacy.”

Putnam estimates that about half of his work is done with local architects. “You want to build a house, you hire an architect. The architect then says, ‘Okay, this is a fairly complex house.’ It doesn’t mean that it’s giant, necessarily, but there’s something unique about it. We assemble the very technical drawings that describe to the builder, after sometimes strenuous negotiations with the architect, how the house is going to be built.”

Putnam and Poulin also make site visits during construction to confirm that what’s being built matches the plans they drew up. This is an especially important part of the process when they are collaborating with out-of-state architects, with whom they do the other half of their work.

“If you are a New York architect, for example, and you have your New York client, and you want to represent that client well, up here in a place where you’ve never built before, you would immediately need to find somebody you can trust to tell you, ‘When we build the foundation on ledge, or the ocean, this is what we do,’” Putnam explains. “When you get into high-end residential work like that, safety isn’t really a concern because they’re fairly robust buildings. It’s more about ensuring that the unique finishes perform well, that the plaster won’t crack in the exercise room below the kitchen after they’ve put all that stone in there.”

Confidentiality agreements prevent Putnam from identifying not just the owners of some of his projects but even their architects. “What impresses me about him is that he knows a lot about our business,” says a partner in a prominent New York City architectural firm, who has worked with Putnam on high-end homes in four states, including Maine. “Albert will spend the time to work on a design so that it’s engineered beautifully, not just to stand up. We’ve also enjoyed the fact that he has a smaller firm, which makes him nimble; he can respond to things quickly.”

Putnam works out of an office on Park Row in Brunswick, while Poulin is based in Bangor to be closer to the firm’s projects on Mount Desert Island. The two men met at the University of Maine in the mid-1990s when Putnam was an undergraduate student studying civil engineering and Poulin was working on his master’s degree in the same field. Before joining his old friend’s firm two years ago, Poulin was focusing on institutional projects in the Boston area. “My larger-scale background complements Albert’s expertise in wood design,” he says. “A lot of our wood- framed buildings do have structural steel components to them. When architects want a big space, it’s our job to make it safe and elegant at the same time.”

Their work takes the engineers on the road much of the time. “We zigzag all over the place, and we’re each close to airports,” says Putnam. “Most of what I do on a daily basis is, honestly, bumping around the coast with my calculator and my red pen. I’ll go meet Will Winkelman and a couple of his folks, and I’ll go up to Rob Whitten’s office. Then we’ll go to Kaplan Thompson, and there’s this strong network of people in and around Portland, Camden/Rockport, MDI—those are the three centers of the residential architects that we work for on a regular basis in Maine.”

Portland-based architect Will Winkelman has worked with Putnam for more than a decade. “While Albert is a structural engineer, which sounds very dry and specific, the reality is that he’s a very good resource for a variety of construction-related conversations,” Winkelman says. “Albert has the personal attribute that he inspires trust, and that enables more in-depth relationships than one might think an engineer would have.”

Putnam and Poulin don’t just work on new builds; their expertise is also in demand on Mount Desert Island for another reason: annual maintenance on the area’s sprawling, aging summer homes is a significant piece of the off-season economy. “The winter maintenance on some of these properties can be extensive,” says Putnam. “We have relationships with many of the families and caretakers. They call us to verify that the work needs to be done; we’ll put together some sketches and then make occasional site visits.”

All this traveling around Maine has also made Putnam something of an expert on where to eat. “We know where all the good coffee shops are, and all of the good road food,” he says, naming Dot’s in Lincolnville, Buck’s Harbor Market in Brooksville, and Town Hill Market in Bar Harbor as some of his favorite stops.

Home for Putnam, his wife, and their three children is Brunswick, just three blocks from his modest, tidy office on the ground floor of a converted house. On a shelf behind his spacious desk is a stack of rolled drawings, some detailing impressive projects for people with well- known names. For Putnam and Poulin, however, what matters is not their famous clients but using their skills to help create fine buildings. “We see it as a tremendous opportunity, to work on these great houses,” Putnam says. “A lot of structural engineers would have very little interest in understanding the detail that goes into them. I think it’s fascinating.” 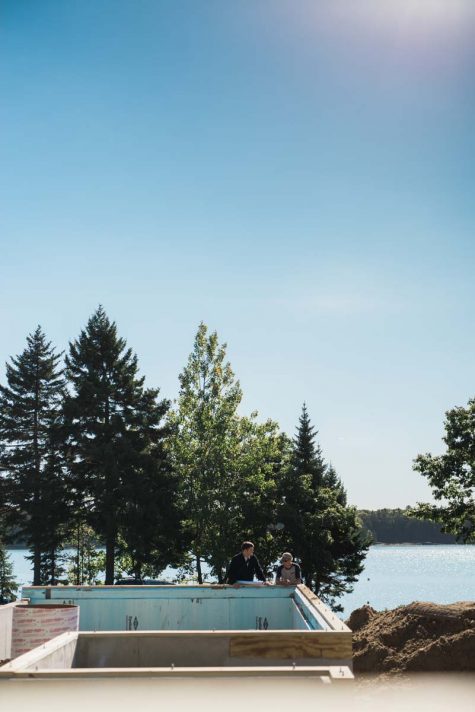 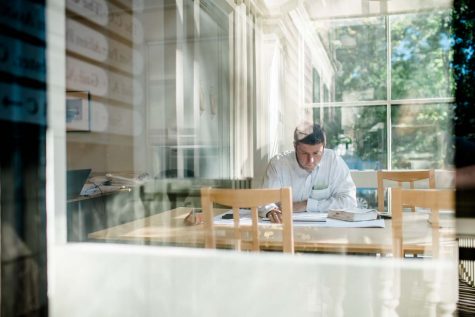 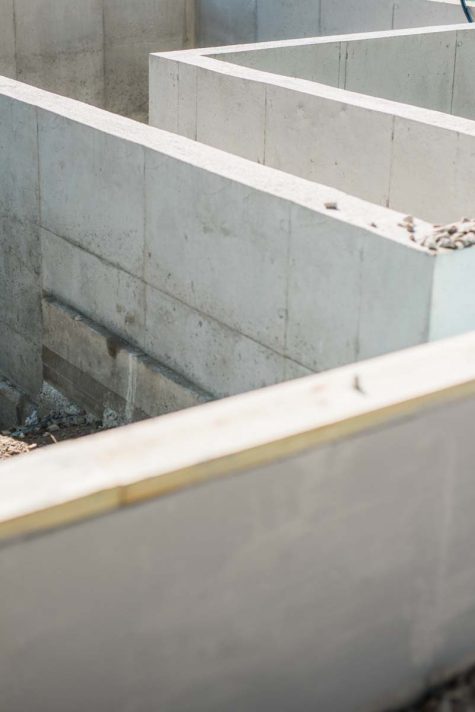 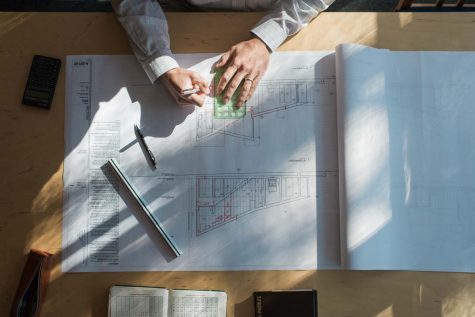 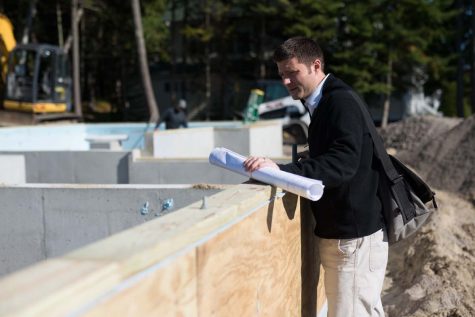