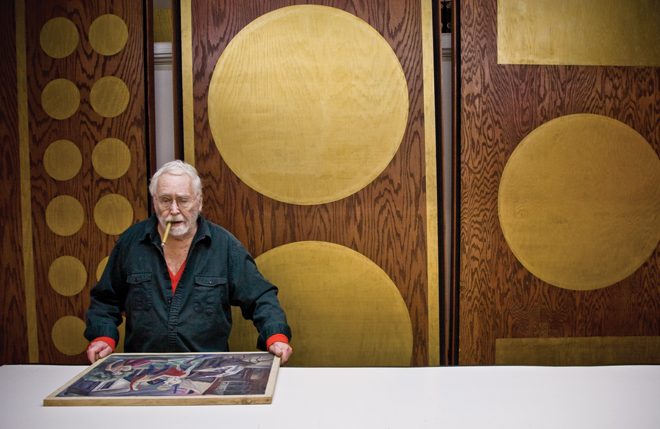 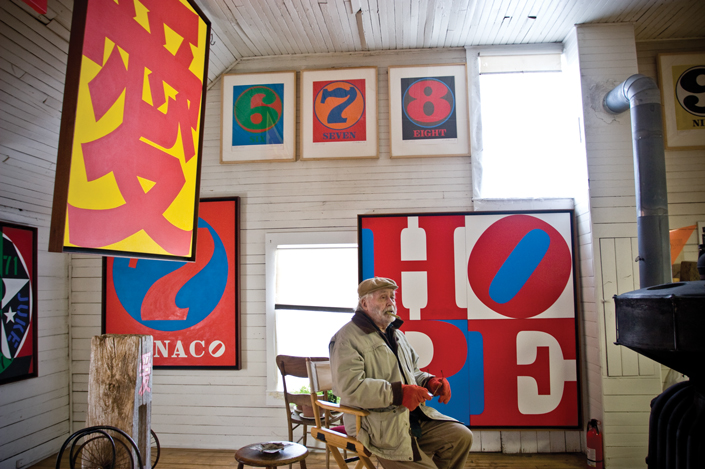 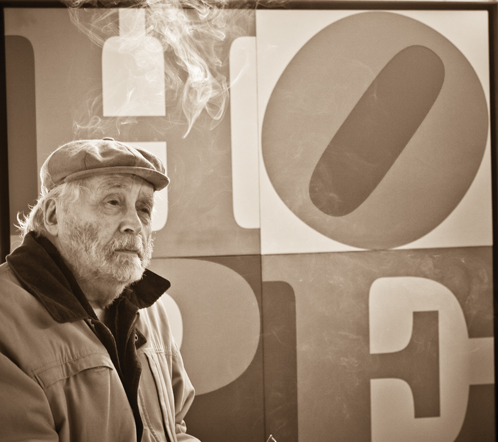 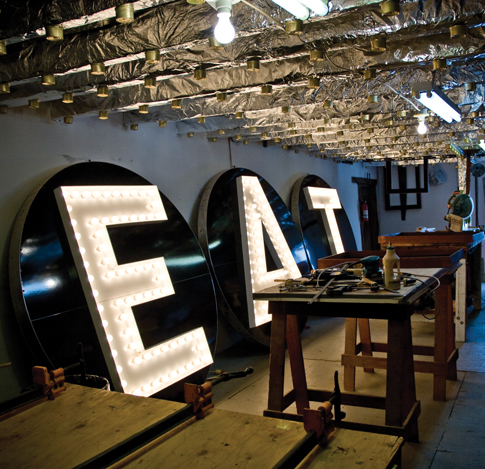 The Star of Hope Lodge, a commanding Victorian structure on Vinalhaven’s Main Street, has been the home and studio of Pop Art icon Robert Indiana for the past thirty years. This summer, the Farnsworth Art Museum in nearby Rockland will celebrate the artist and his unique island residence in the exhibition Robert Indiana and the Star of Hope. Indiana will also receive the museum’s fourth annual Maine in America award, presented to an individual who has made an outstanding contribution to the understanding of Maine’s role in American art.

“It’s a happy coincidence,” says Farnsworth curator Michael Komanecky, referring to the fact that Indiana is receiving the award in the same year that a major exhibition of his work is being mounted. “Robert Indiana personifies the continuing significance of Maine in the ongoing narrative of American life and art,” adds Richard Aroneau, president of the museum’s board of trustees. “No living American artist better exemplifies the unironic, exhilarating optimism of the pop culture that emerged in the 1950s and continues to resonate today.”

Indiana is of course best known for the LOVE logo he created in 1964 as a Christmas card for the Museum of Modern Art. With the letters stacked atop another and its distinctive tilted “O,” LOVE is one of the most widely recognized and reproduced images in contemporary art.

But there is more to Indiana than LOVE. Over the past five decades, using words such as “eat,” “die,” and “hug,” he has created a broad range of works that speak eloquently to universal human concerns. One of his most powerful series is a group of paintings and prints that pay homage to Maine native Marsden Hartley. And the majestic totemic sculptures that Indiana has created from discarded wood suggest at least a passing connection to the work of another Maine artist and close friend, Louise Nevelson.

Most recently, however, there is HOPE, an image he created this past year in response to Barack Obama’s presidential campaign, of which he was a major supporter. Already, the artist’s HOPE, which premiered as a six-foot, stainless-steel sculpture at the Democratic National Convention in Denver, is being seen as “naming the new generation” in the same manner that LOVE came to symbolize the 1960s.

Indiana was born Robert Clark in New Castle, Indiana, in 1928. He adopted the name of his home state because he “wanted a more distinctive handle,” he says. “It was Tennessee Williams who inspired me.”

In 1969, Indiana visited Vinalhaven for the first time, renting a seasonal studio in the Star of Hope Lodge from the photographer Eliot Elisofon. When Elisofon died in 1973, Indiana bought the building from his estate, paying $10,000 for the former Odd Fellows hall. Five years later, when his building on Coenties Slip in New York City was sold, the artist moved to the island full-time. It has been his home and inspiration ever since.

“It’s an ideal situation out here,” he says, “away from the crush of New York. It’s peaceful. Much more has happened for me here in Maine, so I see myself as a Maine-iac.”

With three and a half floors filled with decades of work and a complete repository of the artist’s archives, the Star of Hope, says curator Komanecky, “is one of the most remarkable artist’s living spaces in American art—it’s more than a house, more than a studio, it’s a really important part of him and his life as an artist.”

The moniker “Pop Artist” has never sat well with Indiana. The artist prefers, he says, to be considered “a realist who paints real signs.” His works are, in fact, more personal, psychological, and emotional than ironic. “Irony,” he says, “bores me.” In the course of history, Indiana may be best remembered for his use of words and the influence he has had on a younger generation of text-based artists such as Jenny Holzer, Christopher Wool, and Barbara Kruger.

Today, at the age of 80, Indiana is looking back on his fifty-year career and revisiting themes that first emerged in the 1950s. “I’m folding back into my very beginning,” he says, “making works that have to do with the circle—after all it has been the central motif of my career, that tilted O, you know.”

The exhibition, Robert Indiana and the Star of Hope, will be presented at the Farnsworth Art Museum in Rockland from June 20 to October 25, 2009. The exhibition will be accompanied by a fully illustrated catalogue with essays by John Wilmerding and Michael Komanecky and a film on the artist by documentary filmmaker Dale Schierholt.
The Maine in America award, now in its fourth year, is granted by the Farnsworth Art Museum’s Presidents Council to honor an individual or group who has made an outstanding contribution to the understanding of Maine’s role in American art. This year’s presentation will occur during the Maine in America Summer Gala, which will take place on June 27, on the grounds of the Farnsworth. The previous winners of the Maine in America award were John Wilmerding (2006), Andrew Wyeth (2007), and Will Barnet (2008).