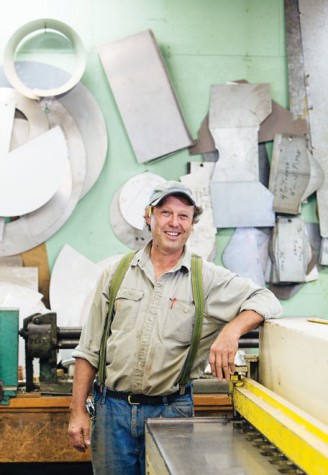 John Gawler has been roofing since he moved to Maine at 17. He’s been playing folk music even longer than that. 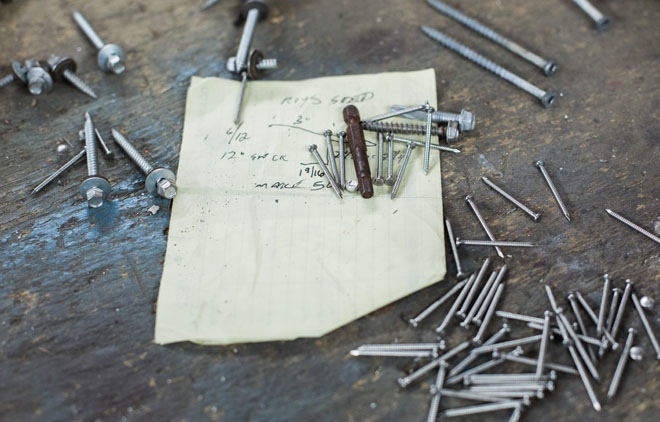 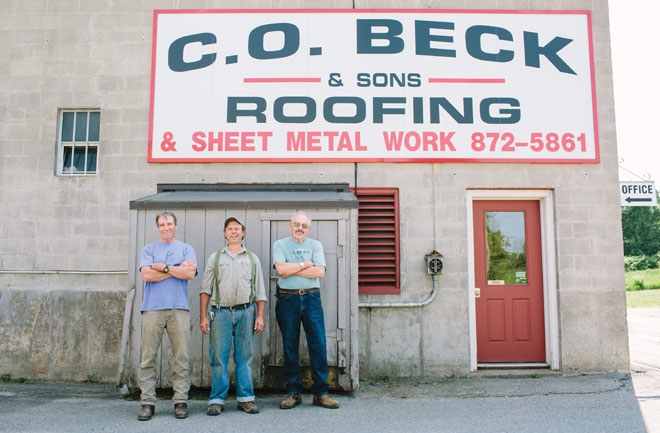 John Gawler (in the middle) pictured with Kenny Taylor (on the left) and Bill Beck (on the right), co-owner of C.O. Beck and Sons and longtime friend of Gawler. Gawler has been working for this fourth-generation family business for the past several years.

Ellen and John Gawler on the porch of their home, up the hill from John’s shop. They play with friends and family all over the state in the Gawler Family Band. 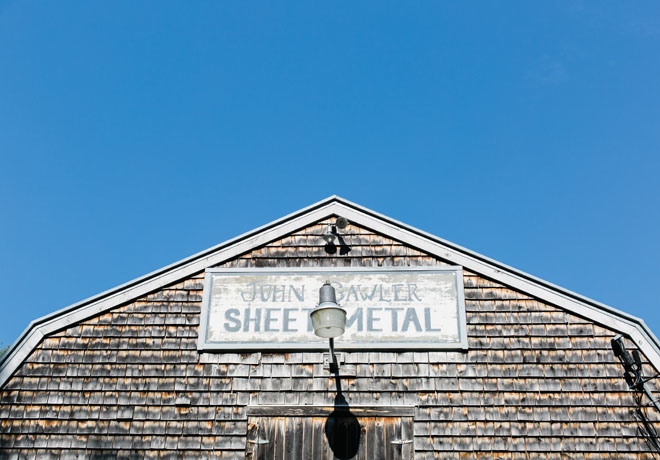 Gawler built his metal shop on family land in the early ’80s. After decades in business, the John Gawler Sheet Metal sign is wonderfully worn.

John Gawler of C.O. Beck & Sons on a life of love, music, and roofing

From the time John Gawler was a little boy, he couldn’t climb high enough. When his parents and sisters went looking for him around the family camp on Great Pond, they knew to tip their heads back, to search him out among the trees, as high up as the branches would take him. As a teenager, he and his friend Bill Beck built a treehouse 50 feet in the air, which Gawler slept in all summer long. He can’t say why, exactly, it felt so good to be high off the ground. But that is the point: it felt right. And when you grow up feeling “like a fish out of water”—which is how Gawler describes what it felt like for him growing up in downtown Washington, D.C.—you tend to hold tight to what makes you feel right. If that’s the branch of a tree, then so be it. Keep climbing.

Growing up, Maine was the place where Gawler felt most like himself. “I think you could call it community,” he says, standing outside his shop in Belgrade. He comes around to that term “community” slowly, after giving it some thought. “Community in Washington, D.C.? I just couldn’t find it in the way my folks lived. Couldn’t find it in the way my peers lived. Up here? There it was.” After a brief pause his smile breaks open, wrinkling the edges of his face. “I was accepted for who I was.”

If everything had gone according to his family’s original plan, John Gawler would have been the fifth generation to run the prestigious family business, Gawler’s Funeral Home, in Washington, D.C. Thankfully, his father was “wise enough to know that if you don’t love what you do then you’re not serving yourself or others,” Gawler tells me.

And so, in 1970, not yet graduated from high school, he went down a different path. He moved up to Maine and found work as a caretaker for seasonal properties around Belgrade Lakes, checking in on the camps through the winter and making repairs as needed under the guidance of men he’d always admired growing up. It was a bold move. It would also prove to be the right one.

Over the next few years, Gawler and Bill Beck—who was the grandson of the founder of the Maine roofing company C.O. Beck and Sons—started their own renegade roofing business. Not surprisingly, Gawler loved spending his days on rooftops, working with his hands. He loved the collaborative nature of metal roofing in particular, and the rhythm he could achieve alongside Bill. At its best, Gawler likens roofing to playing music, another passion of his. In his late teens and early twenties, he picked up as much work as he needed to get by as a young man with few needs, and he immersed himself in a community of people who, like himself, had a passion for playing traditional folk music. It was through music that he met a fiddle player, Ellen, whom he later married. In 1974 Gawler inherited farmland from his father and started building the home where he and Ellen would raise their three daughters, Molly, Edith, and Elsie. He also built the headquarters of his own roofing and sheet metal business on the property.

By the late ’70s, Bill had gone to work in his family business, and Gawler was getting his own business up and running. Linwood Beck, Bill’s uncle and the owner of C.O. Beck and Sons at the time, was an important mentor to Gawler from the beginning, offering advice, lending tools and work space, recommending Gawler for jobs the Becks were too busy to take on, knowing Gawler would return the favor. “The Becks were creative beyond belief in how they detailed their jobs,” Gawler tells me, recalling their influence on his own work and career with deep gratitude. “They had such a strong foundation in sheet metal work. There was this vast body of knowledge that they introduced me to.”

In 1982 the generosity of another local business owner changed Gawler’s life. Around that time, machinery had come on the market that revolutionized the industry, cutting labor costs drastically and expanding the market for painted metal roofs. The attractiveness and affordability of painted metal meant metal roofs were no longer relegated to barns and outbuildings, but became a popular option for home roofs as well. There was plenty of work and money to be made, but for Gawler, the cost of the machinery was prohibitive—a fact Skip Hammond of Hammond Lumber managed to pry out of Gawler one morning at a local diner. “Skip asked, ‘There’s machinery to do what you’re doing? Why don’t you have it?’” Gawler tells me, flashing an incredulous smile as though it had all gone down yesterday. “I said, ‘Because it costs $25,000.’ He said, ‘Well you come by and see me this evening. You are going to buy a machine. And while you’re at it, you’re going to start getting some credit at the bank, because I’m going to write you a check and you’re going to buy that machine and then you’re going to get a loan, pay me back, and build credit.’ Just like that,” Gawler said. “There was no question. It was beautiful.”

His business took off after that, which was a good thing, because by then the Gawler family was growing. Over the next couple of decades Gawler worked with a number of outstanding contractors throughout the state on unique projects—like the copper work on Oscar de la Renta’s New England home, a job he got through his longtime partnership with John Libby of Houses and Barns by John Libby. “I had no idea who Oscar was,” Gawler said, “but my sisters did. He was a man with a lot of poise. And golly, you should have seen his shoes.” Work brought him up and down the coast, up on roofs with the most unforgettable views. He was particularly fond of island jobs. He and his coworkers—and sometimes one or more of his daughters—would stay on-site for a week at a time, immersing themselves in island communities they still return to, oftentimes with musical instruments in hand.

Through all the major events and ups and downs of small- business ownership, music has remained a blissful constant in Gawler’s life, and in the lives of his loved ones. The Gawler family— in its numerous iterations—is probably the closest thing Maine  has to a Carter Family. Although they play far and wide and fairly often throughout Maine, music, for them, has never been about commercial success. It has always been about joy and keeping traditional songs alive. “This thing can be totally asleep,” he says, pointing to his head. “The chatter is gone. And it’s all about the heart.” Sometimes he talks the same way about roofing.

Several years ago, when Gawler had whittled his business down to himself and one other roofer, he was approached by Carl Beck, who now co-owns C.O. Beck and Sons along with Gawler’s longtime friend Bill, to see if he might like to join their team. After ensuring that his employee could come too, he says he “told them change might be nice.” And it has been. Since 2007 Gawler has enjoyed working more closely than ever with men he has admired all his life, like Kenny Taylor, the sheet metal foreman, who has been working for the Becks for going on 50 years. “It’s that kind of place,” Gawler says in reference to Taylor’s tenure with the business.

Although Gawler’s not often up on a roof these days, he’s in the sheet metal shop, working with contractors and architects and roofers to make sure projects are carried out according to plan. These days he works at C.O. Beck and Sons three days a week, which leaves time for music and spending time with family. When I ask him what else keeps him busy, he says he’s not so much worried about busy.

“What’s really becoming important to me as I get older is space. Free space. Empty space,” he says. “I’ve been busy a lot of my life, and now I find it’s time to be less busy.”

Then he remembers one last thing.

“Oh, I have a hobby,” he says, a little bashfully. “It’s flying airplanes. I tell you, I’m free up there. I just love it.” And then his smile breaks open again, for maybe the hundredth time that afternoon. “Did I mention earlier how I like to be up in the air?”