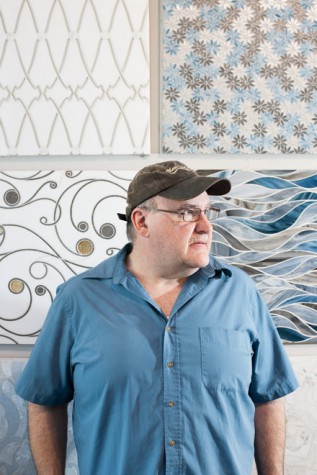 Larry Stoddard learned how to set tile when he was 20 years old. Although he is now the owner of a successful retail business, he has never stopped performing the hands-on work of installation. It’s his passion—and his craft. 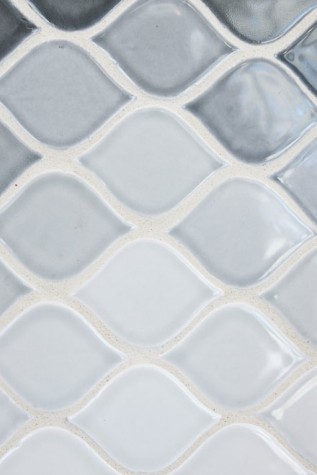 Inside the Distinctive Tile and Design showroom on Forest Avenue in Portland, you’ll find all manner of tile, from luxury pieces to inexpensive subway tiles. 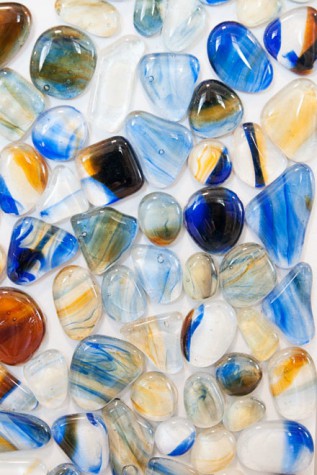 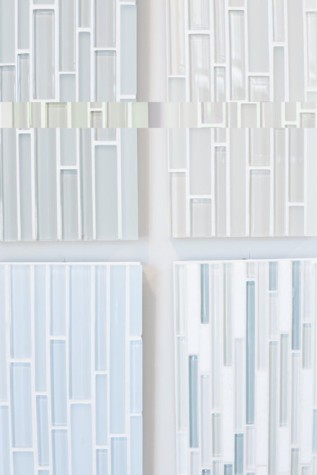 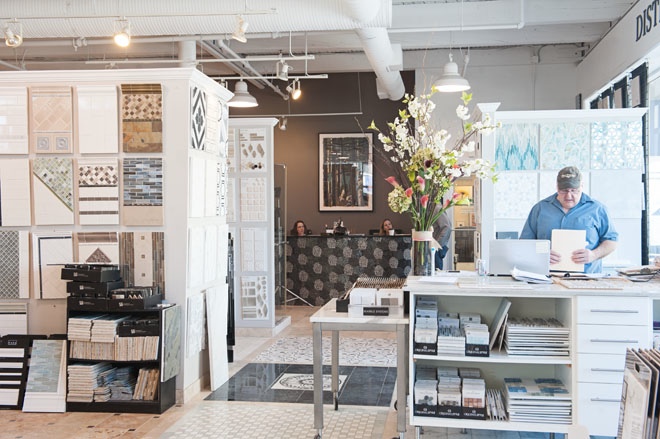 “I think the best part of my job is hearing from happy customers,” says Stoddard (above). “People spend a lot of time in their kitchens and bathrooms. The bathroom is where most people start their days—to have a good place to start your morning makes a huge difference.”

Larry Stoddard, owner of Distinctive Tile and Design, brings a Maine work ethic to the world of luxury home wares.

Inside the Distinctive Tile Showroom on Forest Avenue in Portland, you’ll find tiles of all shapes and colors. There are tiles made of wood and tiles made of glass and big thick tiles made of concrete. There are little ruby red tiles that seem to glow from within, and two-foot-square pieces of marble that have swirling patterns, free yet precise, carved by water. There are simple subway tiles and roughly graceful Etruscan-style tiles. There are vibrant greens, clean whites, and ocean blues. There are even painted tiles, covered in patterns of Maine wildflowers, each brushstroke a whisper of color.

I meet Larry Stoddard, owner and founder of Distinctive Tile and Design, amidst this bouquet of tile. He gives me a tour of his Portland showroom, starting with some of the most recent acquisitions and ending with some lovely Maine-made pieces. “We wanted to create an art-gallery feel,” he explains. Tile is a part of the home that often goes unnoticed, but under Stoddard’s tutelage, I learn just how much it can change the look and feel of a house. “Everyone wants to bring artwork into their home,” he says, “and tile is just one way to do that.” As though to reinforce this point, the walls of Distinctive Tile are hung with paintings by Judy Schneider and an encaustic piece by Shoshannah White, among other works.

The artworks, like the tile, are chosen by Stoddard himself. “Larry has an incredible eye for selection,” says Kennebunk interior designer Louise Hurlbutt. Although Stoddard’s background isn’t in the arts—he’s been laying tile for years, and shows no signs of stopping, even now that his business offers more glamorous opportunities—he has developed an artist’s ability to separate the visual wheat from the chaff.

Stoddard started working with tile in the 1980s, a profession he chose for its stability and steady pay. The son of a local tile distributor, Stoddard began working as an installer at age 20, and he quickly discovered that he loved the hands-on nature of the work. His low-key warmth and open personality endeared him to his clients. While working as an installer was enjoyable and profitable, there was one problem. “There was just no fun stuff out there!” he recalls with a loud laugh. “People were asking for more and driving to Boston for more interesting tile. You had to pay for the more beautiful, artistic tiles. And the old dealers, they just didn’t want to pay for it.” Stoddard saw a hole in the market: Maine suppliers didn’t have the kind of high-end, intricate wares that customers had started to demand. Plus, he’s the kind of guy who likes a challenge—he wanted to work with the more involved materials. Always a diligent worker, his inner craftsman had begun to fight its way out.

In 1989 Stoddard opened his first store in Yarmouth. “The first few years weren’t easy,” he admits. At first, his store featured all kinds of flooring. But something wasn’t working. “About 15 years ago, we realized that we needed to specialize and get very good at one thing.” That one thing turned out to be luxury tile.

Before meeting Stoddard, I had never truly considered luxury tile. Tile is such a utilitarian thing, an important feature of a shower or a component of a kitchen. Yet looking around the showroom, I think of something the famous designer William Morris once said: “Have nothing in your houses that you do not know to be useful, or believe to be beautiful.” Too often, we tend to think of things as being either beautiful or useful. But according to this time-tested rule, luxury tile is the perfect purchase, hitting both marks.

Although Stoddard modestly tells me he is neither an artist nor a designer, it’s clear that he has a keen aesthetic sense. But that alone doesn’t account for his success. He’s also an extremely practical man who is willing to go the extra mile for his clients and his community. Even after a job is finished, Stoddard stays in touch with his clients. He has been known to return years later to fix any issues, free of charge. He feels a strong camaraderie with others in the business and will drop everything to help a fellow installer or designer, a fact that has lead him to develop strong, lasting relationships with other craftsmen. “The other thing about Larry,” says Louise Hurlbutt, “is that he is kind. I had breast cancer and started doing Mary’s Walk, and every year, his group from Distinctive Tile walks with me. Every year. I’ll always appreciate that.”

Stoddard is also deeply committed to training his employees. The Distinctive Tile and Design crew attends trade shows in Florida, Nevada, and Boston. He pays for his employees to take classes on installing, and he takes them to fabric shows (“It’s important for us to stay up on the trends,” he explains). He even extends his good-natured help to novice installers in need of guidance. “Sometimes, guys we don’t work with will call us for help,” he says. “I’ll go and I’ll help them through the first day, especially if they’re using our product, but sometimes even if they aren’t.” I ask him why he does that, knowing that they could be competition down the line. “They’re smart guys, and they can be terrific installers,” he says. “I want them to know that.” Stoddard neither fears nor relishes competition. He simply ignores it, preferring instead to focus on what he has in common with his fellow installers: a respect for the craft. The work itself is more significant to him than receiving credit or praise— Stoddard truly appreciates a job well done, for reasons both aesthetic and personal.

Repeatedly during our conversation, Stoddard wonders aloud why more “young guys” aren’t getting into the tile installation business. “It’s such a great profession,” he says. It’s clear he means this. Here’s a man who, when asked about his hobbies, explains that he usually works nights and weekends. Not because he has to, but because he wants to. As we sit and talk in his artful showroom, it becomes clear that he would prefer to be out on a job, working with his hands to finish a bathroom or set a backsplash. He does enjoy the occasional dinner out with his wife, Claudia—a fact that prompts a long conversation about our favorite Portland restaurants—but work is never far from his mind.

“We’ve taken a lot of lumps along the way,” he says. “It took me 20 years to learn how to run a business. I never went to college. I work from common sense.” But it’s more than common sense—it’s also honesty and commitment that propels Stoddard ever forward. “Every company has problems. Just last week we had a shower that leaked. We replaced it at no cost.” He vehemently shakes his head. “That never should have happened in the first place.” Most businesses offer a one- year guarantee on tile installation. Stoddard officially offers 10, but “only because we have to say something. We have never turned our back on a job. Even 20 years out, we’ll still come fix it.”

I tell Stoddard that these seem like personal values, not just a business ethos, and he agrees wholeheartedly. “This company, and this business, is extremely personal to me,” he says. Unlike many people in the home and design business, Stoddard has continued to do the physical work of installation with his own hands. As he explains, “I want my customers to know that I’m here for them, no matter what. As long as I can do that, I will.”