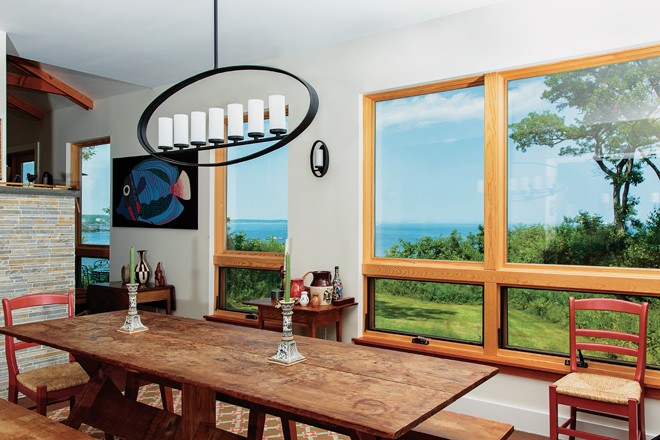 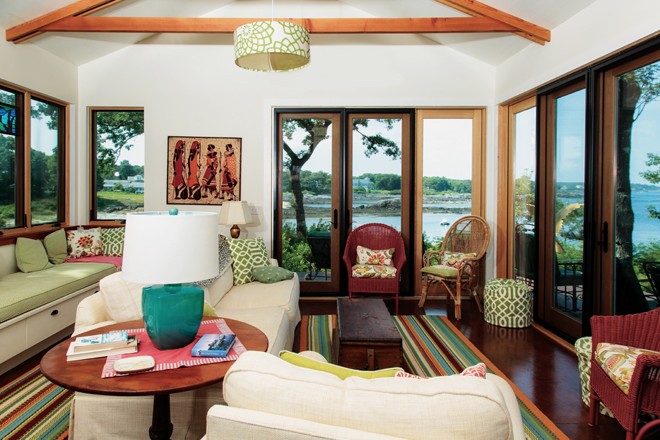 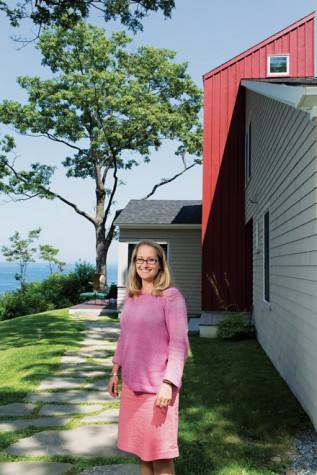 Peaks Island is a wonderful place: a tight-knit community, full of natural beauty, a short ferry ride to mainland Portland. For a builder (or a homeowner) it can also be a challenging one. Think, first of all, of water: salt and fresh, in every form from fog to ice, pounding or seeping its way into every crevice. Yet for Heather Thompson, this nexus of land and sea, city and village, has offered just the right climate for growing a building practice suited to coastal life.

Thompson herself is an unexpected kind of builder. She grew up with two brothers in South Portland, the child of public-school educators. She went to the University of California at Santa Cruz to study sculpture; she and her then-husband, Harvey Johnson, returned to Maine in 1996. They took on a variety of endeavors, including founding the Front Room Gallery in South Portland and starting a furniture company called Thompson Johnson Woodworks. In 2001 the couple and their young son moved to Peaks Island, with the plan of starting a construction business with Thompson’s father. “When there’s a new company, everyone is really excited. ‘It’s a new construction company; they’re going to be great!’” she recalls. The company started with small kitchen and bath projects, but was quickly caught up in the building boom of the early aughts. Soon Thompson Johnson Woodworks was a full-service design-and-build company with 15 employees, taking on projects of all kinds.

The ensuing years brought success, and some difficult changes. Thompson and Johnson separated in 2010, both remaining on the island to raise their two children, Arthur and Eleanor. Thompson left the company and took a job with Portland landscape architects Mohr and Seredin. Within a year, she missed her company too much to stay away. She bought it from Johnson and took on the leadership role herself. “It was a big scary thing, but I really wanted to be back,” she says. Her previous 10 years of running the company, and the “excellent crew” she had helped build during that time, smoothed her path. “At this point,” she says, three years later, “I feel like I’ve figured it out.” The company has scaled down from its peak, now employing seven workers— most of them veterans of several years—and keeping a tight focus on high-efficiency, high-quality building. Meanwhile, its geographic reach has expanded to include projects within a half- hour drive of Portland.

The specific challenges to construction posed by Peaks Island have left their mark on Thompson’s approach. Many of the existing houses on Peaks, lead carpenter Mark Pollard tells me, were built without much of a plan. “Some of them started out as tent platforms. They had walls and a roof added on, and then a covered porch, which was eventually turned into a living space. All of this was largely done without consideration to the structure.” Often a renovation project that starts small will end up encompassing a foundation-up rebuild, and even in sturdier homes straight lines are few and far between. “We spend so much time blending lines that are converging or diverging, to fool the eye,” says Pollard, who takes a break from a nearly finished renovation to talk with me. He points out a slightly trapezoidal area between a line of windows and a roof; after weeks of careful reshaping by the crew, the irregularity would go unnoticed unless a meticulous carpenter pointed it out.

The diverse intelligence needed for this kind of work is a shaping force in Thompson’s crew. “We tend to hire people who have studied art or science in college, and have come to building because they have a passion for making things. They can figure out solutions to complicated problems, can understand best practices, building science. They don’t just push through; they’re thoughtful.” She sees her crew as part of the “maker movement” that has been inspiring so many Mainers in recent years. Where artists might once have been content to create art for art’s sake, many now want to put their aesthetic skills to more pragmatic use. The result is a construction crew that, according to Pollard, is set apart by “attention to detail, commitment to craftsmanship, wanting to build durable structures that won’t fall apart in 10 years.”

In the exposed environment of the Maine coast, those durable structures require careful planning and high standards. “In a late-fall storm with 70-mile-per-hour winds and rain blowing upward, the window flashing details, the proper waterproofing, and drainage make the difference between major rot repairs in five years and a house that’s going to be warm and dry and last,” Thompson explains. In the company’s internal standards, the traditional “dime gap” of space between a cabinet door and its frame becomes a dime and a nickel, allowing room for swelling. The employees bend their own metal flashing for windows and doors; the prebent variety that most contractors use is lightweight and doesn’t stand up to salt air. Wood is primed and painted on all sides; rainscreen is installed behind siding to create a gap for airflow and drainage; and fiberglass insulation is replaced by dense-pack cellulose or closed-cell spray foam. Most of this work is invisible once the house is finished, but Thompson says the homeowners feel the difference. “They’ve lived in old houses and don’t realize how much more comfortable a house that’s tight and well insulated is. The first thing we hear is ‘My feet aren’t cold anymore!’”

The houses Thompson works on are a little like the island itself: with qualities of strength and resilience covered over by a smooth facade and a cozy interior. The same can be said for the company she has built. Through growth and changes it holds firm to its coastal home, whatever the future brings, whatever the weather.