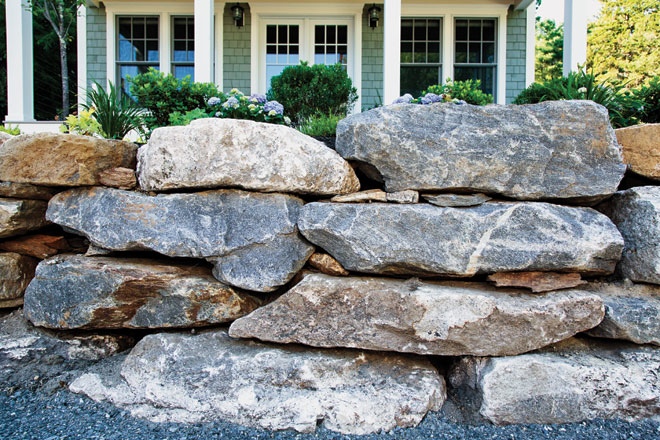 A wall of blasted ledge provides a natural transition to the surrounding landscape. 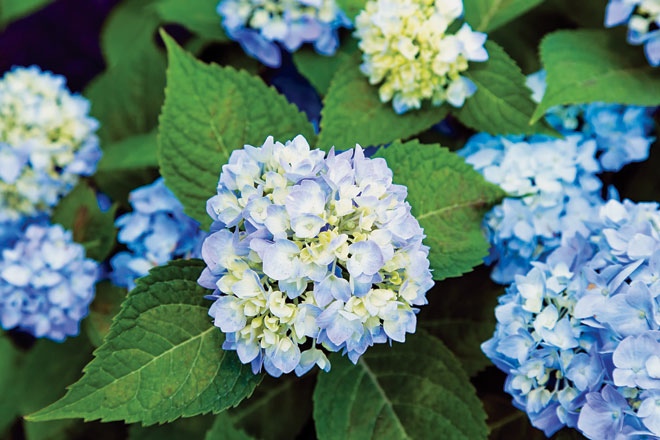 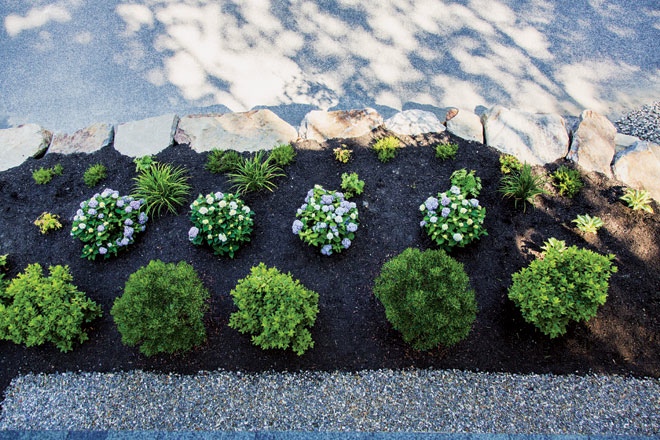 The plantings were designed to blend the full, vibrant, and colorful style of an English garden, with coasthardy plants like P.J.M. rhododendron, Shamrock inkberry, lilac, and juniper. 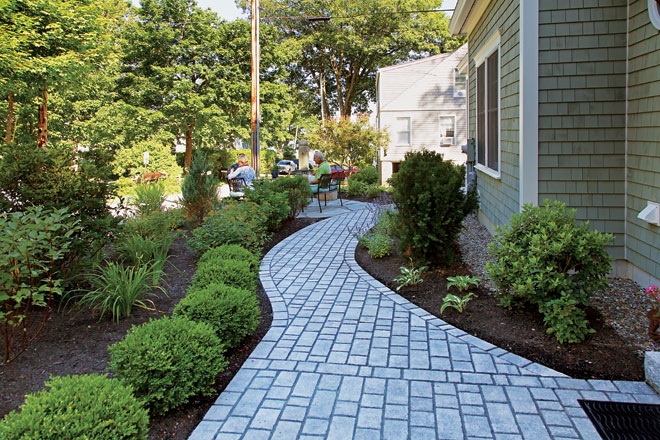 A walkway of Genest Tidewater Stone curves through the property. 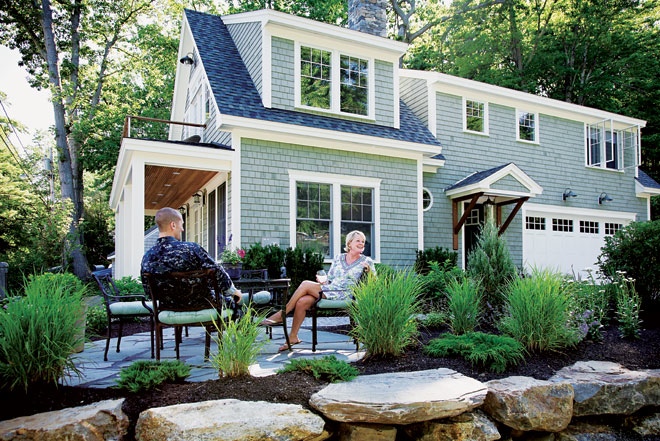 A small lot in Falmouth Foreside makes room for outdoor living with a patio of irregular bluestone. The property’s design mixes natural stone and concrete products to create a cohesive and inviting landscape with lots of curb appeal. 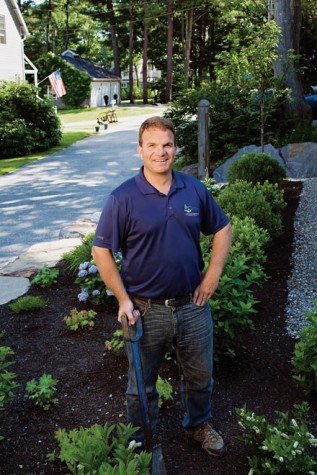 Craig Wright started out mowing lawns; now his company will take on anything

Craig Wright’s white pickup is threading its way through the twisting lanes of Falmouth Foreside on a sunny weekday afternoon. Wright, who spent his high-school years in this neighborhood, navigates the big truck through the narrow streets with confidence, as unfazed by the dogwalkers and joggers who squeeze themselves onto the shoulders as he is by the phone calls that regularly echo through the truck’s cab. This neighborhood of cottages crowded against the shore is a wonderful place for an admirer of landscaping, dense with classic designs and clever uses of space, with charming clumps of roses and daylilies peeking around carefully wrought stone walls at every turn. As we go Wright points out the many homes where his Cumberland-based company, Coastal, Inc., has paved a driveway, built a wall, or designed a yard.

“That one there was for a high-school science teacher of mine,” he says, indicating a small lot with a water view, near the village center. “We did the full landscape”—bluestone terrace, permeable-pavers driveway, and blasted stone ledge, as well as plantings—“in under a week.” The homeowner is a diver; the focal point of the yard is a huge rusted anchor. A few minutes down the road he shows me grander projects, estates assembled from smaller parcels of land and unified with sweeping lawns, stately trees, and entrance pillars of brick or stone. Within these few miles of coast, the number and scope of Coastal, Inc.’s projects is dizzying.

The company’s beginnings were much more humble. Wright was born in New York, to parents who were native Mainers. In 1978, when Wright was seven, his father, a NYPD officer and detective, died in the line of duty. His mother moved with her three sons to Portland, where her family owned Mougalian Rugs. Wright drifted into landscaping in the guise of lawnmowing, when he was a high-school student at Cheverus Academy. Eventually the lawnmowing became a business, his colleagues struck out on different paths, and Wright was left sole owner of what was then Coastal Lawn Care. From “driving around a Jeep with a trailer,” he now heads a 20-year-old company that employs around 40 people. “We run two mowing crews, three excavation crews, two maintenance and planting crews, three stone crews,” he tells me. “We’re able to do anything from plant your shrubs to redo your driveway.”

The remarkable thing about Coastal, Inc.-is the diversity of its work. “We don’t do pesticide applications, irrigations, tree removal,” Wright explains, “but we do everything else. Lawn care, pruning, excavation, horse arenas, additions, driveways, installations.” Within the landscape industry, this makes Coastal Landscape something of an anomaly. According to Wright, “Either you’re a design/build company and that’s all you do, or you’re a maintenance company. We’re kind of this weird hybrid company.” This means that a customer who hires Coastal Landscape to install a pool can keep them on to maintain the lawn, and when she needs her driveway paved she has a good idea who to call. “Once we get a customer they don’t usually leave,” says Wright.

To illustrate the point, we drive through Maeve’s Way, a partially finished development in Cumberland Foreside. Wright points out one house that is under construction. “We’re doing the chimney in that one,” he tells me. “And when it’s done, we’ll do the landscape and the driveway.” Throughout the neighborhood he points out walls and shrubs and patios, drawing attention to all of the choices, installations, and maintenance that blur together into the landscape of a lovely neighborhood.

Coastal Landscape’s broad portfolio of services lends it stability, and Wright has taken the strategy and run with it. In its early days, the company struggled with the seasonality that plagues many Maine businesses. “The hard part was keeping employees year-round. You couldn’t do it unless you could keep them busy in the winter,” Wright recalls. The solution was to take up plowing. “Now we’re probably one of the biggest plowing contractors in the state. We plow all the way from Augusta to Massachusetts.” As a result, Coastal Landscape has a steady year-round crew, many of whom have been with the business for years. Wright describes his employees, admiringly, as “a bunch of guys who are hard-working guys. I think we move jobs along a lot faster than most companies. We’re efficient.”

From its current position as an established four-season company, Coastal Landscape faces a particular set of challenges. “On the lawn-care side, there are no real barriers to entry. It’s tough to compete. Everybody with a truck is in the business.” A midsized company with a stable crew carries much more overhead than the high-school kid with the Jeep. It also has the opposite problem: “Snow-wise, we’re competing against some of these big excavating companies that can use their equipment in both summer and winter.” Nevertheless, competing with the little guys on one side and the big guns on the other, the company’s broad base gives it the flexibility to outlast economic downturns and warm winters.

At the moment, Wright says, things are looking up. “People are definitely spending a lot more money on their yards, creating a lot more outdoor living space,” from patios to pools to outdoor kitchens. “Firepits,” he says. “That’s the first thing people ask for is firepits.” As if to confirm the level of demand, the phone rings again, and Wright gets back to work.