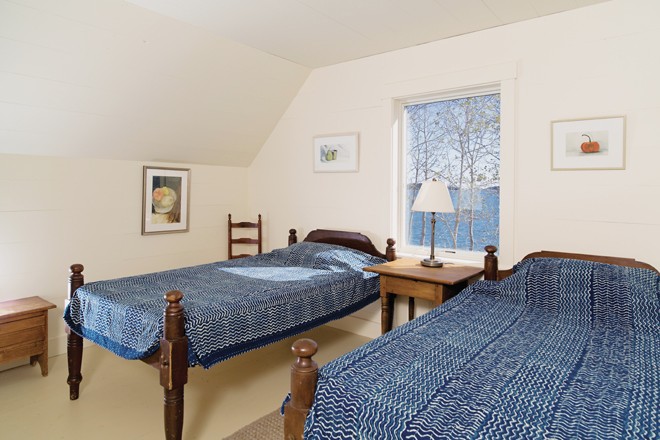 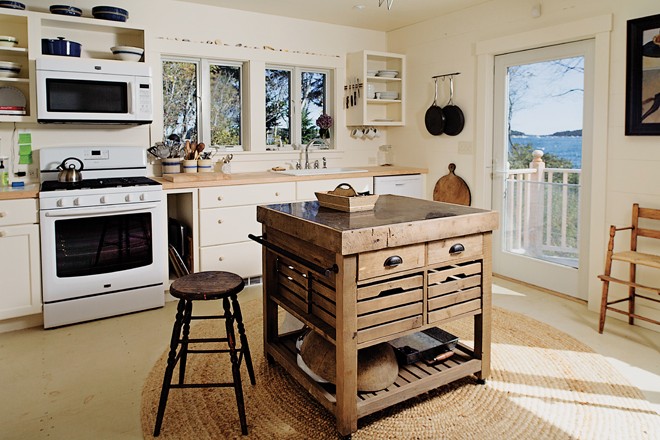 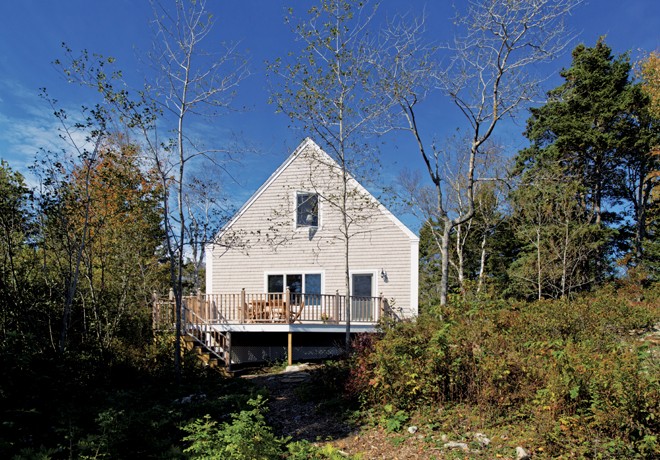 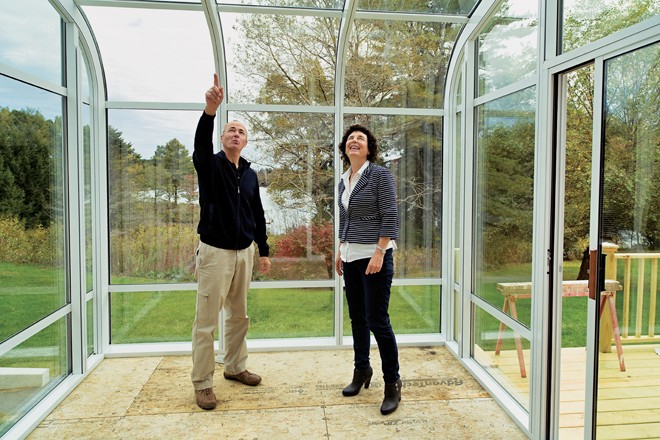 The Robinsons have always loved English-style conservatories and greenhouses. “The light in Maine is very similar to the light in the south of France,” Crystal says, standing with Chris in a recent Sunshine Rooms addition. “It was a natural fit to add solariums to our offerings.” 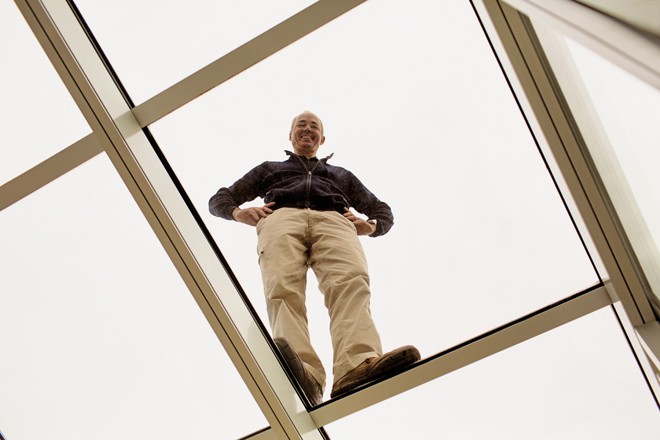 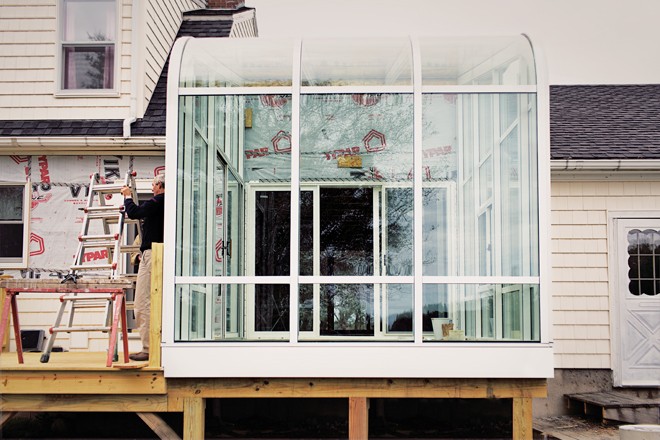 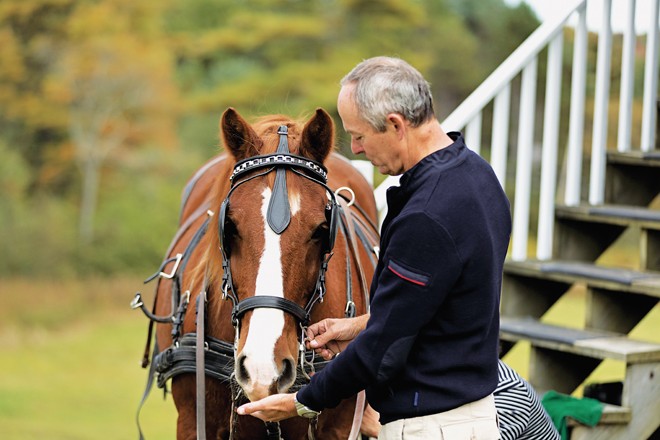 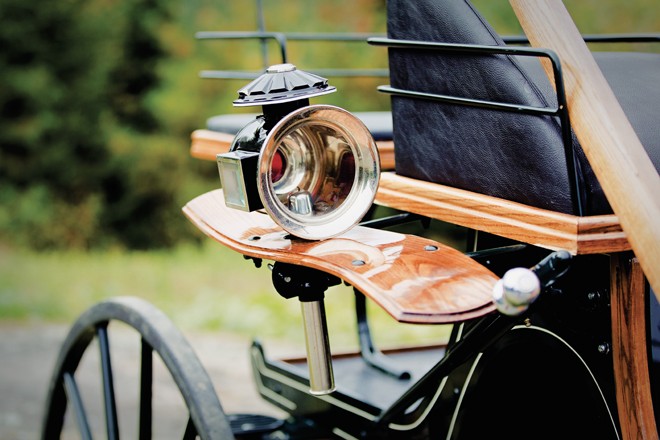 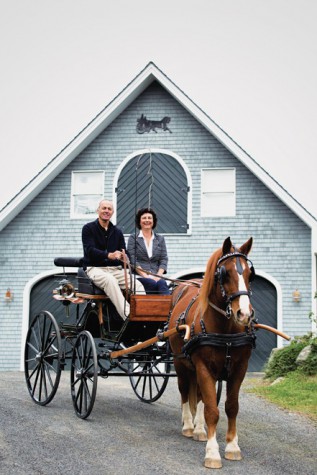 Romeo takes Chris Robinson and Crystal Daggett-Robinson for a ride at their home in Cushing. Crystal met Chris when she was 15, riding her horse down a local road. Today, they keep two horses and both enjoy carriage riding, often on Acadia’s trails.

From the Swiss Alps to the coast of Maine, Chris Robinson and Crystal Daggett-Robinson build beauty wherever they go

If you plan to contract with Chris Robinson and Crystal Daggett-Robinson, co-owners of Daggett Builders in Cushing, prepare yourself not only for their complete and total attention but also for a binder documenting and outlining every step of the process: from a detailed description of the company (“Who We Are and How It Benefits You”) to preconstruction and cleanup checklists, a client survey, and even a “Guide to Hiring a Professional Building Contract”—just in case you may want to look elsewhere. I cannot imagine who would.

“Wow,” I say, when Crystal hands me the binder. “This is heavy.” She and Chris and I are sitting at their Cushing kitchen table overlooking  Maple Juice Cove on a golden October morning. “It’s important for us to know our clients and for them to know us,” she says. Printed on their business card is “Your Home—Your Dreams —Your Builder.”

Daggett Builders is truly a family business, started by Crystal’s father, Wesley Daggett, in 1978. Crystal’s plan from an early age was to see the world. Christopher Robinson was born in Rockland but grew up speaking French in Switzerland because his father was a translator for the United Nations. “He worked at the Nuremberg trials in Austria, and that is where he met my mother,” Chris says. The family moved permanently to Geneva when Chris was five years old, but they came home to adventure-filled Maine summers “on leave” every few years. Their house on Robinson Street in Thomaston was built circa 1820, and it provided them with grounding and a sense of home. “I always knew I was from Maine,” Chris remarks, “and I liked the out-of-doors and building things. As a child in Switzerland, I used to hang out in the local hardware store listening and learning. By the time I was in high school, I had officially become the family handyman.”

“When I was a sophomore, and in my second year of French,” Crystal continues, “Chris’s family spent a year in Thomaston to prep the family home for sale. Chris attended Georges Valley High School his senior year.” Guess who received some private French lessons? The couple spent the next eight years writing to each other as they attended different colleges and traveled. Chris backpacked in Europe and Greece; Crystal worked as an au pair in France and traveled within Europe and to Russia. In 1980 they married in Geneva, and they spent the first six years of their careers working for Procter and Gamble there: he in finance, she, marketing. “We both learned a lot working for P and G, as it was a very well-run company,” Crystal says. Procter and Gamble had a culture of high expectations for its employees, rewarded those who contributed original ideas, and promoted people based on merit, all tenets the Robinsons would remember for their own business model.

Chris and Crystal speak movingly of their life in Switzerland. It’s a beautiful country, great for hiking, biking, and skiing. Chris had grown up in a small village at the foot of the Jura Mountains that commanded a view of Mont Blanc. They found Geneva to be an exciting international city, sophisticated and full of history. Procter and Gamble was like a small UN, with employees from all over the world. “If we wanted to know about the war in Lebanon,” Crystal says, “all we had to do was ask someone who had just been there.”

After six years and the birth of their son, however, the United States beckoned. As wonderful as Switzerland was, Chris was an American and an entrepreneur at heart. Switzerland is a country of rules and regulations. While having a prestigious job in an international company may be one person’s dream, Chris Robinson’s true love was in the building trades. When Crystal’s father invited him to join his construction company in 1986, Chris didn’t even hesitate to say yes. One older brother followed him to the United States and also married a woman from the Daggett family.

Chris and Crystal’s first project was to design and build the house they still live in on Pleasant Point Road in Cushing. “We were just kids,” Crystal says now. “Probably we would have done some things differently.” But kids or not, the Robinsons even then saw the importance of flow in an open plan: they set the floor tiles on a diagonal, directing perspective from the kitchen into the living room. And everywhere, everywhere, sunlight and views of the surrounding meadows and ocean. “The village wouldn’t even give us permission to install an inconspicuous skylight in our place in Switzerland,” Chris says, “so we rebelled and installed 52 large windows in our house in Cushing. We can now watch the sun rise and set from our open-plan kitchen/living room.”

The building business was brisk for Daggett Builders in the ’80s and ’90s. The Robinsons took over from Wes Daggett in 2007. The company had expanded from renovations to custom-built homes, establishing a solid base for itself, especially on the Cushing peninsula. Daggett performed extensive work for an extended family of artists, from an ongoing 20-year renovation/replication of traditional fishing villages on Benner and Allen Islands to a complicated renovation/restoration of a treasured 1880s family home, which involved maintaining the beloved structure’s crooked doors, windows, and trim. Along the way, they were hired elsewhere to build a home movie theater addition, a billiard room, and unique display cabinetry for an antique toy-train collection.

“We’re always learning,” Crystal tells me, through  classes, reading, investigation of new products and methods. Presently, Daggett is an independent dealer for Sunshine Rooms, Inc., specializing in solariums and architectural glass structures. “The light in Maine is beautiful, very similar to the light in the south of France,” she adds. “We’ve always loved English-style conservatories and greenhouses, so it was a natural fit to add solariums to our offerings.”

Planfulness appears to be a hallmark of this collaboration. It’s evidenced not just in the extensive communication and feedback tools Crystal has assembled in the binder but also in their approach to Daggett’s employees. The Robinsons see their business as a system with the objective of creating a win/win/win for everyone involved, from their clients to their employees, subcontractors, vendors, and themselves as owners. “We’re working on developing a better system,” Chris explains. “General contracting is a service-oriented business. All we have to offer is our time, our experience, and the drive to constantly improve through listening, learning, adapting, and rebalancing.” Ultimately, Chis and Crystal hope to shift day-to-day oversight of Daggett Builders to a well-rounded team of invested employees. While they’re not planning to retire any time soon, they are mindful that careful preparation is necessary in order to relinquish control and to build strength. “It’s common sense,” says Chris, whose favorite saying is “The key thing is to remain calm.” “What could be more important than that?” Crystal asks. “If you give your best and expect the same from others while remaining calm, everyone achieves more and leads a happier, more balanced life.”

On a ride with them around their Cushing neighborhood, I am struck by the fact that Daggett has worked on nearly every house we pass. “We just replaced the roof there,” Chris says, indicating a charming shingled cottage perched right at the water’s edge. “Oh, and we put that addition on there.” Another solidly integrated structure. Unlike nearly every other coastal community in Maine, Cushing has preserved its architectural integrity. The houses are solid, beautifully proportioned, and integral to their respective spaces. The woodland around is dominated by beech, birch, and poplar, airy trees that let the light in, move with the wind. Around every corner is another expanse of mowed meadow accented at this time of year by red sumac at the far wood line. The vistas are accessible and domestic and harmonious, luminous in clear light. No wonder Cushing is home to so many artists.

There’s a lot of talk in the contracting business about customer service, but it seems to me what the Robinsons offer is old-fashioned reliability, even friendship. Crystal has a big box full of keys to all the local properties she and Chris caretake on a regular basis. “Sometimes it’s just checking after a storm,” she says, “but also, it’s being there for them. They know we care about their homes as much as they do.”