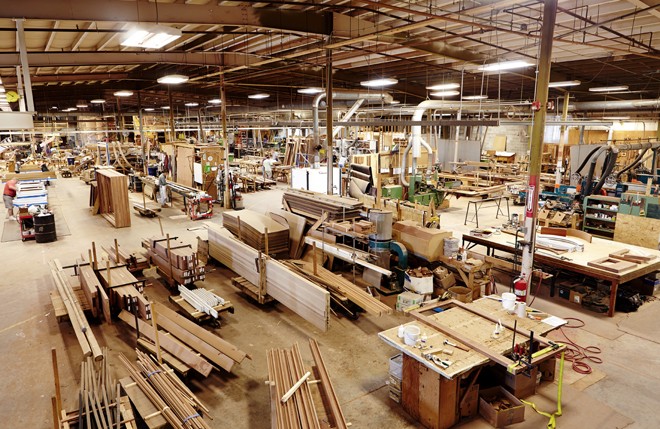 An overview of Duratherm’s 43,000-square-foot shop shows wagons of custom trim awaiting sanding and finishing. The room is full of custom window and door components of the finest hardwoods at various stages of Duratherm’s detailed and precise manufacturing process. The company’s participation in the international Forest Stewardship Council makes it a “chain of custody facility,” able to verify where wood comes from and how it will be used. 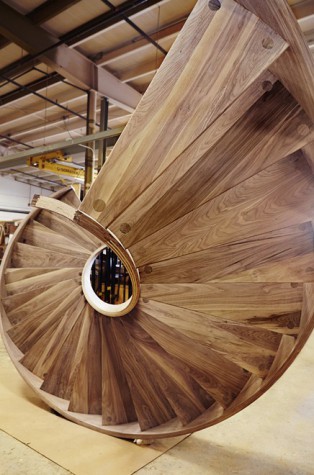 A York Spiral Stair constructed of walnut. Downing came to Duratherm in 1984 as a salesman for this product. 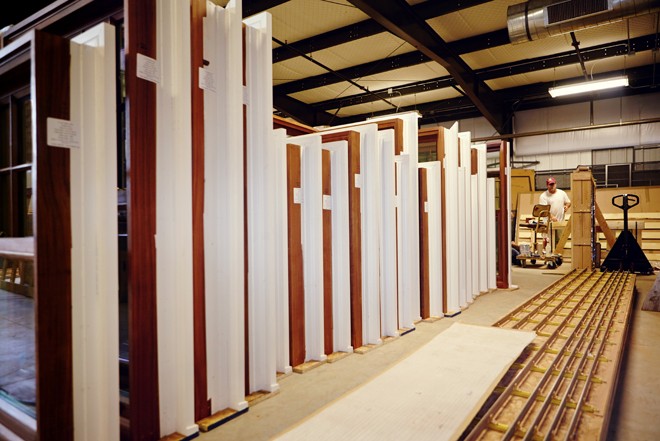 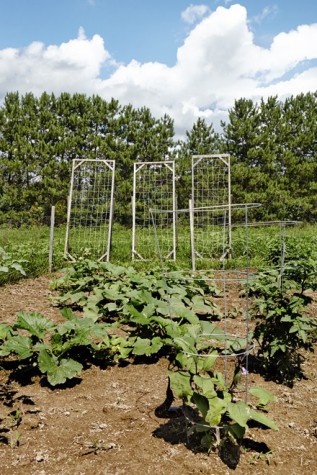 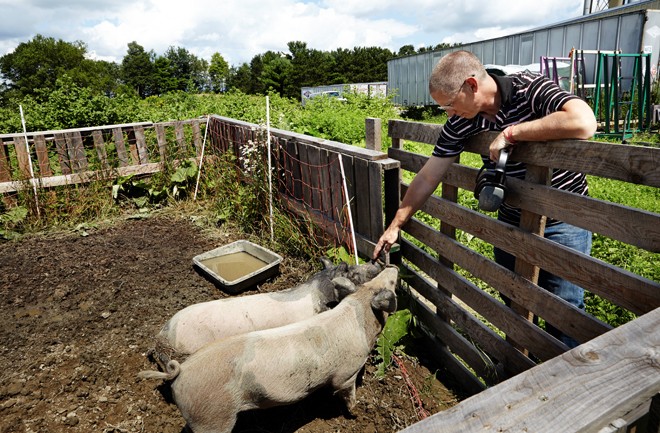 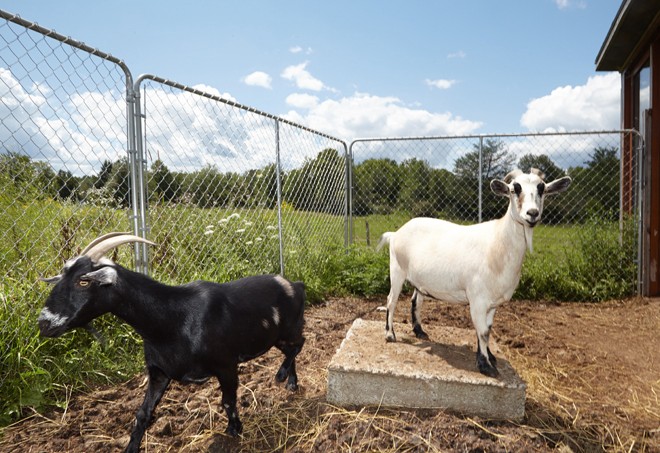 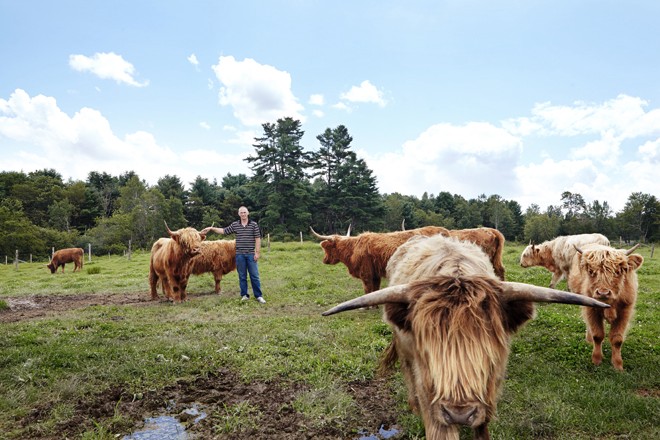 Duratherm president Tim Downing holds on to Oscar the bull in the meadow adjacent to the company plant in Vassalboro. In a good year, Oscar is responsible for adding four calves to the Highland cattle herd. 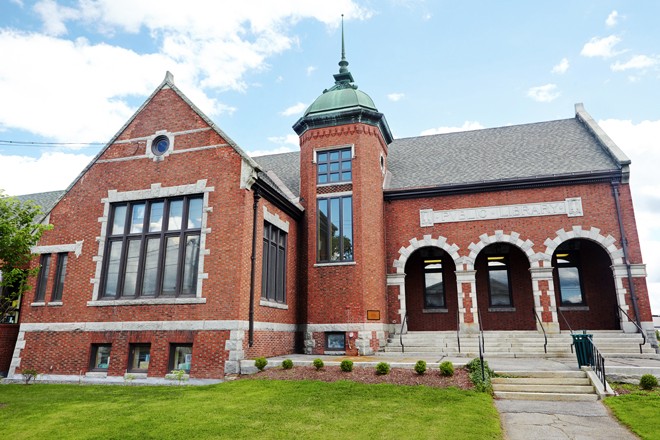 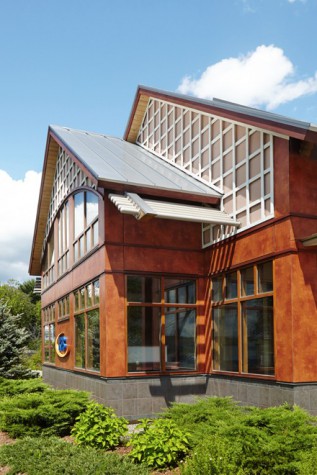 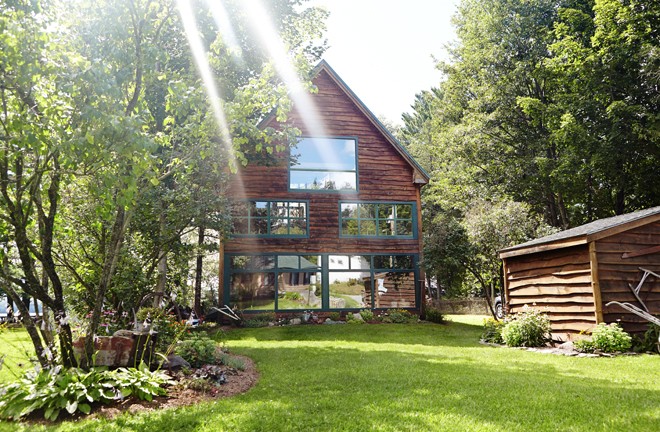 Downing’s Smithfield home is the center of his universe so to speak: when he graduated from college, he drew a circle encompassing 25 miles around the town of Smithfield where he had grown up to indicate just how far from home he was willing to go. Twenty-nine years later, he’s still in Smithfield—and his home enjoys beautiful Duratherm windows and doors. 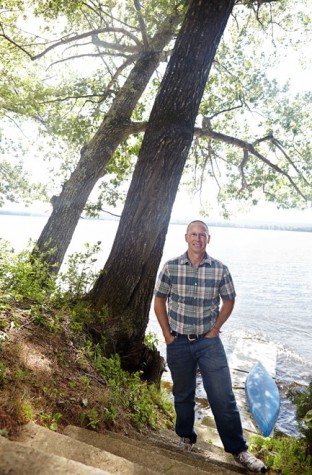 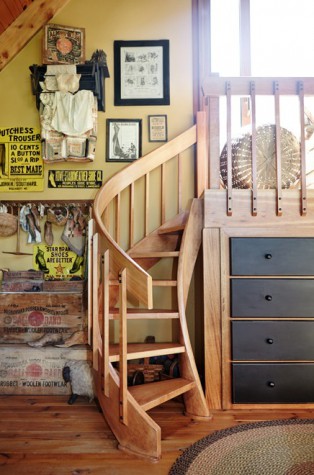 The sustainable life and business model of Duratherm’s Tim Downing

Tim Downing wasn’t sure what he wanted to do when he graduated from the University of Maine at Orono with a business finance degree in 1984, but he knew very well where he wanted to do it. He took out a map of Central Maine and drew a circle encompassing 25 miles around the town of Smithfield, where he had grown up. That was it. He was not going far from home. One radius intersected Duratherm Window Corporation in Vassalboro, a manufacturer of finely crafted custom wood windows and doors for use in commercial, residential, and institutional buildings, founded by Phil Cole in 1967. Within weeks of graduation, Downing was the company’s York Stair salesman; ten years later, he was president. He’s still there (29 years later) and he still lives in Smithfield.

Sitting at a solid teak table that mirrors the teak-framed Duratherm windows of the company’s conference room, Downing positively radiates passion. He’s wiry and muscled. His shaved head gleams. Rimless glasses highlight dancing eyes above a big, toothy grin. This guy is glad to be alive, blessed to be doing what he loves, bursting with energy to tell me all about it. His story is well punctuated with appreciation of and homage to the Cole family, who not only founded this company but also put it unequivocally into his hands in 1994. “‘Run this company just like it was yours,’ they told me,” Downing says. “They never second-guessed anything I did. It’s humbling. That’s what builds loyalty. One day,” he goes on, “Phil called the office and I was out. ‘Where is he?’ Phil demanded.’” When Downing later called to say he was home tending to his frozen pipes, Cole said, “’Hire a plumber, man! We need you to run the store!’ That’s the only time he ever questioned anything I did,” Downing laughs.

Sustainability is key at Duratherm. “Right from the beginning,” Downing says, “we were committed to building a ‘life cycle’ product. We wanted to build a window with prudent use of wood, teak for the exterior both for longevity and low maintenance.” A Duratherm teak window installation in 1981 at the University of Nebraska’s Wick Alumni Center was still intact and waterproof after 30 years with no maintenance when examined in 2011. Duratherm got the contract for simply refinishing the teak. “The half-lapping trim and precision joinery allow for a window that is not only waterproof but also designed to last as long as a building stands—50+ years,” Downing says. “That gives time for the forest to replenish. In 50 years, there is another tree. That’s a renewable resource.” The company also participates in the Forest Stewardship Council (FSC), an international not-for-profit, multi-stakeholder organization established in 1993 to promote responsible management of the world’s forests. Its main tools for achieving this are standard-setting certification, and labeling of forest products. The organization aims to provide businesses and consumers with a tool to influence how forests worldwide are managed. “We’re a ‘chain of custody facility,’” Downing explains. “Our processes for tracking FSC-certified woods are audited annually to verify where the wood comes from and how it will be used.” Duratherm windows and doors are part of some notable U.S. buildings, including the Phillips Exeter Academy library, the Ronald Regan Presidential Library, and the Pro Golf Hall of Fame. Its products are also used extensively in custom residential installations all across the country.

“Sustainability,” Downing wrote in the company’s newsletter, The Duratherm Communicator, “embodies prudent stewardship, relevance, and designing with nature in order to meet present needs without compromising the ability of future generations to meet their needs.” And it goes hand-in-glove with another important Downing tenet: servant leadership. Traditional leadership generally involves a top-of-the-pyramid paradigm with power trickling down. The servant-leader model shares power and puts the needs of others first, which helps people to reach their full potential. Prominently displayed on the wall of the company’s 43,000-square-foot plant is the Duratherm Window Corporation Servant-Leadership Organizational Chart superimposed over Fenway Park, home of the Boston Red Sox. “Servant-Leader Downing” is behind home plate, backed up by vendors and professionals; on the mound is Gary Bulmer, financial assistant and human-resources manager. Each “team player” is identified by name, position, and years of service. The team is strong in both the infield and the outfield. As Downing puts it, “Are you willing to be the type of leader who is willing to prepare the way, develop future leaders, and assure consistency and continuity long after your tenure has concluded? This is true sustainability. In forestry that translates to planting a tree today even if you won’t be the one to harvest it tomorrow.” On the Duratherm Fenway organizational chart, this notion plays out a little like “Moneyball,” as Michael Lewis called Billy Beane’s sabermetric approach to scouting and analyzing players. “Win/win,” Downing grins.

Downing is dedicated to Duratherm’s “community,” to making them genuine “sustainability pioneers.” Following Joel Kotkin, he embraces the business trinity of manufacturing, agriculture, and energy. “It’s what made the U.S. economy strong,” Downing states. He focused first on the manufacturing aspect of this triptych. Today all 70 of Duratherm’s employees have 100-percent health insurance coverage as well as a contribution toward dependents. Also under the employee-welfare umbrella is an employee-assistance program, company-sponsored wellness program, and company contributions to a health-savings account as well as a three-percent 401K contribution that does not require an employee match. “During those bad years of 2008-2012, when the economy and our industry suffered,” Downing states, “we never laid off a single employee, and we always paid an annual bonus.” The State of Maine recognized Duratherm with its 2011 Governor’s Award for Business Excellence, stating “these companies characterize what it is that makes a business not only great to work for, but a true asset to their communities.”

Next, Downing turned his attention to energy. By installing a wood furnace, replacing the plant’s oil boiler with a Maine Energy Systems pellet boiler, and adding foam insulation to the building and air-return ductwork, Downing has brought Duratherm very near to being a fossil-fuel-free facility, thereby reducing overhead costs and dependence on non-renewable fuels as well as eliminating environmental hazards from the site. A south-facing Solarwall provides for 35 percent of Duratherm’s finish room BTU needs. He traded Duratherm’s LP (liquid propane) forklift for a high-tech electric forklift, thus eliminating the LP expense, $100 per week, in favor of electrical charging that costs $1.21 every two weeks. Likewise, the tons of sawdust generated by the company’s millwork—which had to be collected, contained, and trucked off site—have been recreated into Durabriques, a compressed sawdust fuel product about the size of a soup can. Durabriques—unlike pellets, which are pre-sold by distributors (often with the stove)—are sold directly from the factory and can be used in fireplaces, wood stoves, and multifuel boilers. The company installed a briquette press into which the sawdust is fed, a potato bagger and stitcher from a retired farmer for enabling the use of biodegradable (or burnable) bags, and they were in business. “The plant’s a lot cleaner, too,” Downing says. “When everyone realized a pound of sawdust is worth ten cents, they began sweeping up real careful.”

The agricultural part of the trinity has been the most fun. Downing wanted employees to have access to healthy, organic produce, so part of the acreage behind the plant is now devoted to a garden tended and harvested by employees. There are chickens whose eggs go to the staff. And there’s a herd of Highland cattle, big-horned, shaggy Scottish cows. The coat makes them a good breed for cold northern climates and they are able to thrive in outdoor conditions that would defeat most other breeds of domestic beef cattle. Duratherm’s 11-cow herd is entirely grass-fed, and because Highlands get most of their insulation from their thick coats (rather than subcutaneous fat), their meat tends to be leaner. Oscar, the bull, comes up to Downing’s call, rubbing his massive head against the fence. “When he’s doing his job,” Downing says, “we can have as many as four calves a year. Last year, he slacked off some and we had only one.” But Oakley, a young rambunctious bull who knows how to jump the fence, is coming up fast. They slaughter one or two each year and the packages go into the employees’ Meat Raffle. “If your name is drawn early,” Downing laughs, “you’re going to go home with tenderloin. Later, hamburg or liver. But it’s different every year and every year, everyone gets some.”

Standing next to the fence, rubbing the head of a Highland bull, Downing appears fully at home in the world. Asked how it’s possible to have achieved such an amazing business/life model, Downing just smiles. “It’s about identifying wants from legitimate needs and then fulfilling those needs,” he answers. “Who wouldn’t want the best for their families, their friends, their fellow workers, and customers?” Clearly, Tim Downing does.