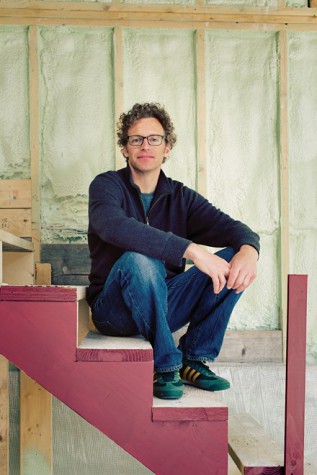 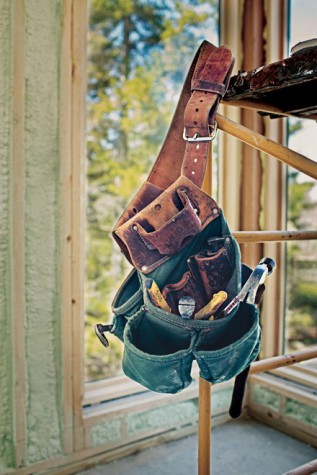 Foreman Alden Strong’s tool belt inside the Bar Harbor  home under construction. Peacock  prizes and praises his crew: “The  autonomy of the foremen is key.” 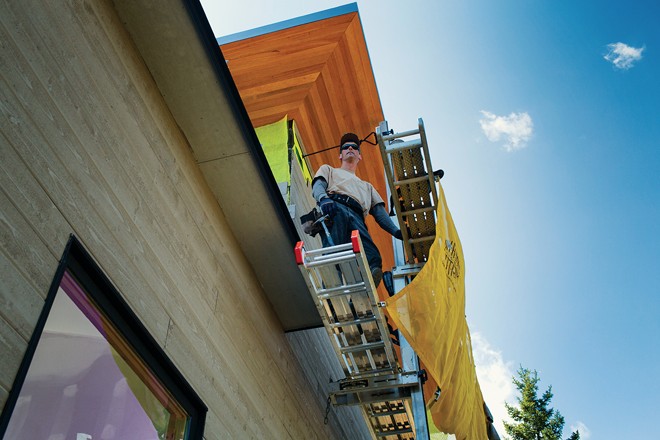 Green Zip hybrid wall sheathing provides a thermal break with an inch of rigid insulation attached to the back for this George Gekas–designed home Peacock Builders is constructing in Bar Harbor. Douglas fir soffits finish the roof. 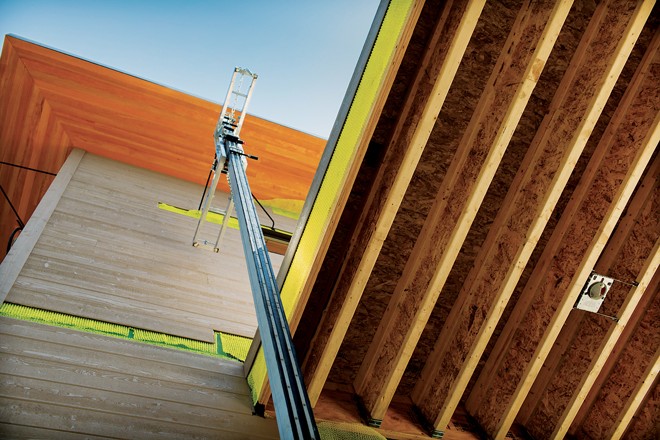 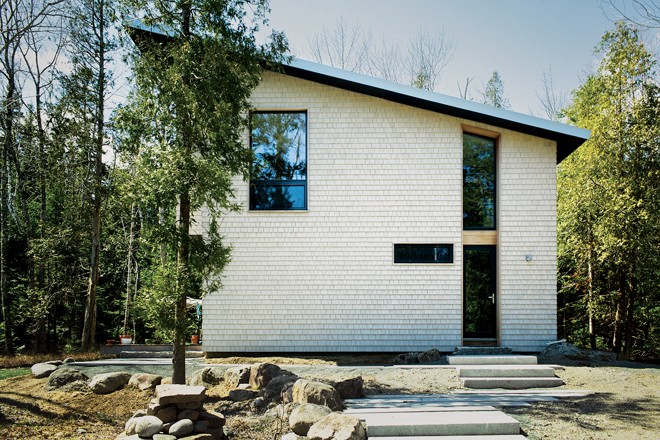 Peacock’s Lamoine home designed by architect Bruce Norelius. The windows and door were imported from Poland. “It was worth going abroad for high-performance windows,” Peacock says. “We were able to obtain triple-glazed windows at the same price as North American double-glazed.” The house also features a metal roof. 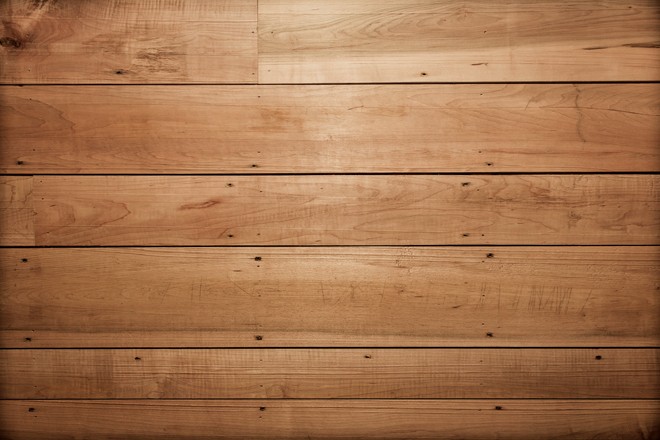 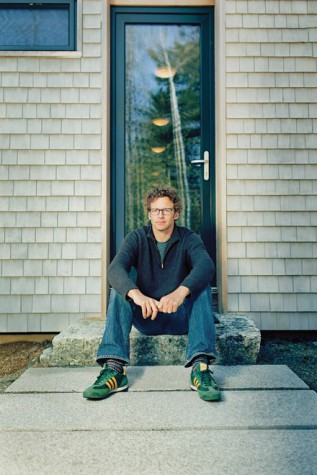 Tobin Peacock sits on the granite threshold of his own home in Lamoine. The siding is bleached cedar shingles. 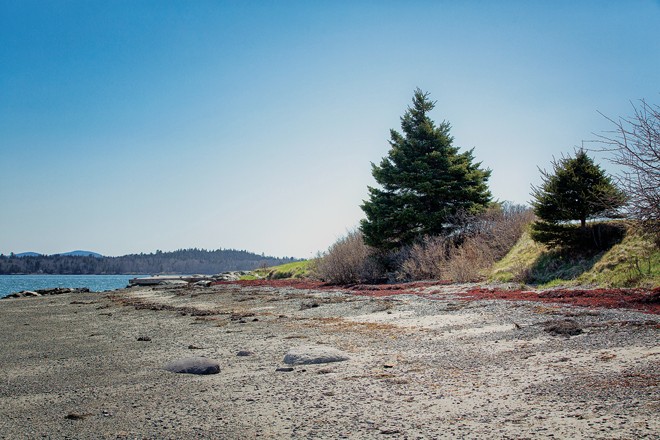 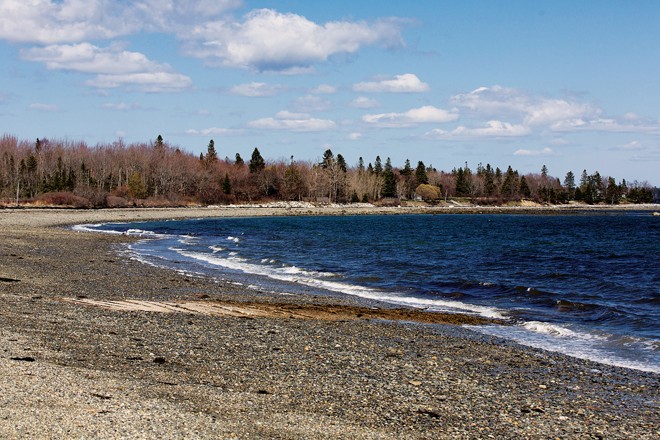 Tobin Peacock is an architect’s kind of builder

Peacock Builders is rendered in a spare, clean typeface, bold cerulean and black on white, mounted above the door of a rustic garage in the Town Hill section of Bar Harbor. The sign is understated, not centered on the structure, not too big, but sure. Its authority is reinforced when you walk around the back of the building to the office: steep but seriously functional open-grate steel stairs lead up to Tobin Peacock’s sleek white second-story work space. No clutter. Generous tables for spreading out designs. Lots of light. No evidence of the acclaim already garnered by this young man.  No framed copies of glowing national press praising the innovative building Peacock has accomplished.

On the first real day of spring at the end of April, Peacock has the doors wide open to let in the welcome soft breezes. He’s a courteous man whose boyishly curly hair makes him appear younger than his nearly 40 years. Tall and slim, he’s casually dressed in jeans and a fleece. His finely chiseled features are modulated by a wide, full-lipped smile and serious but not trendy black glasses. Long-fingered and strong artist’s hands complete the impression of someone physical as well as cerebral.

Born in England and raised in Sherbrooke, Quebec, Peacock came to Bar Harbor in 1992 as a student at College of the Atlantic.  He was drawn by the school’s emphasis on human ecology, the interdisciplinary and transdisciplinary study of the relationships between humans and their natural, social, and built environments. He had the advantage of his experience in the Canadian educational system, which focuses students early, as well as having been raised by parents who were teachers. “Growing up with teachers as parents,” Peacock says, “you might say I had no choice but to participate in my education. They taught me the importance of learning, and I feel that, if my work did not provide me the opportunity to keep learning, it would not provide the satisfaction that I derive from it. ”

Architect George Gekas of Bass Harbor, who has worked with Tobin Peacock on a number of projects, notes Peacock’s responsiveness: “The one thing that always impresses me is his understanding for architectural dialogue. It’s obvious from our discussions and his personal worldview/experience that it goes beyond what is the norm.” One of their first collaborations—a term Gekas is careful to use when describing his experience with Peacock—was featured as a full-page spread on the cover of the New York Times Home section in 2011.

That’s quite an accomplishment for a young man who began his working career as a caretaker on White Island in the Isles of Shoals, where he was also a handyman and lobstered. From those endeavors Peacock took away valuable lessons: responsibility, resourcefulness, and on-the-job training. He began his career as a builder small—decks, replacement windows—paid attention, and gradually began taking on bigger projects. He was recommended to complete a new house halfway through construction in Steuben. “We had a bad experience with a previous contractor and were traumatized from that when Tobin came on the scene,” says client Sandra Robishaw. “Tobin spent a lot of time patiently listening to us and acted as a collaborator to revise the architects’ original plans.” Peacock was on his way. He incorporated Peacock Company in 2002, and in 2004 he poured the foundation for his first solo project. To date, the company has completed 16 buildings and numerous additions and renovations in Hancock County, several of them garnering excellent press in both national and local publications.

Phil Kaplan of Portland’s Kaplan Thompson Architects, a firm dedicated to sustainable building, recalls seeing Tobin Peacock for the first time at the Northeast Sustainable Energy Association conference in Boston in 2011. “Here was this builder in attendance,” Kaplan says. “Maine builders just don’t show up at things like this. We said, Who is this guy? We need to get him on our radar.” Once Kaplan Thompson made the connection with Peacock, they were astonished to find that the young man was so capable of building high-end, affordable structures. “The fact that he embraced contemporary design, especially in a setting like Mount Desert Island—old school, traditional—signaled to us the bold nature of his commitment.” Kaplan, like Gekas, emphasizes the open nature of communicating with Peacock. “He not only understood what we wanted to do, but advanced the conversation,” Kaplan continues. “We definitely had a much smaller learning curve working with Peacock Builders than most in our experience.” Peacock is currently at work on a net-zero-energy house for Kaplan Thompson in East Blue Hill.

Peacock’s emphasis on collaboration extends to the importance he places on his crew. He presently employs nine carpenters on-site, with three foremen. “I have a great crew, very capable foremen, and an excellent group of subcontractors doing the groundwork to enhance and maintain the Peacock Builders reputation,” he says. “The autonomy of the foremen is key,” he continues. “I know I can trust them to make the right decision when one is needed instantly.”

Gekas concurs with Peacock’s philosophy. “Having been a builder myself, I have an intimate knowledge of what paying attention to detail means and how it translates to the success of a project,” he says. “From this perspective, there are no shortcuts, so it’s a pleasure and also a confidence booster to work with a crew who is just as adamant as I am in that regard. I always feel my baby is in good hands with Peacock Builders.”

I’m impressed by the site when Peacock takes me up to one of his current projects, a house designed by Gekas on a hillside in Bar Harbor with views to the mountains. Although the place is abuzz with saws and Peacock’s crew is busy in nearly every room, I don’t sense the kind of frenzy and disorder I’m used to on construction sites. The house—which is drywalled and has doors and windows in at this point—is broom clean; there are no food containers scattered around, no loud music is playing; the harmony of the design and landscape already permeates this developing structure. In one room, someone has swiped a big wash of burgundy color on the wall, obviously experimenting with paint. It’s labeled “Stolen Kiss.”

The natural environment is important to Peacock, a priority nurtured by College of the Atlantic. He’s been on the board of the Frenchman Bay Conservancy for the past six years. “The natural landscape is a huge component of what makes Maine special,” he says, “and I believe in the importance of land preservation for now and the future.”

Recently Peacock and his wife, Val, spent some time on Salt Cay in Turks and Caicos. His beach reading was Salt: A World History by Mark Kurlansky; even on vacation, his focused intellectual curiosity and sense of place are sharp. Currently, he’s reading The Better Angels of Our Nature: Why Violence Has Declined by Steven Pinker. In this book, Pinker emphasizes four important human traits: self-control, empathy, morality, and reason. Everything suggests these are tenets Tobin Peacock takes to heart and puts into practice.

“Sometimes I wish he wasn’t a builder,” architect Gekas muses, “and would come work with me—but then who would we find to build the places?”