From Foundation to Furniture 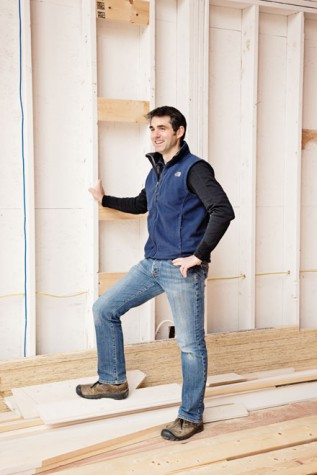 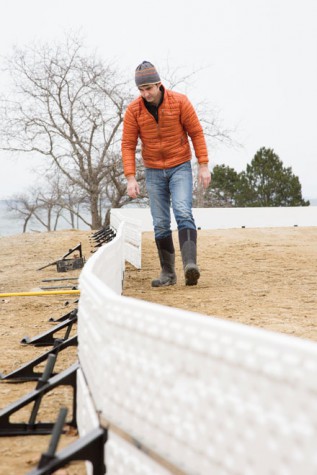 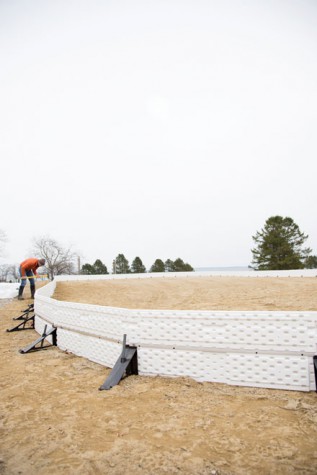 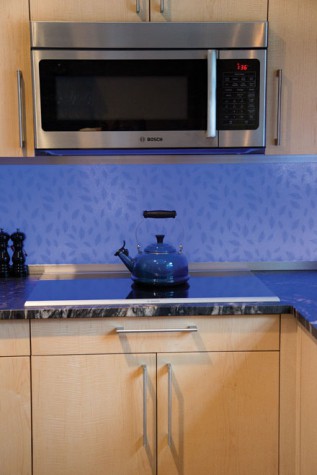 A Victorian-style maple spool bed rendered in white lacquer features authentic “rope holes” along the rails: before box springs, ropes were strung through the holes to hold the mattress in place. 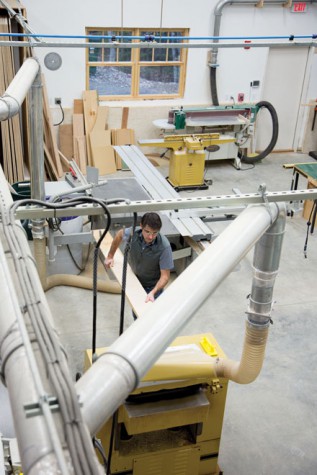 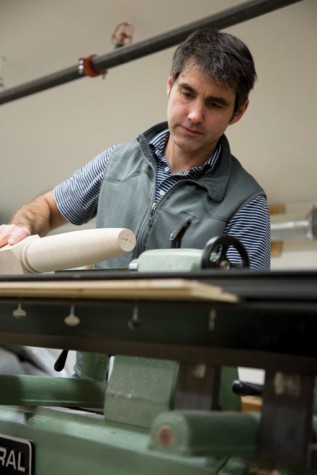 Michael Roy turns a bedpost on a wood lathe. 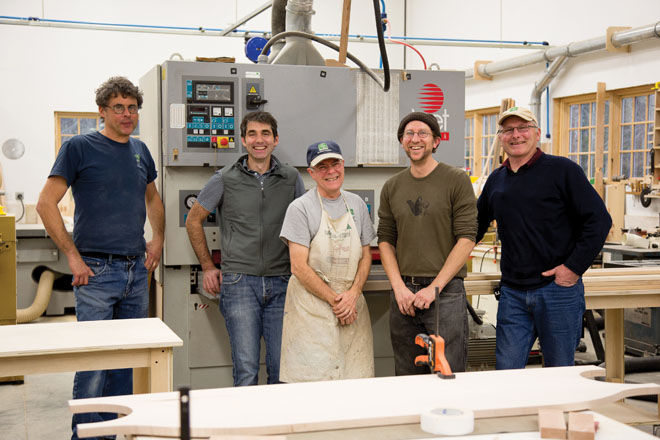 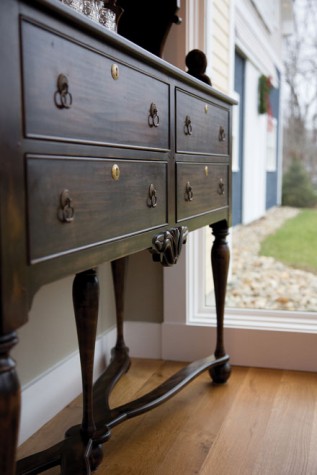 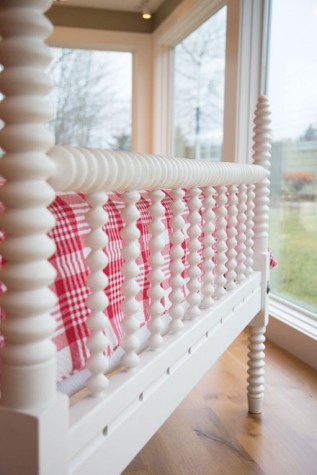 With its sleek, curly maple cabinetry, titanium granite countertop, and lighted resin backsplash, the office break room (which is open to visitors) offers an edgy counterpoint to the traditional, embellished furnishings arrayed in the showroom out front. 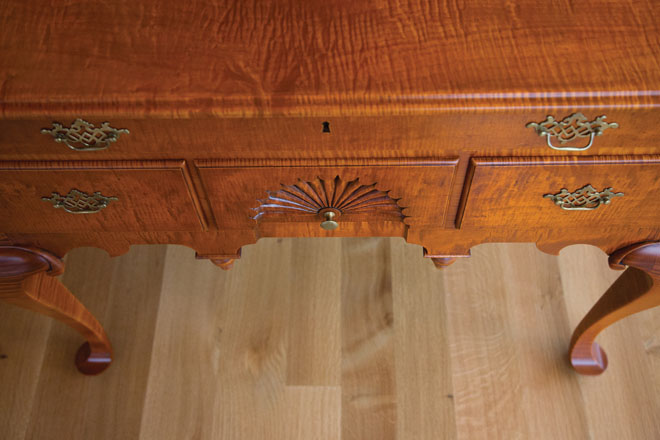 A rich amber stain topped with hand-buffed shellac brings out the intricate, tigerstripe markings on a curly maple lowboy. 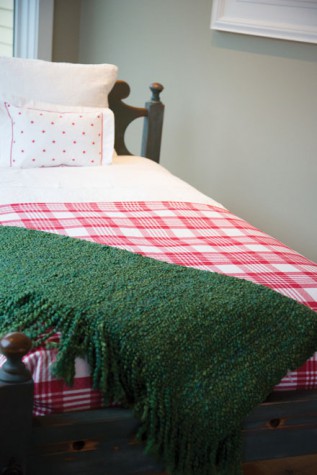 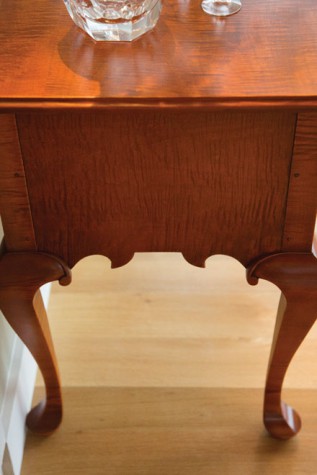 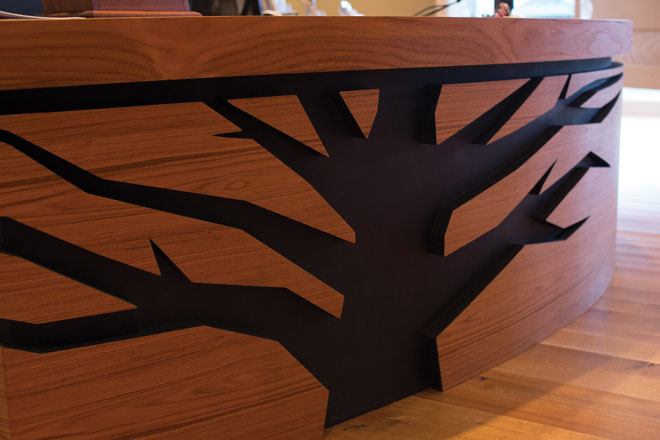 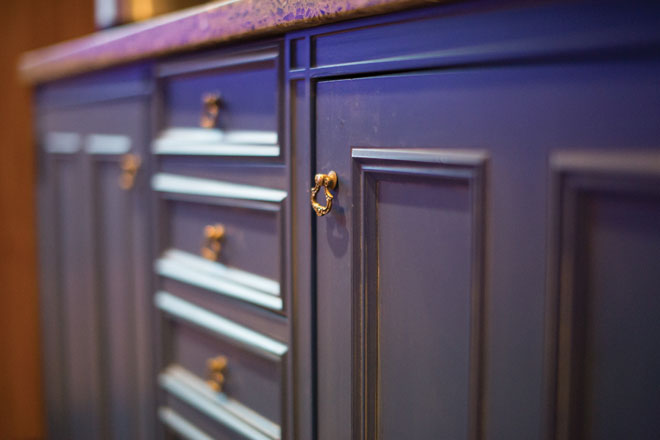 A freestanding, lacquered cabinet in the break room is finished with jewelry-like brass pulls and a glittery recycled-glass countertop. 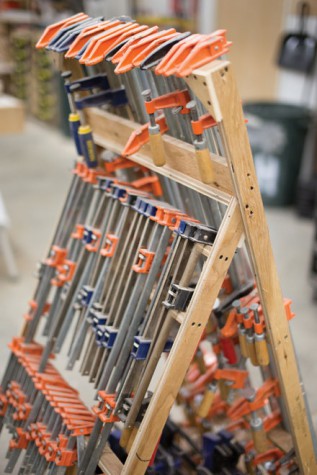 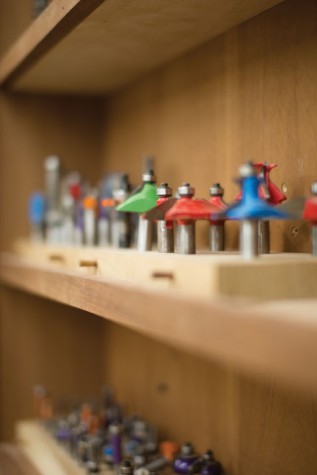 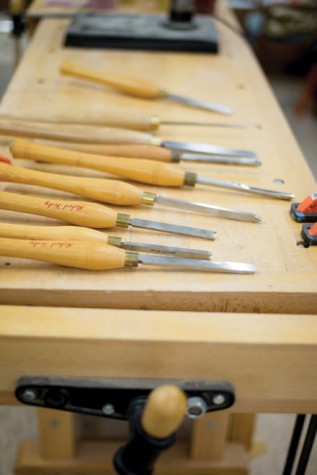 A set of turning tools used to shape furniture pieces on a wood lathe. 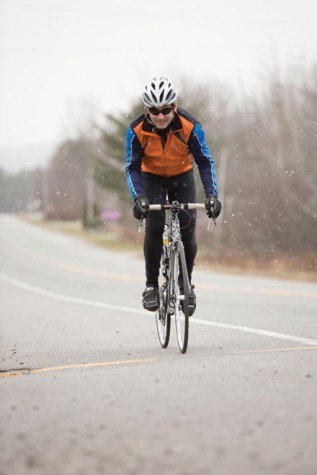 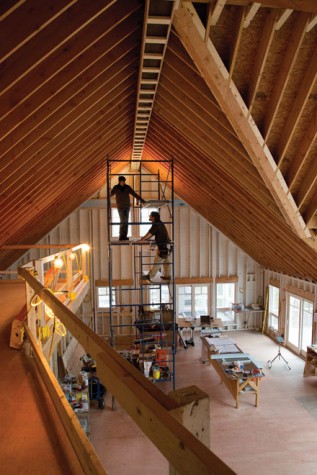 The soaring great room of a home Roy is constructing in Owl’s Head, viewed from the mezzanine. 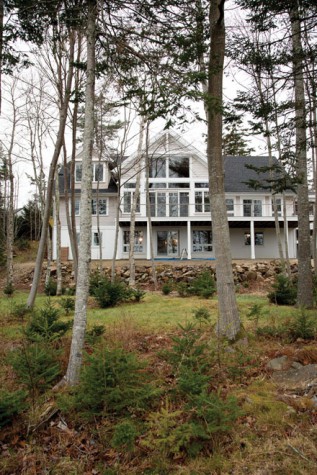 Builder Michael Roy designs homes and custom furnishings the way he appreciates life—with a sharp eye for detail and a hands-on approach.

Late last year, Michael Roy met with a couple to discuss plans for a custom farmhouse table. Three months later, he delivered something quite different: a glossy, Biedermeier-inspired design with a rounded rectangular top, four columnar legs, and a curvaceous pedestal base.

After having seen sketches of the initial concept, Ken Gaulin and Michael Putnam, who own an eighteenth-century Cape in Rockport Harbor, had an idea for a more ornate table with graceful lines that would offset a grid of windows in their dining alcove. Roy and his team at Phi Home Designs in Rockport then worked with them to refine their vision, creating more than a dozen computer renderings, sifting through finish samples, and even making plywood mock-ups of the tabletop to test out in the space. When the completed piece crafted from delicately striped curly maple finally emerged from the workshop, “it seemed like a small miracle,” says Gaulin, “that after all the back-and-forth we have this piece that fits so beautifully in our home.”

Roy takes pleasure in aspects of design—and life—that others might find headachy. “The project with Ken and Michael was cool because the concept evolved so much and we were able to help lead them to what they really wanted. We met every week to get the details right, and that’s what’s fun: putting those details together to create a signature piece.” Consider how much time went into one table and “you can imagine what’s involved when we do a whole home,” says Roy, referring to the construction arm of his business. “It’s a lot, but most of our clients really want to be engaged in the process, and we like having that close interaction.”

Customers can choose to design and build a home with Phi or just use their general contracting services. In both cases, the company typically supplies custom kitchen cabinetry, along with other furnishings. Since moving to a new 11,000-square-foot facility last July, the company has also been able to reach more clients, who, like Gaulin and Putnam, want to design a one-of-a-kind furniture piece. The Colonial-style building features a light-filled furniture showroom with items ranging from a hand-carved maple lowboy atop willowy cabriole legs to a reproduction early- American bed with an artfully worn milk-paint finish. There’s also an expansive workshop in an attached barnlike structure. “So now homeowners can come in and see samples of our work, which they couldn’t do before, and we can handle more volume,” says Roy.

Expanding the furniture end of the business feels like returning to his roots. Roy started out working for a furniture maker in Connecticut, where he grew up, and later ran his own custom cabinetry and furniture shop there. In 2003, after relocating to Maine, he cofounded Phi with a focus on made-to-order furniture. That work led to creating built-ins and kitchen cabinetry for clients, and eventually to designing and constructing houses. “But in many ways my passion remains in furniture,” says Roy. “A bed, a chest of drawers—those are things people take a lot of pride in, and we take a lot of pride in creating them.” Each piece is handcrafted in the workshop using traditional methods of joinery. And if you’re curious about what exactly goes into making a hand-cut dovetail or mortise-and-tenon joint? “We encourage people to stop in and see the work in progress,” says Roy.

When he’s not at work, Roy likes to, well, work. He and his wife, Kate, recently started a farm with a large vegetable garden and 27 chickens on their 18-acre property in Northport. He also pitches in at his in-laws’ cattle farm down the street. “I have farm chores to do in the morning and on weekends,” says Roy. “To know I have to leave work and go haying for the evening or help my father-in-law frame a barn on a Sunday—I love that. My outlet is getting outside and being active.” He and Kate are also avid road and mountain bikers and like to head out into the woods around their property to clear trails.

Another favorite hobby (not to be confused with work) is installing and maintaining ice rinks. Each winter, Roy puts in a 28-by-52-foot backyard rink, complete with a liner and plastic sideboards, for his hockey-playing daughters, ages 14 and 11. Phi is also a distributor and installer for NiceRink, the company that manufactures the components. Since 2011 Roy has raised money to fund a public rink in the Camden Amphitheatre overlooking the harbor. And last November he laid the groundwork for a rink at the Samoset Resort in Rockport. Filled in with a smooth sheet of ice and set against the blue-gray backdrop of Penobscot Bay, the structure will have the effect of a frozen infinity pool.

For Roy, actually skating on the ice is beside the point. “I like taking care of my home rink, and having it available for my girls and their friends, more than I like using it,” he says. He shovels the ice after each snowfall and polishes it several times a week with a handheld resurfacing tool that works like a Zamboni. “It’s peaceful being outside when it’s 10 degrees, putting a hot layer of water down and watching it freeze up into this immaculate surface,” says Roy. “And then to hear your kids out there playing and having the best time—it’s an amazing feeling.”

The process is not so different from the one he follows at Phi: helping a project take root, nurturing it into something beautiful, and handing it off for someone else to enjoy.