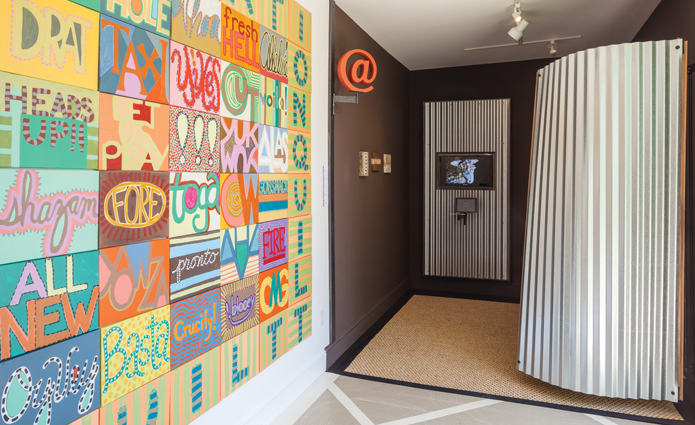 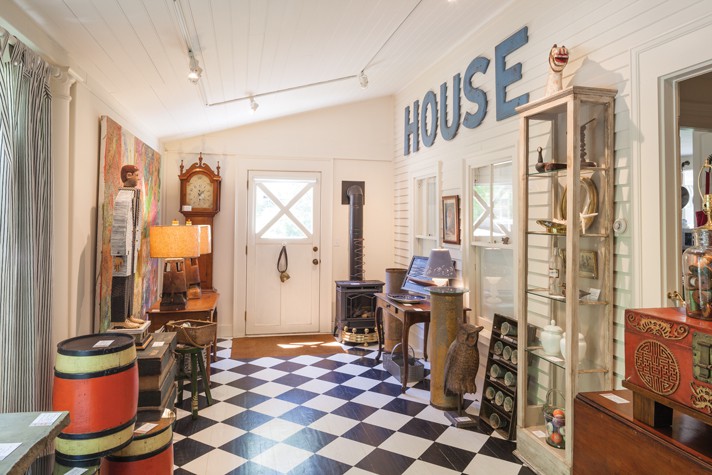 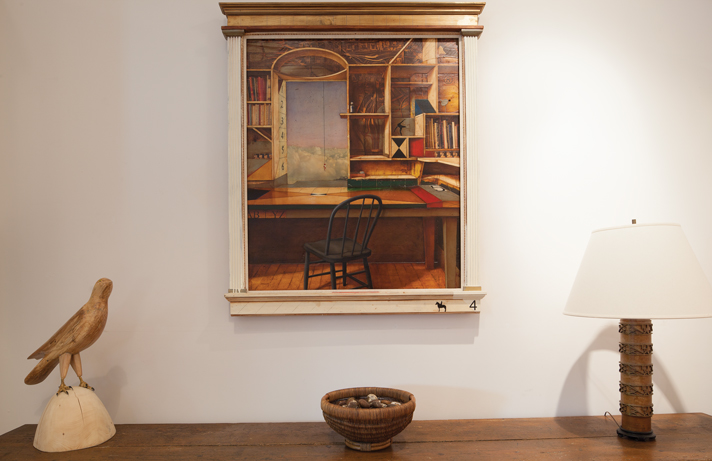 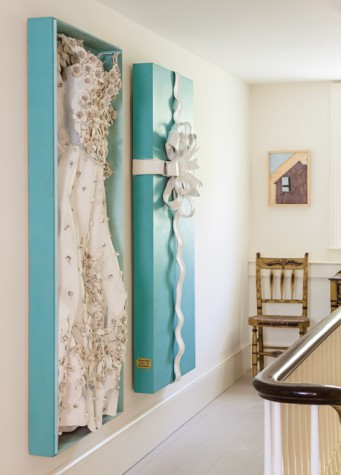 Brian White, the artist who created this wedding gown, will have a show in the barn gallery starting August 3. 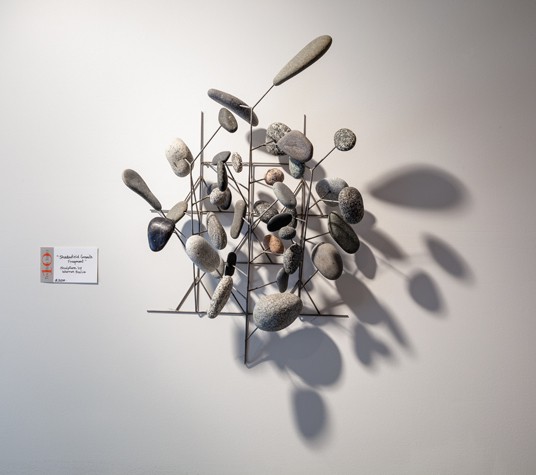 In the right light, Warren Seelig’s Shadowfield Granite Fragment multiplies on the wall. 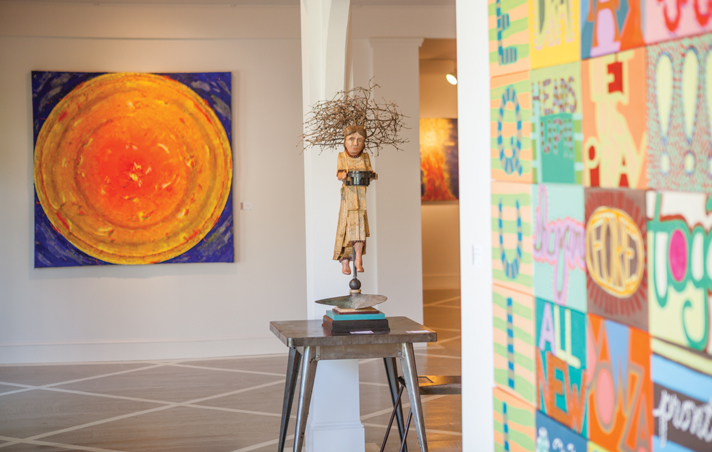 Inside the barn, a wooden sculpture by Harvey Peterson tiptoes between Rosi Reed’s Sun and Pamela Nelson’s Exclamation Quilt. 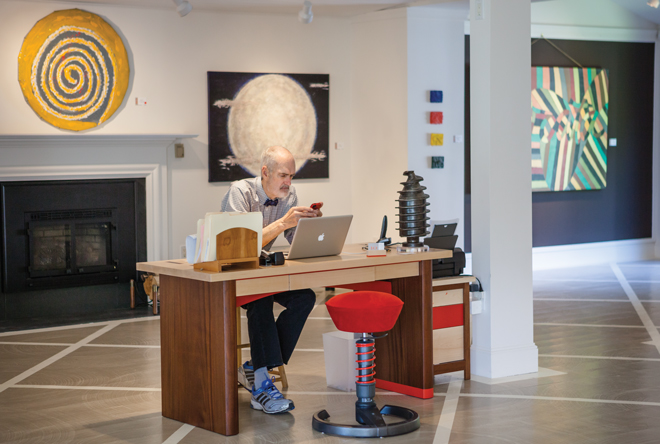 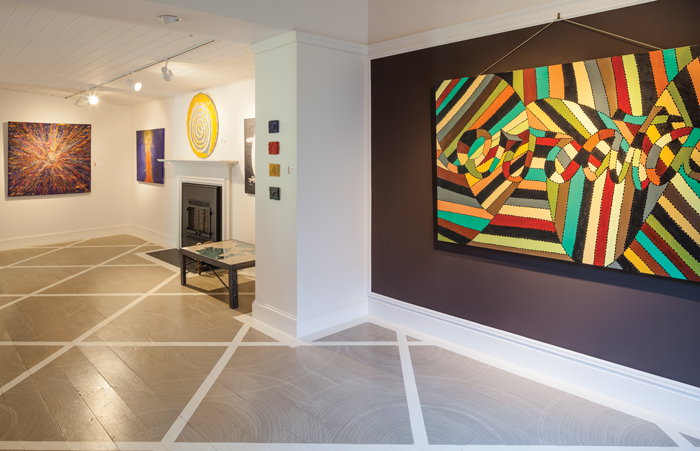 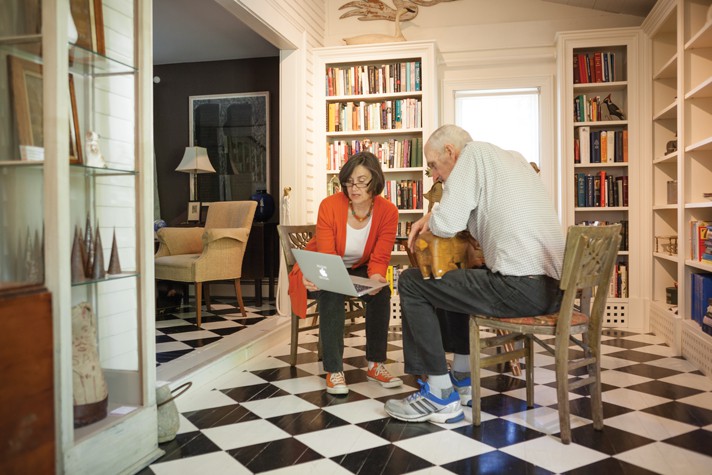 John and Sarah Ames, pictured in the antiques shop in their home; the rabbit-shaped saw on John’s lap is among the items for sale. 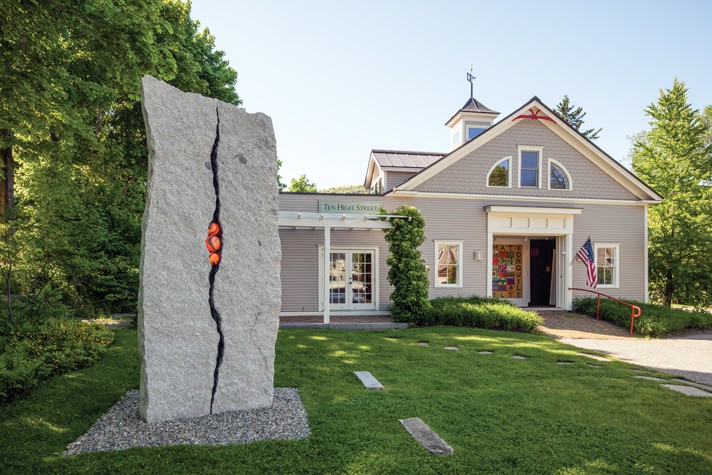 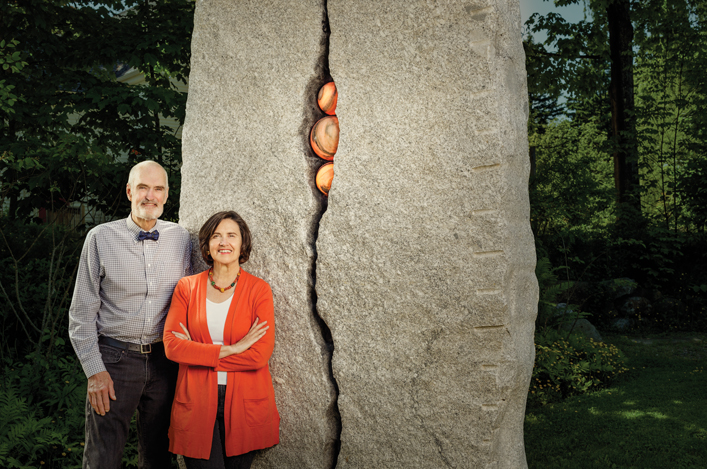 You’re invited to view the intriguing, ever-changing array of art and antiques inside the Camden home of John and Sarah Ames

John and Sarah Ames don’t just live above the shop, they live in it. The owners of Ten High Street have dedicated a long room in their 1820 farmhouse on Route 1 in Camden to the sale of antique furniture, ceramics, and curiosities. The adjoining living space, separated only by a brief step up, is similarly furnished with period pieces. At the back of the house, the line between the kitchen and a pair of airy art galleries showcasing vibrant oils is more sharply defined: a rope hangs across the doorway with a sign that reads, in French, Attention Femme Mechant (Beware Evil Wife).

The warning is a joking reference to a marital dynamic—Sarah’s desire to declare certain items off limits to buyers, and John’s enthusiasm for selling just about anything. “Sarah’s a nester, and I’ve learned that, when you live with a nester, you never want her to come home to an empty space she wasn’t expecting to be empty,” says John, referring to the time he sold a prized early-twentieth-century phrenology head that had been displayed in the couple’s living room. Coffee tables have also had a way of disappearing. “It’s tricky because we live literally among things that could be for sale,” says John. “Customers can get in and out of the public areas without ever entering the nester’s domain, but sometimes we invite them in for coffee. And sometimes they’re looking for a coffee table—however, I respect Sarah’s perspective and we now do everything cooperatively.”

In addition to the exhibit spaces in their home, the couple maintains a third art gallery in an 800-square-foot barn on the property. A brightly colored acrylic by the artist Pamela Nelson is framed in the massive, square doorway. Titled Exclamation Quilt, the painting features a patchwork of words and phrases, such as “Fresh Hell” and “OMG.” Throughout the barn, similarly arresting works by Nelson—along with glowing, mixed-media celestial pieces by another artist, Rosi Reed—seem to leap from the walls.

In a former life, the barn was filled with antiques. Sarah’s aunt and uncle operated their business, Schueler Antiques, out of the building and lived in an apartment upstairs. The house where John and Sarah now reside was a rental property. When the couple took over the company in 2002, they renovated the house and integrated the two buildings. The goal: create a home for themselves (Sarah’s aunt still lives in the barn apartment part of the year) and more space to expand into art, a shared passion.

John previously owned a successful gallery in Belfast and Sarah spent 25 years working for organizations such as the Center for Maine Contemporary Art in Rockport and the Farnsworth Art Museum in Rockland. They were searching for space to start a gallery together when the opportunity to buy Schueler Antiques came about. “It was wonderfully serendipitous,” says Sarah. “We had the chance to run a family business I had always loved and see what we could make of it.”

Sarah’s grandmother, Lillian B. Schueler, started the company in 1947 after her husband died. “She needed to support herself and the only thing she really knew about was antiques; she had collected a lot of nice things,” says Sarah. Schueler talked her way into the Winter Antiques Show in New York City, where she lived at the time, and sold the contents of her living room as seed money for a shop in Maine, a favorite vacation spot. For more than three decades, she presided over Schueler Antiques, which was then located a mile north on Route 1. The merchandise occupied a barn and the first floor of Schueler’s home, and she lived upstairs. “I remember she would stand at the juncture of the barn and the house, always wearing pearls and heels, cigarette in hand, and if she liked the looks of you, she’d say, ‘There’s more in the house.’ And if she didn’t, you never got out of the barn,” says Sarah.

These days, of course, anyone can wander through the main displays. And yet, “I’m like Lillian Schueler when it comes to showing certain things,” says John. One particularly special piece is a five-foot-tall, plaster-and-cement wedding gown decorated with pearls and shells and nestled in a Tiffany box. The eye-popping work, which hangs in the couple’s upstairs hallway, is by Brian White, one of the first artists they booked when they acquired the company. “The dress is for sale, but we don’t show it a lot because I don’t want it to get shopworn and overexposed,” says John. “And I want to make sure it goes the right buyer, someone who truly appreciates it and will lend it back to me when we have Brian White shows.”

The highly personal nature of the business has been a major factor in its success, says John. “To be a good art dealer, you have to sell what you like. In our case, we can’t get away from the things we sell, so if we didn’t like them it would rip us apart and make us terribly hypocritical.” Currently, you can find a nineteenth-century French side table and ornate Staffordshire plates intermixed, in the antiques area, with a statue of a man in a zoot suit and a rabbit-shaped wooden saw (John’s favorite piece). In the in-house art galleries, seascapes by Donald Demers and impressionist-like oils by Jessica Stammen offset the modern works arrayed in the barn. “Our taste is eclectic and, hopefully, interesting enough to keep people coming back, even if they thought something we did was god-awful,” says John.

Ten High Street is open from late May to early October. In the off-season, the Ameses plan the next year’s exhibits, travel the country on antique-buying trips, and turn the two connected house galleries into a living area with furniture they pull out of storage. “Things are always fluid, but we make it work,” says Sarah. “We won’t always do this and then it will be quiet.”

For now, says John, both parties agree: “We’re having a hell of a lot of fun.”