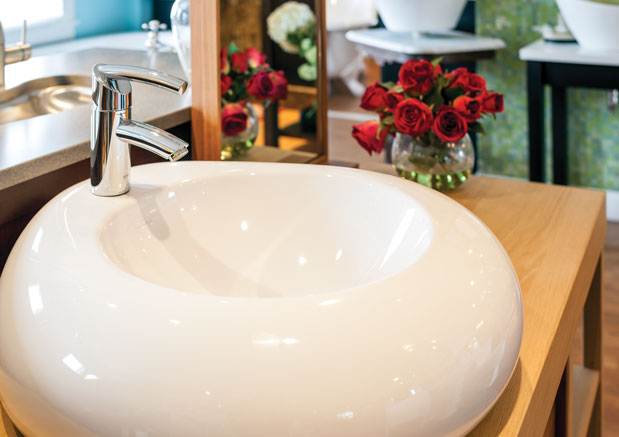 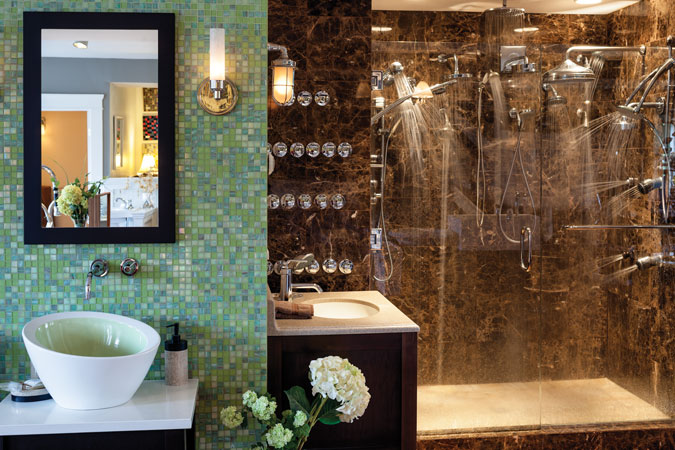 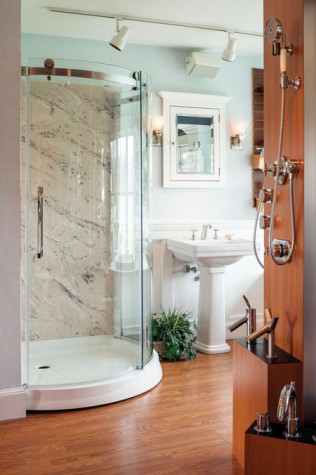 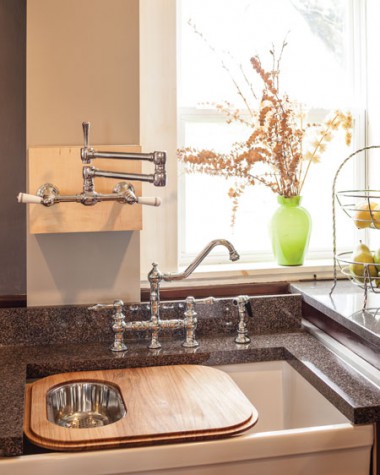 A fire-clay farmhouse sink by Whitehaus pairs nicely with a shapely countermounted faucet from the same company or a modern, wall-mounted model with an articulating arm by Steam Valve Original; the wood cutting board with a built-in colander by Franke comes in sizes that fit a variety of sinks. 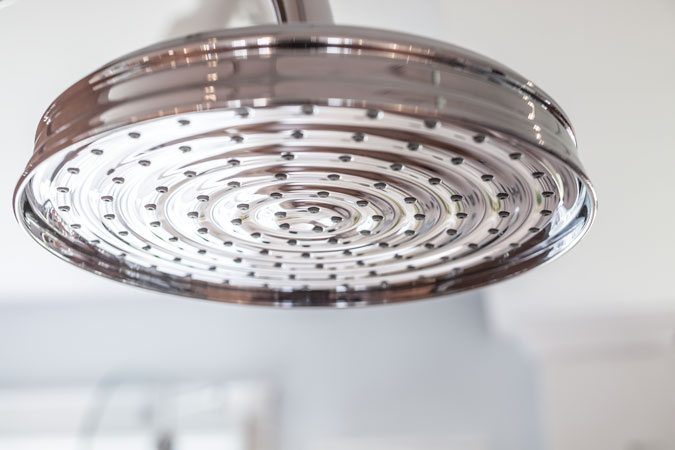 Customers can turn on 22 types of fixtures in a large shower display, including a 10-inch Hansgrohe rain showerhead. 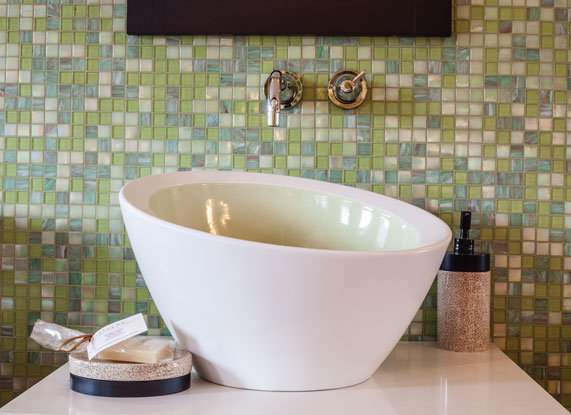 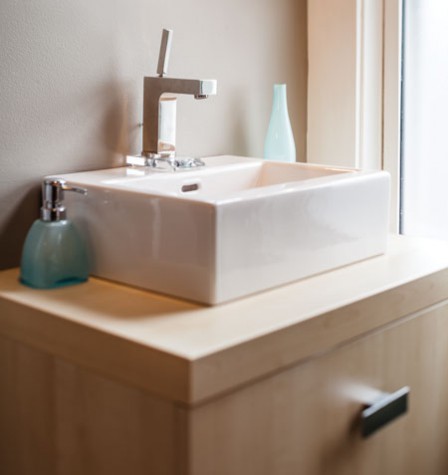 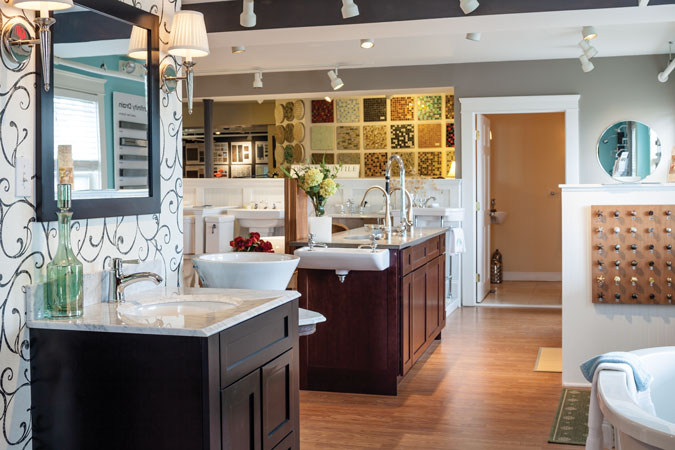 Shaded sconces from Norwell Lighting and Accessories and dark-wood cabinets, including a PrideMaxx painted maple vanity, warm an expanse of ceramic, stone, and metal surfaces 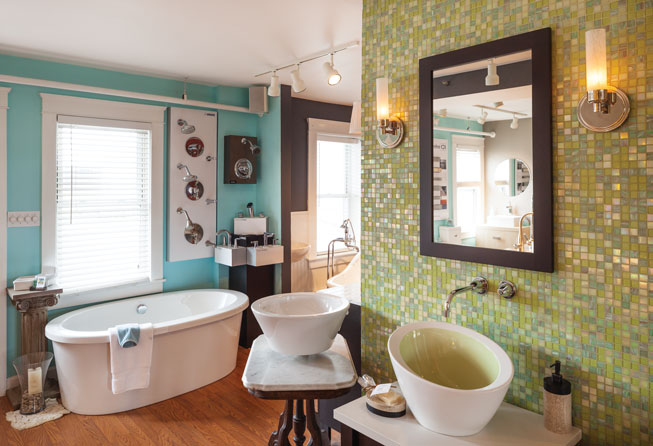 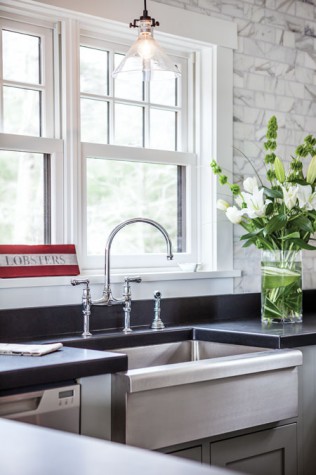 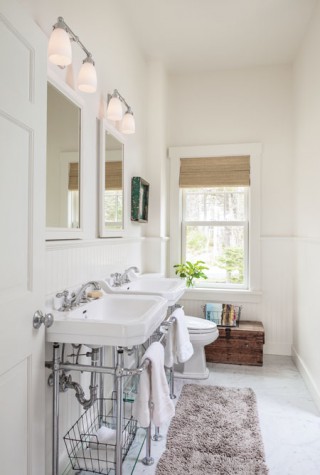 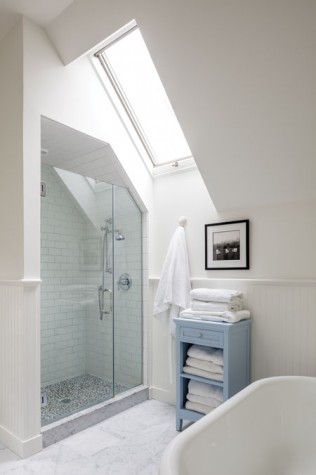 Among the first things you notice are the tubs scattered like island oases inside Fixtures Designer Plumbing Showroom in Rockland. There’s a graceful claw-foot design, a rectangular “air” model that shoots tiny bubbles up from the base, and an elliptical heated soaking bath you could disappear into. Sinks of every conceivable shape are stationed all around: ovular, square, and trapezoidal bowls, a cloud-like dish, and an asymmetrical basin that looks hand-thrown. In a working-shower display, dinner-plate-sized chrome heads and more than a dozen other nozzles unleash a glorious downpour. And then there’s what you might call a king among thrones.

Tucked into the showroom’s bathroom, a combination toilet and bidet known as the Toto Washlet features a heated seat, temperature-controlled water, a drying mechanism, and a remote control. (Tom Brady reportedly has a version of this  “super bowl.”) “It’s amazingly popular,” says Susan MacMillan, the owner responsible for compiling all of these comforts under two roofs: her Rockland location and a second showroom in Portland. “A few years ago, I installed one in the Beauty Mark Spa in Camden and received five orders just from that.”

Bells and whistles aside, it’s easy to find something appealing in the carefully curated collection of bath and kitchen fixtures arranged in little vignettes throughout the store. “I find a wall of faucets to be very overwhelming—I prefer to see things in their actual settings, with some breathing room,” says MacMillan. The presentation allows visitors to fully appreciate, for example, a maple vanity that resembles a piece of living room furniture or the way the flared handles on a faucet mimic the curlicues in the surrounding wallpaper. To make the most of the experience, it’s best to book an appointment. “I offer complimentary in-store design services to all my customers, regardless of budget, and that can take some time,” says MacMillan, who also encourages clients to bring in items such as paint swatches, tile samples, architectural plans, or photos of their existing spaces. “It’s funny because sometimes people are embarrassed to show me their pictures. My response is always, ‘Seriously? You can’t show me anything I haven’t already seen.’”

In the last 20 years, MacMillan and her husband, Andy, a master plumber, have renovated 10 properties, including the 100-year-old white farmhouse that is now the Rockland showroom. Initially, the store was a long-range goal, but after their daughter, Emily, was diagnosed with type 1 diabetes in 2003, MacMillan decided to leave her marketing job for a career that would keep her closer to home. “I’ve always loved design. And with my husband as a resource, and the knowledge I’ve picked up from him over the years, plumbing fixtures seemed like a natural fit,” she says. The couple spent six months gutting the showroom space, which was previously an American Legion hall. “There was a quarter inch of cigarette smoke on the walls, sheet vinyl on the floors—it was bad,” says MacMillan. But they were able to preserve one centerpiece from the old place: a cherry bar and matching built-ins that are now used to showcase kitchen sinks and faucets.

Six years earlier, MacMillan and her husband purchased a graffiti-covered brick warehouse across the street from the ocean in a then-dodgy section of Rockland. They intended to convert the structure into a showroom one day, but their vision changed in an instant. “We were standing inside, looking out a broken window at the Rockland Breakwater Lighthouse, and we had the same thought: this would make a great house,” says MacMillan. The building, once owned by the Standard Oil Company, was essentially an empty shell, but the couple’s first task was to put in a pool. “That was our bribe with the kids,” says MacMillan of Emily and her older sister, Alexandra, who were being displaced from their home in Portland and weren’t exactly thrilled with the new accommodations. The family lived in the revamped four-bedroom, three-bathroom warehouse for seven years before turning it into a rental property.

MacMillan’s hard-won product and design knowledge is a major selling point with her customers. (She once traveled to a manufacturer’s showroom in Atlanta and stood under dozens of showerheads, assessing the sprays.) “She can tell you if two nickel finishes aren’t going to match precisely and the merits of one faucet versus another—she really understands the mechanics,” says Martha Coolidge of Martha Coolidge Design in Camden. In some cases, assisting a client with fixtures leads to something much bigger. Heidi Naughton initially enlisted MacMillan’s help updating two bathrooms in her summer home in Spruce Head, but she ended up hiring her to oversee a whole-house renovation. “She really understood my aesthetic, and we worked well together, so it evolved,” says Naughton. “Ultimately, she was the linchpin—she worked on plans for the kitchen, found the painter, tracked down light fixtures, and basically enabled me to do the whole project from my house in Connecticut.”

“I am careful not to call myself an interior designer, but I feel it’s important to have a firm understanding of the fields that affect my business,” says MacMillan. “And I’m comfortable taking on a larger design role when a client wants me to.” She is equally at ease troubleshooting installation issues with plumbers. “I generally know how all the products work and how to put them together. If I don’t know the answer, I will call Andy.” To assist clients with other aspects of kitchen and bathroom renovation and construction, she has collaborated with Distinctive Tile, which operates adjoining stores in Rockland and Portland. Kitchen Cove Cabinetry and Design is also in the Portland building, and the company often will send a representative to meet with midcoast clients in MacMillan’s Rockland showroom. “The goal was to create design centers where people have access to different experts,” says MacMillan.

A promising new member of the team is Alexandra, MacMillan’s eldest daughter, who has run the Portland showroom since it opened last year and plans to get a master’s degree in interior design. “It’s exciting because it opens the door to maybe having a decorating arm of the company,” says MacMillan, who hopes to see fabrics, wallpaper, and accessories mingling with all that gleaming ceramic and metal sometime in the near future.