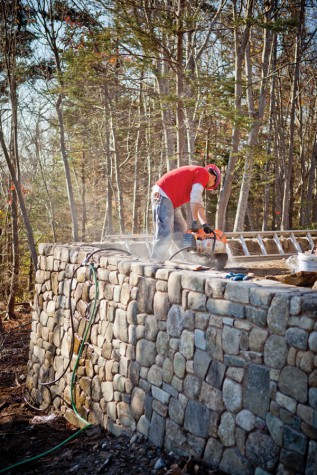 When a worker, pictured with the retaining wall, needs to make a large cut, he employs a diamond saw. 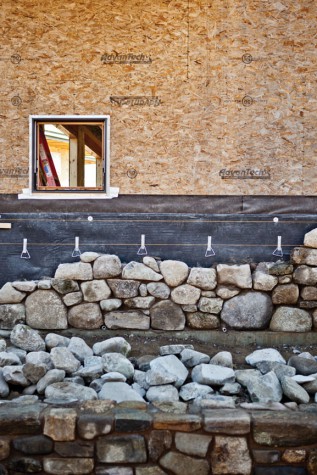 The veneer on the detached garage matches the wall. 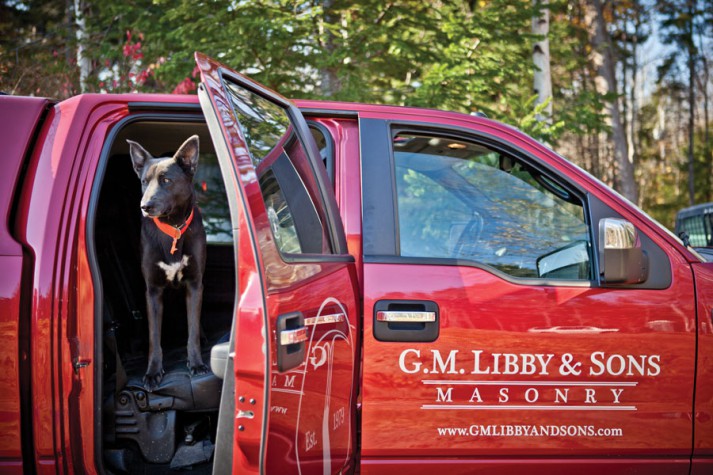 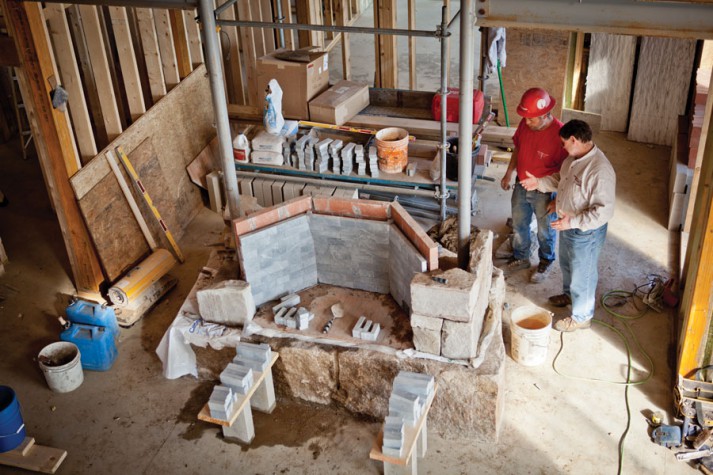 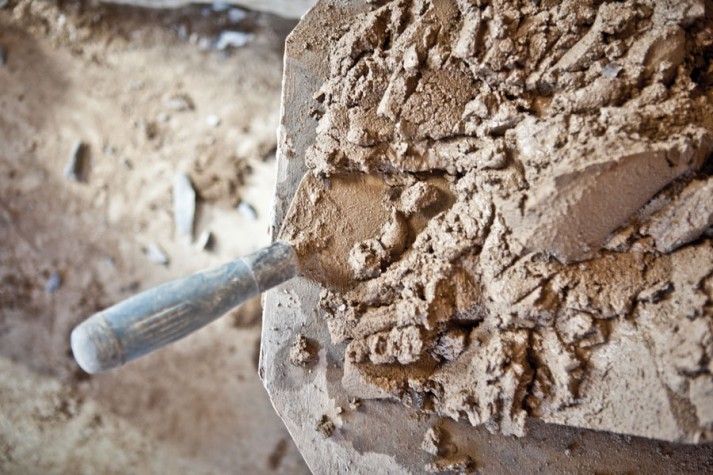 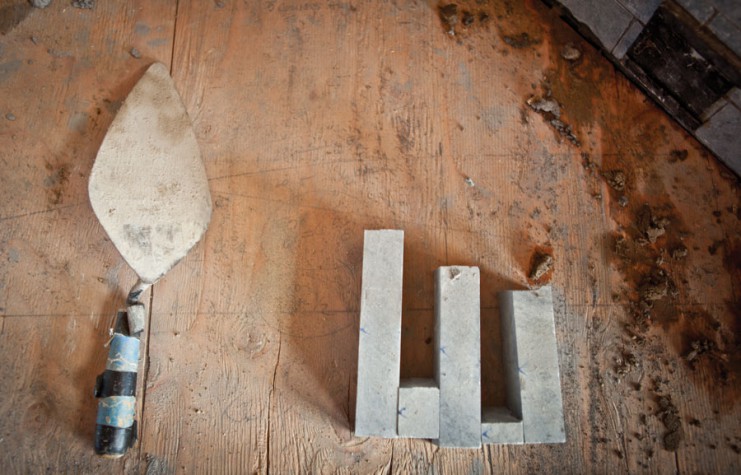 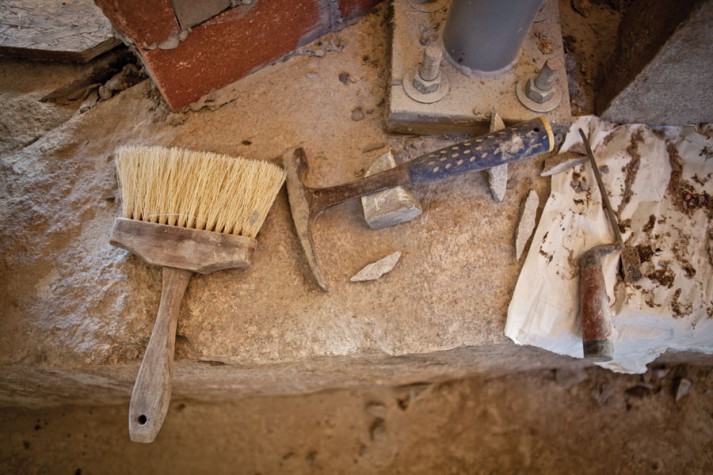 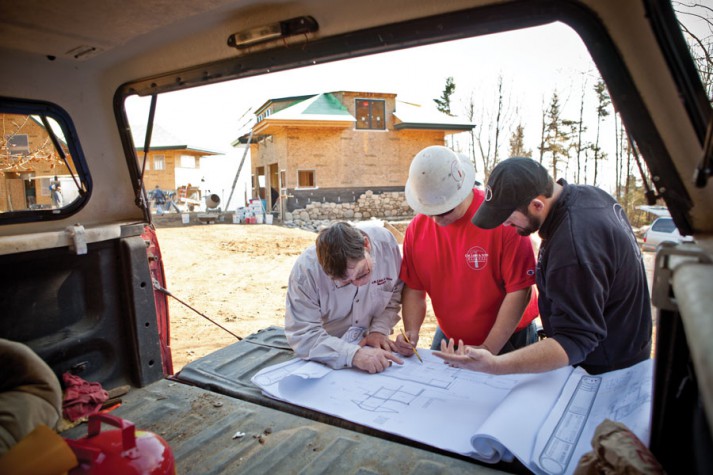 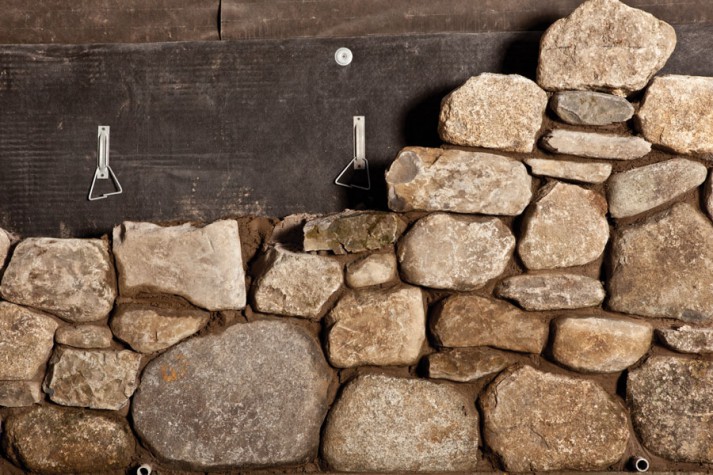 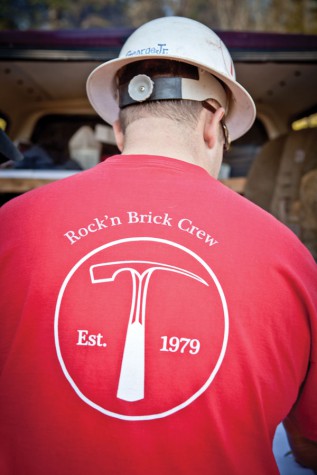 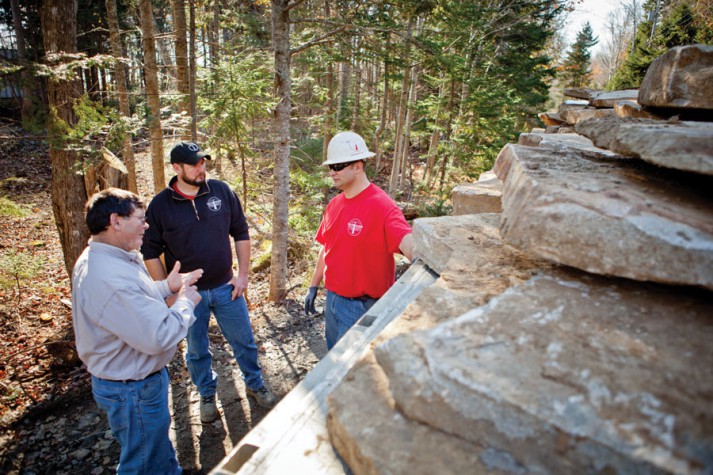 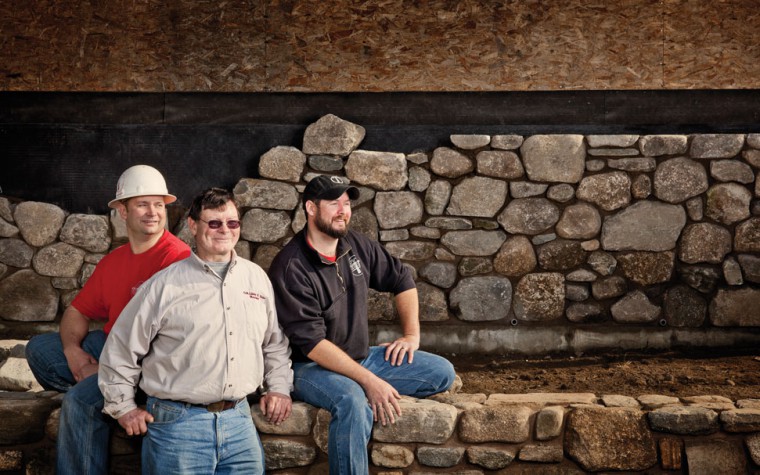 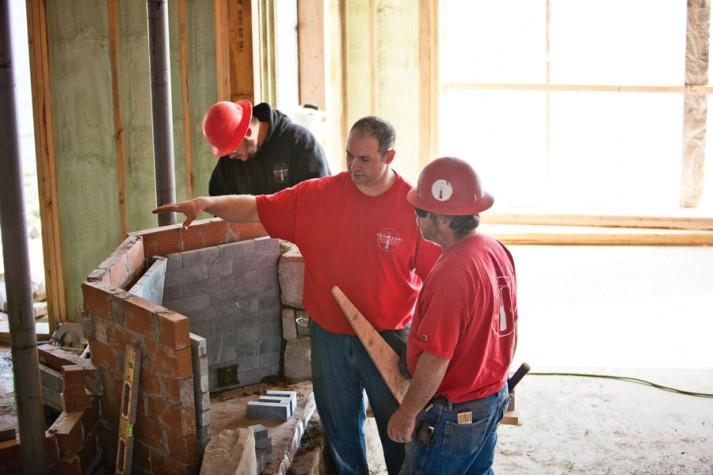 A two-and-a-half story granite fireplace with a soapstone brick interior will define the home’s great room. 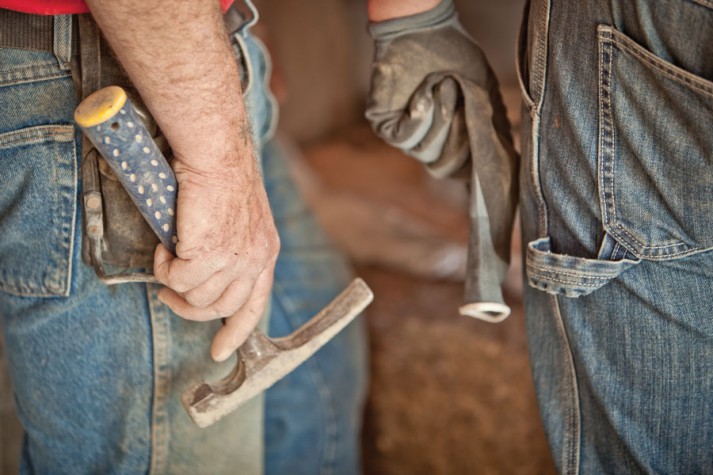 A masonry hammer, which has a chisel on one end, is used to shape the stone. 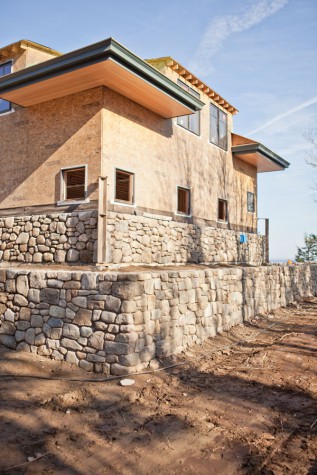 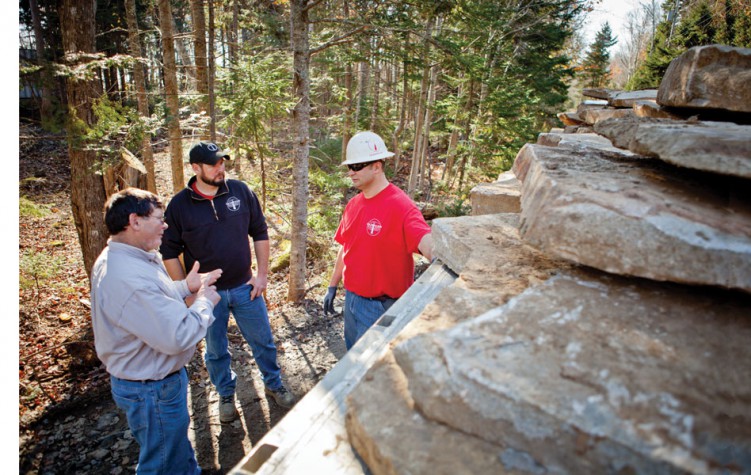 George Libby Sr. has spent his life perfecting the art of residential masonry. Now his sons, George Jr. and Mike, are adding larger-than-life masterpieces to the mix.

It looked like the rock Sisyphus rolled up a hill: a 40,000-pound boulder set into a retaining wall that follows a driveway. The homeowner who commissioned the structure had half-jokingly mentioned to George Libby Jr., co-owner of G.M. Libby and Sons Masonry in North Yarmouth, that she would like something roughly the size of her Mini Cooper to mark a transition between the new wall and an existing one. After measuring the car and making some calls, he located the behemoth in a blueberry field in Palermo. Two weeks later, George Jr. and his younger brother, Mike, also a co-owner of the company, loaded the “Mini Cooper” onto an 18-wheeler and drove it to the job site in Scarborough.

The willingness to move mountains (or insanely heavy boulders) for clients is a Libby trademark. This is the crew that spent four months rebuilding a trio of ornate chimneys, each a harrowing four stories high, on a Tudor-style mansion near Moosehead Lake. Afterward, they erected a massive temporary plywood enclosure so they could lay a 2,500-square-foot ledgestone terrace in the dead of winter. But the Libbys are also the guys you can call to fix your leaky flue or crumbling front steps. “We try to meet a wide range of needs, never losing sight of how we started, helping clients with smaller projects down this road or two towns over,” says George Jr., gesturing out the door of the gray one-room trailer, furnished with a desk and drafting table, that the brothers use as an office. The little house, which overlooks a dirt yard filled with heavy machinery, sits just a few paces from the brothers’ childhood home, the place where their father, George Sr., started the company in
1979 and where he still lives today.

George Sr. purchased the property after graduating from high school because, he says, “I had to have a place to go parking.” After earning a degree in building construction from what is now Southern Maine Community College, he built a house on the plot and started a family. He worked as a project manager for a couple of commercial construction companies before striking out on his own. “Initially, I would do anything,” he says. “I’d fix your walkway, redo the tile in your bathroom—I’d cook your breakfast if you wanted me to.” A couple of years in, “I realized there was less competition in masonry work and I could make more money. And I enjoyed it more. I remember being on Cousins Island [in Yarmouth]. I could smell the ocean every day that I went to work. I was on my knees, so I got my prayers out of the way, and I built a nice stone wall. I thought, This is what I should do.”

He had enough know-how “to get out the door,” and the rest was learned on the job. “Dad has a natural ability to visualize how something is made and follow it through to a physical object,” says George Jr. “If you understand some core mechanics, you can apply them to brick, stone, or another medium.” Not surprisingly, that skill rubbed off on the brothers, each of whom began accompanying their father on jobs when they were about 10 years old. “Dad’s always made it a lot of fun,” says George Jr. “And when you’re a little boy, saws are cool, jackhammers are cool, riding in Dad’s work truck is cool—it caters to some of those primal instincts.”

In 1995, Mike and George Jr. decided they wanted in. “We always worked for Dad in the summer and we enjoyed it, so we just continued,” says Mike. “He never forced us—he always said, ‘if you want to do something else, go for it.’” George Sr. instituted a 15-year plan: the brothers would become expert mechanics and then gradually transition into managerial roles. “We didn’t have any idea what the 15-year plan was until just now,” says George Jr. “They were having so much fun they didn’t realize they were moving through the process,” counters George Sr.

Since the brothers joined the company, the size of the operation has more than doubled to 15 full-time workers—an impressive number in the residential-masonry market. “Most masons we’ve dealt with are one guy and a few laborers,” says Steve Berger, construction manager for Knickerbocker Group in Boothbay, who is working with the Libbys on the Moosehead Lake project. For big jobs, “those guys can subcontract, but the Libbys come with the manpower from the start.” Which means excellent quality control and the ability to meet tight deadlines.

The company’s capacity, combined with a willingness to travel to far-flung job sites and a cooperative approach, has made the Libbys the go-to masons for some of the most respected builders and architects in the state. “It is unique in my experience to have somebody who is so receptive to what you want to achieve in the design,” says John Morris of John Morris Architects in Camden, who collaborated with George Jr. on the Muscongus Bay home shown on these pages. “George Libby Jr. [who holds a degree from Maine College of Art] gets the art part of it right and complements the process with his ideas and experience.”

Mike and George Jr. spend most of their days on the road responding to bids and checking on projects. “We make it a point to hit every job at least two or three times a week,” says George Jr. When things get hectic, “it’s kind of a yin and yang: where I fall short Mike picks up and vice versa.” George Sr., who now serves as an advisor, provides the third line of defense. “One of the virtues of us working together is it makes our family lives so much better,” he says. “The boys can run home to take care of a sick kid, I’ll take my grandkids to swimming lessons if they need—we make it happen.” And when they tire of talking to each other? “We say, ‘my cell phone battery is dying’—that’s pretty much the extent of it,” says George Jr.

As for the business, the goal is to “keep expanding our comfort zone,” says George Jr. After all, the next client may own a Suburban and want a monolith to match.