Maker in the Middle 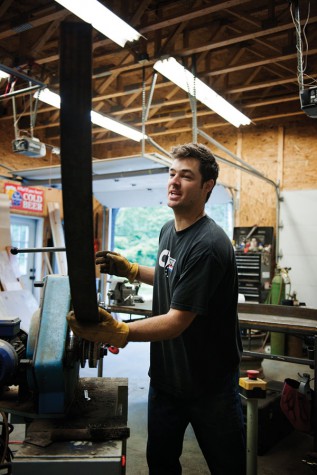 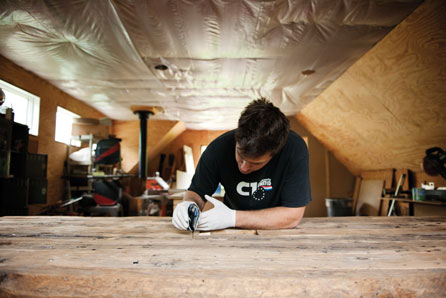 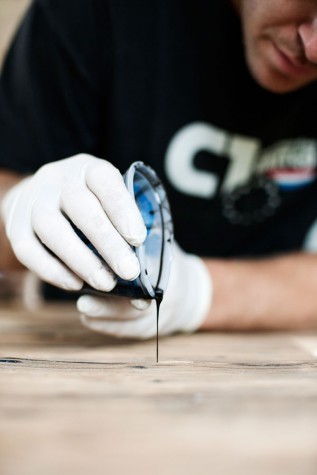 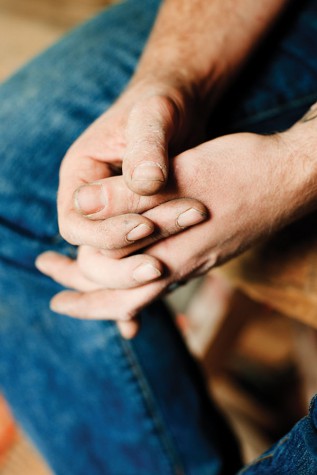 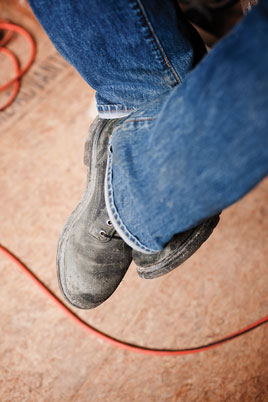 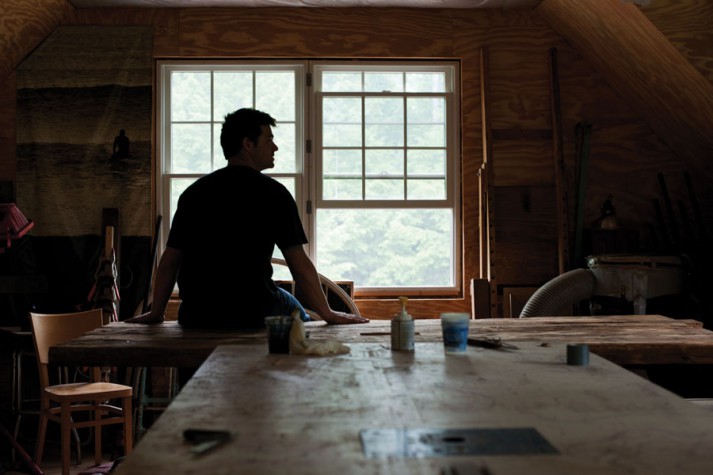 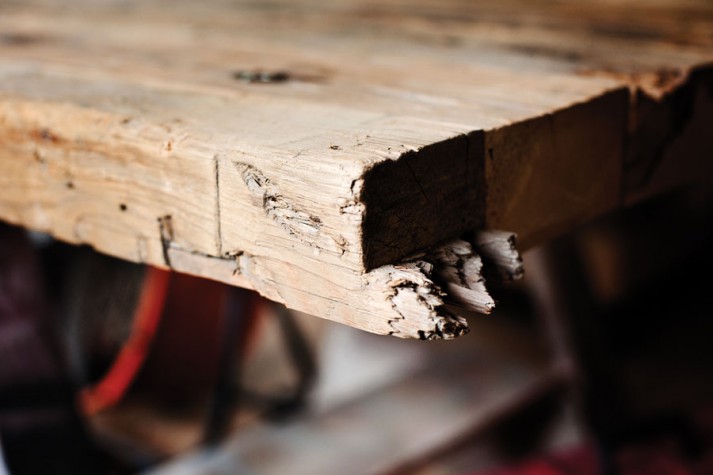 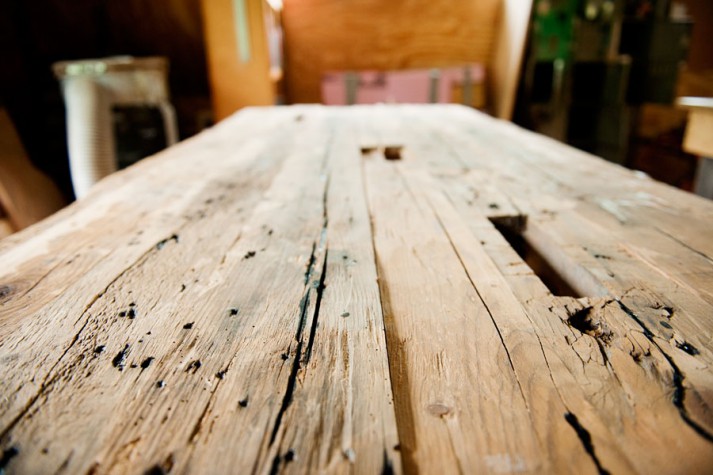 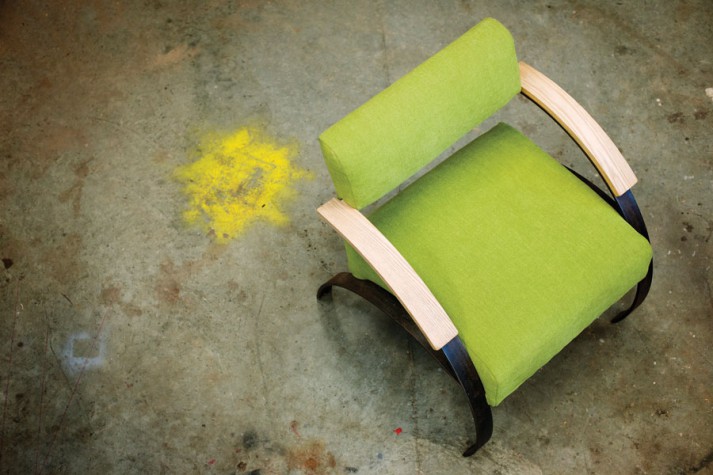 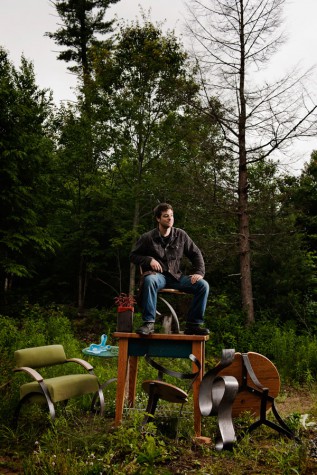 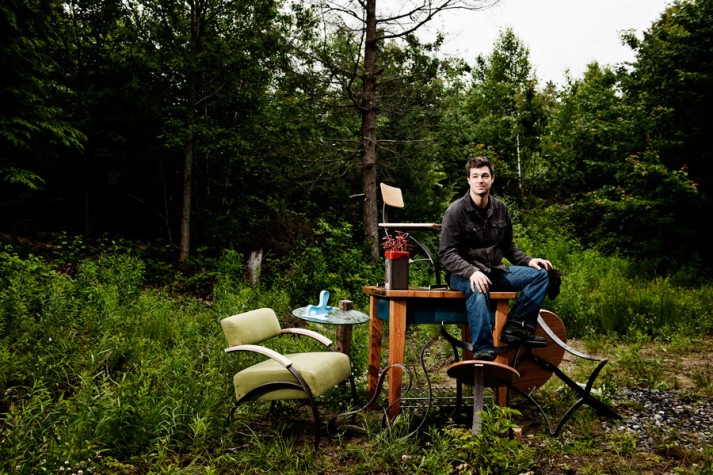 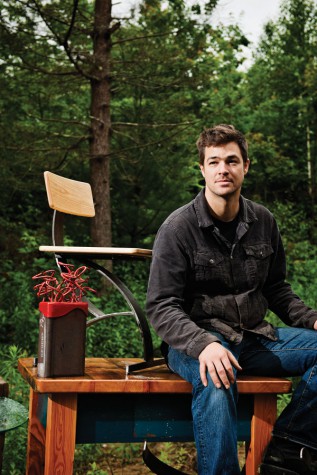 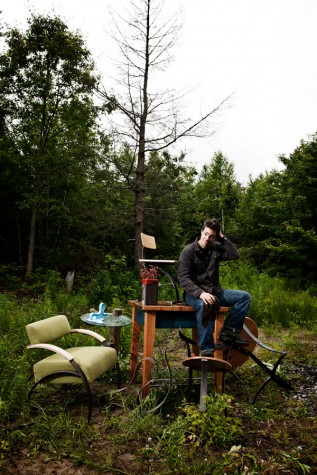 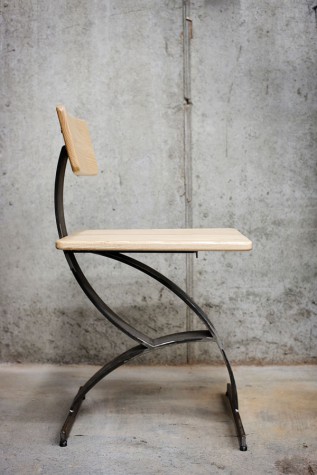 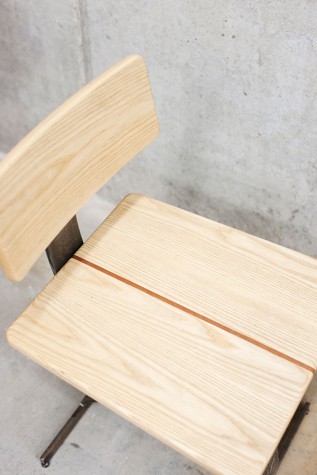 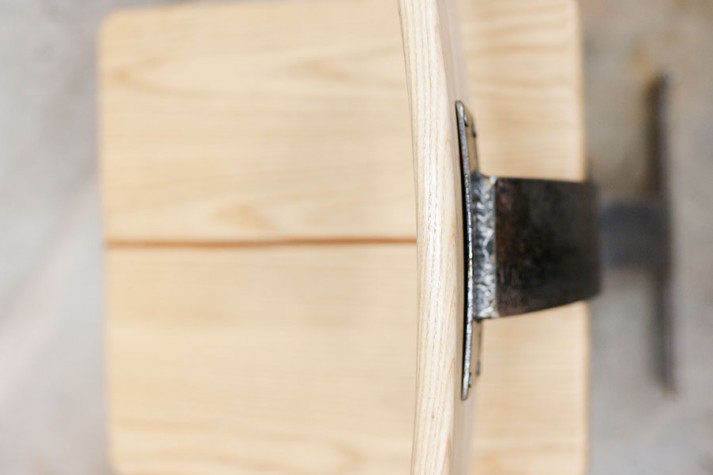 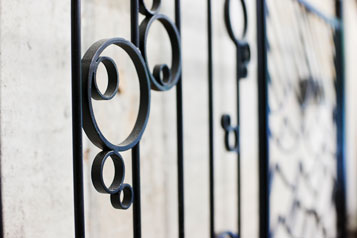 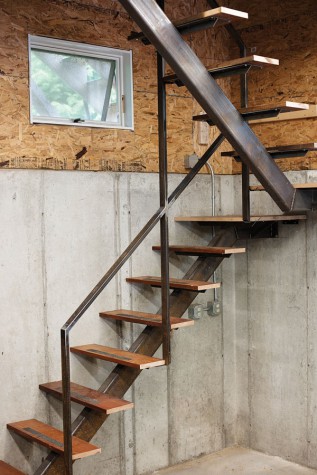 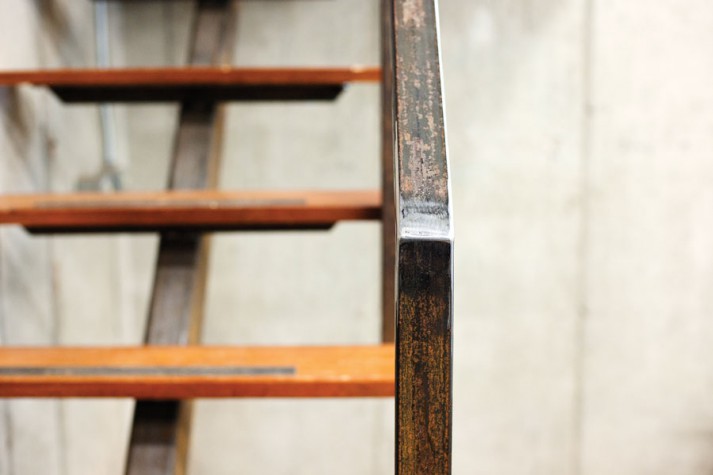 Nate Deyesso gets back to his art

Tonight, you could say Nate Deyesso is wearing his artist hat.
If you were being literal, though, you would say he’s wearing his welding clothes—a heavy cowhide cape and bib connected by a row of snaps at his chest. He stops in briefly to get his photo taken at a party. With a handsome, tight-lipped smile he nails it, and is out the door and on to the next event, an exhibition of his own at Corduroy Boutique and Gallery on Market Street in Portland. There, behind his leather armor, he will demonstrate the art of cold bending, hammering, and welding, surrounded by his artwork.

The thirty-three-year-old started DSO Creative Fabrication, a custom furniture and fabrication company based in Scarborough, six years ago. “DSO is the phonetic pronunciation of my last name,” he explains, his face revealing a smile, “and what my mom used to write on my underwear when I went to summer camp.” It’s one of those names that could encompass anything. So when we sit down to talk one afternoon in October, I ask Deyesso what he does. There’s a deep breath and a pause. “Do you want the short answer or the long answer?”

The short answer is that Deyesso wears many professional hats—artist, designer, craftsman, fabricator, and furniture maker. Personally, he would add surfer and proud father to that list as well. The long answer is that Deyesso hovers between two worlds: the art world, where he can express himself without giving thought to functionality, and the business world where, in his line of work, function reigns supreme. “There are two sides of me: the practical side that wants to build a piece to fit into a predestined place, and the other side of me that sometimes wants to just blow it all out of proportion and make something that is just for the aesthetic and emotional experience.”

Unlike some talented people who do one thing and do it very well, Deyesso is making his mark in both worlds. This last year, in particular, was a big one for him. Over the summer, he received an Entreverge award from Propel, the young professionals’ organization affiliated with the Portland Regional Chamber of Commerce that recognizes innovative young entrepreneurs. He also had his first solo art show in recent years and won his first public art commission. Work keeps coming in from clients asking for custom tables and chairs, and from designers who are seeking out Deyesso to help them with their projects—a handrail here, a restaurant bar there.

But more and more these days, Deyesso finds himself cheating on function with art.

It’s not a new love of his. Originally from Norwell on Boston’s South Shore, he was “big into art” at Gould Academy in Maine, where he went to boarding school. Although his teachers told him he was talented, he didn’t think his artistic interests could become a career path. “I never thought it was something I’d be able to support a family with. I worried about pigeonholing myself, getting stuck inside some kind of vacuum.” Deyesso went to college at the University of Vermont, first studying marine resources before finding his way back to art and painting. After he graduated, he worked in San Diego for six months and then returned to the Northeast and settled in Maine, where he had vacationed with his family as a kid. “I have always needed to be near a coastline; that’s just something that has to happen.”

In Portland, Deyesso started painting commissioned portraits, but found his inspiration had run dry. “It was hard to make art in my twenties because I didn’t have anything to really drive or inspire it. I was happy. I was not a depressed, brooding artist. When I was younger, it was easier for me—all that teenage angst and romance. As I got older, I didn’t know what to paint anymore.”

Working in Portland, Deyesso got introduced to craftsmen and artists such as woodworker Duane Patricio and sculptor Patrick Plourde, and he started doing work for them. “I really thought those guys were into something cool. I met a lot of people, sort of got into the scene, and started getting commissions. Portland was a great place to start because it is just this big hub.”

Deyesso was transfixed by the reclaimed wood his mentors were working with, but he had limited patience for traditional woodworking techniques. “I was never really into the fine cabinetry and all that real hardcore craftsman stuff that I saw. To me, it was just hours and hours of painstaking work on a notch or a mortise-and-tenon, when you could just use a screw or nail in it, get it done in half the time, and move on to the next project.” Instead, Deyesso chose to hone his talents and push the limits of metal and wood by experimenting with form and fluidity. To Deyesso, building custom furniture and fixtures is a way to satisfy his artistic craving while also producing work that is both useful and beautiful. “Custom furniture pieces are so great because they have an immediate home. They have a purpose, a function,” he says.

Lately though, Deyesso has been working hard to balance his custom-fabrication business with his artistic pursuits. “I’m really trying to reestablish myself as an artist. I’m still getting comfortable with that title. I get the recognition now as the furniture guy, but I want to swing the pendulum back and really get back into what I started out as.” As much as Deyesso may try to compartmentalize art and fabrication, he recognizes that he can’t pursue one without the other. “There is a coexistence of those two things. They help perpetuate one another. But still, it might take a while for the people who are talking about the ‘furniture me’ to start talking about the ‘art me.’”

The show at Corduroy was a significant check in Deyesso’s “art me” column. “It’s a new body of work about exploring organic forms through metal—new growth from old metal, old steel.” Deyesso views the colorful molds as a metaphor for new ideas and new life emerging from old chunks of rusty steel. “It’s definitely the best body of work I’ve ever done. I could never have done this with my paintings—they just weren’t cohesive enough.”

Deyesso has been exploring other ways to get his art in front of people as well. Inspired by artists like John Bisbee and Aaron Stephan, he has been applying for public-art commissions. Recently, he received a commission for a boardwalk rejuvenation project in New Hampshire—400 feet of stainless-steel inlays in a sidewalk. “I love the fact that it is a permanent piece. It’s going to be there for as long as there is that sidewalk.”

Deyesso may be balancing the artist inside him with the designer, but he doesn’t think of it as a dilemma or a decision he has to make. In fact, it comes with the territory when one lives and works in Maine, he says. “I don’t think you can get by here without being creative. I don’t mean that everyone here is artistic—what I mean is that people here have a hundred jobs. They’re resourceful. They are always expanding their horizons in some form or another. Nobody I know does just one thing.”