The Many Sides of York 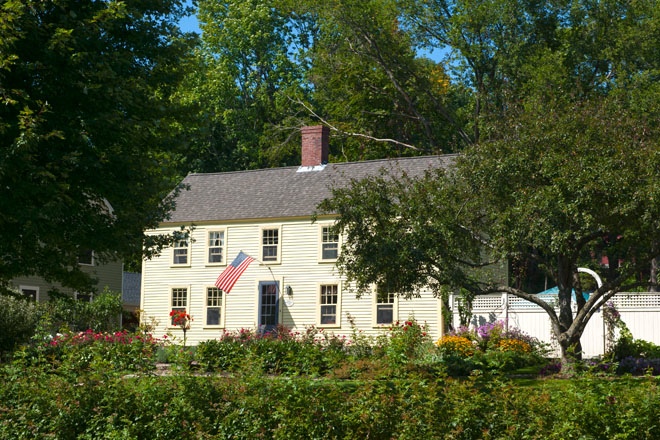 Surrounded by mature growth and colorful flowers, this is the kind of classic historical home you’ll find in York. 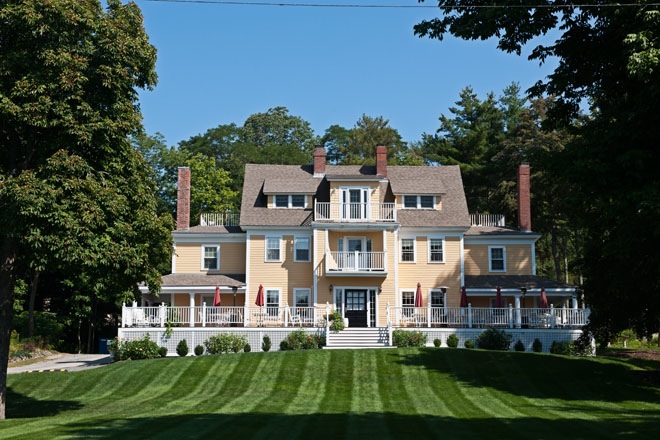 Beautifully maintained and elegantly manicured, the Chapman Cottage and Tavern is part of the York Harbor Inn family of inns. 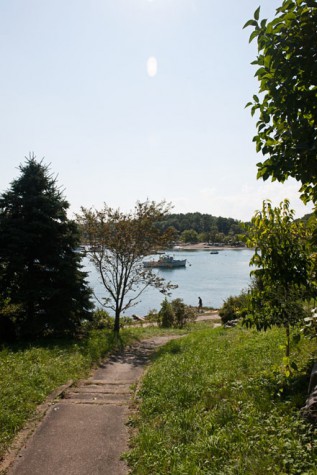 Stop by the Museums of Old York to learn about the history of York Village and to get information about the numerous walking paths along the water. 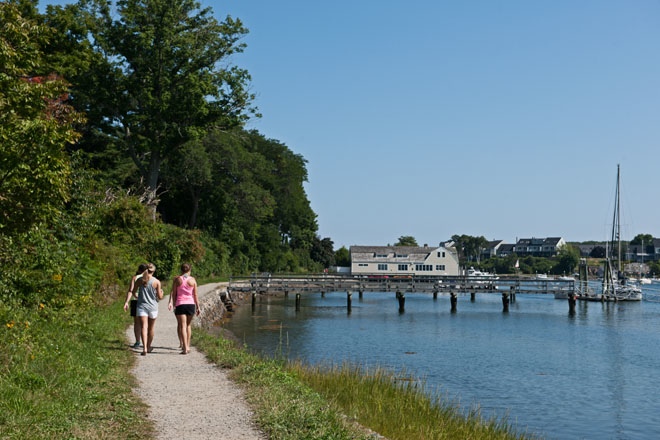 A foursome enjoys a summer walk along the water’s edge. 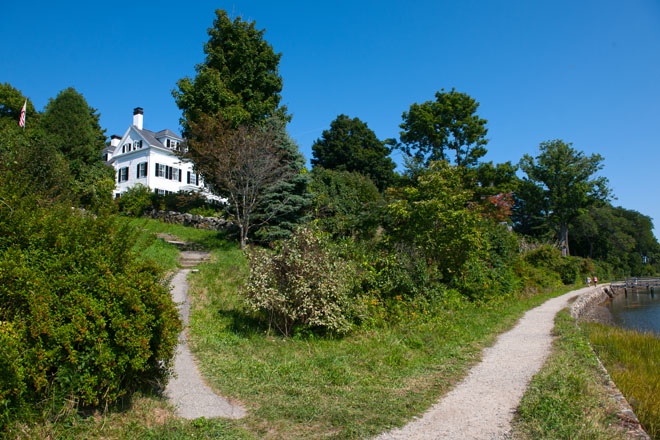 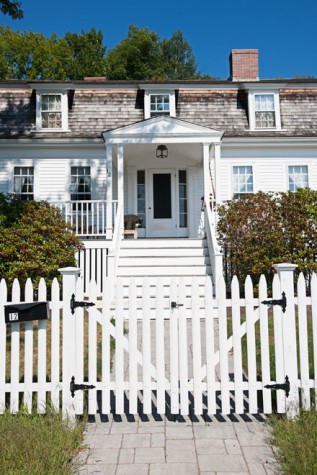 It doesn’t get more New England than an old home surrounded by a white picket fence. 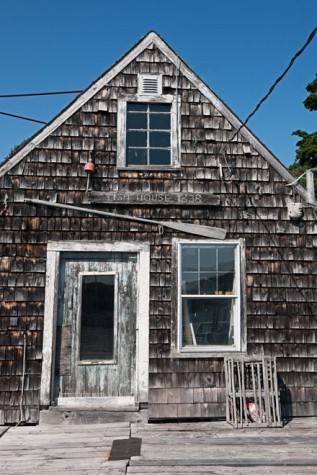 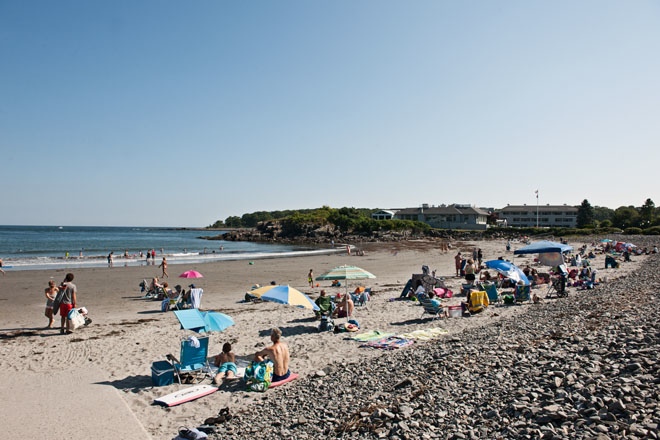 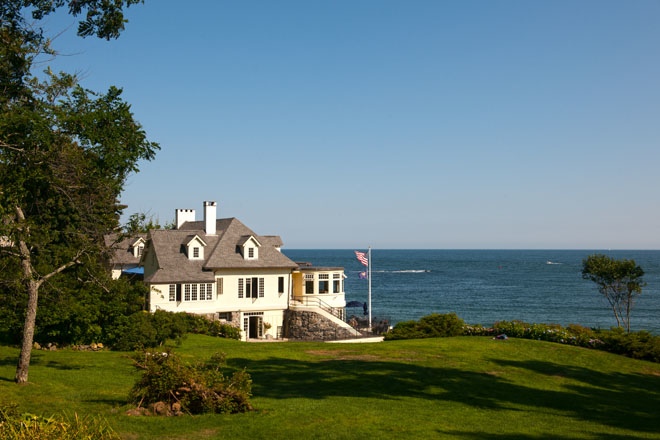 One of many grand homes lining the ocean’s edge in York Harbor. 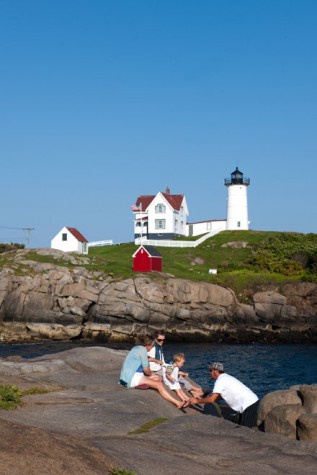 A family playing in the foreground of the Nubble Light, also known as the Cape Neddick Lighthouse. 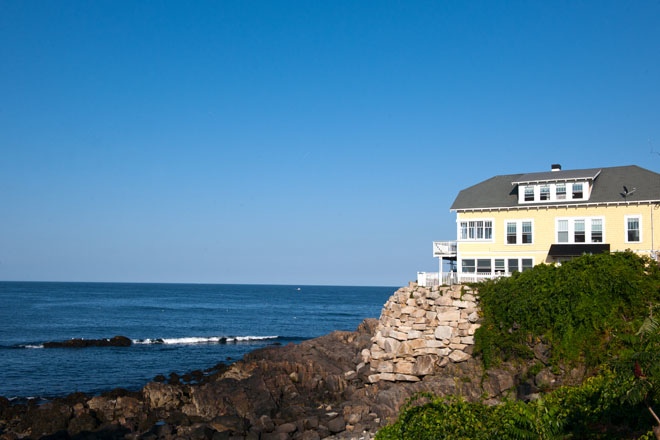 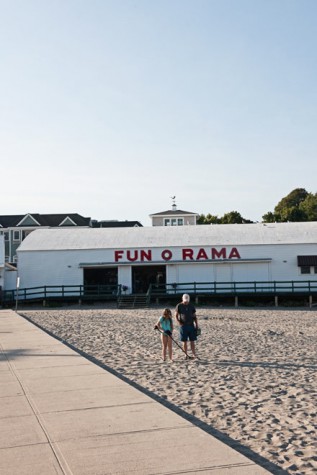 The Fun-O-Rama on Short Sands is a great vintage arcade beside a bowling alley and among numerous shops and restaurants.

The other day my best friend called me to say she needed to get out of Boston. “Let’s meet in York,” she said, because she loves this seaside town, and because there can be something so rejuvenating about crossing the Piscataqua River Bridge into Maine, even if just for an afternoon. My response: “Which York?” We have this conversation often enough that she comprehended my question on both a practical level (there are actually four postal codes in York) and an emotional one: between York Village, York Harbor, York Beach, and Cape Neddick, this town contains a version of New England to satisfy almost any mood. In the end, we decided to spend a little time in all four.

We begin our day in York Village. Any story about York ought to begin here. One of the oldest English settlements in the country, the village is filled with vestiges of Colonial New England—from the “Old Gaol” founded in 1719 to the cemeteries filled with crumbling headstones to the centuries-old colonials along Lindsay Road. Many of these historical buildings and homes have been preserved and can be visited thanks to Museums of Old York. While not quite so ancient, today’s main drag along York Street has a throwback feel as well. Galleries, hip gift shops, bike shops, restaurants, and cafes fill hunched brick buildings loaded with original details and charm. The sidewalks are well trodden, as are the walking paths leading to the small local hospital where—rumor has it—patients are sometimes served lobster rolls. Set back from the bay, near the river, the homes are generally quaint. In the summer, gardens bubble over picket fences, mammoth trees shade grassy lawns, and old stone walls cut meaninglessly through neighbors’ yards. Closer to the water, bridges span the gaps from one strand of river to the next, and boats bob in these smooth patches of water, protected from the open ocean.

Northeast of York Village, where the York River runs into the Atlantic, the mood changes. In the eighteenth century, this area was riddled with protective forts and crude fish processing facilities, but into the nineteenth and twentieth centuries, this curve of land became prime real estate for its exceptional water views. In York Harbor, the homes grow larger, grander. Many of these shingle-style homes were built as summer cottages through the nineteenth and twentieth centuries. Dominating one side of the road are the historic properties of the York Harbor Inn. Across the street from the Inn’s main building is a public park. From this special vantage point, the sea blends seamlessly into sky, in a way that is rare in Maine and unique to southern Maine.

York Harbor–based architect William Ross of William Ross Design is particularly fond of York Harbor’s lesser-known Harbor Beach, tucked alongside a rocky stretch of shore. “Standing on Harbor Beach in York Harbor, the view to the Northeast never ceases to impress me,” Ross tells us. “That view of the coast, with its grand old homes overlooking the Cliff Walk and the Atlantic Ocean beyond, is the same picturesque view today as it was in 1910.” His architectural design work takes its inspiration from that time period. One hundred years later, the appeal of the classic shingle- style home has not waned, and 90 percent of Ross’s work is new construction on oceanfront property in York, Kittery, Ogunquit, and the surrounding area.

North along Route 1A, shingle-style homes are replaced by expansive RV parks and bleach-white motels with vintage signs—hints that you’re nearing the largest of York’s sandy beaches, known as Long Sands Beach. All summer long you can count on this stretch of road to be busy. Cars cruise slowly looking for parking. People in cover-ups dash from the ice cream shops and tiki bars back to the beach, or in the opposite direction down the dinky side streets that lead to beach cottages. It is possible to cut straight to Long Sand Beach’s counterpart, Short Sands, but my friend and I always take the detour around Cape Neddick to catch a glimpse of ridiculously picturesque Nubble Light. The hilly cape is stacked with homes built close together looking out over the ocean.

Tucked into the northern crux of Cape Neddick is the second of York’s carnivalesque beaches. Probably even more family friendly than Long Sands, Short Sands sunbathers share the beach with a bowling alley and breezy, old buildings housing arcade games. There are T-shirt shops, palm readers, and salt-water taffy and specialty popcorn shops. There is even a zoo. Beyond Short Sands, kitsch is replaced by quaint. The village of Cape Neddick, while less condensed than York Village and less saturated with living history, has a similar feel. Old farms dot the roadways. The mood is sober. The berry pie at Pie in the Sky Bakery is excellent.

My friend and I end our afternoon visit to York where it began—in the Village. Giddy on Short Sands beach treats, with sun on our faces and sand between our toes, we walk down Lindsay Road, down to the mouth of the York River where people have been fishing for centuries, and where the docks are still piled high with traps. The river is calm. The afternoon is verging on evening, but we don’t want to leave just yet. We take a seat in the grass, enjoying this quiet bit of York for a little while longer.