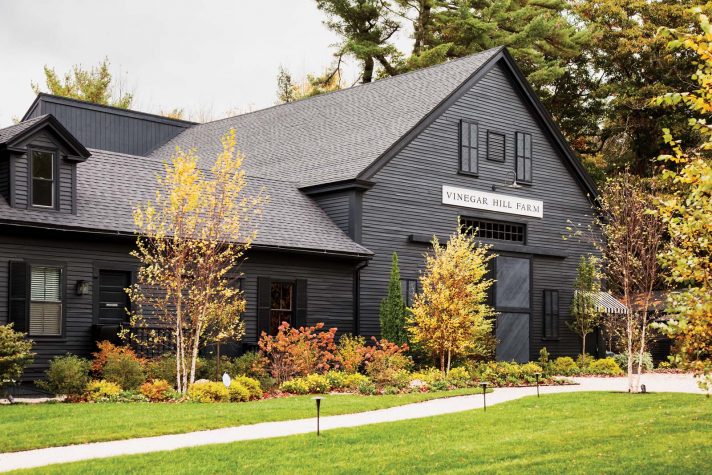 The barn that houses Vinegar Hill Music Theatre in Arundel has been used for performances since 1997. New owners Tim Harrington and Deb Lennon have revived the barn and adjacent buildings with dramatic black paint and bright plantings by Ted Carter Inspired Landscapes of Buxton. 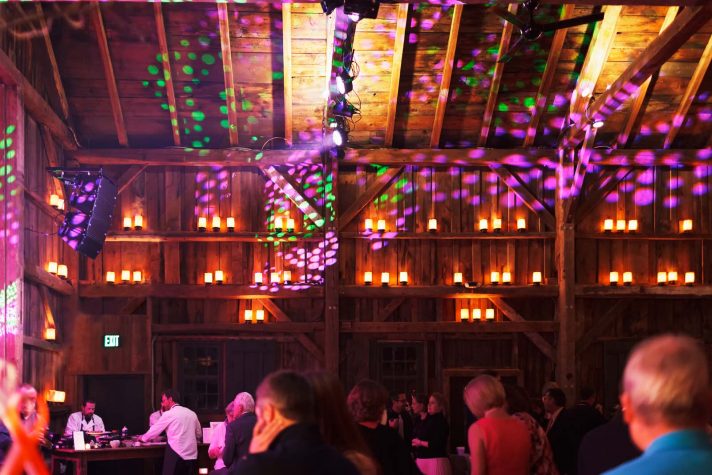 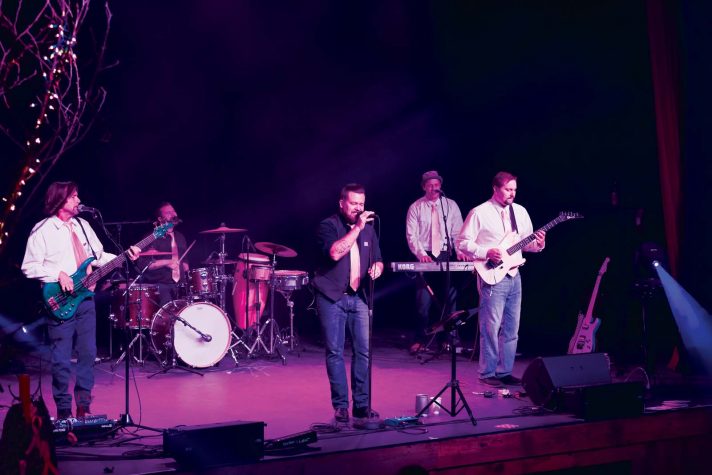 The band Tickle performs at 2016’s A Pink Tie Party, a benefit for breast cancer research. 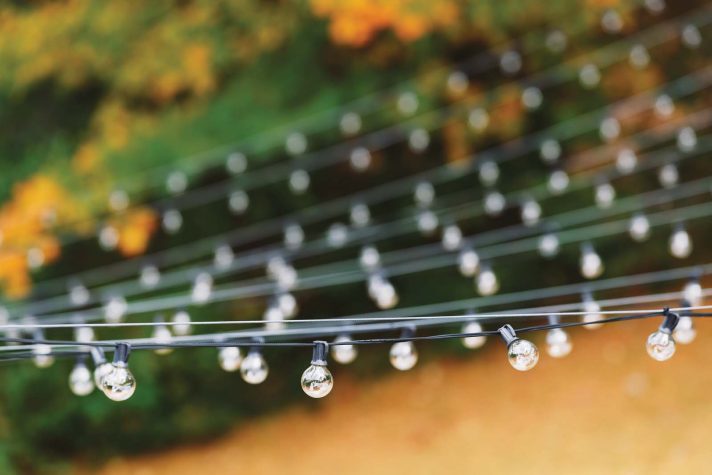 Strings of globe lights form a canopy over the garden at Vinegar Hill, where patrons gather for drinks before shows. 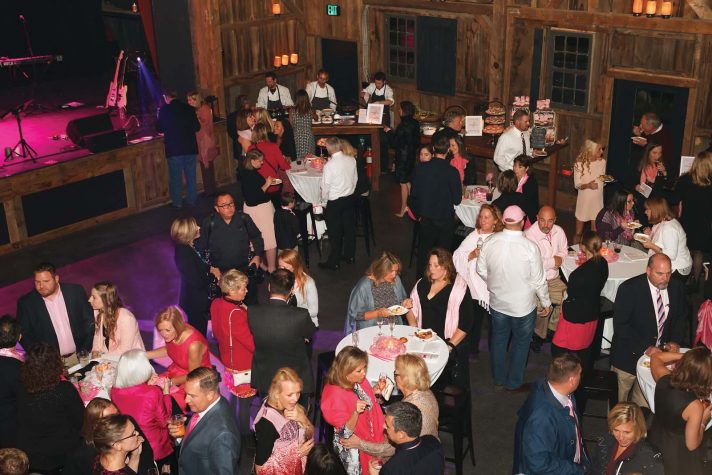 The full house at A Pink Tie Party.

Repurposing old things for new uses is a New England tradition. When Adrienne Grant opened the Arundel Barn Playhouse in 1997, she resurrected a 100-year-old barn and farmhouse that had been vacant since its last occupants died more than a decade earlier. Grant retired in 2016, and the barn on the corner of Old Post and River Roads was again reinvented as the Vinegar Hill Music Theatre, this time with a stylish update. Gone are the playhouse’s farm signs and country-style decor, replaced by sophisticated design elements that modernize the property while still respecting its history.

Vinegar Hill is owned by Tim Harrington, founding partner of the Kennebunkport Resort Collection (KRC), and Deb Lennon, also a founding partner of KRC, who left the company in 2015 and now serves as the venue’s managing partner. “I had traveled down to the Bull Run Restaurant in Shirley, Massachusetts, to see Rickie Lee Jones a few summers ago, and came back saying that we had to have something like that in the Kennebunks,” says Harrington. “Tim had always admired the Arundel Barn Playhouse,” adds Lennon. “He saw it as having tremendous bones—a beautiful old barn, great acreage, and huge potential.”

As creative director for the hotel group, Harrington is responsible for the elegant yet laid-back vibe that distinguishes each of its eight properties, and he has brought the same sensibility to Vinegar Hill. Once painted pale yellow, the exterior of the building is now slate black, a dramatic choice that stands out against its rural surroundings. A simple white sign over the barn doors reads “Vinegar Hill Farm”—referring to an Arundel legend about one year when all the apple cider went bad and local farmers dumped it in a single spot, giving it the name Vinegar Hill. In the driveway, parking lot, and walkways, gravel has been replaced by crushed shells, a nod to the nearby coastline and a bright visual contrast to the dark buildings. Lattice fencing painted the same black screens an outdoor space for drinks, which is festooned with strings of globe lights. Inside the theater, the old, bolted-to-the-floor seating was replaced with 210 moveable seats (plus 30 in the balcony boxes). Farm implements that had hung on the walls were taken down, and air-conditioning was installed. “I was thrilled to embrace the history and gorgeous architecture of the barn,” says Harrington. “We were able to layer on more modern amenities while preserving its authenticity, warmth, and intimacy.”

The barn itself had been well cared for by Grant, Lennon says, but to reopen the theater as a state-of-the-art music venue required all-new sound and lighting systems. Bathrooms and an elegant stone-topped bar were added near the entrance, and the connecting farmhouse was completely gutted to create a comfortably furnished “green room” with a dining area and a kitchen where entertainers can relax before and after shows. “All the performers have loved it; in fact, they all want to come back,” says Lennon.

As a performance space, the barn is spare and dramatic, with nothing ornamenting the rough-hewn posts and beams except for rows of pillar candles, which are hardwired. “The history and feeling was in the wood and the structure, and
we really wanted that to speak for itself,” says designer Krista Stokes, who worked with Harrington on the project. “We thought using ‘candlelight’ would keep it intimate, indulgent, and warm.”

Stokes says that honoring the barn’s place in the community also factored into the design. Once part of a farm built in the late nineteenth century by the William E. Smith family, and last inhabited by his descendants Marcia and Angelia Smith, known to neighbors as “the Smith sisters,” the property is a local icon. “People are really sentimental about it,” she says. To imbue the renovated space with a sense of the past, Stokes commissioned artist David Allen—who also did 100 original paintings for the KRC’s Lodge on the Cove— to create portraits of imaginary “ancestors” for the theater’s restrooms. The moody paintings depict a man (in the men’s room) and a woman (in the ladies’ room) dressed in simple, early-nineteenth-century clothing and viewed from the back, which gives them a sense of mystery and privacy. “We were going to do a portrait of the Smith sisters, but we couldn’t find an accurate picture of them anywhere,” Stokes says. “We didn’t want to imagine them, because they were actual people and that seemed disrespectful.”

Landscape designer Ted Carter of Ted Carter Inspired Landscapes, who has worked with Harrington on other KRC properties, explains that painting all of Vinegar Hill’s structures black helped to diminish their size. “It’s like wearing black clothes,” he says. “Working with a black background in a green landscape affords creative choices,” he continues, “but it’s also challenging, because black swallows color.” To make his plantings pop, Carter chose a palette of yellow, chartreuse, and white. For trees and shrubs, he planted Heritage birch, which has white exfoliating bark; Taylor’s Sunburst pine,with needles that emerge bright yellow; and Golden Mop threadleaf false cypress, a shaggy dwarf shrub. White daylilies, hydrangeas, and lilacs add softness while echoing what might have been planted on the old farm. “There was minimal landscaping in those days, because they spent so much time in survival mode; landscaping was a luxury,” says Carter. “My planting scheme—although it is certainly off the chartsfor that era—is still a remarkably simple, uncomplicated installation.”

Carter’s plantings should be at their peak when Vinegar Hill opens for its second season on June 17 with a performance by the Four C Notes—a Frankie Valli tribute group. Linda Eder, Ronan Tynan, and Well-Strung are all returning for the 2017 season, along with Larry Gatlin and Jim Messina, who will both appear on the Vinegar Hill stage for the first time. “We strive to have a pretty diverse group of performers that range from nostalgia to Broadway to blues to country western to disco and then some of the tributes, so that it has a wide appeal,” says Lennon. “We’re hoping to have (TV host and musician) Joe Scarborough back again, because he was one of the highlights of last summer.”

Lennon’s future plans for Vinegar Hill include a youth theater program. She will also be hosting more nonprofit events, such as the Pink Tie Party, which supports cancer research, and the Celebration of Reading, which benefits the Barbara Bush Foundation for Family Literacy. Her first priority, however, reflects her long experience working in hotels. “It has an element of hospitality, because we want every night to be a great experience for people sitting in those seats, regardless of who’s on stage,” Lennon says. “And it has to be memorable—whether they’re visitors or locals—because this is part of our community.” 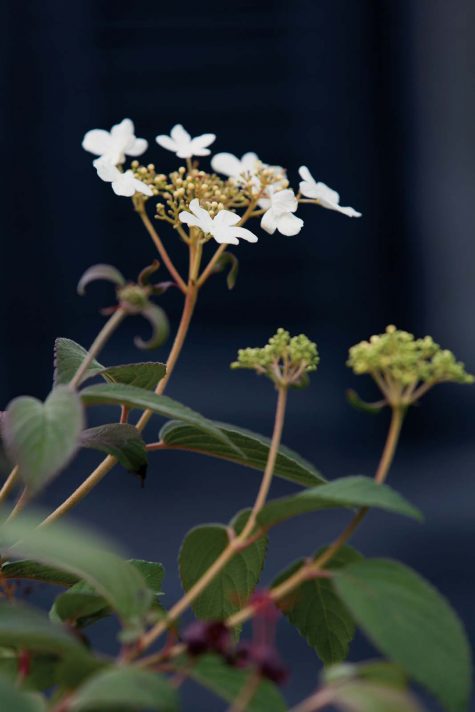 Landscape designer Ted Carter planted white lilacs, daylilies, and hydrangeas, such as this lace-cap variety, to honor the farm’s history. 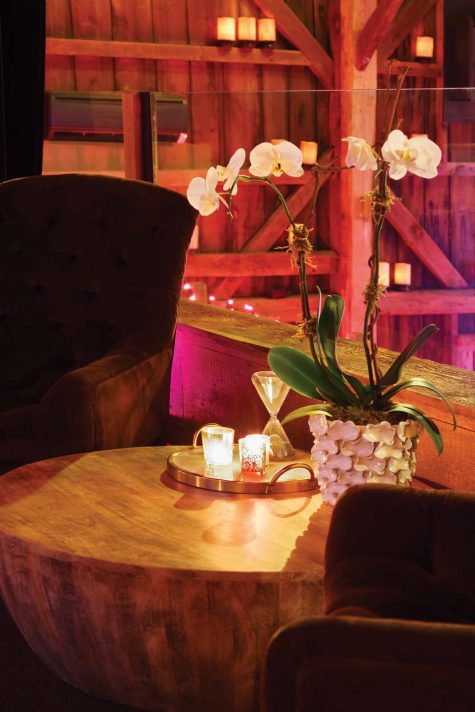 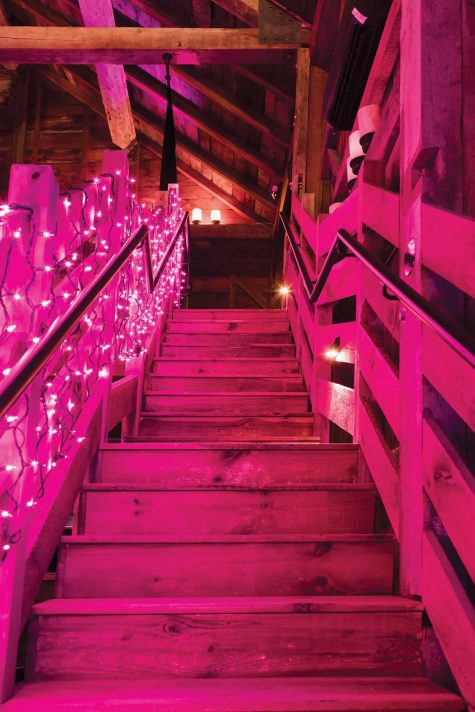