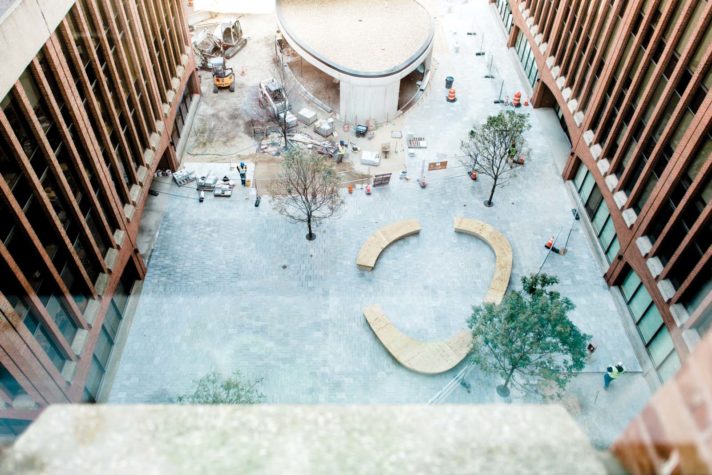 Many of Freeport-based landscape architect Michael Boucher’s projects take him around the world, but the renovation of Canal Plaza in Portland, which he is working on with architecture firm Canal 5 Studio and property owner Tim Soley, has kept him much closer to home. The primary elements of the renovation are the pavilion (shown at top), which will eventually house a restaurant, and a threepiece curvilinear bench that mirrors the pavilion in shape. “It’s a space like you would see in a bigger city,” says Boucher. 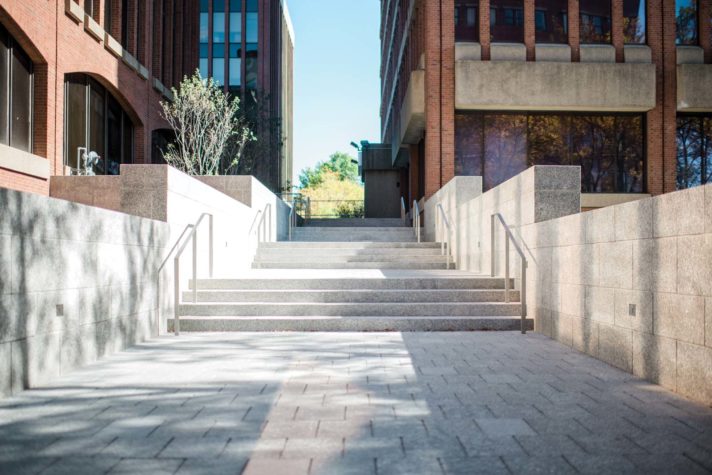 One of two sets of stairs on either side of Canal Plaza, which have been streamlined and lightened, with Maine granite pavers replacing dark brickwork and crumbling concrete. The design of the plaza, along with future plans for more retail shops and restaurants in the surrounding buildings, is expected to draw more pedestrian traffic throughout the day and evening.

On a sunny, early fall morning in downtown Portland, landscape architect Michael Boucher is giving me a tour of the Canal Plaza renovation from the ground up. Perched on a low window ledge outside the One Canal building, which forms the back “wall” of the plaza, he points out the pattern of the granite pavers that make up the plaza’s “floor.” The light gray stone is laid out in 14-foot squares, “like a quilt,” he says, with a combination of wide and nearly invisible joints between the pavers adding further interest to the design. While most of his projects—including this one—are contemporary in feel, Boucher, a native of Old Town, embraced the opportunity to use Maine granite at Canal Plaza. “It’s local, enduring, and has a historical reference,” he says.

Quarried at Freshwater Stone in Frankfort, the pavers replace dark brickwork, one of several elements that made the space feel heavy and tired. Another was a large, circular planter with six overgrown linden trees that provided an unappealing abundance of shade. Now, slender honey locust trees that dot the plaza offer dappled light when they are in leaf and a sculptural element when their limbs are bare, illuminated in all seasons by soft-white lights set flush into the plaza floor. As a gardener, I’m fascinated to watch one of these trees being planted, curious to know how they survive in this field of stone. Boucher explains that the trees grow in special soil developed for urban environments and that each tree location has an aeration and irrigation system. But he’s not as interested in plants as in creating spaces. “We have very skilled horticulturists, and our approach is authentic,” Boucher says. “On a personal level, I would much rather play music or go sailing than garden.”

The team of eight professionals at Michael Boucher Landscape Architecture includes two horticulturists/landscape designers, five landscape architects—including Boucher—and an architect. Started by Boucher in 1994, the Freeport firm has clients all over the world; in fact, most of its projects are outside of Maine. These include private homes in Aspen, Colorado; the Caribbean island of Saint Barts; and Riyadh, Saudi Arabia. They have also developed master plans for Saint Paul’s School in New Hampshire; for a new private university in Dubai; and for desert resorts in Utah and Arizona. The firm’s work is primarily done in partnership with architects. For the Canal Plaza project, Boucher is working with Portland’s Canal 5 Studio, and as the landscape architect for the 58 Fore Street development, his firm (along with many others) collaborated with global architecture and design firm Perkins and Will, whose Boston office is leading the project. “From a building point of view, we study the DNA of the architecture, and then we finish the project the way the architect might,” says Boucher. “We’re not ornamental designers. We like things to be purposeful and have some rationale.”

Part of the landscape architect’s challenge is knowing where a design should stop, especially when it connects to the natural landscape, says Boucher. For a prayer chapel on a church campus in Phoenix, Arizona, Boucher installed a grass lawn, a stark contrast to the desert setting. The swath of green is a strictly defined space used for outdoor events. A concrete bench delineates the edge of the lawn and provides a contrast between the landscape design and the desert hillside beyond it. “It’s a good example of stopping design and leaving it alone,” he says.

It took Boucher’s team 18 months to create the design for Canal Plaza, which is owned by Portland real estate developer Tim Soley of East Brown Cow Management. Its most prominent feature is the pavilion, a single-story structure near the street side of the plaza, built in the shape of what Boucher calls a triangular ellipse, with floor-to-ceiling glass walls allowing passersby to see through it. The unusual shape is the result of a study of pedestrian traffic flow. Behind the pavilion, just off the center of the plaza, three curved benches are arranged to mirror its shape. The benches have poured concrete bases and cumaru wood slat tops that Boucher describes as “fine pieces of furniture.” Amber versions of the same white LEDs that illuminate the trees also shine up from the plaza floor in this area. The day I met with Boucher, he was working to get the hue of the lights just right, an example of the precision that characterizes his work. “There’s a lot here that we troubled ourselves with,” he says.

Boucher didn’t know Soley when he was brought on board, but the two have become friends, with the landscape architect crediting his client for having the vision to allow the project to succeed. “It’s a space like you might see in a bigger city,” says Boucher. “Tim’s willingness to invest in quality materials let us make it simpler.” Soley’s plans for the plaza include a restaurant tenant for the pavilion and eventually converting the ground-floor spaces in the three surrounding buildings into retail stores and additional restaurants. Boucher points out that customers sitting at cafe tables in front of the pavilion restaurant will have clear sight lines to Monument Square and Tommy’s Park. He compares the plaza to European public spaces where people meet, chat over coffee or wine, shop, and stroll, adding that the curved benches are Soley’s “invitation to the city to sit down and talk,” and that more seating may be added as the space evolves. “A lot of the qualities of this project are consistent with what we do everywhere,” Boucher says. “Our goal is for it to feel good and to last, not just to look good.”

Building projects traditionally have cornerstones, and Canal Plaza has an unusual one. Boucher gets especially animated as he shows me the “raw piece of the mountain” that abuts the sidewalk at a primary entrance point for the plaza. “It has lots of things wrong with it that make it great,” he says. Thirty feet long, nine feet wide, and 30 inches tall, with drill marks from the quarry along its flank, the rough-cut granite slab is not just a statement piece; it solved an issue with the grade in that section of the plaza, and it also serves as a bench. Boucher and Soley chose the stone together at the Frankfort quarry. “It has been very personal, and becoming friends with Tim made it more so,” he says. While his firm took the lead, he credits the entire project team, which, in addition to Canal 5 Studio, includes Consigli Construction Company, Greg Day Lighting, and engineers from Woodard and Curran and Becker Structural Engineers. “Landscape architects are the rhythm guitar in the band,” Boucher says. “You don’t notice it’s there, but if it’s not, you would miss it.” 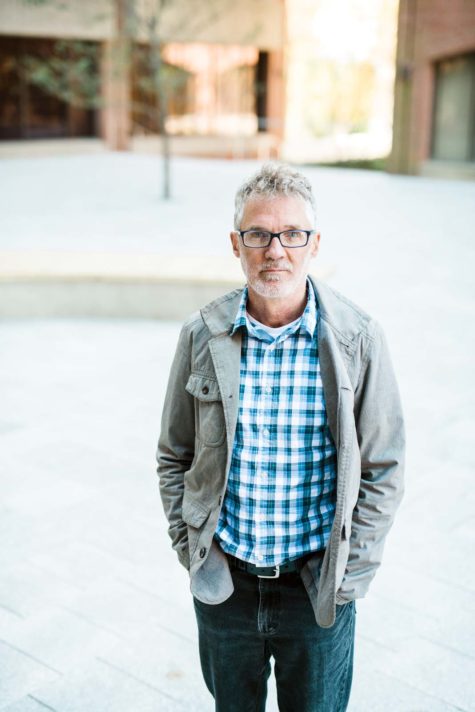