On the Brooklin coastline, a modernist ranch tucked in among the wildflowers

Located on the coastline of Brooklin, this contemporary vacation home was designed by the team at Elliott and Elliott Architecture in Blue Hill and built by Jon D. Woodward and Sons in Sedgwick. It features three distinct living spaces linked by a series of “connectors.” 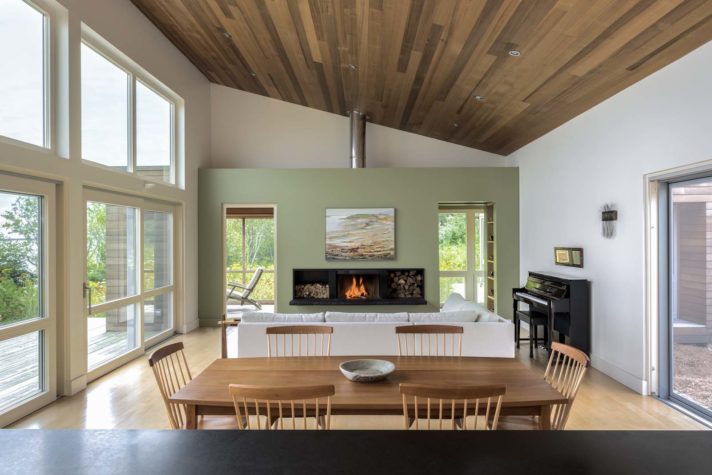 It was important to bring the outdoors in, and this soft green hue reminiscent of spring grass echoes throughout the house. 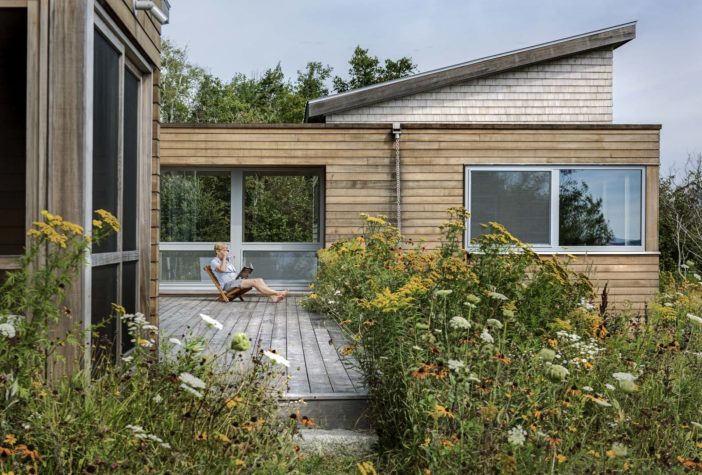 Instead of putting in a sculpted, tidy garden, the homeowners opted for a more wild look. The landscaping was done by Bobbie Burdick of Burdick and Associates, and Catherine Rees of Brooklin worked on the garden near the front entrance. 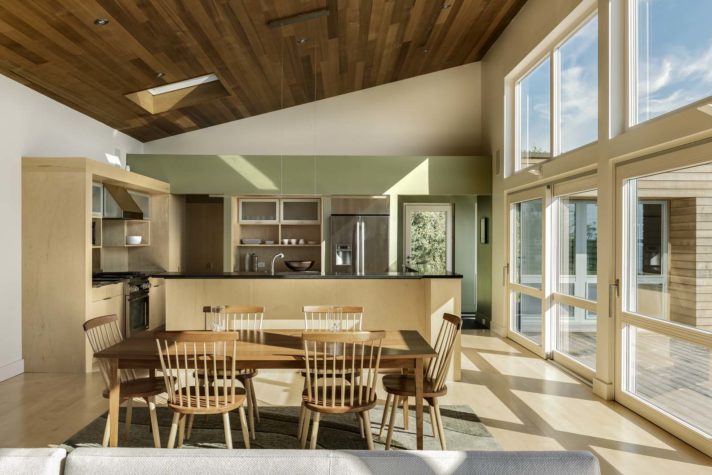 This center structure is the heart of the house. On one side, a guest wing has rooms for the homeowners’ son and friends. On the other side, tucked back away from the ocean, is the owners’ suite. This grants every member of the family privacy, while the main room provides an area where they can gather together to cook, eat, and lounge by the fireplace. 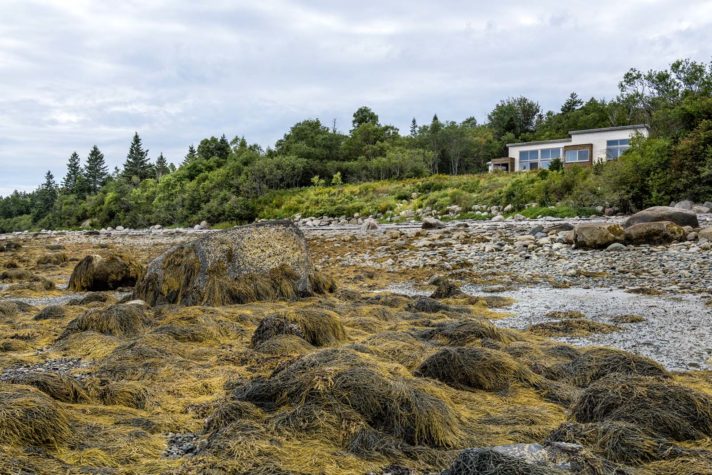 “What we tried to do was make sure the house looks like it belongs on the site. It shouldn’t look like it was designed somewhere else and thrown onto the land,” explains architect Matt Elliott. 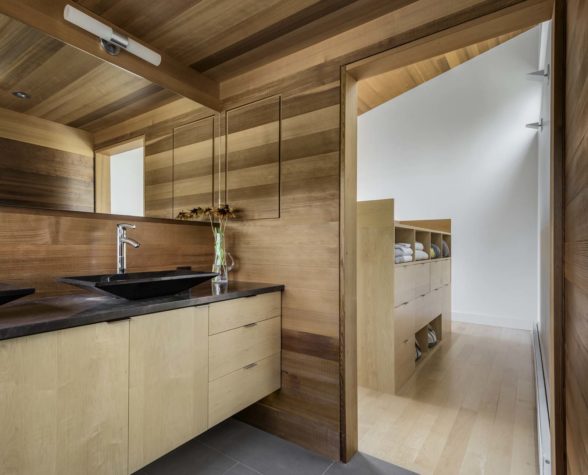 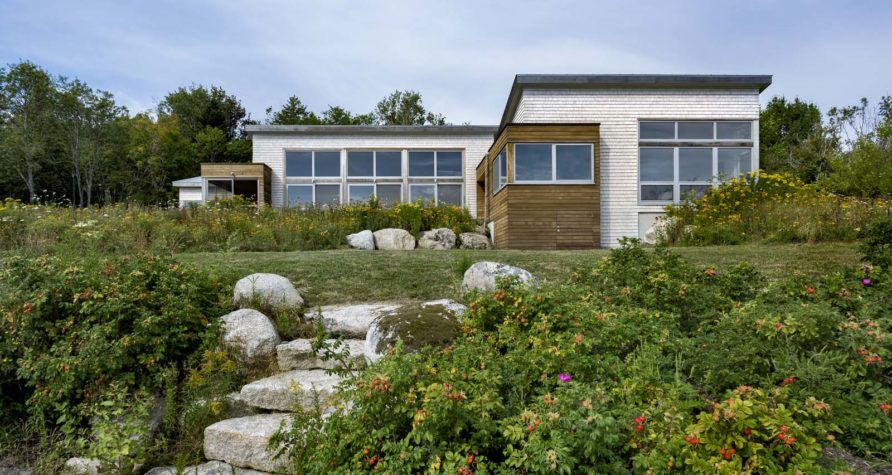 To visually distinguish the various small buildings that make up this staggered house, Elliott and Elliott used two different siding materials: horizontal cedar planks for the connectors and white cedar for the main living spaces.

Inspiration can come from the oddest places. Often, it’s easy to see the threads that tie two distinct buildings together. You can visually trace how a contemporary wood home took certain forms from a traditional Japanese pavilion or how a Maine mountain cottage pays tribute to a Swiss chalet. But with Chris DeGraw and Terry Muilenburg’s house, it’s a bit harder, partially because the low-lying home is so truly unique. “We were inspired by a cruise ship we were on once,” says DeGraw of their strikingly contemporary, sparse, and compact coastal vacation home in Brooklin. “We liked how it was built so that everything had its own place, that everything could be put away,” he elaborates.

This, I suppose, makes sense, because there is nothing else that could link their staggered cedar-sided hyper-contemporary ranch to a gaudy floating behemoth. But it’s true: every object in this home seems to belong. Like a cabin on a boat, there is intention behind the design and a sense of utility. But unlike a cruise ship, which never seems to belong in a harbor and always looks a bit too big for its moorings, this house sinks right into the landscape. “That’s very important to us,” says Matt Elliott of Elliott and Elliott Architecture in Blue Hill. “What we tried to do was make sure the house looks like it belongs on the site. It shouldn’t look like it was designed somewhere else and thrown onto the land.”

Built by Jon D. Woodward and Sons of Sedgwick, the house is made of three cabins that are linked by a series of smaller structures that the owners refer to as the “connectors.” Early in the design process, DeGraw and Muilenburg approached their original project architect, Eric Reinholdt, with their idea of building three separate cabins on their coastal plot of land. (Reinholdt has since left Elliott and Elliott Architecture to start his own firm, 30X40 Design Workshop.) “My idea was to have a little compound where the cabins were linked by decks,” DeGraw explains. “But we realized we might want to spend more time up there than just visiting in the summer.” Instead of designing a series of decks, Reinholdt and Elliott suggested they create indoor spaces that could bridge the cabins, thus creating a structure that feels reminiscent of a series of train cars: the building can be broken into distinct components, or it can be viewed as a continuous whole, depending on where you stand.

The result is a building that can be used year- round. In the depths of winter, DeGraw and Muilenburg won’t have to brave the frigid ocean spray to get from their living space to the owners’ suite. But Muilenburg says she’s happy with the feeling of se- clusion that the segmented house allows. “Having the connectors helps demarcate the separate areas of the house and makes each part feel private,” she says. “The idea was that we would have our own spaces. My son has his area, and we have our area,” says DeGraw. “This works for guests, too. I love having guests, but everybody needs a place to retreat to.” There are two bedrooms on opposite sides of the house—one is DeGraw and Muilenburg’s bedroom and bathroom suite, while the other is for guests and offspring—and they bookend the “central pavilion,” as DeGraw terms it. This middle cabin houses the kitchen (complete with minimalist built-in cabinetry and a black granite–topped island), the dining area (where a gracious maple dining set is ready to seat eight), and the living area (featuring a plush white couch that faces a wood-burning fireplace). “This is where we can all come together,” DeGraw says.

In order to make the transitional spaces look distinct from the cabins, Elliott selected two different kinds of siding: horizontal cedar planks for the connectors and white cedar for the larger areas. The rooflines are also different: the connectors’ are flat, while the cabins’ slope. Inside, the designers offset the connectors by painting the shared walls an understated but natural shade of green, thus creating a series of accent walls that flow through the house and

provide a unifying color scheme. “That green is a story in and of itself,” recalls Muilenburg with a laugh. The first green the couple picked out was “way too light—minty,” she says, a fact that they discovered after it had been painted on an interior wall. They decided to drive up from their home in the suburbs of Washington, D.C., and spend a winter weekend looking at various shades of green. They ended up with a subtle sage hue with gray and yellow undertones. “Green is a very hard color,” admits Elliott. “We needed to find one that would go with the ceiling and the maple on the floor. Some were too gray, others were more pastel. They had a vision, and my role was to work with them until we found exactly what they wanted.”

What they wanted was an organic color that would echo the wildflowers that grow alongside the deck in lush abundance. “We didn’t want a manicured lawn,” Muilenburg explains. “What we really wanted was to have a wildflower meadow close to the house.” But before they started plant- ing (before the foundations were even poured), the couple stabilized the shoreline. Bobbie Burdick of Burdick and Associates was called in to help protect the fragile coastline from erosion. Burdick also created a flat space where the couple could play croquet, as well as a fire pit area with granite seating that overlooks the water on the south end of the property. After the house was completed, DeGraw and Muilenburg could finally create their deck-side meadow, which is filled with spikey bee balm, blush pink Joe Pye weed, and delicate fronds of astilbe. “In the summer, it’s a very active bee and butterfly haven,” says Muilenberg.

This is the real appeal of the staggered block home—it is oriented toward and around nature. The minimalist finishes and clean lines that dominate the surfaces indoors do not distract from the sweeping water views or the wooded front yard. The land is ever-present in this house, as is the sea. “The house is tucked right into trees,” says Peter Woodward of the memorable build. “But if you’re in the guest room looking out the windows, you feel like you’re on the deck of a boat, right out on the water.” Elliott adds, “The way the building is set on the site created a series of ways that they could relate to the land.” The owners’ suite, set toward the back of the plot, feels private and cozy, while the guest room feels intimately connected to the ocean. “There’s also an outdoor shower off the owners’ suite,” reveals Elliott. “When there are no guests around, they can shower right outside their bedroom. And the way the sun interacts with the building, it creates this little warm micro- climate.” (But should the couple yearn for a little more privacy, they can always pull out the red cedar privacy screen that Elliott cleverly tucked into an alcove.)

It’s been four years since the project was completed, and DeGraw and Muilenburg continue to be surprised by how much they enjoy their compact contemporary getaway. They were recently going through their old papers when they discovered their original wish list. “We were surprised with how much of it came to pass in really nice ways,” says DeGraw. “We’re in the quintessential down-sizing phase of our life, and we didn’t want to have any rooms we didn’t need, or any space we didn’t use.” They use every room in the house, but they never feel cramped or limited by the small footprint. Elliott is also pleased with how the house came together, especially now that the flowers have grown in and the Rosa rugosa are beginning to flourish. “It’s simple,” he says, “but there’s a structural complexity. As I walk around the house, I see how it sticks out on an edge, then tucks in. I just really love it.” 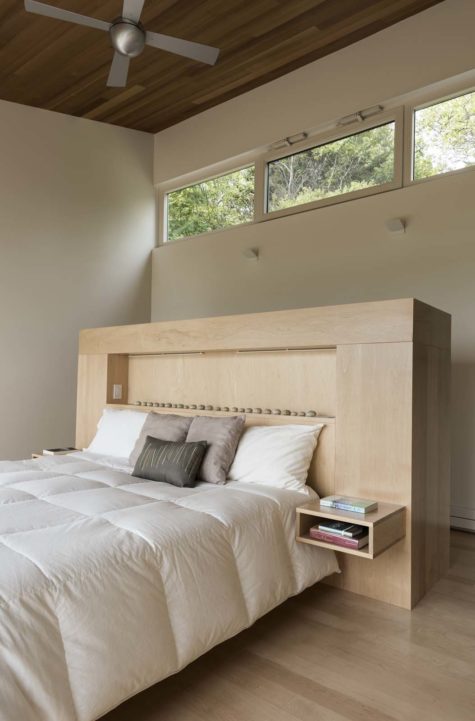 The house has a small footprint, and the builders installed many pieces of built-in furniture, such as this blonde wood bed with storage tucked around back, to help squeeze the most use from every inch. 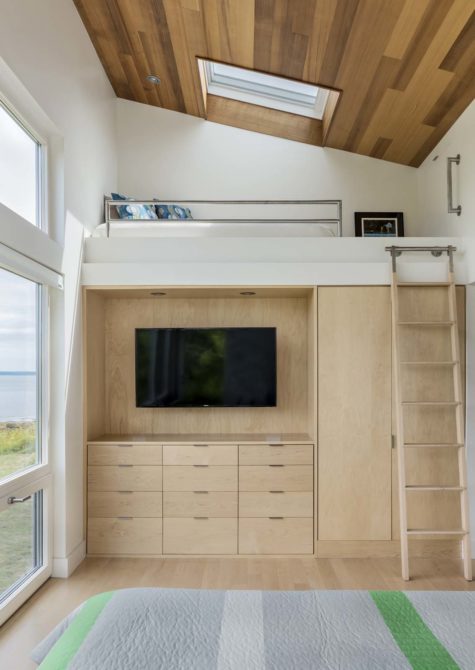 The built-in cabinetry, such as these built-ins in the guest room is the work of Mark Gray of Owen Gray and Son in Brewer. 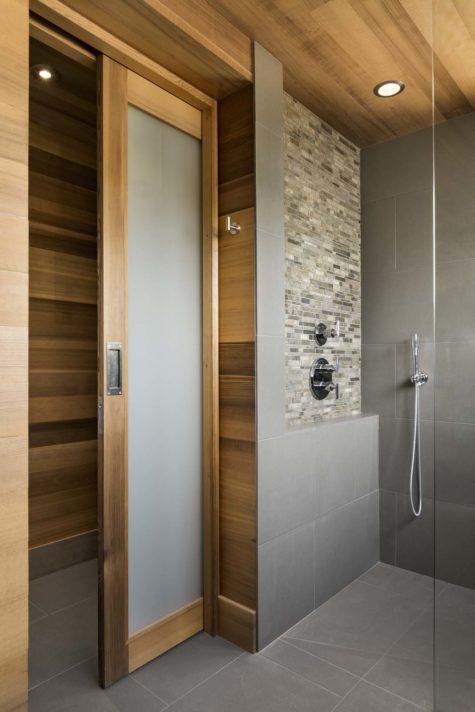 The designers opted to skip the lip on the glass-encased shower, as in many contemporary European bathrooms.