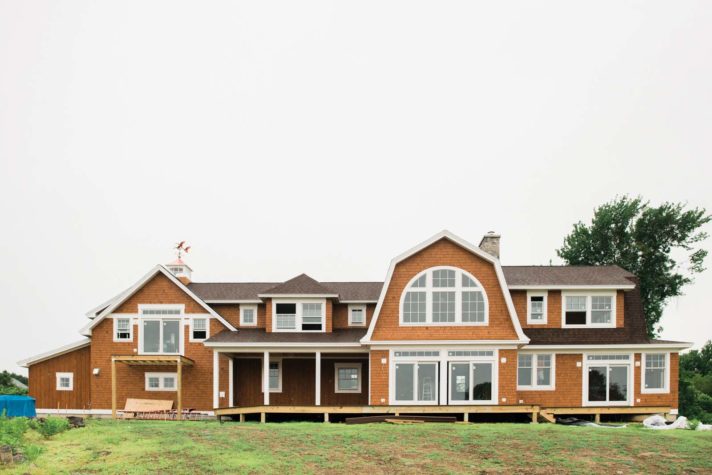 This home at Tidewater Landing was designed by Kennebunk River Architects, one of the local architects recommended by Larry for homes in the development. “With the elevation, the contours, and the views, they really have to be custom designed,” he says. 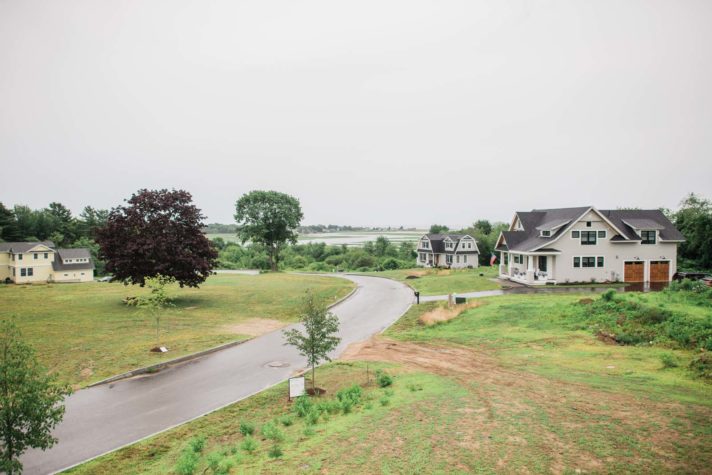 All except one of the 17 home sites at Tidewater Landing will have a water view, which includes the Webhannet River, Wells Harbor, and the open Atlantic.

By thinking ahead, Larry Duell of Father and Son Builders hopes to preserve his business for the next generation

From the top of the gently sloping hill at Tidewater Landing in Wells, the view extends over the Webhannet River to Wells Harbor and beyond to the open Atlantic. It’s a classic southern Maine vista—marsh, water, beach, and sky—and until recently, it belonged to a single home. “Driving by all these years, I never knew this was back here,” says co-owner Larry Duell of Father and Son Builders, who bought the property in 2014 from the former owner’s family. “I saw the view and said, ‘Oh goodness.’ There’s no land like this left in Wells.” Tidewater Landing now has 17 home sites arranged around a curving road that ends in a cul-de-sac at the bottom of a hill. Beyond lies open space, which will eventually include a path offering access to the river for kayaks and canoes. All except one of the custom homes will have a water view. “As the builder and developer, I’m able to tell people where their house has to go so I can protect the views for the people behind them,” says Duell.

The project is the first development for Father and Son Builders, which was launched by Larry’s father, Lyle, in 1984. A Church of Christ minister, Lyle had moved his family from upstate New York to New Hampshire to serve at a church there. “I decided I’d put up a modular home to live in, and try to sell a few,” Lyle says, noting that his contract with the church allowed him to take on a part-time job. “In ’84 I sold eight homes—I had never built a house in my life before—and I think the next year we sold 26.” According to his son, the decision to go into business was largely financial. “He realized
you can’t put two kids through college on a minister’s salary,” Larry says. The Duells established an office in Lebanon, just a few miles from the New Hampshire border yet close to the southern Maine communities of Sanford and Berwick. The company soon moved from modular homes into custom building. “In ’87 or ’88 we built close to 50. On our original stationery, we had ‘From castles to caves,’” Lyle says, although most were modestly sized houses, he adds.

Larry left New England for Tennessee, graduating from Lipscomb University in 1990 with a degree in finance and with a graduate degree in architecture from the University of Tennessee three years later. He returned to Maine and joined his father in the business, married, and had a son. Three years ago, Lyle retired from building while continuing to serve in the church. He wrote two religious books and started a blog. Then Larry’s wife, Stephanie, was diagnosed with triple negative breast cancer, a very aggressive form of the disease. She passed away in May of 2016 at 36 years old. “I took eight months off to be with my son, and my dad came out of retirement,” Larry says. “He’s never gone back.”

Now Lyle works out of the Lebanon office while Larry is in Wells, overseeing Tidewater Landing and sites elsewhere on the coast. “My dad takes care of all of our inland homes, which are mostly entry level—small ranches, Capes, and colonials,” says Larry. For the homes at Tidewater Landing, Larry has a list of architects he recommends, including Kennebunk River Architects, Lindsey Architects, and William Ross Design. “Up until a year and a half ago—when we started building here—I did 95 percent of our house plans, but now I just don’t have time anymore,” he says. Tidewater Landing’s bylaws specify that homes have to be either shingle-style or Maine cottage–style, and Larry discourages potential buyers from building with stock plans. “With the elevation, the contours, and the views, they really have to be custom designed,” he says. “The subdivision requirements are pretty strict. We don’t allow any vinyl siding or vinyl windows. Every home here so far has gone with cedar shakes.” The company has recently hired a project manager, allowing Larry to concentrate on sales and marketing. “In summertime, on a weekend, I’ll talk to 100 people here; that’s what I like to do,” he says.

In the 1980s Father and Son Builders had as many as 30 employees, but when the recession hit at the end of that decade, they had to let most of them go. “We actually had our own foundation crew, our own foundation forms, and trucks—we did everything,” says Larry. “I could just see my dad getting grayer and grayer. Now, we sub everything out and it’s much easier.” Most of the subcontractors they use, however, have worked with the company for years, and the loyalty works both ways, he says. “I don’t shop bids. If a guy has been with me for 15 years and he gives me a price, I know that’s the best price he can give me, and I’m not going to go out and look for a better one.”

Larry is active in local and national trade associations, having served as the state president of the Home Builders and Remodelers Association of Maine. “I’m very involved in housing advocacy, everything from codes to environmental policy,” he says. He sits on the board of directors of the National Association of Home Builders and the Home Builders and Remodelers Association of Maine, working with both groups to help launch an apprenticeship program for residential carpenters, which was approved by the Maine Department of Labor last spring. Designed to address the skilled labor shortage, the program will provide students who finish a mandated course of study at a technical high school with paid on-the-job training; some of the cost will be reimbursed by the state.

Both avid outdoorsmen, Larry and Lyle have together climbed mountains around the world, including Mount Kilimanjaro in Africa and Pico de Orizaba in Mexico. For Larry, those activities are now on hold as he runs his business and raises his son, who he’s hoping will inherit his love of the outdoors. His construction industry activism is also tied to his future plans; just as he wants to preserve the views at Tidewater Landing for current and future residents, he’d like his son to carry on the family’s homebuilding legacy. “He’s a very good designer on Minecraft,” Larry says with a smile. Perhaps one day, Father and Son Builders will include the next generation of Duells. 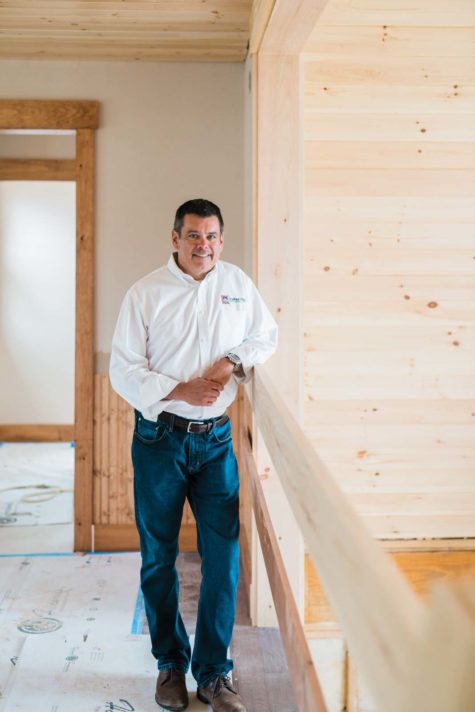 Larry Duell, who owns Father and Son Builders with his father, Lyle Duell, on the second floor of a home they’re constructing at Tidewater Landing, a waterfront development in Wells. 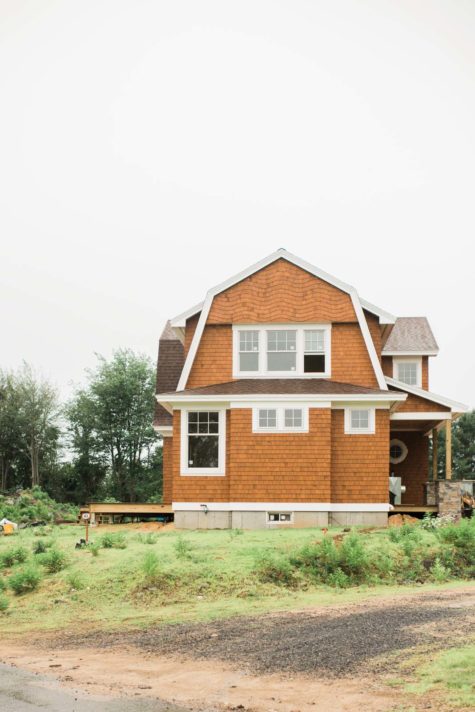 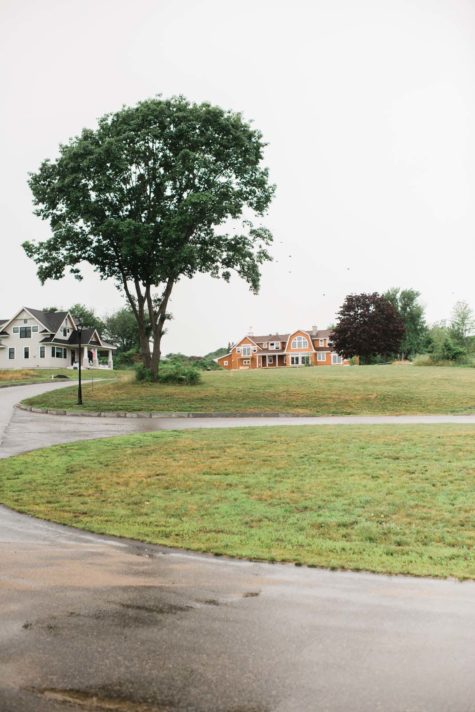