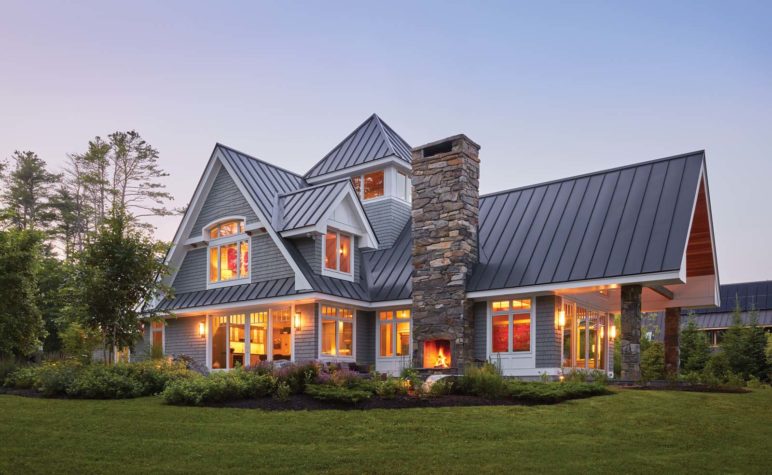 This classic contemporary home in Freeport was designed by architect Gary Lowe of Lowe Associates–Architects in Chestnut Hill, Massachusetts, built by John Rousseau of Rousseau Builders in Pownal, and features landscape design by Todd Richardson of Richardson and Associates in Saco. Rousseau installed the wave-inspired shingle work in the upper gable to echo forms found in the kitchen backsplash, which was the work of Distinctive Tile and Design in Portland. 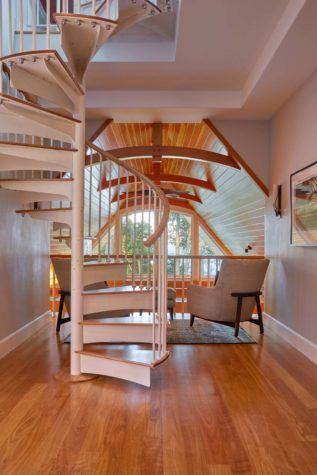 The stair’s red birch steps match the flooring by Custom Interiors. The custom railing and spiral stairs are from Duvinage. The chairs are from Arhaus. 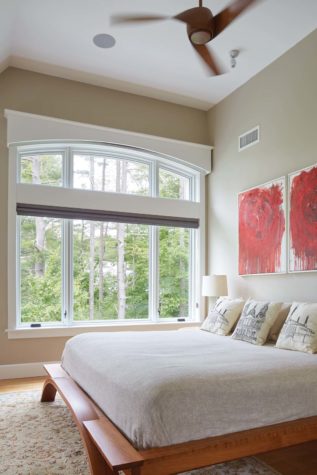 The owner’s suite is located on the second floor and is furnished with a Vita bed by Thos. Moser. The paintings are by Fatima Tahtali Furrer. The house is also wired with a music system that the homeowner calls one of her “best investments.” The audio system was installed by Tucker and Tucker Associates Audio and Video by Design (they also installed the security cameras and remote-controlled lighting) 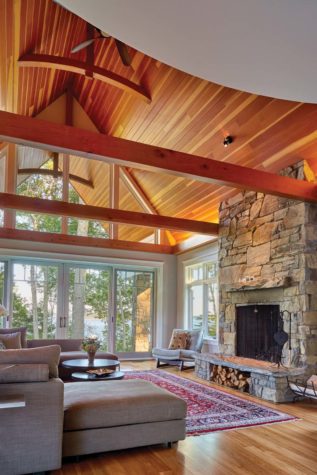 The house features an open floor plan, high ceilings, and large windows, all of which help take full advantage of the ocean views. 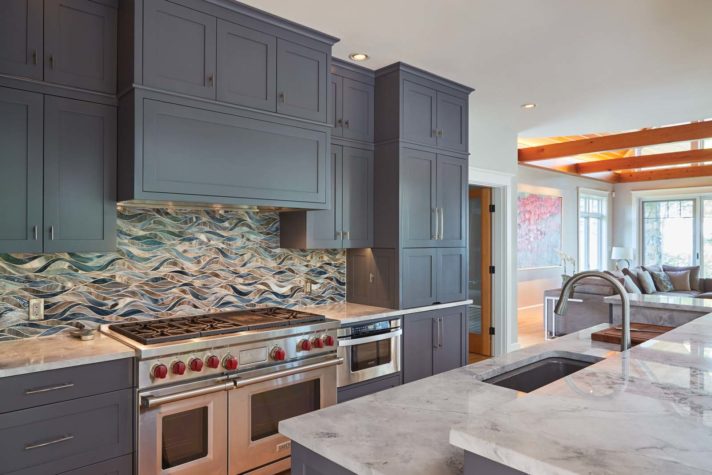 The kitchen features cabinetry by North Yarmouth Woodworking, handles and pulls from Decorum Hardware, and an intricate glass mosaic tile backsplash installed by Distinctive Tile and Design. The countertops are white granite, and the range is by Wolf. The cabinets are painted Ashland Slate from Benjamin Moore and Co. MHD 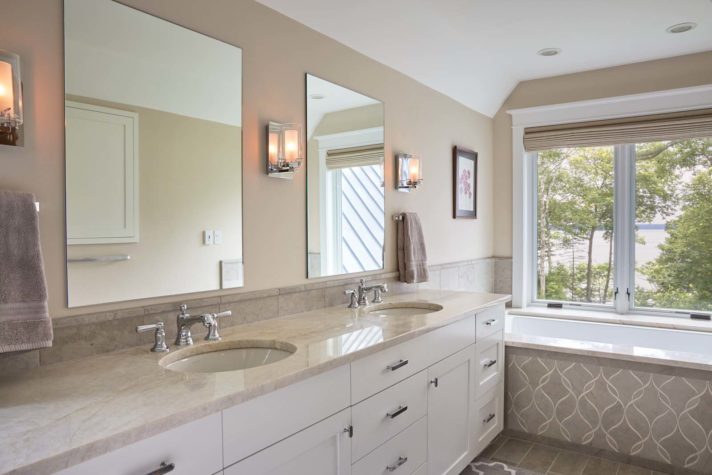 The Kohler sconces in the owner’s bathroom are from the Lighting Center at Rockingham Electric. (The homeowner worked with Lighting Center designer Cindy Regnier on her overall lighting plan.) Distinctive Tile and Design installed Claridges Waterjet mosaic panels made from limestone and marble on the side of the tub. 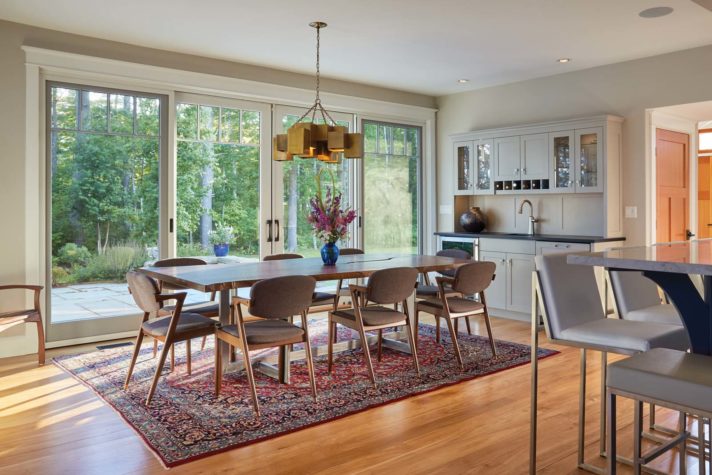 The dining area showcases the beauty of natural wood, from the red birch floors to the liveedge slab table, designed and built by furniture maker Timothy Rousseau. The geometric brass lighting fixture is from Mitchell Gold and Bob Williams. 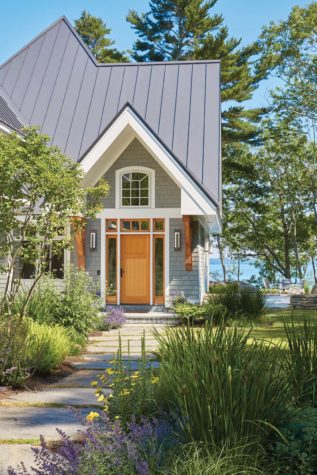 The front entryway has a Douglas fir door from Hancock Lumber and windows from Pella. 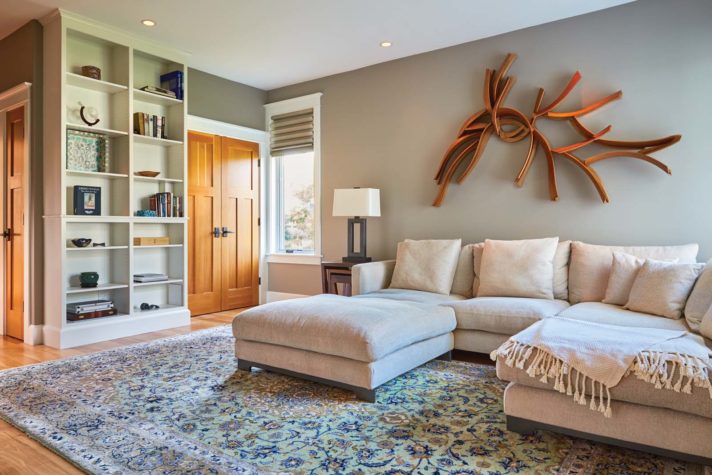 In the media room, Leah Wood’s In and Down and Up and Out sculpture hangs above a Camerich Los Angeles sofa. The blanket is Brahms Mount, the doors are Douglas fir, and the shelving is by North Yarmouth Woodworking. 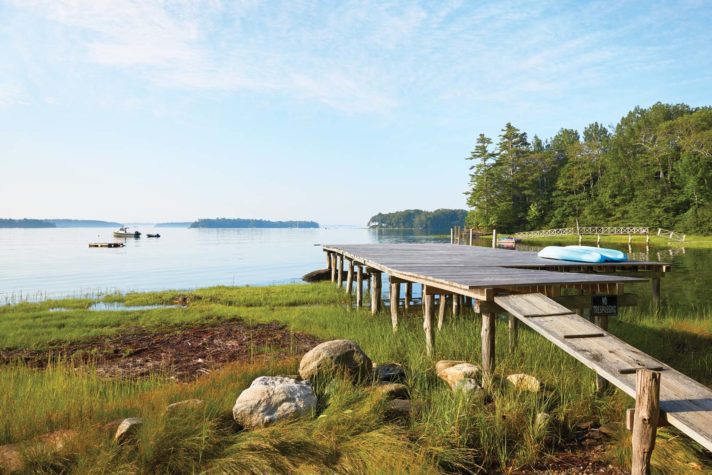 When the homeowner bought the property, the only thing on the lot was this old lobster wharf, which was once used for storing traps.

Our experience of a place unfolds through a sequence of moments. We see the light on the water, hear the leaves rustle dryly on the trees, and smell the scent of salt on the air. We approach a place through our senses, and as I pull into the driveway of this classic contemporary Freeport home, designed by architect Gary Lowe of Lowe Associates—Architects in Chestnut Hill, Massachusetts, and built by John Rousseau of Rousseau Builders in Pownal, I enter into a purposefully designed experience, one that was thoughtfully planned to take full advantage of the natural beauty of the Maine coastline.

Lowe’s effect on the property begins before you even catch sight of the house. “I had the idea to add a curvature to the driveway to make it feel like a series of experiences rather than a straight shot to the water,” Lowe says. As you enter the two-and-a-half-acre lot, you see first a copse of pine trees, then the beginnings of the perennial garden, and then, finally, the seamed gabled roof of the house.

It wasn’t always like this. When the homeowner first scouted the land back in the winter of 2012, she entered a cleared track that brought her straight from the road to overgrown lawn and encroaching forest. She took a straight line down the narrow, empty property, which brought her to the ocean, where an old fishing shack stood next to a weathered lobster wharf rising from a rocky bed of sea heather and kelp. (“I knew it was perfect,” she remembers. “I signed the contract the next day.”)

Despite the many attractions of the property, Lowe and Rousseau did face some challenges when it came to building within the allotted space. They knew from the beginning that the house could be only 40 feet wide, thanks to zoning regulations and easements. The goal, Lowe explains, was to capture as many views of the water as possible, from as many rooms as possible. Since the homeowner didn’t want to live in a glass box, this meant they needed to use elements of classic New England architecture in creative ways. Although you would never guess it from the exterior, “the house has the same confining restrictions as a typical shotgun house,” says Lowe. “I decided to take a different approach and stagger the disposition of spaces, so that the dining room, living room, study, media room, and owner’s bedroom would all get views of the water.” Much like Lowe’s introducing a curve in the driveway to optimize the visual appeal, he also created a series of moments within the house, starting with the front entrance and ending, depending on your preference, either in the cool dark of the wine cellar or the sunny heights of the thirdfloor “crow’s nest.”

The first floor of the home features an open floor plan, which flows from the entryway (an area that also includes storage closets and stairs to the second and third floors), back toward the kitchen and dining room (which sit side by side in the middle of the house), to the spacious living room, which features cathedral ceilings and a wall of windows that looks out toward the water. A second-floor interior balcony sits above the kitchen and dining room. “One detail of the house that I love is the rounded arches in the living room ceiling,” says the homeowner. Instead of cutting straight across the open space, these Douglas fir beams curve upward, opening the view and echoing the rounded shape of the balcony. “Necessity is the mother of invention,” adds Lowe. “We were dealing with a confined space, and so I made the arches so that even a very tall person standing on the balcony could see the water. Then, once the arch came into play, we decided to carry it all the way through.” Curved arches can be found under the roof eaves and gables; Lowe even added a smaller arch to the entryway, using this subtle repetition to create a sense of cohesion between the classic New England exterior and the contemporary decor of the interior spaces.

“When we were designing the house, I knew I wanted something classic that wouldn’t age poorly or feel out of place in Freeport,” says the homeowner, who grew up nearby and has recently returned to Maine after years of living abroad. “But I also have a lot of midcentury modern pieces, and I didn’t want those to feel out of place, either.” Lowe adds, “The homeowner has a clear sense of taste, and it was important that we create something that references historic and traditional homes but would also work with a modern interior.” Fortunately, natural wood can help bridge this divide, and so Rousseau installed cedar siding on the exterior, red birch floors inside, and Douglas fir accents throughout. The homeowner also dedicated her time and energy to sourcing suitable statement pieces (with help from interior designer Frances Hodges of Frances G. Hodges Interiors in New Hampshire, who helped balance the homeowner’s vision and provided guidance when selecting key pieces). One standout feature is the eight-foot-long dining room table, made from a single slab of black walnut and a metal base, which sits below a modern, geometric brass chandelier. “I contacted the Center for Furniture Craftsmanship to get recommendations for furniture makers,” the homeowner explains. “I ended up using one of their instructors, Tim Rousseau [no relation to John]. We worked as a team to create this table, and it’s perfect. I use it every single day.”

Throughout the home, raw wood, neutral colors, large windows, and traditional Persian rugs act as anchors for the owner’s collection of contemporary and abstract art. The living room is dominated by soft gray tones on the sofa and walls, and is accented by a saturated red and blue rug and a single large painting of red flowers by the Turkish-born artist Fatima Tahtali Furrer. The homeowner has hung a series of paintings by Saint Martin–based painter Wilfrid Moizan in the upstairs hallway, plus several more in the guest rooms. The homeowner’s style is uncluttered, which allows each painting to pack a large visual punch.

While windows and calming colors dominate the upstairs, the tone shifts dramatically as you descend a set of stairs, lit from below with inlaid square lights, into the basement. “Once you open that door, everything changes,” Rousseau says. “We created an old-world wine cellar. You go from a highly polished, almost formal space to somewhere back in time.” Down a rough plaster-coated hallway lined with doors painted to look a century old and behind a floor-to-ceiling glass wall, an elegant tasting room is complete with a small kitchen, a gleaming walnut table, black midcentury modern chairs, an industrial-style pendant fixture, and dozens of racks of aging wine.

While Lowe drew the plans for the basement space, he recalls being caught off guard by the finished product. “One day, when I visited the job site and was walking down to the basement, I felt my hand on the handrail touch this stone,” Lowe recalls. He looked down and saw the granite newel that Rousseau had dreamt up and installed just days prior. Using the same granite that landscape designer Richardson and Associates was placing in the patio, Rousseau created another indoor– outdoor bridge—an upright stone post bound to an iron balustrade. It’s a small detail in a house full of details. The space is “a perfect experience in that house,” says Lowe. “Just when you’re not expecting it, you get this moment.” It’s where the homeowner likes to cap off her evenings with friends. “I wanted to have an intimate space,” she says. “Everything in this house is designed to be used, to be enjoyed. I want it to last for many generations.” 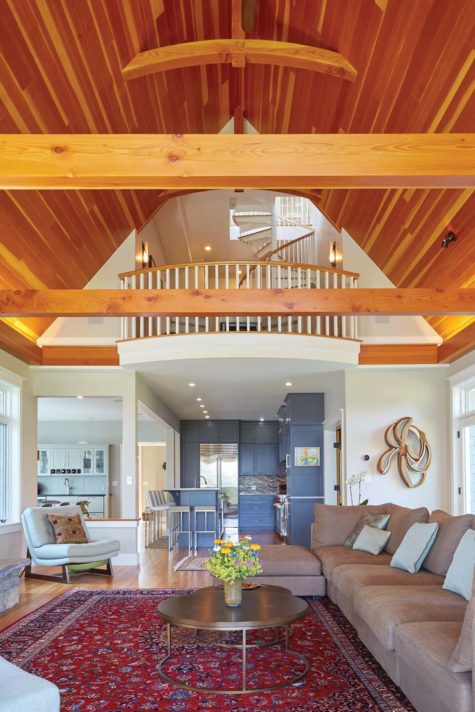 In the living area, the sofa is from Camerich Los Angeles, and the coffee table is from Mitchell Gold and Bob Williams. The wooden sculpture, Back and Forth, is by artist Leah Woods. The floors are red birch, and the beams and ceiling are Douglas fir. 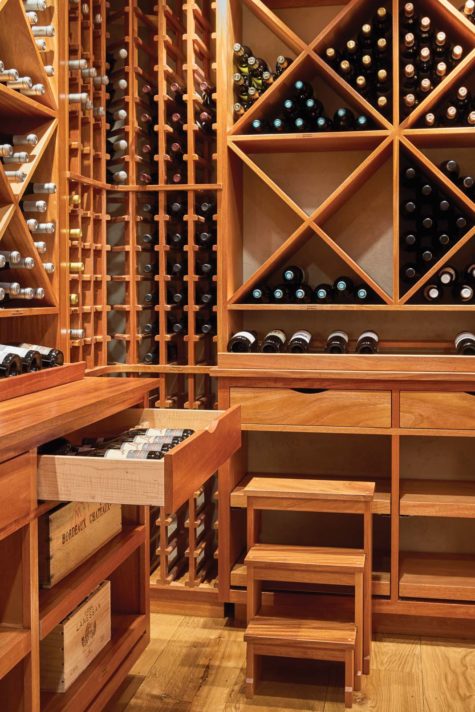 The homeowner helped design the mahogany storage system for the cellar, which was adjusted and tweaked by Lowe and Greg Soper from North Yarmouth Woodworking. 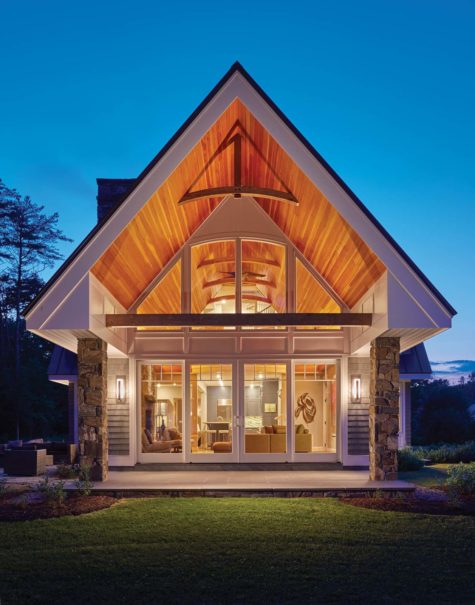 The living room faces the water and features an extended Douglas fir overhang. The pillars are covered in masonry that was installed by G.M. Libby and Sons to echo the forms of the interior and exterior fireplaces.