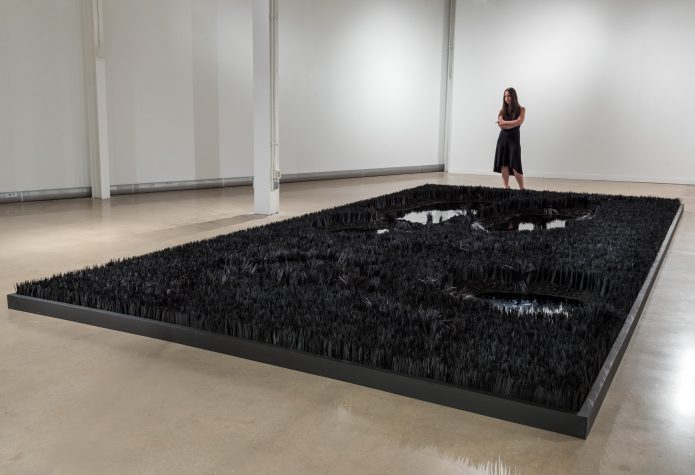 With past shows at the Portland Museum of Art and Bowdoin College Museum of Art, Lauren Fensterstock is well known in the Maine art scene and beyond. Recent shows, including Theories of the Earth at Wheaton College in Massachusetts, The Order of Things at Claire Oliver Gallery in New York, and Colorless Field at Museum Rijswijk in the Netherlands, have established Fensterstock as an artist with a novel perspective on nature. We caught up with her to ask about it.

Q. How does nature inspire your art?
A. We often speak of nature as something separate from human life, but we are very much a part of it. The way we perceive and shape nature in gardens comes largely from cultural impulses influenced by historic precedents, literature, and scientific discovery. With my artwork, I try to reveal the cultural underpinnings framing these ideas. For example, if I mix together elements of a picturesque garden with the twentieth-century earth art of Robert Smithson, as I did in works like Tea Room Displacement, we start to see that nature can be a fractured and complex concept.

Q. What is “the order of things” in your work of the same name?
A. That work is a large natural history cabinet that is being overtaken by an organic growth. It was partly inspired by a book of the same name by Michel Foucault. He examines the idea that every time period has its own sense of truth. The piece is partly a human-ordered collection, partly a modernist grid, and partly a nod to Mother Nature. But even what looks natural is, of course, painstakingly fabricated. For me, it symbolizes that there are many ways to interpret and describe the same object.

Q. What do you think your art is saying about the natural world?
A. Ultimately I would say that my art isn’t about something, it is something. As an artist, I’m interested in the way other people give things meaning. An artwork is a prompt, and the viewer is responsible for giving it life and purpose. In the same way, the natural world is not finite; it is what we perceive it to be. That perception is shaped by our experiences, our biases, and our moment in time. When seeking a single truth about our environment, we can forget that we’re each looking through our own cultural lens.