A Legacy in Listening 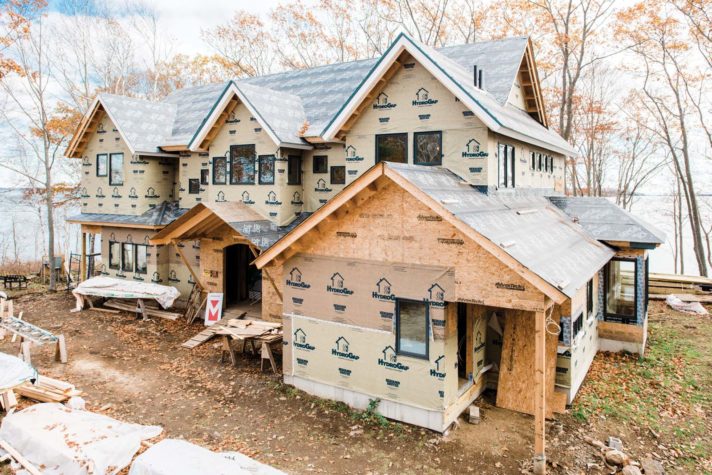 On the entrance side, the island home includes three small windows on either side of the center gable—one set of windows illuminates a staircase, and the other a laundry room. Multiple gables, which Morris says help to break the scale of a large home, are a signature of the architect’s work. 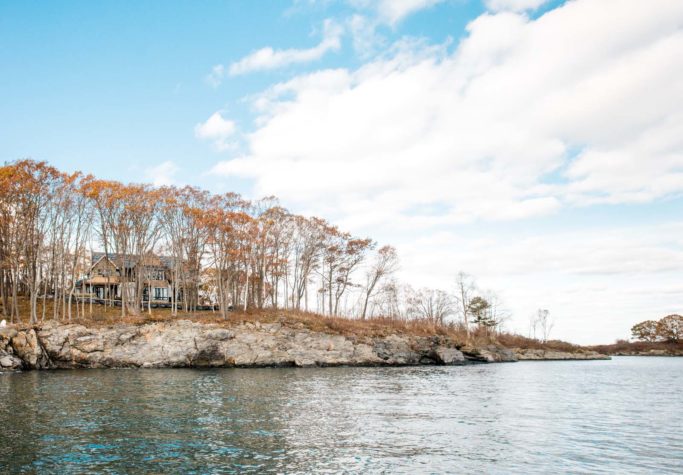 One of architect John Morris’s latest projects is this home on Great Diamond. Island in Casco Bay 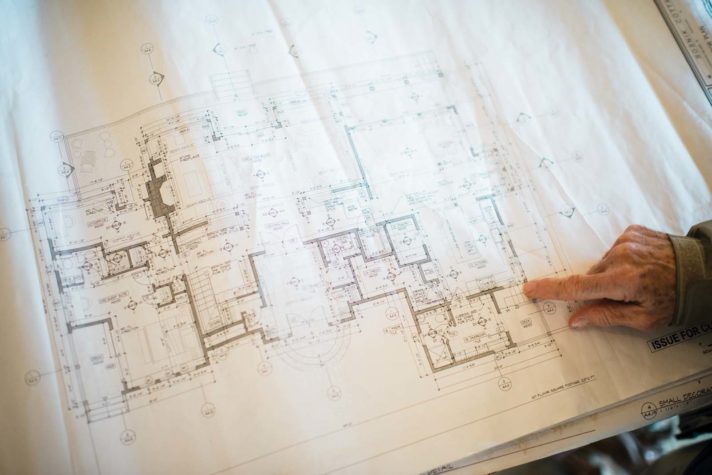 The seeds of John Morris’s long architecture career were planted in his childhood home in northern Westchester County, New York. Until he was 15, Morris lived in a circa-1950 ranch designed by architect Huson Jackson, who was a friend of the family. Jackson would later join famed Spanish architect Josep Lluís Sert, along with Ronald Gourley, to found Sert, Jackson, and Gourley in Cambridge, Massachusetts. The firm designed a number of prominent buildings at Harvard University, and both Jackson and Sert taught at Harvard Graduate School of Design, Sert spending more than a decade there as dean.

For high school, Morris went off to a small progressive school in Vermont where students volunteered for daily jobs, including kitchen duties, maintenance work, and even construction. Leading a crew of fellow students to convert a former cow barn into a library, Morris caught the bug. “We were aided by a local architect who gave his own time to envisioning this thing and telling us what to do and how to do it,” Morris recalls. “I thought this might be something to do for real.” After spending a year at “the wrong college,” Morris turned to Jackson for advice on where to pursue a bachelor’s degree in architecture. “He told me that of course he liked the school where he was, but he also suggested the University of Pennsylvania,” says Morris, who received both his undergraduate and graduate degrees from the university. Morris and his wife, Susan, came to Maine “fresh out of Penn, because some close family friends had asked me to supervise a house being built on Vinalhaven—for the sum of $400,” says Morris. “Having nothing else to do, and this being 1970, I thought ‘Hey, what the hell.’ We lived in our car for a while in Camden Hills State Park, and then we rented a house in Warren.”

Morris eventually went to work for the Camden based general contractor who was building the Vinalhaven house, along with many others. “At that time, people were building second homes to beat the band,” he says. “A lot of them were kit houses, but some weren’t, and so it was a second education for me to learn how buildings actually went together, and how to get them done.” He then worked under a registered architect before setting up his own shop in 1974 in Camden, where he has been ever since.

For the first decade of his career, Morris’s firm, which at one point had 12 employees, primarily designed multifamily housing. “We did projects literally from the top to the bottom of the state for developer clients,” he says. When the recession hit in the early 1980s, he switched gears and downsized to focus on custom residential design. “Actually the timing was great, because I’d really had it with multifamily housing after turning out a great deal of it,” Morris says. In 1994 he started a construction management arm of the firm, Morris Construction Services (MCS). “It was an opportunity to become a full-service organization that could solve a problem that always bugged me—not knowing what construction costs would be,” he says. “I feel very strongly that architects should really come to understand and appreciate what budgets are and what things cost. It makes us better architects, and it’s an attractive thing from a marketing standpoint as well.”

Combined, John Morris Architects and MCS have designed and built more than 25 projects valued at more than $30 million. One of Morris’s favorites is a shingle and stone home perched on a cliff overlooking Muscongus Bay in New Harbor. The site offered a challenge Morris often faces when building houses on the Maine coast: rocky ledge. “The ledge factor is hugely significant, and the logical approach is not to touch it but work around it and see what you can achieve,” says Morris. “Right now we have a house going up on Great Diamond Island, and it’s on a big hunk of ledge. So the first thing I wanted was a first-rate survey of that ledge, and what happened around it. The design of the house is driven by working with the fact of that ledge.”

In addition to topographical considerations such as an existing ledge, the homeowner’s lifestyle comes into play with any project, says Morris. “I think an awful lot of what I do is being a good listener and taking a measure of what I am hearing, not only in terms of the basics—three bedrooms, two-and-ahalf baths—but how the client lives. I look at every project and the costs involved with it as if it were my own. Would I spend X dollars to have thus and such, or is it going to be key to the success of the project? And if it is, how do I make it affordable for this particular client?” Even when budgets are generous, “you don’t want to be burying money in stuff that’s not important,” he says. “If there’s any sort of secret of success that we’ve found, it’s being attentive to the fact that people deserve and need some index of what they’re walking into, and it doesn’t mean that they’re going to spend less. In fact, if they have confidence because they’ve been given more information, they often end up spending more than they might otherwise have decided to.”

Having spent much of his career designing spectacular custom homes, Morris is currently working on a dream project at the other end of the housing spectrum. It has become a mission of sorts, as well as a design and construction challenge—to create attractive, energy-efficient homes at an affordable price. “I’m focused on something that could be done with enough opportunities for variation and ease of fabrication, and that would make it possible for people to get into a house for $160,000 or $180,000,” he says. While he mentions the tiny house movement as inspiration, the homes that Morris envisions will be about 1,200 square feet and will feel even larger because “every last square foot will be serving a purpose.” Aesthetics also play an important role, as do lifestyle and privacy considerations, given the reduced footprint. “I want people to be able to look at the ceiling and see natural wood instead of a bunch of drywall,” he says. “We’re looking for the right wall finishes that are going to delight, yet can also stand a tricycle running into them.”

Morris has assembled a small team that includes a retired modular housing manufacturer. Each of the members is working on their own time, and the group hopes to have a prototype within the year. “Right now we’re getting somewhere on our search for a beautiful wood exterior that doesn’t need to be treated,” he says. “We haven’t filled in all the boxes yet, but I’m feeling most encouraged that we’re going to be able to do it.”

Morris’s childhood mentor Jackson, and Jackson’s partners Sert and Gourley, were both admired and reviled for their design of the Peabody Terrace complex in Cambridge, built in 1964 as housing for married Harvard students. As Sert, who died in 1983, put it, “I’ve always been interested in architecture as an extension not only of technical problems, but also of human problems.” In this vein, Morris enjoys the challenges and satisfaction of designing for both ends of the economic spectrum. “I think we have our share of nicely done projects with delightful clients who want to do things just right, and have the wherewithal to do it,” he says. “But we’d also like to have the satisfaction of creating pleasing, affordable, and properly energy-efficient solutions for young working families. To that end, we’re working at ways to make this dream a reality.” 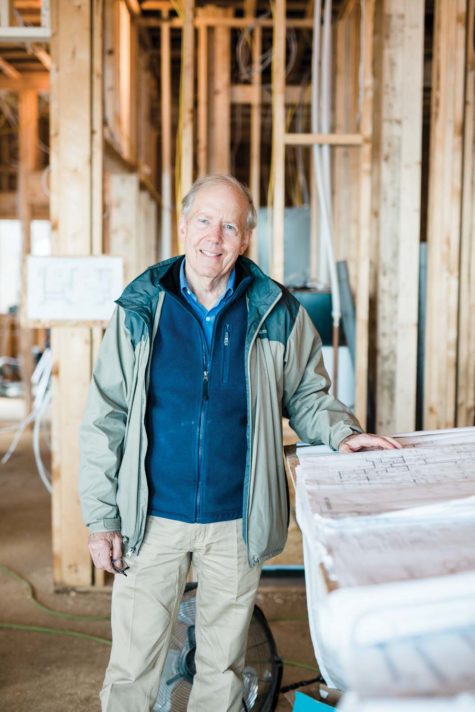 Morris, who opened his Camden office in 1974, has focused on custom home design for more than 30 years.