With its rich, deep tones, it's not surprising indigo blue has been coveted for millenia. 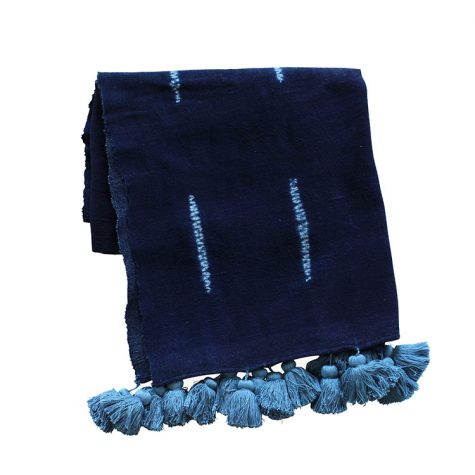 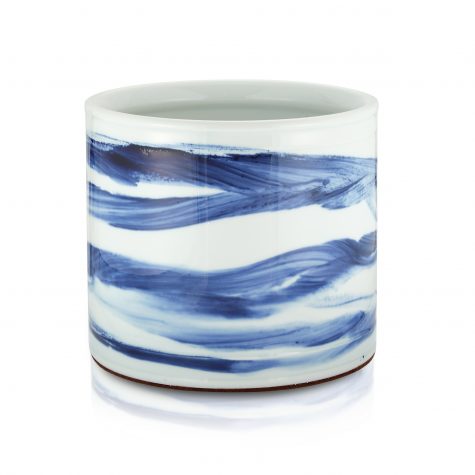 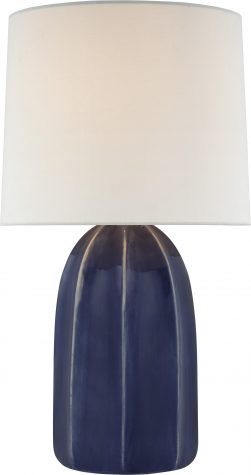 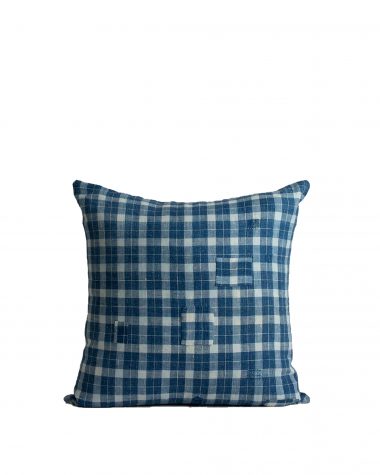 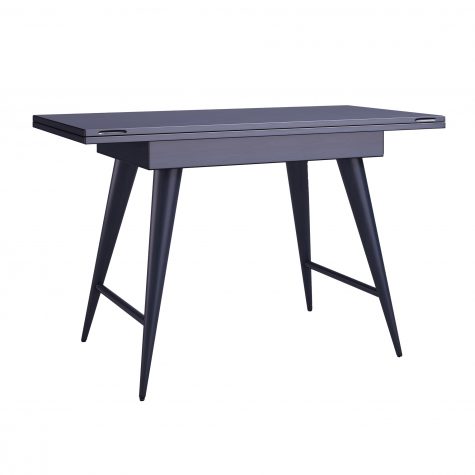 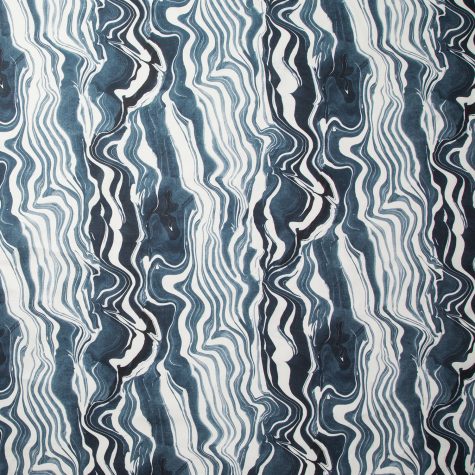 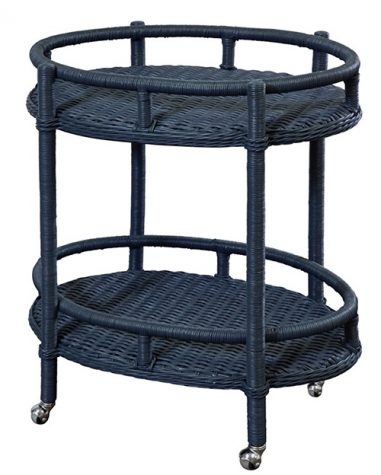 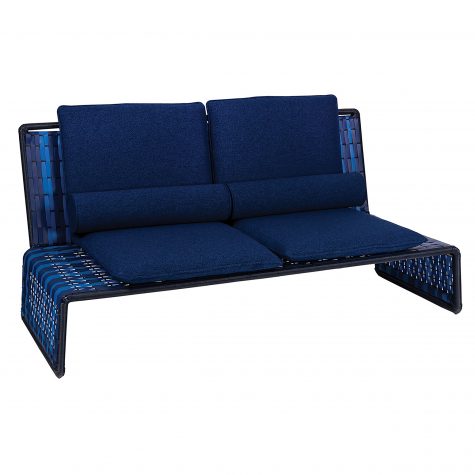 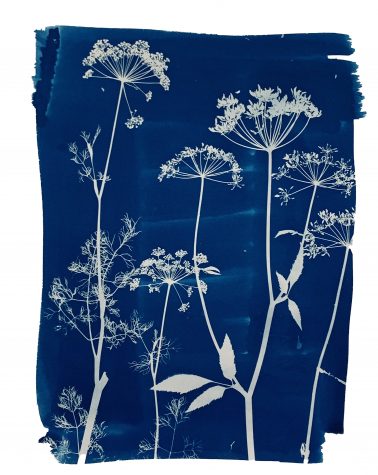 No matter where you put a pin on a map of the world, you’re likely to find indigo blue as part of the country’s visual culture. Indigo has been used to dye cloth from the Far East to the Andes. Recently the color has had a surge in popularity in home decor, particularly in the world of textiles.

Although only a few artisans still make true indigo dye, a process that requires years of training to master, the color name persists for this particular shade of deep, vibrant blue. More lively than navy but less bright than ultramarine, indigo blue is characterized by its richness and a hint of warmth in its undertones. “It’s such a deep blue, it radiates—it almost has a vibration,” says Catherine McKinley, the author of Indigo: In Search of the Color That Seduced the World.

Indigo is also a famously elusive shade. You likely remember learning the acronym ROYGBIV for the color spectrum of red, orange, yellow, green, blue, indigo, and violet—and you may have been puzzled as to exactly what indigo was. Your confusion was not unfounded: scientists now omit indigo from the spectrum because it is so difficult to differentiate it as a separate color from blue or violet. It’s that can’t-quite-be-defined quality that draws designers to indigo. “Blues are everywhere, especially in Maine,” says Amanda Pratt, founder of Salon Design and Amanda Pratt Design, based in Boston. “Indigo is a great example of a blue that is still unique and original.” Here are some ideas for how to weave this timeless color into your home.

Indigo blue is surprisingly versatile. “If you think of it as a blue jean, it’s going to work with everything else you have,” says Heidi Lachapelle, cofounder of Heidi Lachapelle Interiors in Portland. She hesitates to call the color a “neutral” because it is so vibrant; rather, she says it’s a chameleon-like hue.

Indigo is a dye used on cloth, so it is natural to seek out this hue in fabrics. These days you’ll find true indigo through high-end antiques dealers and a few select artisans (and you can expect to pay thousands for it), but synthetic indigos can be beautiful too. Look for deep, rich color, and explore patterns including mud cloth from Africa, shibori from Japan, or resist-dyed textiles from India.

Bring out its warmth.

While we normally think of blue as a cool tone, Pratt says, “There’s a lot of warmth and depth to indigo.” Pairing it with neutrals found in nature is one way to bring out this warmth. “Whether that comes from a cognac leather or white oak, those warm tones tend to balance indigo out really beautifully,” says Lachapelle.

When designing a more colorful room with indigo, look to the warm tones on the opposite side of the color wheel. However, instead of true oranges, think rust or ochre, suggests Lachapelle, who likes to use these colors in velvet. “There’s something about vintage indigo with rust velvet that is so beautiful. They have the same level of saturation and intensity, so they work really beautifully together.” Pratt agrees with the suggestion to pair indigo with orange-ish hues, saying it harmonizes well with oxblood or burnt orange.

Or play with analogous colors.

Lachapelle also likes to pair indigo with greens or eggplant purple, two colors that fall on either side of blue on the color wheel. “There’s something about indigo and those colors that feels really good,” she says. You might even include all three together for a cool-toned, three-color scheme.

Go all in with blue.

A room dressed completely in shades of blue is restful yet fresh. In a blue-on-blue room, use indigo as a pop of more vibrant, saturated color, says Pratt. For example, in a cafe Pratt designed, she used a pale blue on the walls and brought in a dark, indigo blue for the millwork.

A room painted entirely in indigo blue will be tricky to pull off, caution the designers we spoke to. Instead, look to wallpapers if you want to be enveloped in the hue. Lachapelle loves to use indigo-patterned wallpapers, especially in small rooms like a bathroom or entryway. If you’re craving a solid indigo wall, she suggests trying a grasscloth: “The texture will temper that intensity,” she says. When selecting a wallpaper, Pratt recommends taping it up on the wall where you will use it to see how the light hits it and how it will read in your home.

Pair it with cool whites.

“Indigo is so stunning that it needs very little competition,” explains Sue Wadden, director of color marketing for Sherwin-Williams. Wadden therefore recommends using indigo with whites. “Paired with crisp white, indigo can help create a traditional New England look or, in a flat finish with white-washed woods, a Scandinavian effect,” she says.

Try it in low-light spaces.

Indigo shines in cozy corners. Pratt says indigo is a natural for quiet, dim spaces like libraries and TV rooms. However, she cautions not to choose indigo as the dominant color in a room that gets a ton of light. “The warming effect of the sun changes the temperature of the room, so that all that will be felt is the intensity of the blue.”

Use it with restraint.

“I find that indigo blue is more effective in small doses,” says Lachapelle, who suggests its specialness is lost when used too liberally. A small dose could be a few throw pillows on a sofa, a piece of artwork that features the hue, or even a small space like a powder room.

People have used indigo blue dyes for centuries: the oldest known fabric dyed with indigo dates back 6,000 years. Extracted from the leaves of the Indigofera genus of plants, indigo was first produced on a large scale in India, but it became a cornerstone of trade in the rest of Asia, Africa, the Middle East, Europe, and eventually the Americas.

McKinley, the author of Indigo: In Search of the Color That Seduced the World, points out that indigo was valued because the color blue is rare in nature and because “in almost every religion, the color represents the heavens.” McKinley also notes that authentic indigo dyes are actually living things (a dye master must work to keep the bacteria in the fermented dye baths alive!), which has added to the color’s strong association with the spiritual.

During the Colonial period, enslaved Africans brought their knowledge of indigo cultivation to the United States and other colonies where Europeans had set up plantations. In the 1700s, indigo was a more valuable crop than sugar and cotton. In her book, McKinley notes that at the time of the American Revolution indigo cakes were used as currency (hence indigo’s nickname, “blue gold”) because the American dollar had no value.

In the late nineteenth century, synthetic indigo dye was invented and quickly adopted because of the laborious nature of producing plant-based indigo. Today only a few artisans are still making the traditional dye, and antique indigo textiles have become a popular collectible.

The original American flag was made from indigo-dyed fabric. 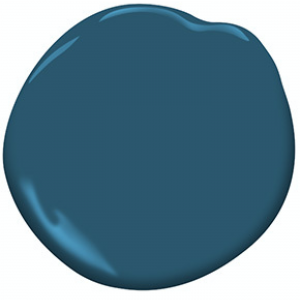 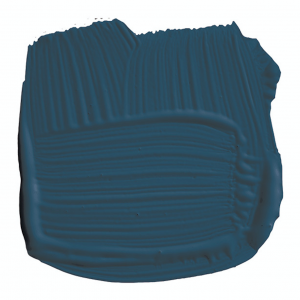 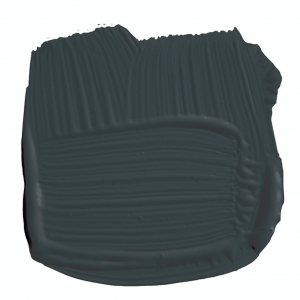 Farrow & Ball Railings
A deep, bold blue with a hint of green in the mix. 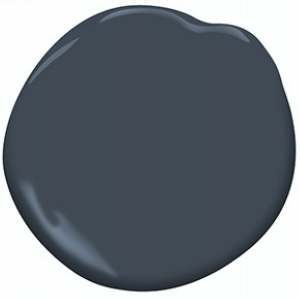 Benjamin Moore Hale Navy
Popular with decorators, this balanced navy goes with everything. 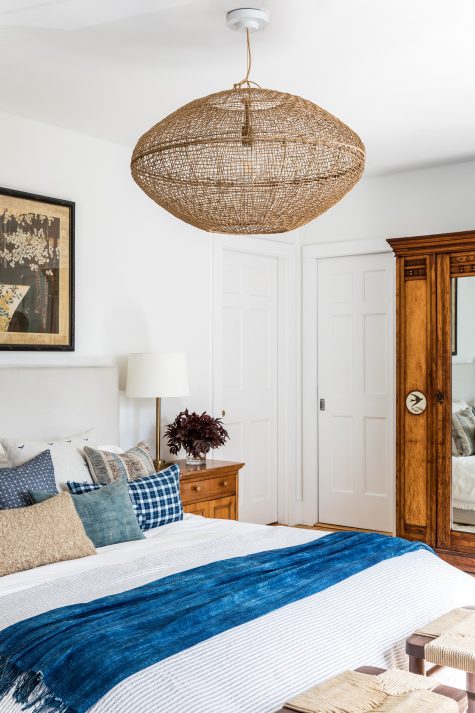 Heidi Lachapelle Interiors enlivened a neutral bedroom with a selection of indigo textiles, including pillows from their CAMP by HLI collection. 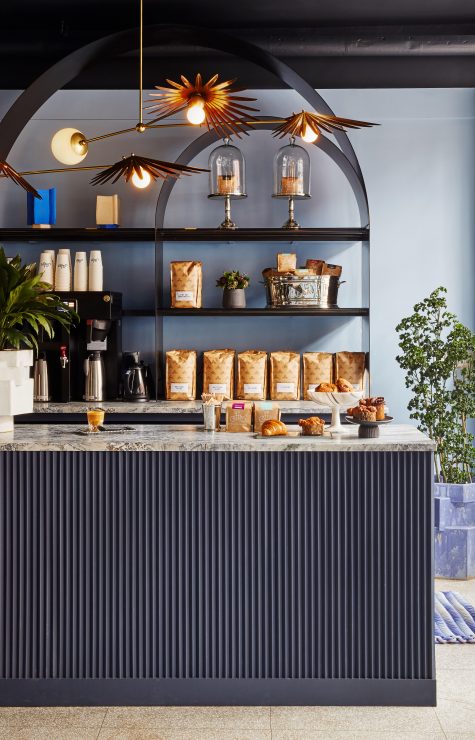 For a Boston café, Amanda Pratt used a range of blues from a pale, almost lilac blue to deep indigo. 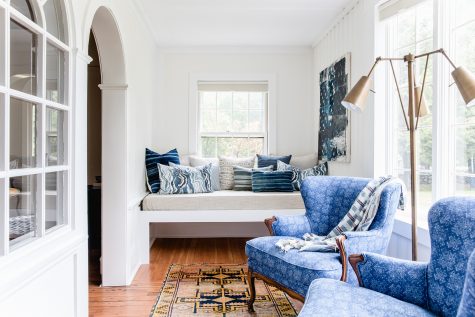 Lachapelle used a variety of indigo-hued pillows, including Rebecca Atwood’s Marbled Stripe pillows on a window seat. An indigo painting by Lachapelle’s husband, artist Louis-Pierre Lachapelle hangs to one side. 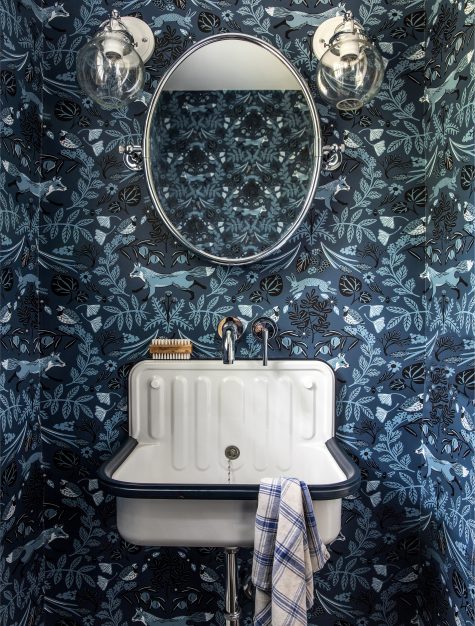