Up From the Ashes

A stunning modern lakeside home strikes just the right note, offering a creative escape as well as a lively entertaining space, while seamlessly blending into its surroundings 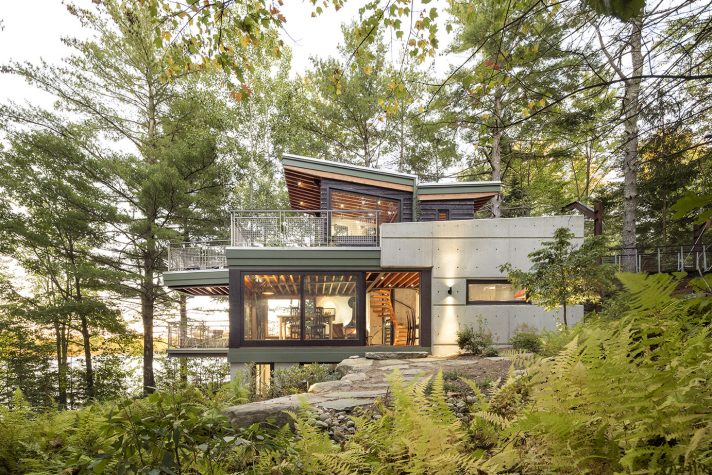 “We used materials—exposed concrete, steel, glass—that are not your everyday finished materials in a cottage in Maine,” says Winkelman Architecture’s Eric Sokol. “But we used them in a way that made the house warm, comfortable, and inviting—not a stark, cold statement. As this home heals into the landscape, it's just going to get better and better.” 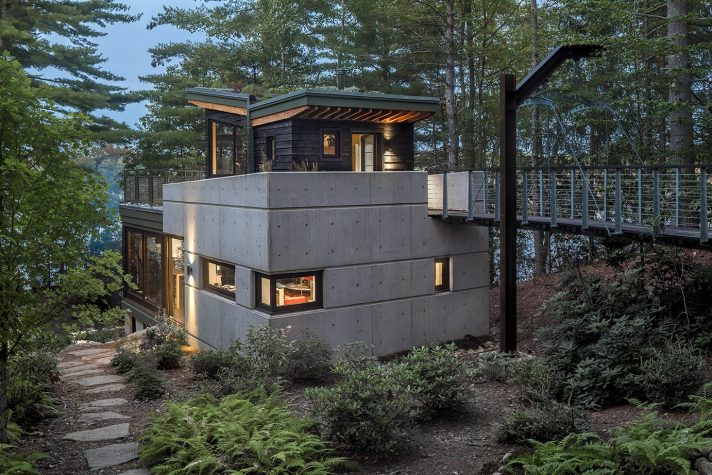 The partially exposed concrete foundation took nearly four months to build into the steep hillside. It required “a mountain of decision- making right at the beginning,” says Sokol. 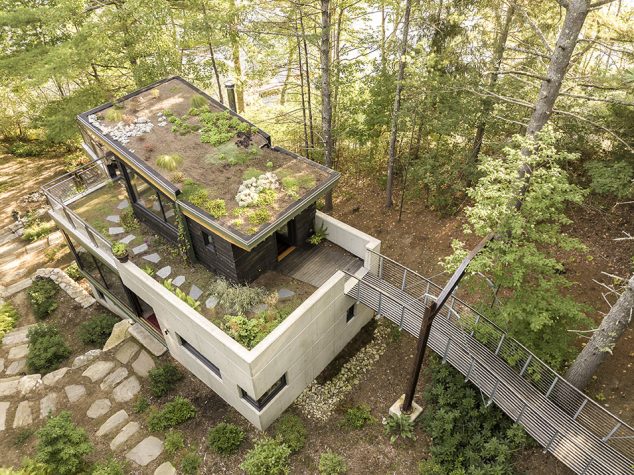 Sokol explains that the planted roofs help the home blend into its surroundings and mitigate runoff. “You're up in the tree tops, with these mature pines all around you and looking out at the water. It feels like you're floating in the trees.” 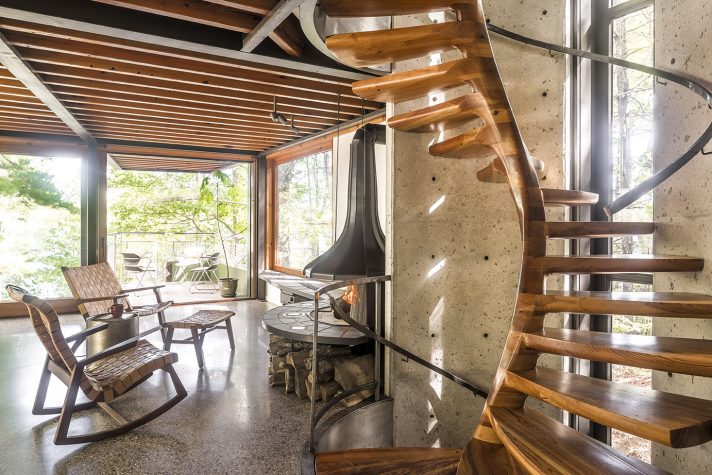 The second-floor living space has an airy, indoor-outdoor feel, thanks to plenty of large windows that look out on the surrounding landscape. The ceiling framing and stunning spiral staircase are both made of reclaimed heart pine timbers, which add warmth to the space. 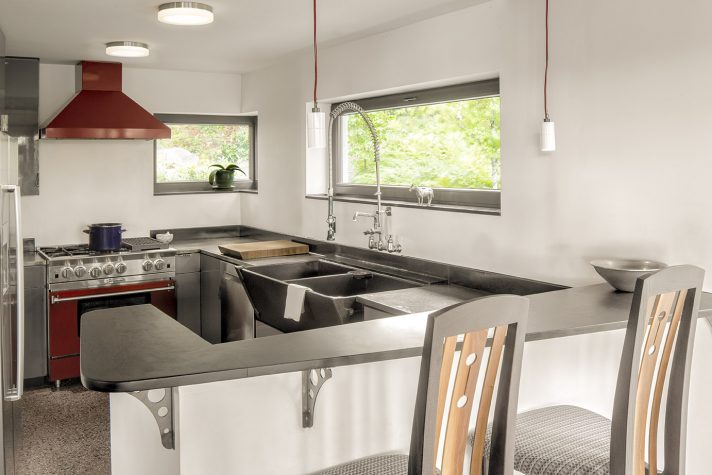 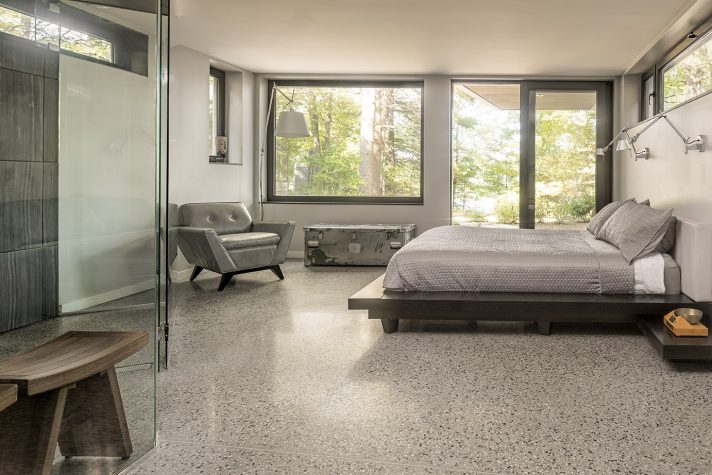 The nautilus shell, with its curved, spiraling shape and multiple internal chambers, symbolizes creation, movement, fluidity, and evolution. So it seems fitting that it pops up a few times in the home Tom West recently designed and built in Standish, with the help of Winkelman Architecture’s Eric Sokol and a handful of artisans and craftspeople.

West, a bit of a renaissance man, is a businessman and engineer by training and a designer and artist by inclination. He moved to Maine in 1999 and purchased two adjacent camps on picturesque Watchic Pond. One property—a roughly 630-square-foot single- story cabin—became his home, the other was converted into a studio. The owner of Limerick Machine Company in Limerick, he is also an inventor who holds a number of patents. He’s made several large-scale collaborative sculptures at Burning Man and recently designed a piece for a sci-fi movie set. He also races cars on the Sports Car Club of America circuit.

In fact, he was flying to Florida to compete in his first professional race in 2013 when he felt compelled to start sketching plans for the dream house he hoped to build one day. “When I’m flying is one of my most creative times,” he says. “I just couldn’t stop drawing, but the whole time, I’m thinking, ‘You’ve just decided to race cars, you don’t have any money to build a new house!’” But when he landed, he noticed his phone blowing up with messages and quickly discovered his house had burned down. Was he upset? “I have to admit that it never felt bad to me once,” he says now. “It was crazy, but that’s the way my life is, all the time. No wonder I couldn’t stop drawing!”

West is a huge fan of modern architecture, dating back to a childhood visit to Frank Lloyd Wright’s Fallingwater. Over the years, he would also flip through design and architecture magazines, gathering ideas. When it came time to finally build his new home, he chose to work with Winkelman Architecture, since he was already a fan of their work. “I showed up with my vision boards and my sketches, the general concept—but they definitely added their acumen to the project,” says West. “They really allowed it to come together, to pop.” As Sokol, the principal architect, explains, “Tom is a very unique guy, exceedingly creative and energetic. He’s almost hard to keep up with, but it’s awesome to work with him because he’s got this creative energy that just drives him forward. Right away, it was apparent that he wanted to do something different, and that was really exciting to us.”

When West started interviewing builders, however, he quickly realized that, given his vision and his budget, the only way he could make it work was if he acted as general contractor himself. “Our design team, which is usually architect, client, and builder, became architect and client–builder, which really streamlined everything,” says Sokol. “He knew exactly what he wanted and there were fewer decision points. He also owns a machine shop, so he had the means to do a lot of complicated steel fabrication, which saved time and money.”

One of the biggest challenges they faced was the site itself. “We had to work within the footprint of the previous home, on a long narrow lot that was only a little wider than the house—and it was steep,” recalls Sokol, noting that because of its lakeside location, they also had to follow shoreland zoning rules. “That limited both the location and the size of the home. But since it was just him living there it didn’t have to be a big sprawling structure. And we wanted the house to accommodate the landscape, not the reverse.” Ultimately, they agreed on a vertical solution: a roughly 1600-square-foot, three-story home, with an inverted layout.

The most ambitious part of the project? The exposed concrete foundation that makes up more than half of the house. Normally, as Sokol explains, building the forms and pouring the concrete takes just three or four days, but for this home, which is built into a hillside, it took three or four months. “When you’re doing exposed concrete it’s definitely harder, it’s an art,” he says. Because the concrete formed not just the foundation but also some walls of the home, everything had to be planned in advance—the location of bolts and fasteners, and, especially, anything that needed to be located within the exterior walls. “If you want a light fixture on the wall, you have to put the wire in that wall. You have to put in the electrical box—and there’s no changing it.”

Fortunately, West found a nearby mason who was up to the task: George E. Morrison. “You get one chance, and you hope everything is right,” says Sokol. “I think there was a day or two that was pretty tense. But it came out beautifully.” The lessons learned from the foundation carried over into the rest of the project. “The bulk of the structure is all visible, so we had to be exceedingly careful and deliberate about how it all went together, the concrete, the steel, and the wood timbers,” says Sokol. “Everything had to fit right and look good when it was done.”

When it came to the interior spaces of his dream home, the two driving factors for West were functionality and creating a space for entertaining. With that in mind, the home’s main entrance, which is accessed via a footbridge, is on the third floor—an indoor– outdoor entertaining space with a bar and fridge. The second floor includes a living room and kitchen (and another entrance), while the first floor contains the owner’s bedroom and features sliders that lead to a ground-level patio and the nearby lake. The second- and third-floor decks were designed to look as if they’re cantilevered, and the structure is topped off with a planted roof, which is part roof, part garden, part patio. When seen from above, it resembles ground cover, and is the perfect “softening” touch to finish off the property, says Sokol.

After all the steel, glass, and concrete outside, they shifted gears for the interiors, using a lot of reclaimed heart pine timbers— which are visible in the ceiling framing, as well as the central staircase—to ground the space and warm things up. The floors on the first two levels are polished concrete outfitted with radiant heating systems. On the second story, West added a large bronze nautilus pattern that is embossed into the floor. “It’s a common theme in my life,” he says. “It represents the whirl of life.” Stained white oak floors in the third-floor entertaining space add to the indoor–outdoor ambiance.

The home’s ultimate showpiece—and another nod to the nautilus theme—is the spiral pine staircase visible from every room in the house, which West designed with help from an artist he met at Burning Man, Nick Fournier. West wrestled with endless versions of the design before landing on the right one. “I was trying to get to a model where I could use the same identical piece, over and over again,” he says, explaining that Fournier—who travelled from Hawaii and spent the winter collaborating on the project—added the curves. The pair designed, cut, and installed the stairs in roughly a month, with the help of CNC machines and hand tools. “You don’t need to have all sorts of fancy stuff in the house,” says West. “You can make it beautiful by being perfectly practical, and that’s what it is.”

One of West’s other major contributions is the steel-and-oak suspension bridge leading to the main third-floor entrance, which was added to avoid having to use slippery outdoor stairs in the icy winter months. West treated white oak with iron sulfate, which stained it black, then wedged it together with steel pieces, in long, thin strips, along the length of the span. Originally, he planned to add radiant heating but discovered that he didn’t need it, because the snow falls right through the grates.

The final piece of the puzzle was the landscaping. West worked with Gnome Land- scapes, using repurposed granite for the stairs and strategically adding plants and trees to help blend the natural surroundings with the steel-and-concrete structure, tying it all together. “The idea is that the landscape will grow back in all around the house,” says Sokol, “and the house will be reabsorbed by the landscape.”

In the end, West couldn’t be happier with the results. “I wanted to build a place just for me. Even though it’s small, I’m able to host a nice gathering of people because I can open it up so much,” he says. “Every single room gets used every single day. It was built to be effi- cient…it’s perfectly practical.” He also raves about how the home looks like it’s part of nature, despite its modern geometric design. “It blends right in. You can’t see it from the lake. That was my goal,” he continues. “I love living there every day. It will never not be my house in Maine.” 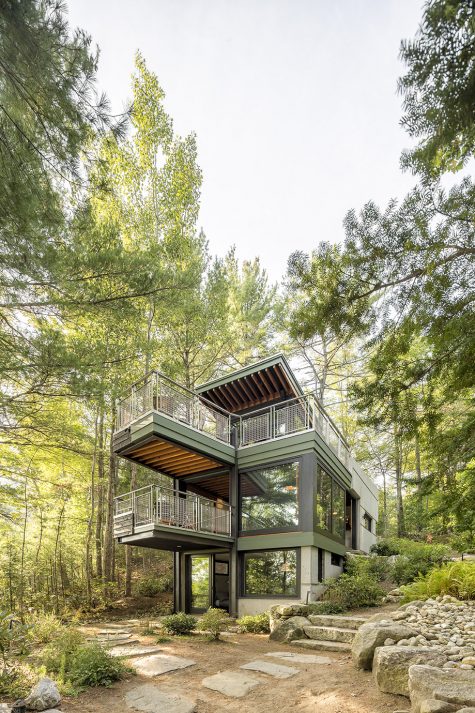 “A group of friends and I came up with the name ‘Whipplewood’ while watching the sunrise,” says West. “The house was getting close to being finished and it just sounded right.” 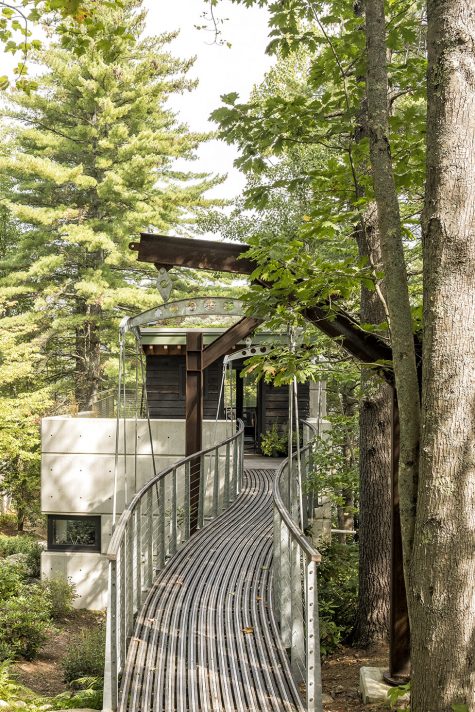 West, an engineer, designed and built the gracefully curved suspension bridge that leads from the parking area to the front door and third-floor entertaining space. 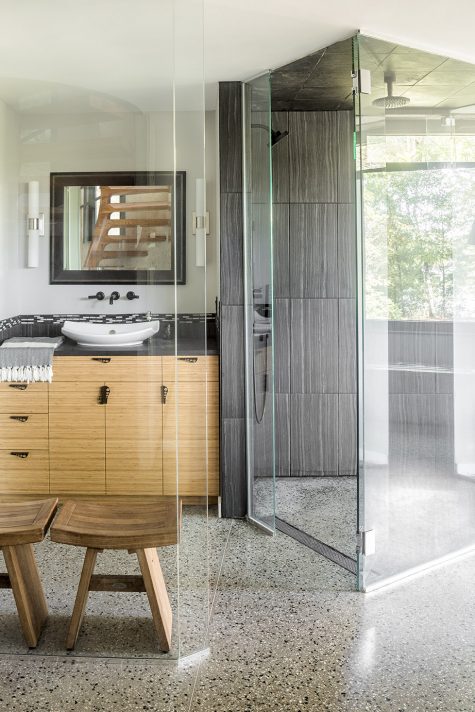 The bathroom features a shower enclosed with glass and polished concrete floors with radiant heat. 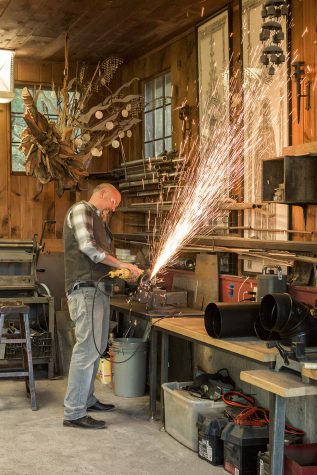 West, at work in his studio, which is located on an adjoining property. 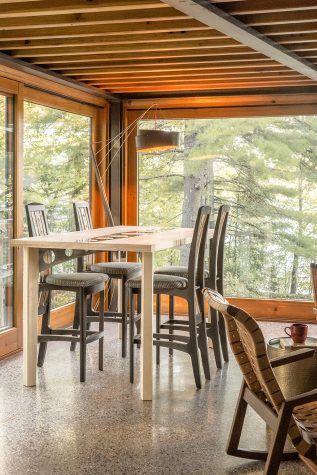 The dining table was built by West in his nearby studio.

West designed and built the home’s showpiece and focal point, the spiral pine staircase, with help from his friend and fellow artist, Nick Fournier. The sinuously sculptural piece takes up less room than traditional stairs, allowing West to maximize the living space in the home. 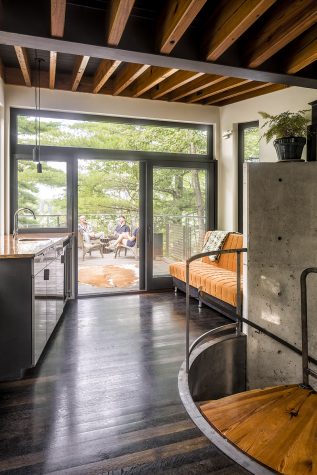 The third floor, which is outfitted with a wet bar, stained white oak floors, and large outdoor deck, is where West likes to entertain.