The Little House that Could 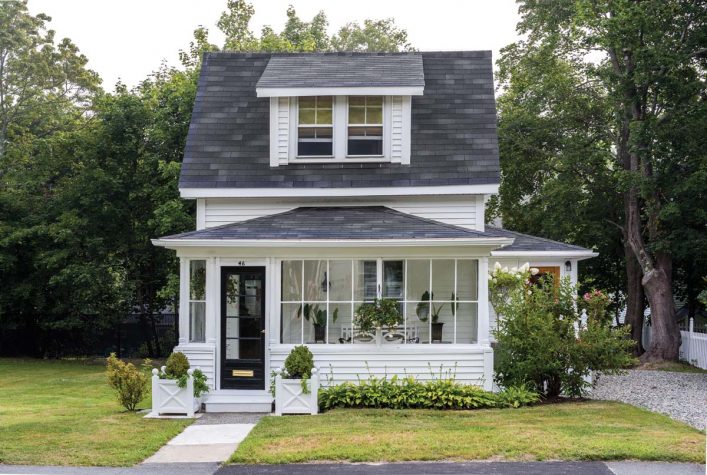 The exterior renovation of Betsy and Mark Stires’s home involved reframing the base of the porch, building a step to the front door, and reglazing the original porch windows. Betsy painted the door black and added a mail slot. The roof shingles and siding are original. 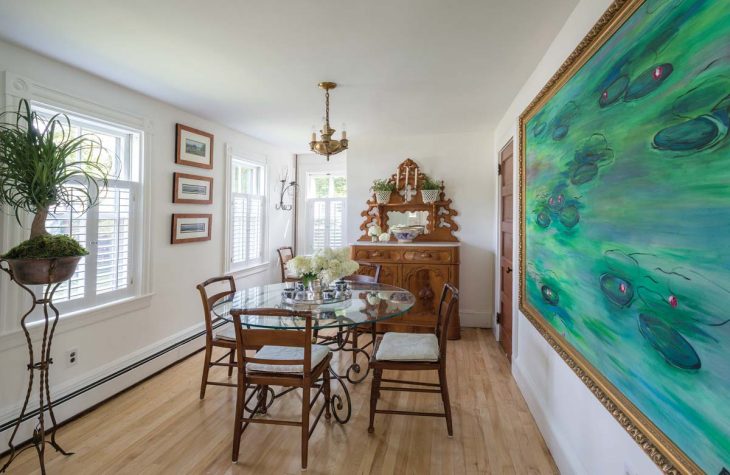 When Betsy and Mark pulled off the sheet vinyl on the dining room floor, they found this white oak. The oak breakfront has been in Mark’s family since the late 1800s, and the bronze pendant lamp is from Artisan Lamp in Washington, D.C. The Pierre Deux table of glass and wrought iron appealed to Betsy because of its transparency. The large painting, by Betsy, brings excitement to a room that might otherwise be “too still,” she says. 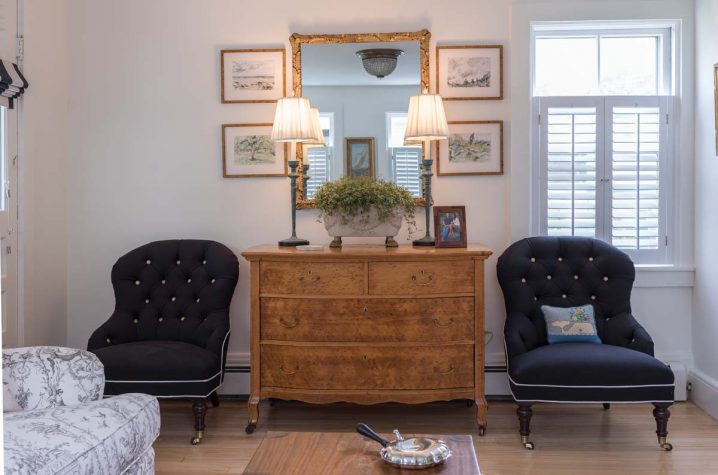 In the living room, an American Empire–style bird’s- eye maple dresser is paired with armchairs Betsy had recovered. The needlepoint pillow is by Mark’s mother. Betsy picked up the watercolor landscapes, which remind her of Maine, in Paris. 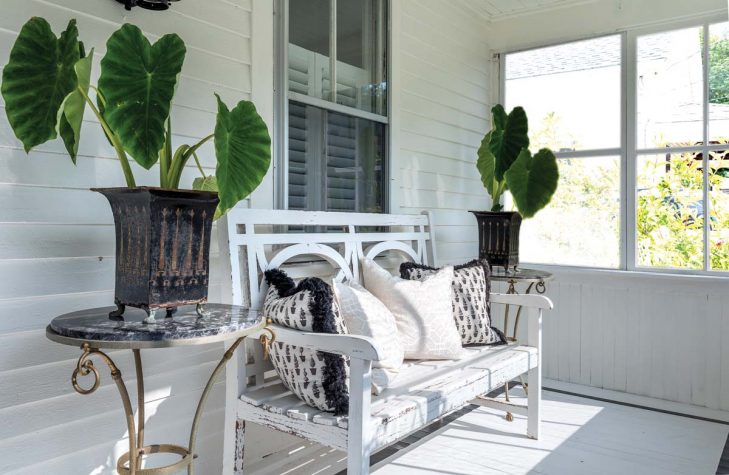 On the front porch, a Chippendale garden bench from British Traditions is flanked by vintage Edward Plyler Directoire stone-top tables. 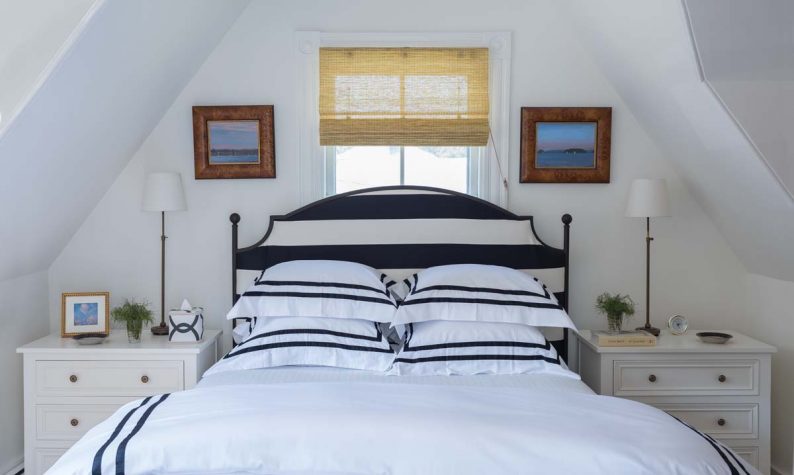 In the owners’ bedroom, bold black and white fabrics have the arresting effect of a Franz Kline painting. The headboard material is from J. Robert Scott, a luxury home furnishings manufacturer founded by Betsy’s aunt, and the linens are from BedHeaders Home, a Virginia shop owned by one of Betsy’s sisters. The side tables are from British Traditions in Missouri, and the paintings are by Eugene Quinn. 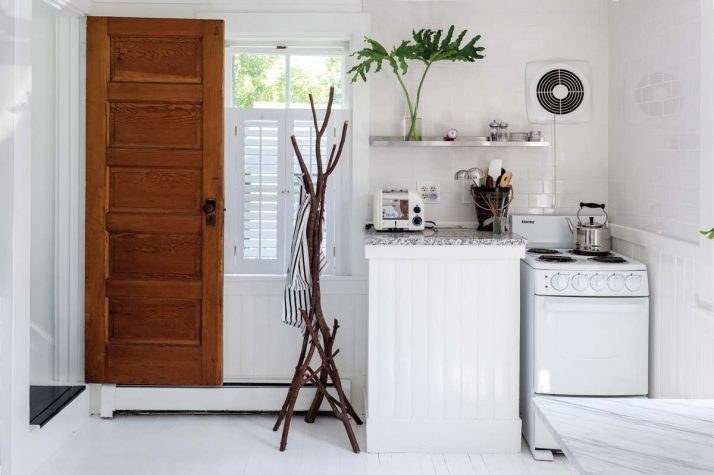 Betsy calls her tiny stove the “Easy-Bake Oven.” The adjacent countertop was once a chimney that extended to the ceiling. After a flood, the upper part was removed and the bottom was faced in beadboard. The coatrack, a nod to nature, was designed by Bucksport artist Wayne Hall. Betsy left the door as she found it because “it gives some graphic content and life” to the all-white room. 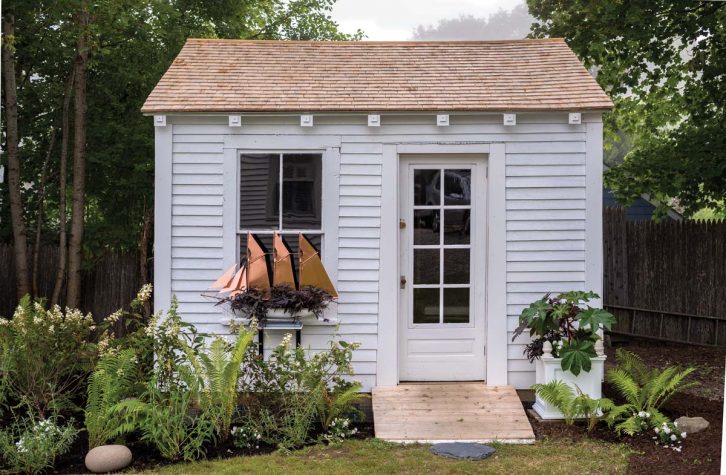 The Stireses originally thought they’d take down the badly damaged shed at the back of their property. Instead, with Franklin builder Joe Austin’s help, they worked tirelessly to fix the structure, redoing the foundation and adding cedar roof shakes. The door had been previously stored in the shed’s rafters. The sailboat window box and raised garden pot are from Bar Harbor’s Schooner Planters. Betsy wanted “a natural green and white loose landscape” around the entry.

After withstanding a fire and a flood, a Mount Desert Island home is reborn with some loving attention from a Virginia designer with strong Maine ties

2013 Hope Hill took her daughter and friends to Mount Desert Island (MDI) for a post-high-school-graduation celebration. It wasn’t an unusual destination for Hill. She and her siblings have been going to the island since they were children. Still, Hill didn’t normally go in June, and she was wondering what there might be to do then. A Web search led her to a listing for a designer showcase that MH+D and realtor Kim Swan of the Swan Agency/Sotheby’s International Realty were planning for that summer. For the project, various designers would be asked to outfit rooms in a home, both as a way to show off their talents and to benefit a philanthropic cause through ticket sales. (In this case, the beneficiary was Bar Harbor’s Jackson Laboratory.) Hill knew someone who would likely be interested in participating: her sister, Betsy Stires, owner of Frog Hill Designs in Alexandria, Virginia. She was coming to Maine in June, too.

Betsy was interested. And soon enough, she found herself driving unfamiliar back roads to avoid Bar Harbor traffic as she went to and from her parents’ MDI summer home to the showhouse location. On one of her trips, she noticed a house for sale. It was a small, early-twentieth-century, cottage-style house with an asphalt roof, single shed dormer, and enclosed front porch with period glass windows. Every day, she’d think about how much work the home seemed to need—how far up you’d have to leap from the front walk to the door of the slumping porch, as there was no step, or how dilapidated the back shed looked—and every day, she grew fonder of the place. “It got under my skin,” she says. As fate would have it, Swan—who was fast becoming a close friend—was the broker behind the agency listing the house. It would be nothing to ask for a showing. Betsy’s husband, Mark, came up from Virginia to see the MDI designer showcase, and months later, the couple owned the cottage.

Initially, Betsy and Mark supposed they might tear the place down and rebuild, perhaps making use of a neighboring lot they had also bought.

Still, they wanted time to make decisions, and finances were a concern. So they decided to focus on what they had: a seven-room house with a living room, dining room, kitchen, and tiny powder room downstairs and two bedrooms and a full bath upstairs. Stopgap measures came first. With the help of Todd Brophy of Northeast Harbor, Betsy and Mark plastered and painted the entire house. They repaired the kitchen ceiling and finished the maple floors: the ones already exposed and the ones that they found hidden under the dining room and kitchen laminate. The upstairs bathroom had a low ceiling and a clawfoot bathtub, which was raised high enough off the floor that it wouldn’t accommodate the Stireses’ six-foot-one son, so they expanded the project to include a custom bathroom. Master carpenter Joe Austin of Franklin added a new shower lined with subway tiles and with black and white tiles on its floor. Meanwhile, Brophy built a custom vanity around the existing sink’s pipes. Austin also reframed the front porch and added a step, and helped rehab the shed with a new cedar-shingle roof and a door with glass panes that they had found in the rafters. In general, Betsy says, the place “cleaned up very nicely.” With windows on all four sides, the house is bright even on dark days. By adding white indoor shutters on the lower part of the windows, she created a clerestory effect for the upper. To further brighten the rooms, Betsy used her favorite color—Benjamin Moore’s Simply White—on the majority of walls as well as on the kitchen floor and stairs, which are accented with a painted black “runner.”

The house, which was built in 1920, apparently had only two prior owners, although there had been renters over the years. On the day of the Stireses’ settlement, a man who had grown up in the house came to empty things out. He remembered that his parents had purchased the place because of its indoor plumbing. In 1947 the famous fire that burned over 17,000 acres of MDI had threatened the property. As the flames drew closer the man’s father told him to get a hose and water the house down. Did this save the structure? It’s not clear, but the blaze stopped just across the street.

Water, however, has not always been the house’s friend. Brophy had been on the job for three months when a small crack in a gasket in a toilet’s water feed sent 600 gallons of water gushing into the house after a snowstorm. He came in to work one morning to find the ceiling he had finished earlier in the week lying on the kitchen floor. “That was a bad day,” he deadpans. It was also a day that changed the scope of the project. Beyond needing a new ceiling, the kitchen needed rewiring where hidden wires had been revealed by the accident. The entire house had already been rewired; now these wires needed to be replaced as well. Of course, some misfortunes can become opportunities. Betsy decided to make the kitchen more functional by removing the upper part of a leaking chimney and facing the base with beadboard to create a much-needed countertop. She also added white subway tile and a new exhaust fan above the stove.

As appealing as the house is in its renovated state, the real charm is in Betsy’s design, which seems to be an outgrowth of her ebullient, warm-hearted personality. When she started thinking about the palette, she was inspired by the white shingles and black asphalt roofs of the homes around her. Against the cottage’s snowy interior, she layered on black and white toile sofas in the living room, a graphic, black-and-white-striped headboard and coordinating linens in the owners’ bedroom, and an inky button-tufted armchair with white piping in the front entry. Bold pops of color, such as a Monet-esque water lily painting by Betsy in the dining room and Christopher Schwartz’s Lichtenstein-like painting of superheroes embracing in the kitchen create “weight, balance, and excitement,” she says.

Antiques from Mark’s family reference the era in which the house was built. In the living room, these include a cherry blanket chest from an uncle who traveled the world in the 1930s and ’40s, as well as an American Empire style bird’s-eye maple dresser. The dining room has an 1874 marble-topped, Victorian oak breakfront. All three antiques are critical pieces given the house’s lack of storage space. (On the upstairs landing, the “linen closet” is a metal and glass cabinet.) Betsy also mixed in 1920s-era purchases, such as the bronze pendant lamp above the dining room table and the living room’s flame mahogany side table on which sits an American Empire–style alabaster lamp.

The house does not have “typical Maine vacation views, so I wanted to bring life in through artwork,” says Betsy. In addition to the water lilies and superheroes paintings, local landscapes, ranging from the vivid to the serene, hang on the walls, as do small prints of butterflies in the guest room as well as several framed images of buggies in the upstairs hallway, the latter nodding to the romance of the early twentieth century. With similar intent, Betsy had Ellsworth artist Cheri Cushman wallpaper the powder room with pages from an old book of Charles Dana Gibson illustrations, featuring his characteristic drawings of men and women in Victorian dress.

After the 2013 showcase, Betsy expanded her Frog Hill Designs to MDI, so now she and Mark have even more of a reason to return. “We find that when we wake up in that house we are so happy,” she says. When they are away, the place feels like “a little star in the distance,” beckoning them home. 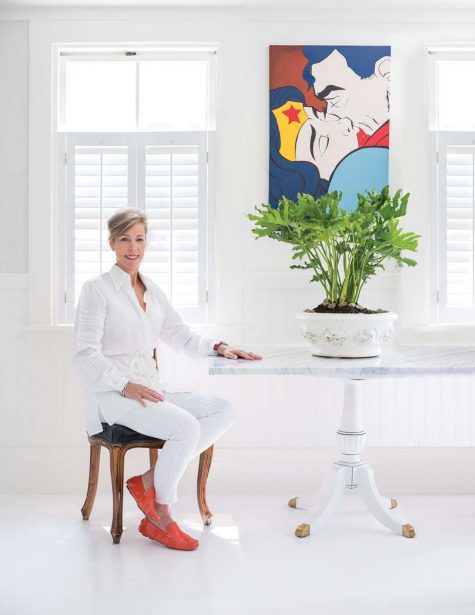 The designer sits in her kitchen, which is punctuated with a painting by Christopher Schwartz of Bar Harbor. She purchased the piece after seeing it in Bar Harbor’s the Independent Cafe because the imagery struck her as romantic, and because she liked the juxtaposition between the painting’s bright colors and the room’s white walls, floor, and furniture. 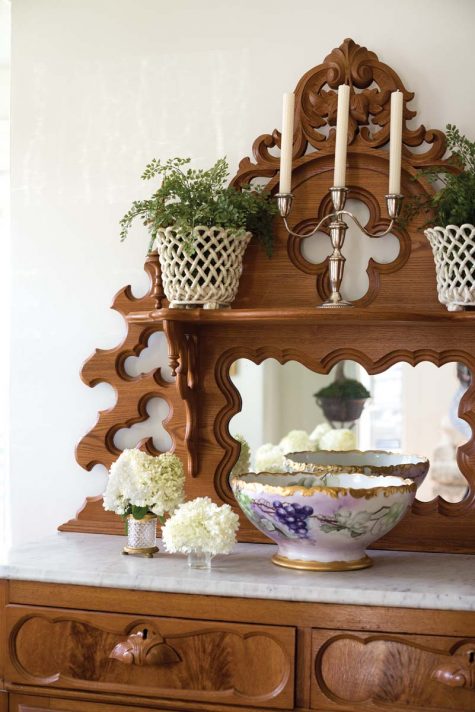 The dining room’s breakfront, which Mark’s family calls “the mable-top server,” is a useful piece in a house with little storage 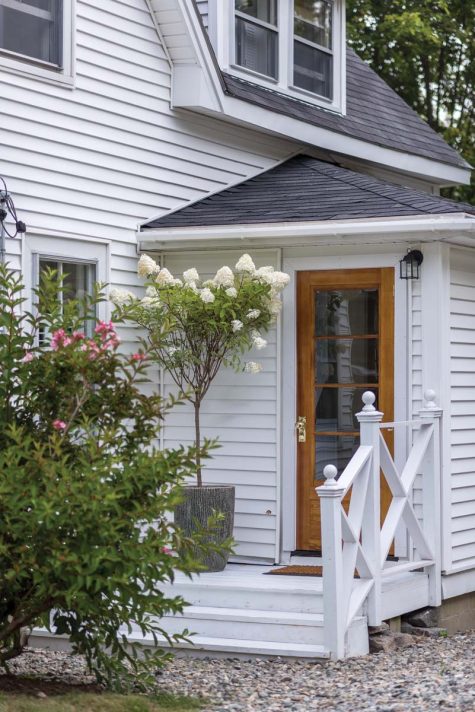 The Stireses replaced all of the home’s aluminum storm doors with wooden doors. This one was rescued from the rafters of the backyard shed, then sanded and coated with an oil-based clear sealant. 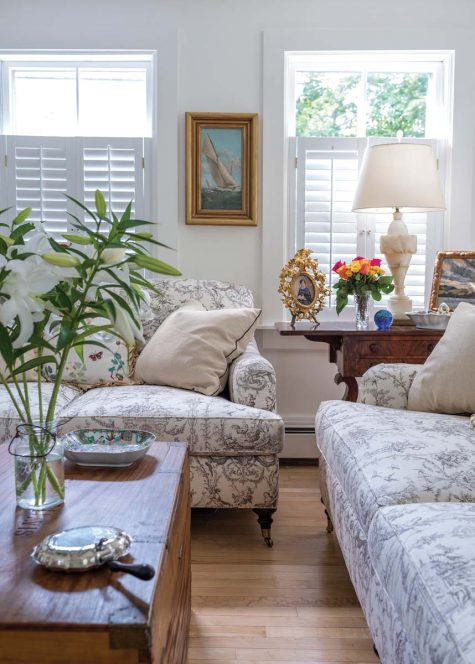 Shutters in the living room and throughout the first floor offer privacy and function as a “hardscape” for the house, says Betsy. She left the upper panes uncovered to suggest clerestory windows. The sofas covered in Robert Allen fabric were brought from the Stireses’ home in Virginia and topped with custom butterfly-print and ivory, Jacques Bouvet et Cie fabric pillows. An antique cherry blanket chest serves as a coffee table, and a sailboat print provides a pop of color by the alabaster lamp, which is sitting on a flame mahogany side table. 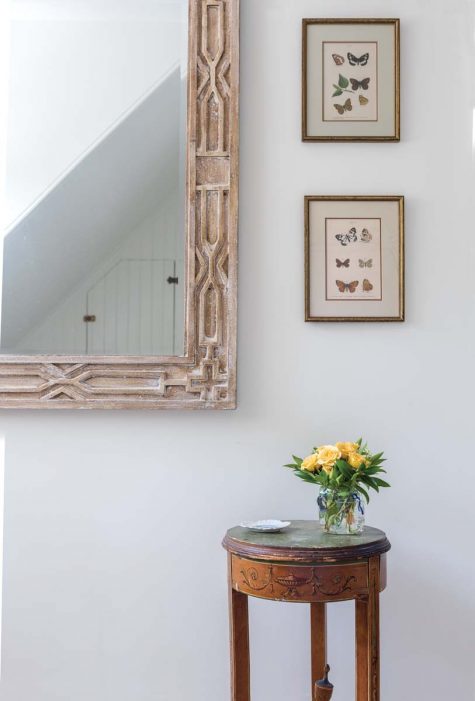 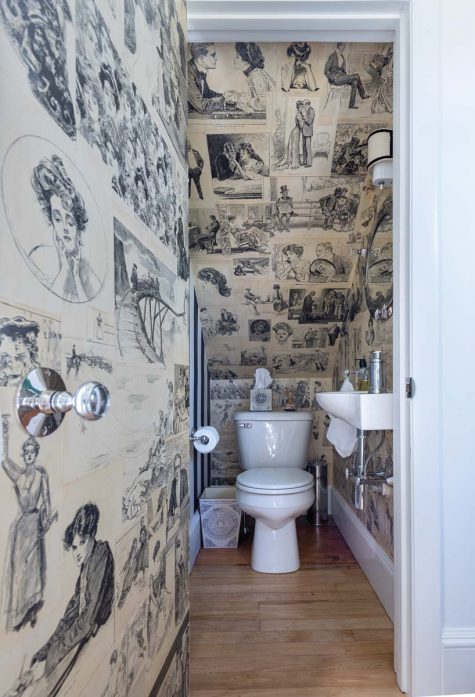 Cheri Cushman of Ellsworth wallpapered the powder room with pages from an old book of Charles Dana Gibson illustrations.