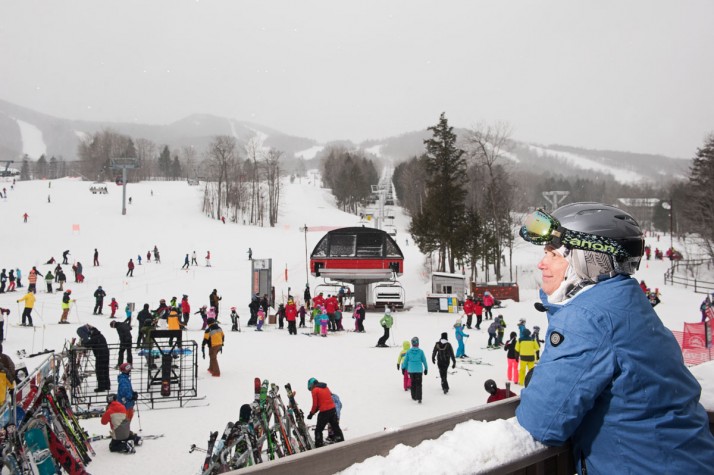  “Sunday River is open to everybody,” says Gretchen Kruysman (pictured). “You don’t get the sense that, if you don’t live there, you don’t belong.” For Kruysman and her family, the mountain resort is a place where they can come together for fresh air and quality time. 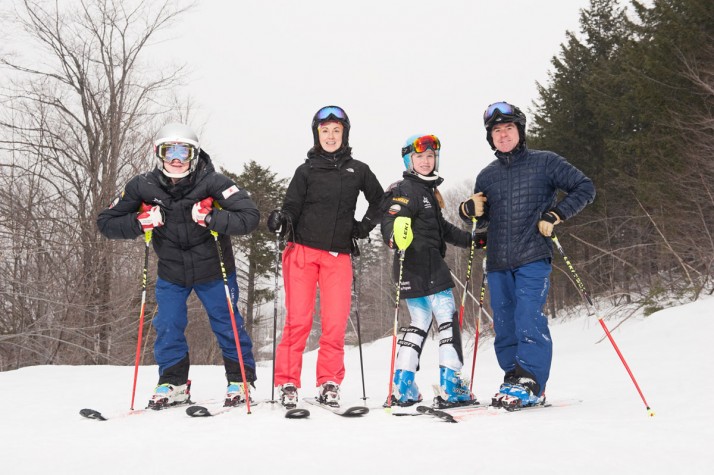 Janice and Dan Gray pose with their two children, Caraline and Andrew. 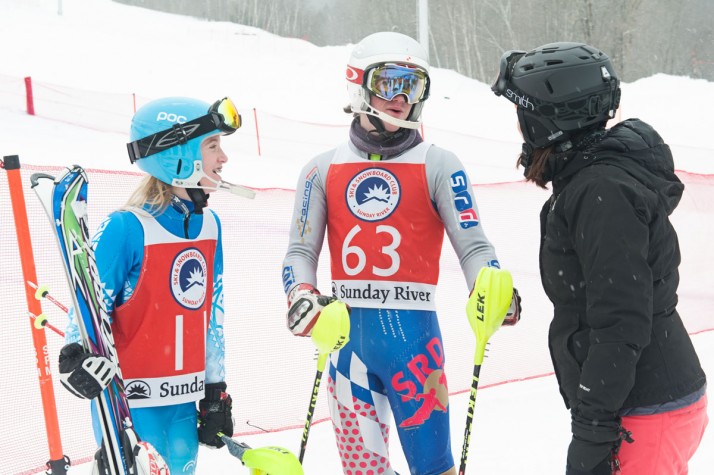 Both Gray children attend Gould Academy during the winter months and ski competitively on the Alpine race team. “Being part of the race community, you meet a lot of families and build strong relationships,” says Dan Gray. 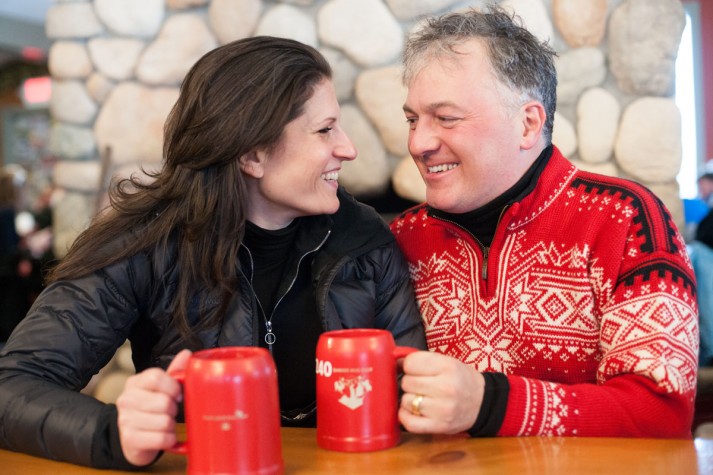 Katie and Phil Getchell make the drive from Boston to their cozy second home in Bethel almost every weekend in the winter. The decision to buy property there was an easy one: “Of course there are places to ski closer to Boston,” says Katie. “But we knew we had to be in Maine.” 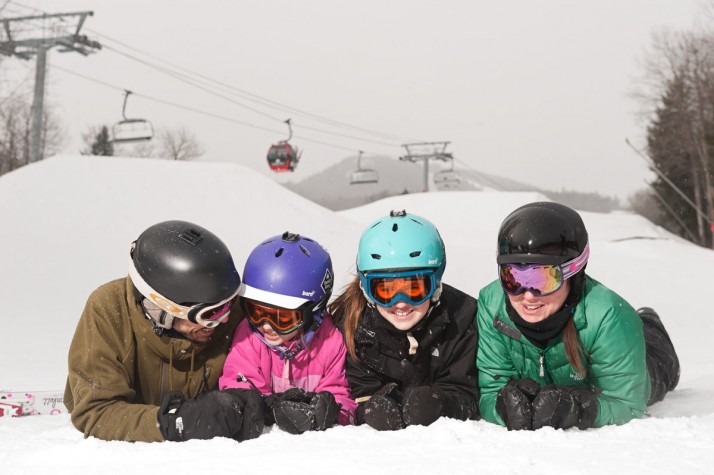 The Scola family poses for a portrait on the mountain. 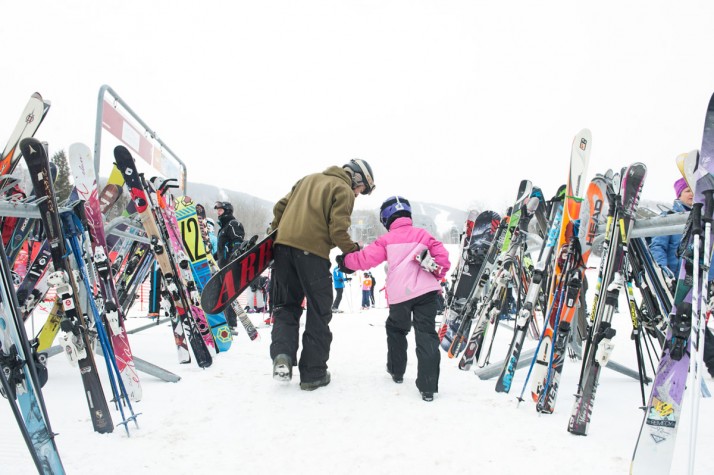 Sophia says her favorite season is winter. “The girls look forward to the first snowfall,” says Thomas. The moment they see flakes fall, they clamor for their parents to pack up the car. 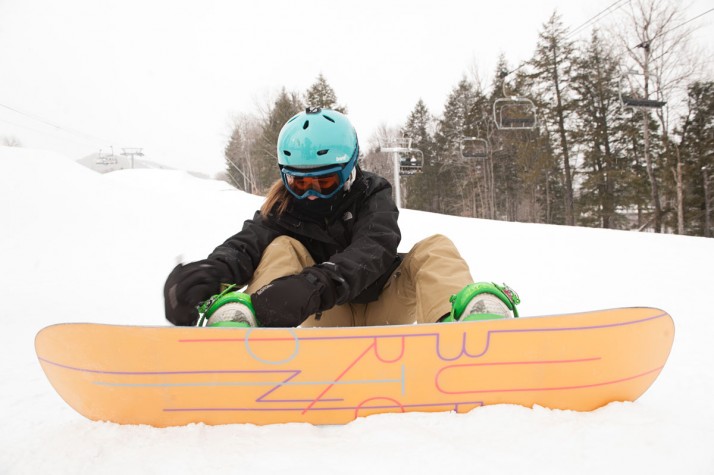 “Snowboarding has become such a huge part of her identity,” says Sarah Scola of her 14-year-old daughter, Olivia. 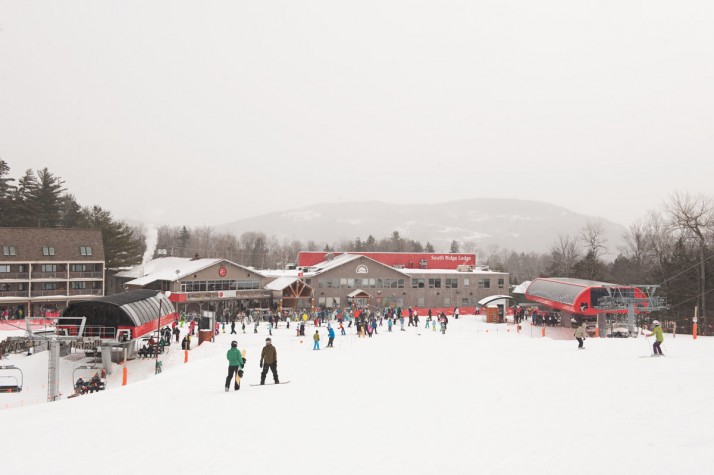 A busy day in winter means the grounds are teaming with kids, parents, grandparents, and young couples.

They say there’s no place like home, but these four families have found a place that feels even better: Sunday River

There are the places that you visit once and remember always- the summer you went to Spain, or that time you backpacked through California. Those places, lovely though they may be, exist in your rearview mirror. Then, there’s the other kind of place. It’s not home, exactly. But when you find this place, the piece of land that makes your heart feel full and your head feel at peace, something different happens. You can’t let go. You keep it with you. You return, year after year, until it has become a part of your interior landscape. And when you’re there, you see the world through rose-tinted goggles—bright and happy and true.

Sunday River is such a place.

On a clear Saturday in March, the mountain is covered with skiers of all ages. Toddlers wobble on their first sets of skis. Teenagers glide by with grace and ease, temporarily freed of their age-inflicted awkwardness. Middle-aged men with snow in their beards rip down the mountain like they’re 20 years old, and women with gray hair laugh with their heads thrown back, loud and carefree. Some may be on vacation, but the lucky ones wouldn’t call it that.

“It feels like home here,” says Janice Gray, who has been coming to Sunday River with her husband, Dan, for the past 20 years. While the Grays live and work in Massachusetts, the couple has owned a ski house at Sunday River since the late 1990s. In the winter, they spend every weekend driving north to visit their two teenage kids, Caraline and Andrew, at Gould Academy, where they attend school and compete on the Alpine race team. If pressed, Dan admits he prefers the world of Sunday River to his everyday routine in North Reading- and not just because he loves the slopes. “In life, you can have a list of people you know, and a list of people you like,” he says. “Those lists can often be pretty different. But up here, your list can be the same.”

Janice adds, “We’ve found a community where we can all trust one another. We watch each other’s children. We’re friends and neighbors, even though we don’t live here.” For them, Sunday River isn’t just a vacation spot. It’s where Dan proposed (on a trail named Obsession) and where their kids are learning to be responsible young adults. “The beauty of this place is that you can do everything as a family, from riding the lifts to skiing the trails,” Dan says. “And when you’re not together, you know someone else will keep an eye on your kid. My son can’t do anything without us finding out about it. He’s a good kid, but all 15-year-old boys can get in trouble,” he laughs.

Although Phil Getchell isn’t a parent himself, he has also noticed the freedom with which kids roam the mountain. “There are kids of a certain age that know the mountain so well that their parents can just give them lunch money and be sure they will come back,” says Phil. “They know where the trails are—even the ones that aren’t marked. I’ll see them ducking into a back trail and I’ll think: I’ve been coming here since high school! How did I not know about that?”

While he may not know every single nook and cranny of Sunday River—it’s a big mountain, after all—Phil and his wife, Katie, are both well acquainted with the characters that return year after year to ski. “You wind up knowing everybody,” says Katie. “It’s friendly in a small-town way that Boston isn’t. We know all our neighbors here.” Deputy director at the Museum of Fine Arts in Boston, Katie rarely works less than 50 hours a week. Their cozy home in Bethel provides the perfect escape from the buzz of city life. “Being up here gives me balance,” she says.

“In the car, I will often work on the way up,” she says as she sips a cup of tea. Their dog, Sasha, is curled up on the couch next to her husband. The walls of their living room are covered with vintage ski posters and various pieces of family paraphernalia, including the bar sign from their wedding 21 years ago. “The moment I get here, something in my head clicks and my brain goes into a different state.” Phil picks up on this train of thought: “It’s a geographical break. Even Sasha behaves differently up here—it’s like night and day.”

Even for couples who don’t own property in the area, Sunday River can feel like a home away. Cape Elizabeth–based couple Jeff Johnson and Gretchen Kruysman use the Grand Summit Hotel as their home base when skiing at Sunday River with their newly blended family. After Jeff proposed in 2013, they had to figure out how to introduce their five children to their soon-to-be stepsiblings (Jeff has three college-age kids, and Gretchen has two children in their 20s). Fortunately, they got along famously. “Our kids love each other,” Gretchen enthuses. “But it can be hard to get everyone together. We all love to ski, so we try to meet at the mountain.” But with kids on opposite coasts, they have to “arrange everything by text message.”

When they do get the whole group to the mountain, they split their time among skiing, visiting the hotel hot tub at night, and dining out. “Skiing is something that we can all enjoy together, much like biking or sailing,” says Jeff. “I can’t imagine many things you can do all day long with teenagers,” adds Gretchen. “We have such quality conversations on the chair lift; it’s a great way to get your kids to talk to you.” While both Gretchen and Jeff have been skiing for years, she has a slight edge. Jeff loves trying to keep up with his fiancée. “She’s better than some of the kids,” he says. “She’s a bit ahead of me, but I’m happy to keep chasing her.”

Sarah and Thomas Scola also spend their weekends chasing loved ones around the mountain, but in the case of this young married couple, it’s their two girls who occasionally leave them in sprays of powder. Olivia, their 14-year-old snowboarder, is particularly in love with the sport. “Snowboarding has become such a huge part of her identity,” Sarah says. “I love to snowboard, too. I think it’s in our blood at this point.” Thomas chuckles before adding, “I think you’ve only taken off two seasons in your life, right? Both when you were pregnant?” Sarah nods, and Olivia chimes in: “We were on boards before we were born.”

Olivia’s younger sister, Sophia, sits on the floor in a pink glittery tutu. She is shier than Olivia, but no less enthusiastic about their weekend trips to the mountain. “The girls look forward to the first snowfall,” says Thomas. “The moment they see flakes falling, they start shouting for us and asking when we can pack up the car.” The drive from Portland to Sunday River is short enough that it has become a snow day tradition—and watching the news for closure notices has become Olivia’s pre-snow-day ritual.

That’s not the only tradition they have instituted in recent years. “We have started spending our New Year’s at Sunday River,” says Thomas. “We want to build family traditions that we can pass down, something that the girls will always remember.” Someday, he hopes, they’ll be able to ring in a new year with Sophia, Olivia, and their grandchildren. But for now, the Scolas are happy just to have a place where they can challenge themselves alongside their kids. “We can all grow and learn together,” says Sarah. “That’s pretty special. And the girls get a chance to make their own decisions.” Snowboarding, she says, has improved Olivia’s confidence and social skills. Like Janice and Dan Gray, Sarah and Thomas feel comfortable letting their kids roam free and explore on their own.

“Sunday River just has its own, very special vibe,” says Jeff Johnson, summarizing perfectly what these devoted skiers and snowboarders all know. “You get busloads of people from Boston. You get people from Maine and kids from Gould. You see retirees and little kids. It’s truly every man’s mountain.” And, as Olivia and Sophia might add, it’s also every woman’s and every girl’s. It’s a mountain that belongs to anyone who dares to love it—and anyone loyal enough to return year after year. 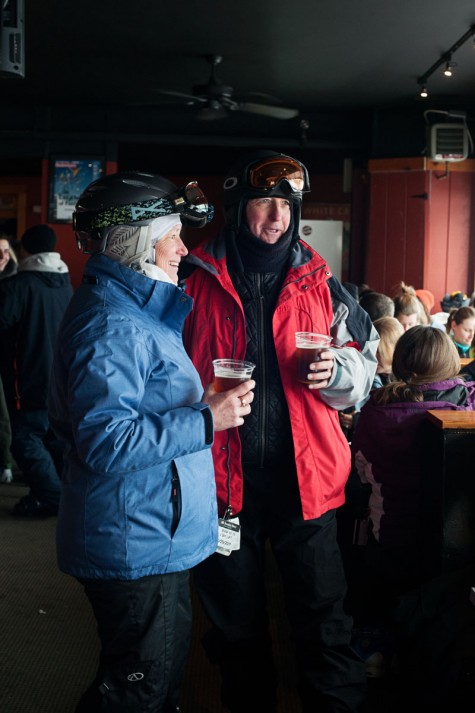 Johnson and Kruysman unwind after a day on the slopes. 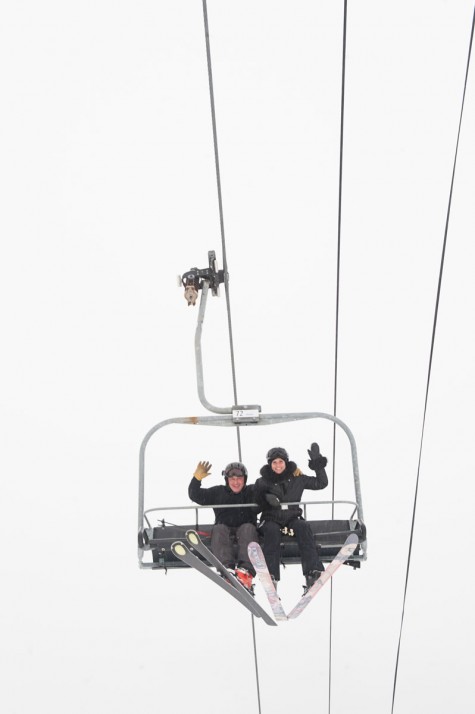 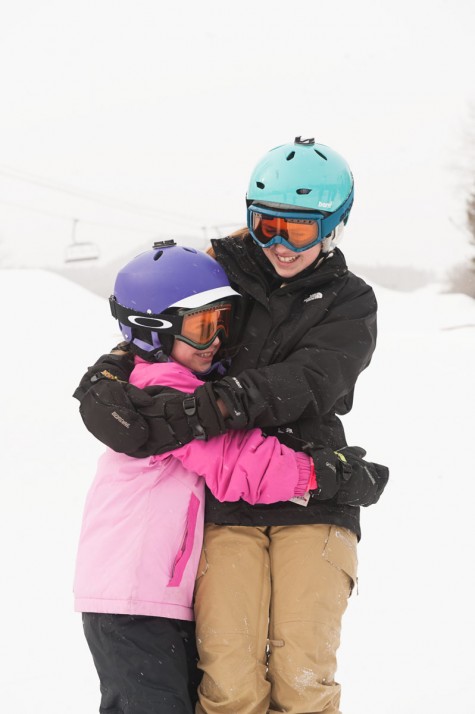 Sarah and Thomas Scola feel that winter sports have helped their two daughters, Sophia and Olivia, find confidence and maturity.