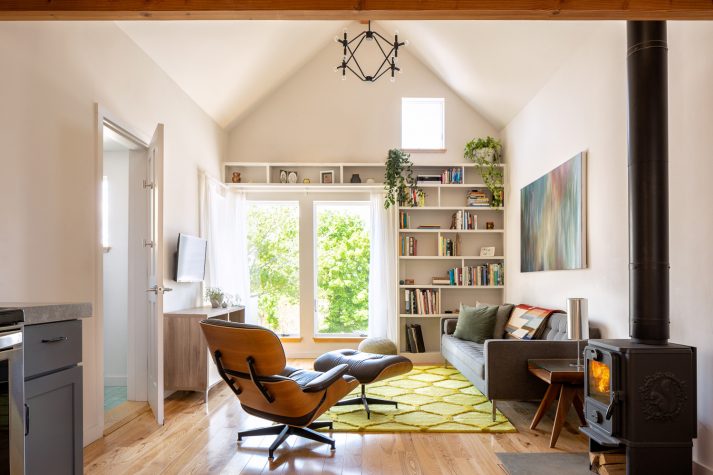 In the living room, Grannis’s own painting hangs above the sofa. Lehnen made the side table by hand. The Eames lounge chair and ottoman sit atop an Amy Adams area rug. 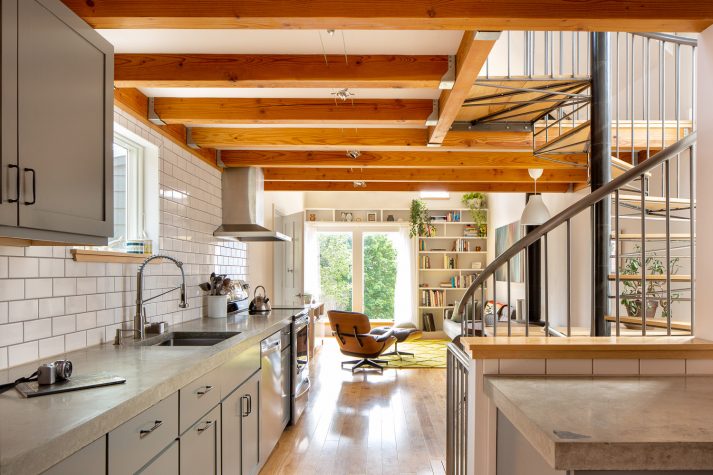 The kitchen features poured-in-place countertops and cabinetry from Wisconsin-based Holiday Kitchens. To deal with the low ceiling, Lehnen threaded cables between the rafters and clipped high-tech lighting onto them. 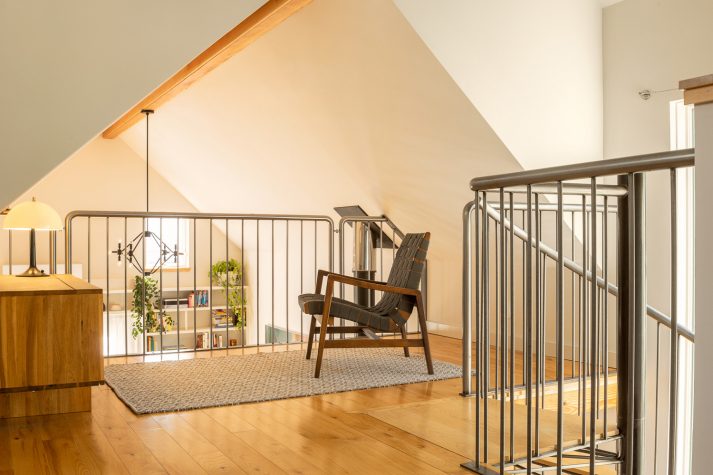 The stair culminates between a sitting room overlooking the living area and the bedroom.

In 2013, when Alex Lehnen, who is now a principal at Winkelman Architecture, purchased a house in the Bayside area of Portland with artist Joy Grannis, he says, “The small house movement was taking off, but the compact category was a more reasonable size to target.” (“Small houses” are defined as under 1,000 square feet, while “compact houses” are just a bit larger.)

This quaint street had been part of an Italian immigrant neighborhood, and the ground floor of the circa-1800s gabled structure had accommodated a hair salon for local denizens. On one side, a former owner had tacked on a shed-roofed addition to build a bathroom and another room off the back that remained unfinished. In total, the whole thing measured 1,000 square feet and housed, at one time, a family of eight.

“The potentially naive calculation I made was that, even if we found terrible stuff as we renovated, it wouldn’t take much to fix because it was so small,” Lehnen says. Because they were in their late 20s, they also felt they were young and energetic enough to do it themselves with help from friends. Rebuilding the foundation and repointing its bricks, however, would require heavy equipment. “We hired an excavator to dig the back foundation. But because the lot is so tight, only the smallest excavator fit, and it immediately broke. So we had to hand-shovel the foundation out ourselves.”

There were other unforeseen issues too. “We thought we could live in it, work full-time, and entirely build and renovate it,” adds Lehnen. But the reality of migrating from one partitioned section of the house to another as construction was being done, the chaotic and dusty fallout of the work, and the need to clean it all up at the end of the day so they could prepare dinner on a hotplate was far more challenging than anticipated. Lehnen and Grannis also lived there without heat in the winter, something that made working with the recycled polyiso insulation a nightmare. It had to be cut to measure, then spray-foamed into place. “It was really tedious, cold, and messy, and the sound of cutting it was awful,” remembers Grannis.

To save money, the two used salvaged materials, many from the construction firm where Lehnen worked at the time. A large window now in the stairwell, for instance, was mistakenly ordered for another of the company’s projects, so Lehnen snapped it up. A front window came from a renovation in Yarmouth.

Because the space was small, barely 12 feet across and 40 feet long, says Lehnen, “We made everything as loft-like as possible.” To the left upon entering is a screen of widely spaced horizontal wood slats that creates a sense of entry without blocking light. To the right is the back room, which serves as home office and music room (Lehnen plays guitar). It can be closed off with a pocket door. On the entry side of this western red cedar dividing wall is a pantry that services the kitchen to the left, while on the other side, inside the office, an identically proportioned space accommodates a closet.

There are other examples of this space-conscious, double-duty cabinetry throughout the house. At the top of the spiral staircase that leads to the loft bedroom, for instance, a low bookcase also becomes the privacy wall that obscures the bed from view. Built-in bookcases frame the double windows at the front of the house but also increase storage capacity.

Throughout are ash floors that, says Lehnen, “take advantage of the emerald ash borer problem,” the beetle that has killed hundreds of millions of ash trees in North America since it was first detected in 2002.

Beyond the wood-slat screen at the entry is the kitchen and, closest to the street, a living/dining area with double-height ceilings that disguise its modest size. The kitchen countertops are poured-in-place concrete for easy maintenance and a contemporary vibe. The bedroom sits above the kitchen, which means the ceiling here is fairly low. That made finding attractive lighting that didn’t hang down too far a challenge. Lehnen implemented an ingenious solution that also happens to look fantastic. He drilled perfect holes into identical locations on each floor joist and threaded them with industrial cable, then clipped the low-voltage fixtures onto them. Each lamp, then, lives within the space between joists rather than dangling beneath them.

One of the elements that wasn’t salvaged or bought off the rack is the spiral staircase, which also functions visually as the focal point of the house. Given its prominence in the space, says Lehnen, “Turnkey options available online just didn’t feel right.” Instead, he had William Bruce of Tunnelwerks International fabricate the steel frame and balustrade.

Many of the furnishings came from another of Lehnen’s previous jobs, this one managing a furniture store in Portland, Addo Novo, which has since closed. The mix is classic modern juxtaposed with contemporary. In the former camp are an iconic Charles and Ray Eames lounge chair and ottoman, first released by Herman Miller in 1956; molded plastic side chairs by the Eameses for the firm, introduced in 1948; and Jens Risom’s lounge chair made for Knoll out of woven parachute webbing stretched over a walnut frame (originally released in 1943).

Contemporary pieces include a bed from Portugal-based De La Espada and a rug by Patricia Urquiola for the Spanish firm Gandia Blasco. Grannis and Lehnen’s mothers are both artists, and many of the artworks are original, including Grannis’s large abstraction above the living room sofa. For curtains, they chose white ripstop nylon, a material more commonly deployed for sails, tents, flags, and sleeping bags. It might seem a puzzling choice until Lehnen pulls it across the front window. Its diffusing effect amplifies light rather than obscures it, emanating a mellow glow.

Tight construction and spray-foam insulation in the basement ensure that the heat from a Danish woodstove is held tightly within the walls, making the home energy efficient. Another minor challenge was having firewood cut in shorter lengths for the stove, which is narrow and compact to fit in the space and thus doesn’t take standard-sized pieces.

The tightness of the lot and the narrow street frontage worked to the neighborhood’s advantage because, explains Lehnen, “It maintains the scale and typology of the street to be considerate to the neighbors” while freeing him up to design something more contemporary on the other three sides. The house’s 40-foot depth follows the rise of the hill on an east-to-west axis (terraced landscaping was designed by Grannis). That meant many windows face south toward the entry path, deck, and outdoor dining area as well as a row of mature trees and plantings that conceal it from the street. Not only does this allow sunlight to flow in and be harnessed for passive heat, but it feels private within the medium-density surroundings.

All of this, of course, was hard-won. Nothing about it turned out to be easy. “It was a very humbling experience,” admits Lehnen. “But we learned a lot.” 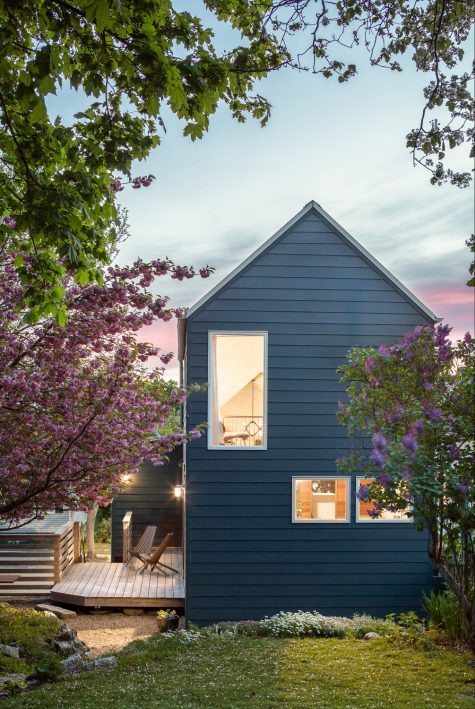 The terraced garden in back of the house was designed by Grannis. 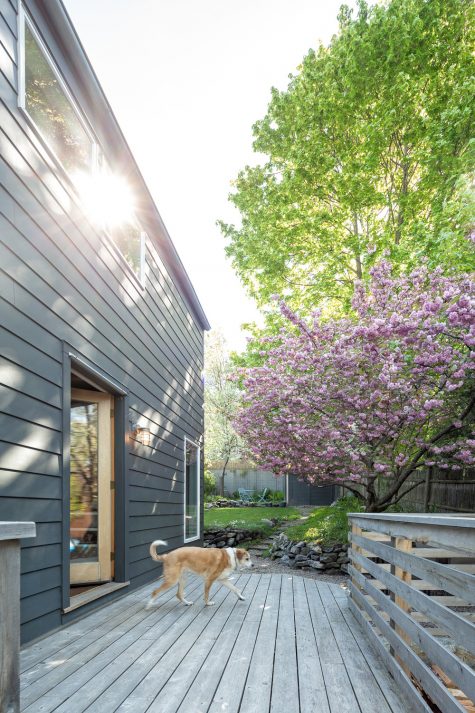 The entry from which Lehnen’s and Grannis’s dog Ira emerges is at the side of the house. 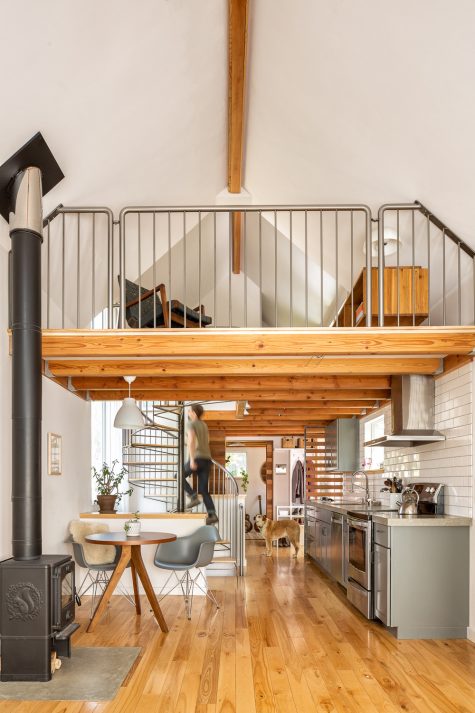 Architect Alex Lehnen ascends a spiral stair fabricated by Tunnelwerks International in Portland; the original house ended just behind it. 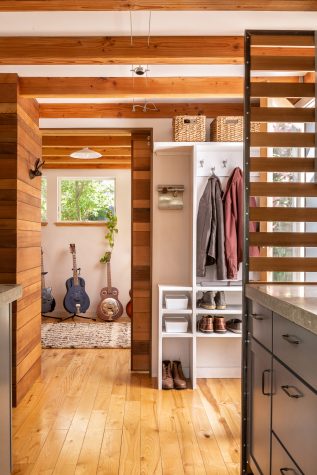 In tight quarters, compartmentalizing spaces without resorting to solid walls that would chop the space up was important. A wood-slat screen and mudroom-style cubbies create a sense of entry, partially separating the area from the kitchen. 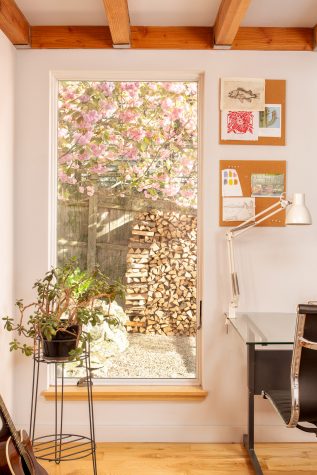 The office looks out to the wood pile. 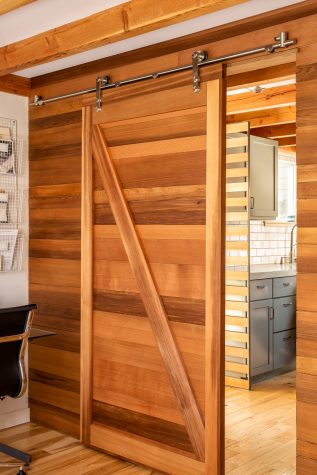 The office is accessed by space-saving rolling barn doors. 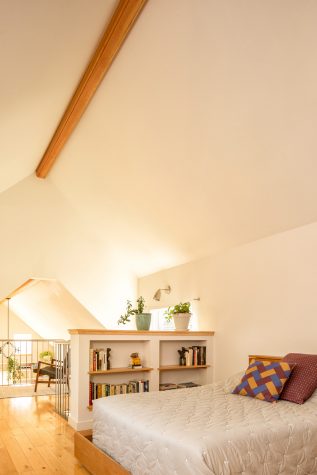 A bookcase creates a sense of privacy for the De La Espada bed at the back of the house.