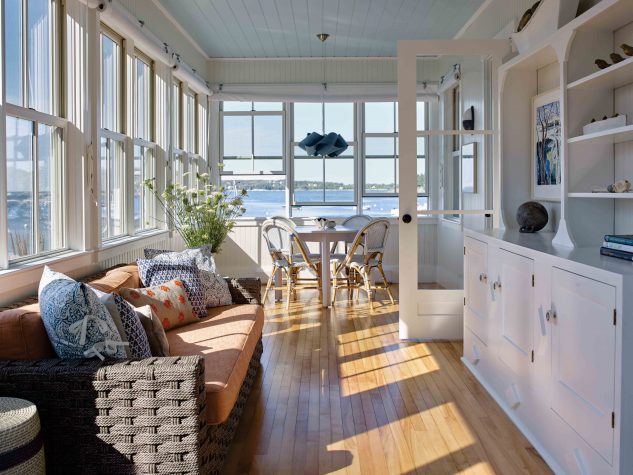 With its dazzling harbor views and airy indoor-outdoor ambiance, the updated sunroom is the perfect place to eat or read. Roll-down shades by Maine Bay Canvas offer a nautical touch. The hutch, which was originally in the living room, was restored by Ashley Curtis Painting. 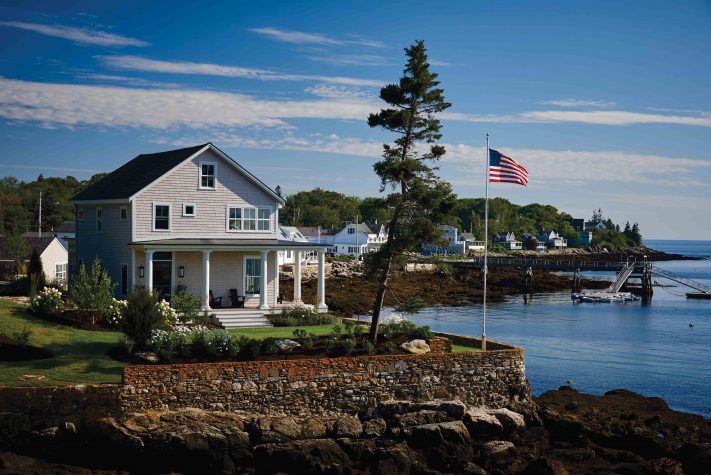 The home has been located at its current Ocean Point site since 1926, when it was moved by barge from Augusta. It was renovated by the Knickerbocker Group, with landscaping by Back Meadow Farm. “We have a lot of frontage, including a little beach, with a small staircase,” says Kate Horgan. “It’s really lovely; especially at low tide.” 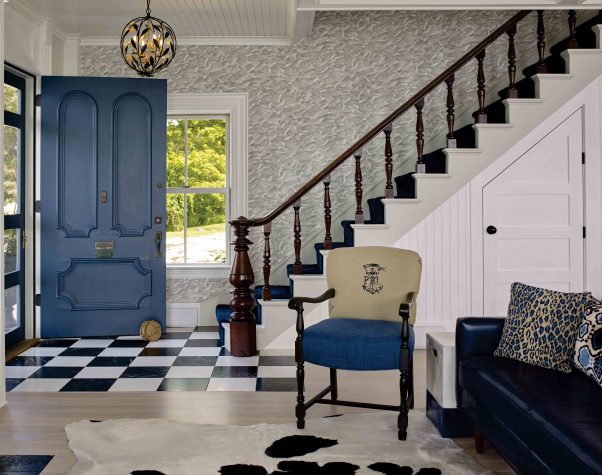 The refurbished front door and brass hardware, as well as the staircase and banister, are all original to the home. The wallpaper is from Cole and Son; floor tiles are from Old Port Specialty Tile Co. 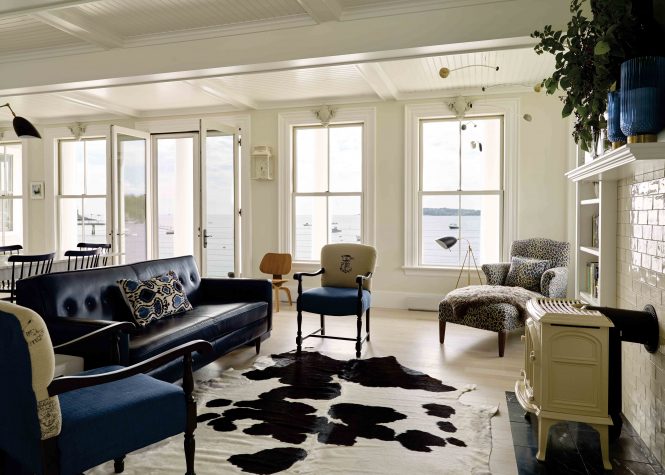 The open-plan living room embraces the water views, with new larger windows and French doors that open onto the wraparound porch. The coffered beadboard ceiling and gas stove are new, but the window casings and decorative medallions were repurposed from the original home, as were the fainting couch and two armchairs. The couch is from Design Within Reach. 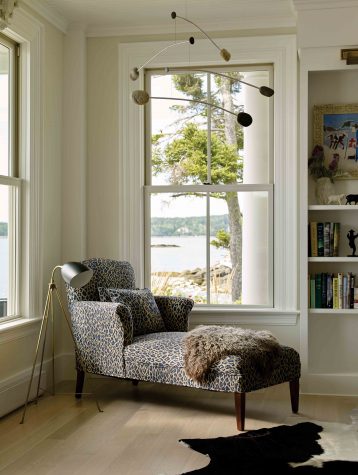 The fainting couch was restored and recovered by Home Remedies. The curly lambskin throw is from the Good Supply in Pemaquid. The hanging sculpture is from Abacus Gallery. 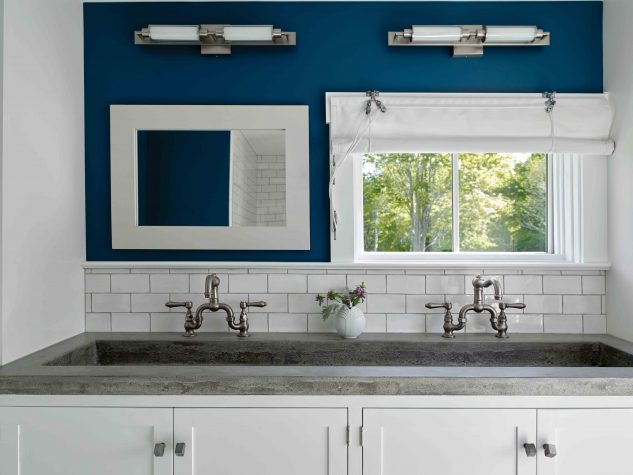 The family bathroom incorporates a custom cement sink and Perrin and Rowe faucets by Rohl. 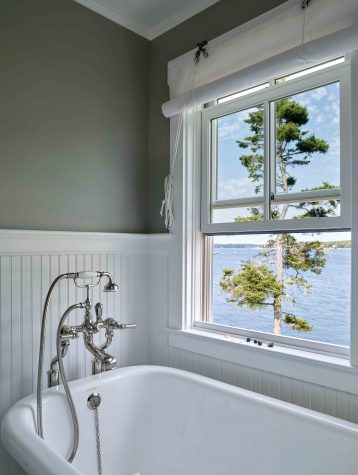 The window over the Victoria and Albert tub in the owners’ bath was a late addition: “I really wanted a view from the bathtub,” says Kate Horgan. 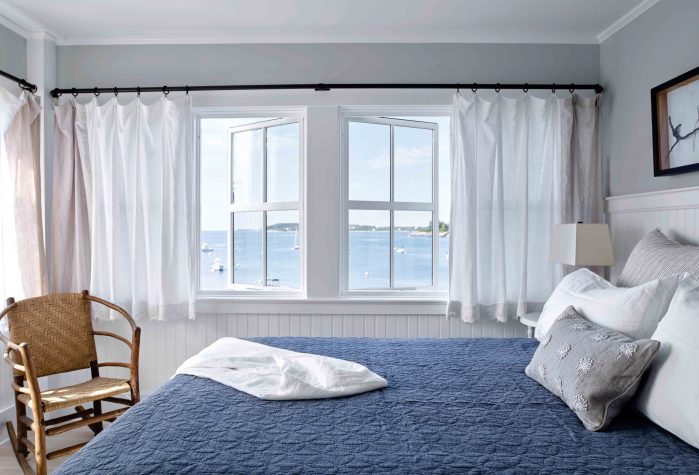 In the guest room, wraparound windows showcase curtains by Home Remedies, made from tablecloths Kate purchased in Italy. 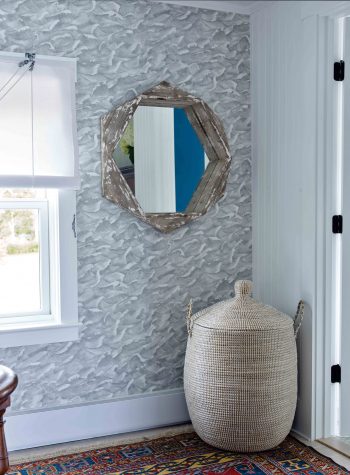 At the top of the stairs, a close-up of the “Columbus” wallpaper from Cole and Son, and the custom stair runner sourced by homeowner and interior designer, Kate Horgan, from Seret and Sons in Santa Fe. 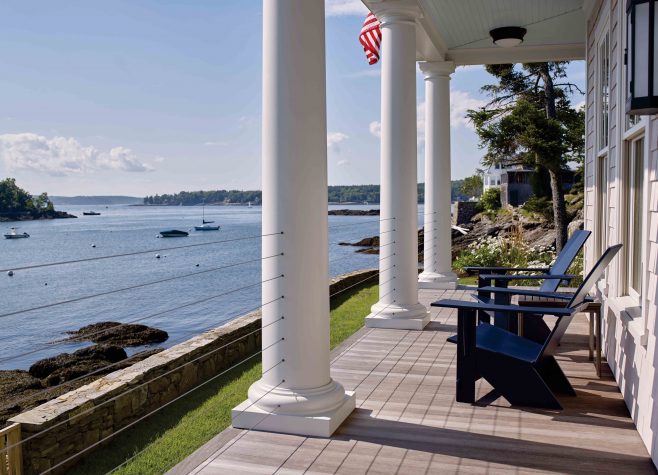 New porch columns, which were positioned to better accommodate the main-floor windows, and cable railings guarantee open sight lines, from inside as well as outside.

In 2017, Bob Horgan, a longtime Boothbay summer resident, was taking his daily walk around Ocean Point when he noticed a “For Sale by Owner” sign on the wonderful old house that was situated on the water between two inlets. A few days later, spotting the owner outside, he started a conversation and she invited him in. Not long afterward, he and his wife, Kate, an interior designer, agreed to buy the property. No strangers to renovation projects, the first call the Horgans made was to their favorite builders, the Knickerbocker Group, with whom they’ve worked on four projects in the midcoast area over the past two decades, including their main Boothbay residence, Summer Haven.

That the Ocean Point home, known as Twin Coves, enchanted the Horgans isn’t surprising. In addition to its prime waterfront location, at the top of a loop road that’s popular with local walkers, the home also has a unique history. The transitional Federal-Greek Revival residence, which dates back to 1906, was originally built in Augusta, but in 1926 it was moved by barge about 35 miles down the Kennebec River and reassembled on its present East Boothbay site by Stanley Hussey, of the Hussey’s General Store family. The home survived the move but came away with a few scars. “We discovered that the roof system must have been cut off when they moved it,” says Steve Berger, the project manager. “The corners were all original post-and-beam, but they had been hacked off at the second-floor plate line, and a lot of the framing that we encountered postdated the original build date.”

From the beginning, the Horgans intended to use the roughly 2,000-square-foot home, which is located just down the road from their main Boothbay address, as a guesthouse for family and friends. “It needed a lot of work, but I was thinking it was just surface work,” says Kate, the owner of Darché Designs, who devised the home’s interiors. “Boy, was I wrong. It was a jewel-in-the-rough, with the emphasis on rough!” It was also a team effort. In addition to Berger, now retired, and architect Susan Mendleson of the Knickerbocker Group—both of whom had worked on previous projects with the Horgans—the couple’s son-in-law, M. Haynes Johnston Jr., an aspiring architect who was interning with the firm that summer, also pitched in by working on the schematic plans.

Two factors drove many of the structural decisions: sustainability and the Horgans’ desire to use Twin Coves beyond the usual “summer water” season. They dug a well, hitting fresh water at 85 feet—a good outcome given the home’s proximity to saltwater. They also added foam insulation and electric baseboard heating, as well as a gas stove in the living room. The septic system, an overboard discharge system that releases gray water into the ocean, is original to the home. Because this kind of system can freeze, however, it’s not able to be used year-round. However, once they were able to access fresh water, the Horgans commissioned plans for a new in-ground pretreatment septic system that will eventually allow them to use the house throughout the year. There was one other unexpected early setback: the original siding contained asbestos. But a certified abatement team was brought in to remove it, and the project quickly progressed.

Embracing the home’s distinctive waterfront location and sweeping 180-degree views of the water, Kate worked with the architects to create an open-plan living space with clean lines and plenty of light. She envisioned a nautical design theme, adding brass accents throughout. “It’s almost like living on a boat,” she says. Taking full advantage of the home’s spectacular views, windows now wrap around corners on the main floor, as well as upstairs in one of the bedrooms. “That was Haynes’s idea,” she adds. “It makes you feel like you’re outside, in the elements.” In keeping with the indoor-outdoor scheme, she also incorporated works by a variety of artists throughout the home, with many pieces featuring natural elements and textures that bring even more of the outside in.

The architects’ goal was to reconfigure the interior space without changing the original footprint. “The main floor was a bunch of tiny rooms and a long skinny living room; it was very awkward,” says Mendleson. “We opened everything up and installed a steel beam to hold up that big span and help level the floors. We also made all the windows larger, so you can really appreciate the scenery.”

Because this wasn’t going to be the Horgans’ primary residence, they installed engineered wood veneer flooring from Coastal Maine Wood Floors on both the first and second floors, for added durability. They also decided against custom cabinetry, using Omega Cabinetry’s Dynasty and Pinnacle series in the kitchen instead. And wherever possible, they made an effort to salvage and repurpose elements from the original house. This was especially true on the main floor, where the old window casings were paired with new, larger windows, and decorative medallions were reinstalled above the windows in the living room. “I’m not sure what they were for, but I really like them,” says Kate of the unique ornamental objects. The main staircase and railing are original to the home, as is the front door and its refurbished handspun brass door ringer. Interior doors were also repurposed, with a few new ones built to match. The second floor was always much simpler, in terms of mouldings and window and door casings, and the renovation retains that simplicity.

The sun-drenched living room is anchored by a new coffered ceiling, embellished with opposing patterns of beadboard in each bay. “That was all Kate’s idea,” says Mendleson of the design. “It’s really fun.” Not only does the ceiling’s pattern and texture help conceal the steel beam that now runs the length of the room, but they also give the illusion of more height—especially under the deep coffers alongside the beam. Unifying the main floor space and echoing the “modern cottage” leitmotif, wainscoting covers the walls in the area adjacent to the kitchen, under the main staircase, and throughout the upstairs, as well. For the kitchen, Kate stuck with the simple, open plan, using exposed shelves and a rolling cart for additional storage. Another decorative element that Kate specifically requested: the reclaimed column, sourced from Portland Architectural Salvage, which hides a structural post and wiring while referencing the nearby porch columns. A powder room that was originally located under the staircase was moved closer to the kitchen to make room for a coat closet.

In the sunroom, the addition of larger windows and baseboard heat-ing means the area can now be used most of the year. Adding to the cheery ambience, the ceiling was painted a traditional light blue, mimicking the exterior porch ceiling. The room also boasts original, refinished wood floors and a built-in bookcase that was previously in the living room and that Kate now uses for linen storage.

A few key structural changes upstairs further optimized the layout. The third-floor attic originally included a living area with dormers, but as Mendleson explains, “We decided the dormers were ugly and they didn’t need all that space, so we took them out. Now the attic is used for storage, accessed by a pull-down stairway.” Removing the full-sized staircase allowed for the addition of an owners’ bath on the second floor, which connected to the owners’ bedroom to create a suite. A fourth bedroom on the street side was converted into a common bath. “The bathroom used to have one of the best views,” says Mendleson. Now all three bedrooms face the water.

Outside, the porch wraps around two sides of the home, offering unparalleled harbor views. One set of stairs that faced the water was removed, creating more usable square footage, while the remaining steps were replaced with a wider staircase that doubles as seating on warm summer evenings. Sadly, the original porch columns weren’t in great shape, and their placement wasn’t aligned with the new main-floor windows, so the architects reworked the spacing and replaced them with new columns in a similar style by DSI Columns. Finally, a new cable rail system replaced the chains that were draped from column to column, a safer option that brought everything up to code.

Today, Twin Coves is blessed with an abundance of bright, picturesque nooks in which to relax, inside as well as outside. But when asked to name her favorite space, Kate doesn’t hesitate. “In the living room, sitting in the corner, knitting or reading,” she says. “The light is never the same, and there’s always lots of action in the harbor.” It’s the ideal place, any time of year, to take in the vivid, ever-changing scenery just beyond the seawall. 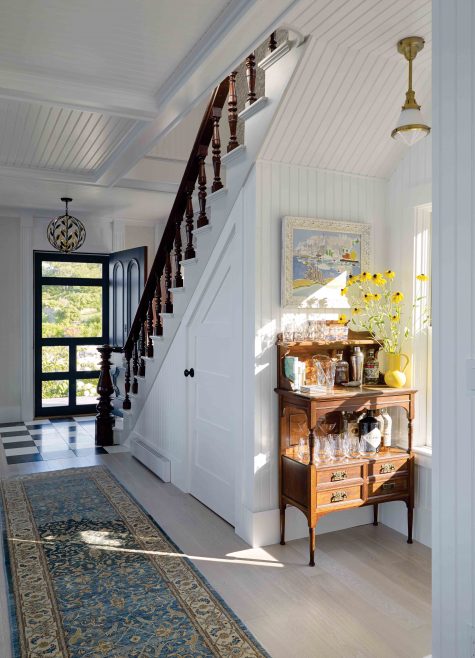 An antique bar from Cabot Mill Antiques sits in a cozy nook beneath the staircase, with a painting by Patrick McArdle hanging above it. 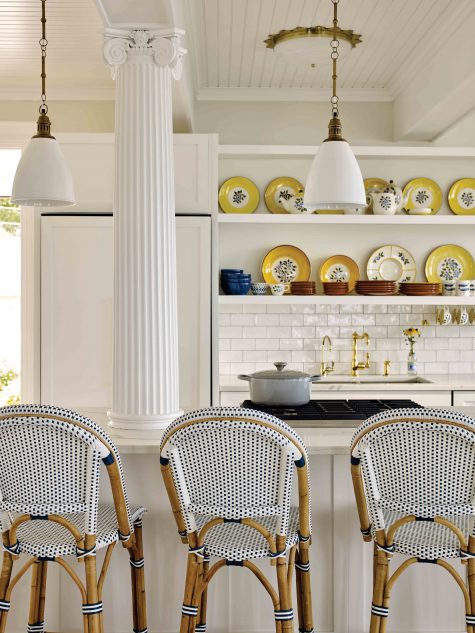 A decorative column conceals a structural post in the kitchen, while brass accents, including a Rohl faucet, play up the nautical theme. Kate Horgan’s collection of vintage “Blueberry” Stangl Pottery, which came from her childhood home, is displayed on the open shelving. The barstools are from Serena and Lily.