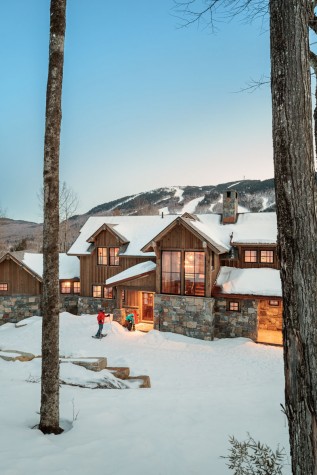 A view from one of Sunday River’s ridge trails into the backyard of a mountain-style home. Western features include the use of stone (in this case, American granite), large roof overhangs with bracket detailing, and board and batten for the wood exterior. Of the two back entrances, the family skis into the entrance on the right, which has a ski room well outfitted for storage. 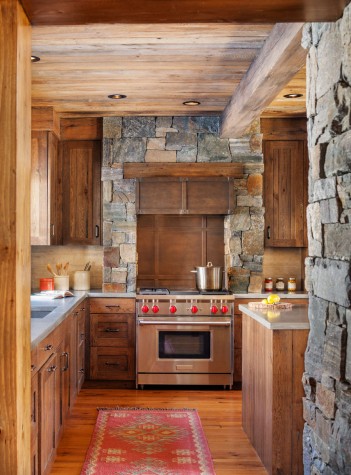 The same stone that is featured on the home’s exterior and fireplaces is used in the kitchen, both around the stove and in the form of two columns that border a counter that separates the kitchen from the great room. Old cookie sheets inspired the metal of the backsplash and stove hood. The ceiling, cabinets, and beams are all oak. 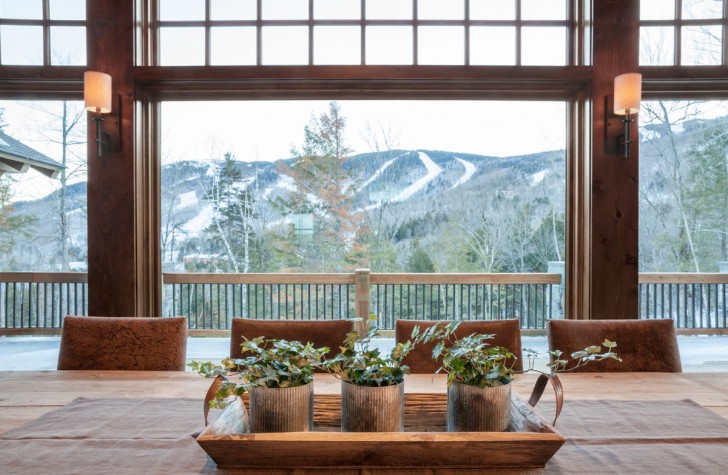 A view from the dining room to the trails of Sunday River. The table and straight-back leather chairs are from Restoration Hardware. 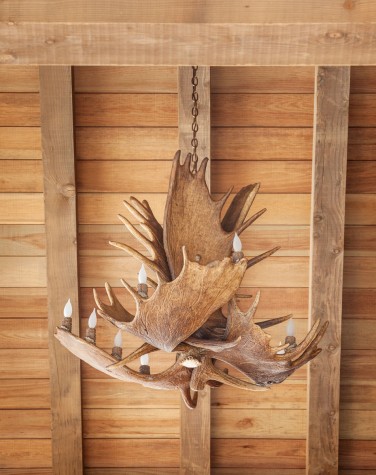 The front porch features an antler chandelier from a Canadian camp. 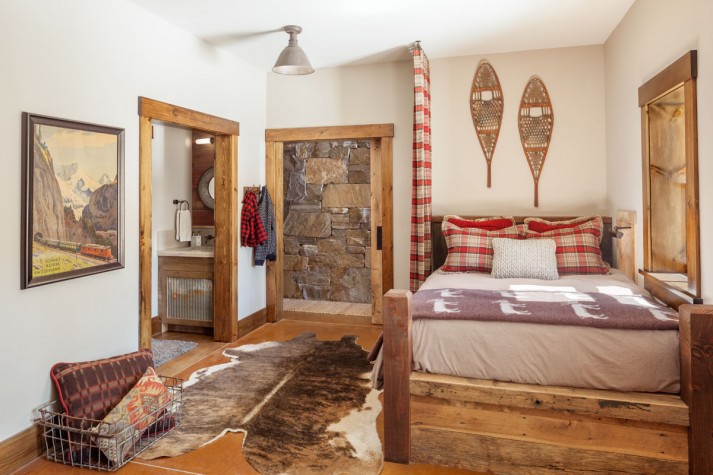 The bunkroom can sleep an entire family. Here, Bruce Lilly of Clearwater Builders in Bethel built a bed with storage below. The plaid curtain closes off the bed from the rest of the room. Designer Betsie Bramhall of Rob Bramhall Architects in Andover, Massachusetts, found an antique Swiss poster and framed it for the wall on the left. Through the door on the left, the bathroom consists of an anteroom with custom vanities and mirrors with surrounds that look like old miners’ tin pans. The mirrors sit on an accent wall of reclaimed barn board. 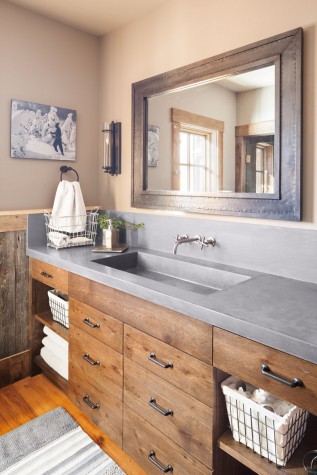 In the owners’ bathroom, the reclaimed oak used else- where in the house is stained for a darker, more refined look. The countertop is concrete, and the mirror surround is zinc. The photo features the wife’s grandfather, an avid skier, in Vermont in the early part of the twentieth century. 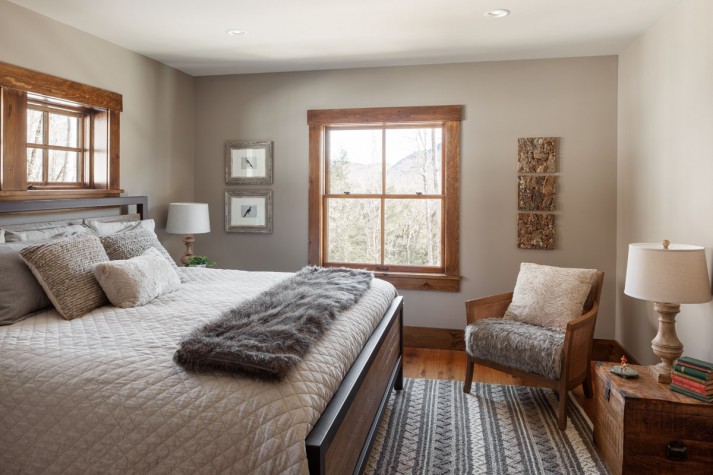 This guest room serves as an “in-law escape” room, located away from the central spaces of the home. Lying in bed, one can look out the window to Sunday River’s ski trails. 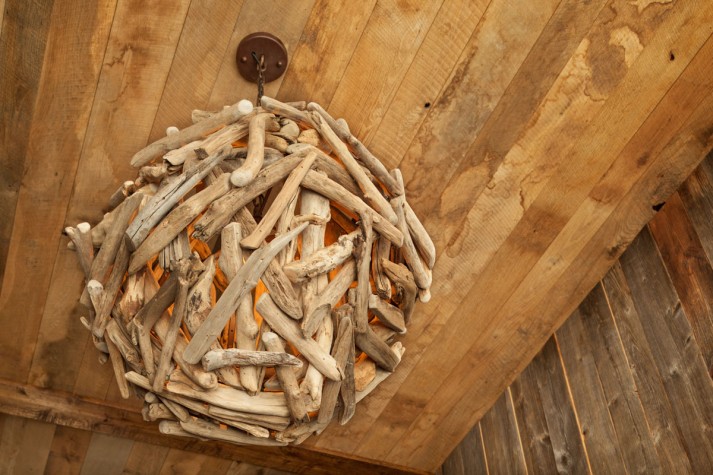 A pendant made of sticks hangs in the central stairwell. At night, when it is lit up, the husband says it “looks like a glowing moon inside the house.” 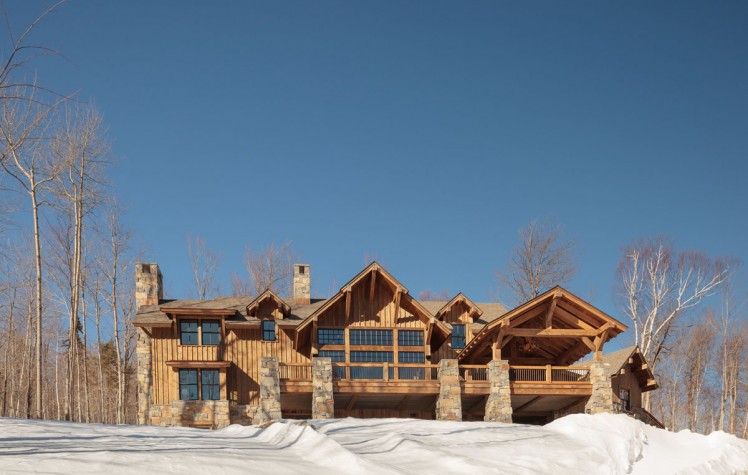 A view from the street, up the steep hill that leads to the front of the house. A walkout basement is on the ground floor, with a large porch above. 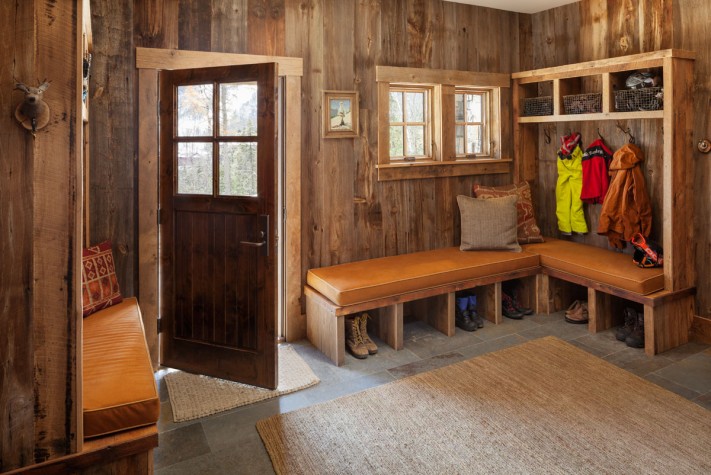 The mudroom serves as a basement entry from the garage and driveway. The floor is tile, the walls are barn board, and the cabinets and cubbies are reclaimed oak. 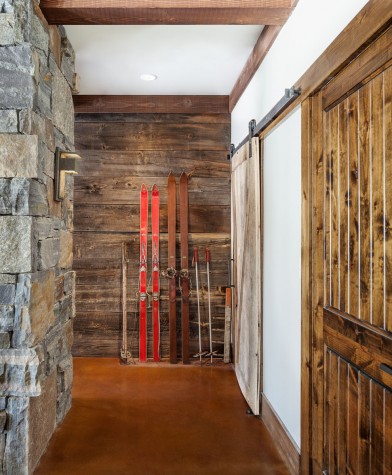 A hall in the daylight basement leads past fireplace stone on the left and a barn door on the right that slides open to access exercise equipment. The far wall is faced in the reclaimed barn board that appears throughout the house. The floor is stained concrete.

A family that loves to ski nestles into a trailside abode

How better to think about acquiring a ski house than to go skiing? That’s what the husband of a Massachusetts couple did when he was looking to build a house in Sunday River. He skied down into the property for sale, thought it looked like a nice spot, and skied out, thereby taking a first trip down and up the hill that would come to occupy his winter weekends for years to come. “Nice” is actually an understatement for the property he saw. The land was part of a subdivision with wide steep lots that have a direct view of Sunday River’s slopes in one direction and direct access to a ridge trail in the other. The couple already knew they wanted a sizable house. They had a place in one of Sunday River’s original developments, but with their three young children and their desire to entertain family and friends, they always felt they could use more space.

Architect Rob Bramhall of Andover, Massachusetts, had worked with the couple on their primary residence, so after securing a Maine builder—Bruce Lilly and Eric List of Clearwater Builders in Bethel—the couple sought Bramhall’s advice. Fortuitously, Bramhall had been trained in Montana, where he’d been exposed to mountain architecture, and he welcomed the opportunity to translate elements of that style into a New England setting. What that meant for the exterior was the plentiful use of American granite, thick slabs of which were stepped so that, when snow falls, some can collect on the stones. It also means Douglas fir framing, large roof overhangs, oversized windows and doors, multiple gable roofs, pine board-and-batten siding, and bracket detailing. The roofs were either shingled with asphalt or topped with Cor-Ten corrugated steel, a material that rusts, but only on the surface, so one gets an aged look without the attendant damage. “Refined rustic” became the catchphrase for the interior, which makes abundant use of metal, stone, and wood in several different species, much of it reclaimed. “We were not looking for an overly campy or fake-chalet feel,” says the husband. Accordingly, Clearwater Builders built an upscale vacation lodge with ample room to play, gather, and rest. The earthy materials are accented with an occasional industrial material, like poured concrete (for the kitchen island counter, bathroom vanity counters, and the family room floor) or corrugated steel (for kitchen pendant lights and cabinet faces). Two particularly fun material details are the stove hood and backsplash, which look, the wife points out, like old cookie sheets, and the mirror surrounds for one bathroom, which look like old miners’ tin pans.

The house is big enough that several groups of people can occupy different areas at once. The core of the house is a great room with massive stone chimney. There, a hefty wood table with leather chairs dominates a dining area. A wrought iron and glass chandelier hangs over a living area furnished with large leather sofas and chairs. Slab stone columns and a distressed zinc counter separate the kitchen and its built-in breakfast nook from the living space. When one is in the great room, one can look up to see the chunky Douglas fir framing and reclaimed oak ceiling, as well as a bridge with wood- capped steel railings that joins two upstairs bedrooms, one for the couple’s two girls, another for their boy. A separate main floor area has a guest suite. An owners’ bedroom (with a gas fireplace) is down a hallway from the great room. Downstairs, there is a daylight basement, which functions as a family room, and (hidden behind a sliding barn-wood door) a bunkroom with built-in bunk beds, a window daybed, and a built-in queen bed—essentially a sleeping room for an entire family. The various entrances to the house are ski-friendly, with built-in benches with low drawers and cubbies with steel baskets, all providing plenty of room to drop, hang, and store gear. For someone who wants to sneak away, the house is full of nooks where one can curl up with a book. “There are lots of areas to sit and do things,” the husband says. “Whenever we could, where there was a window, we put a bench beneath.”

It’s all too easy to imagine how a house like this might delight children. Surely the arrival of the family involves some eager scampering up the stairs to the bedroom that (in the case of the girls) has a wall of birch tree wallpaper and owl stuffed animals, as well as an old apple orchard ladder onto which have been strung threads of white lights in lieu of traditional night lights. The boy’s room has the same lights but twisted into a nest shape. As for children who are guests, they must run to the ground floor to explore the family room with its custom shuffleboard table and pounce-able U-shaped leather couch before they dive into their bunk beds, each of which can be closed off with plaid wool curtains. (A light and outlet for an iPad are built into each bunk.) There are also friends to greet, like Marty, the massive moose head over the living room fireplace. “We got attached, and we gave him a name,” says the wife. The head moved with the family from their previous Sunday River house. “You’re coming with us,” the wife told Marty at the time. “You’re part of the family.”

“We did not want a house full of antlers,” the husband says of the house. But, in fact, in addition to Marty there is a deer head in an upstairs hallway and an elaborate lamp made of antlers on the front porch. “While we wanted some antlers, we didn’t want it overly antlery,” the husband revises. Woodland animals occupy the house in other ways. There are pillows with deer on them, wool throws with moose silhouettes, a faux calf’s-skin bench in the owners’ bedroom, and fur throws throughout the house. Designer Betsie Bramhall of Rob Bramhall Architects found tiny busts of different woodland animals online, and rather than mount them all together, the son suggested they be hidden about the house, so friends could make a game of discovering them.

The back of the house is so close to a ski trail that one could shout a hello to passersby. Here, the family typically ends a day skiing by lighting a fire in a stone fire pit surrounded by large stones for seating. The front of the house is solidly private. The drama of Sunday River’s trails is visible but farther afield, whether by day or lit up at night. The views can be accessed via a walkout limestone terrace downstairs or a wraparound deck upstairs. A hot tub and second fire pit for this side of the house are in the works.

In the end, Betsie Bramhall says, the house is all about “fun, family, and memory making.” The homeowners originally started bringing their children to Sunday River when their eldest son was ready to ski. At that time, they made a very conscious decision—“We wanted to be a ski family,” says the wife—and now they have a striking home in which to be just that. 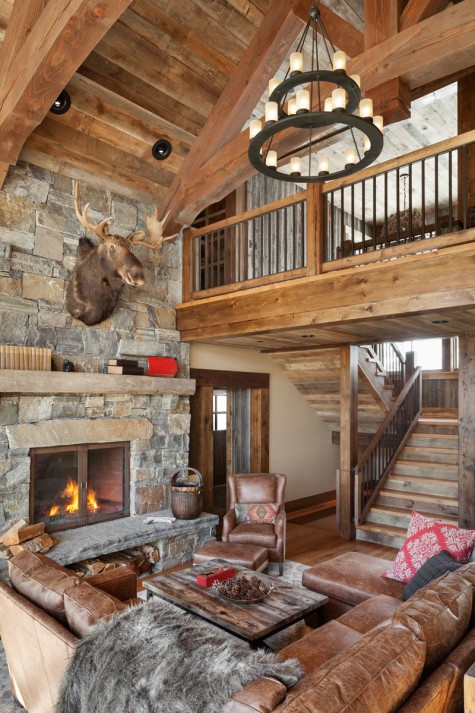 The great room showcases some of the abundant wood species used in the house, including the Doug- las fir used for the beams and trusses, the reclaimed oak on the floors, ceilings, newels, and stair treads, and the gray barn board on the stairway walls. The barn board and reclaimed wood, which were also used for cabinets, vanities, and accent walls throughout the house, come from Longleaf Lumber in Cambridge, Massachusetts. The bridge connects two upper bedrooms. 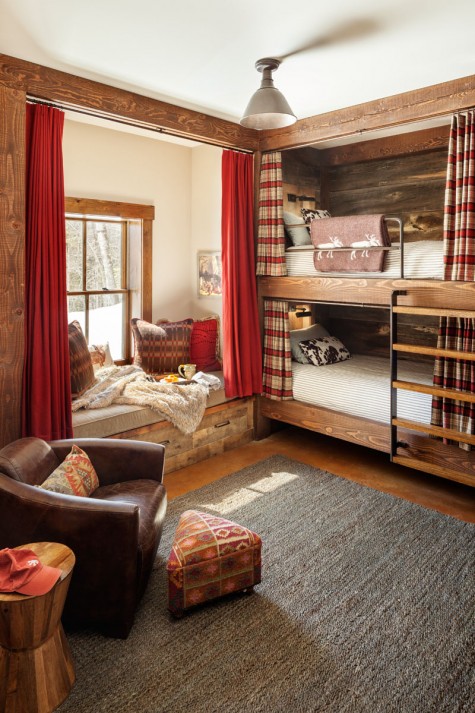 In a bunkroom a daybed and two of the four bunks were custom built of Douglas fir with custom curtains that offer some privacy. The space, designed for an entire family of guests to occupy, has storage below the daybed and reading lights and iPad plug-ins in each nook. In a nod to the forest theme throughout the house, the blankets have moose silhouettes. 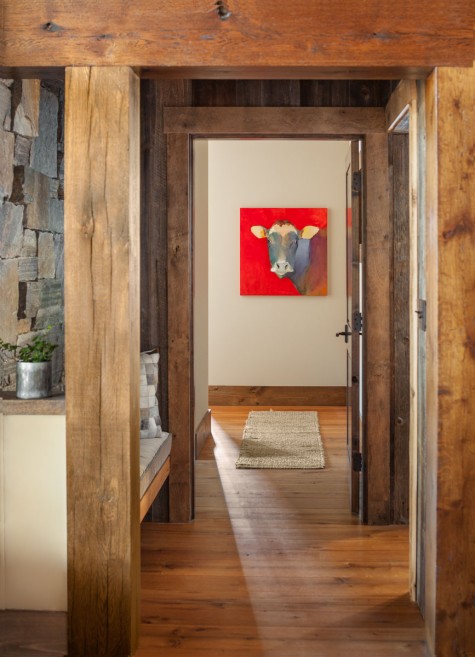 A hallway leads to the owners’ bedroom. A ski room is off to the right. The bench at the left provides extra seating for people to pull their boots on or off. The home- owners found the red cow art online. 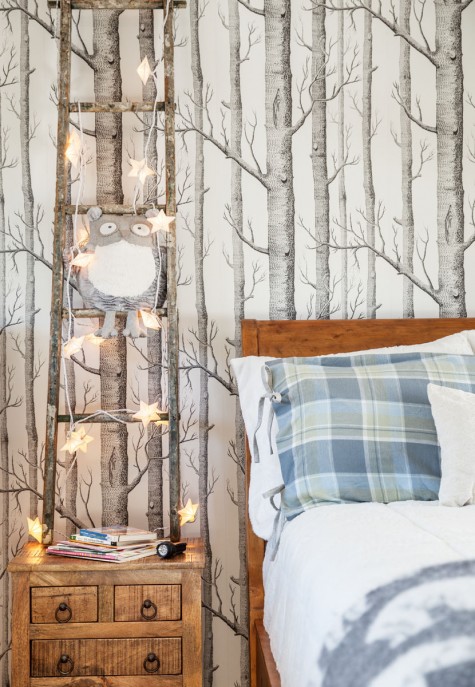 A girls’ room features birch tree wallpaper and an owl stuffed animal perched on an old apple orchard ladder, which has been thread with white lights that serve as night lights.