So Much to See on the Water 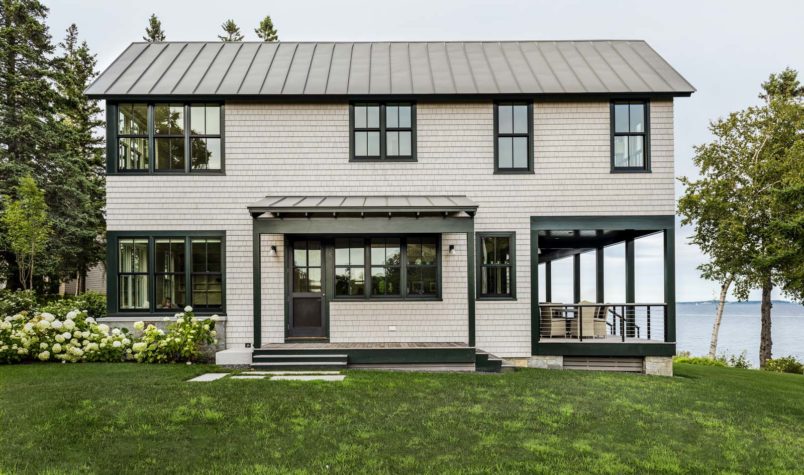 This oceanside home in Rockport designed by Hamilton Snowber Architects in Washington, D.C., and built by Cold Mountain Builders of Belfast has a side entry off the kitchen. Architect Chris Snowber used CAD modeling to consider different colors for the house. At one point, the homeowners looked at white trim, but eventually they chose darker colors— black for the window sashes and doors, forest green for the trim—to blend with the landscape. 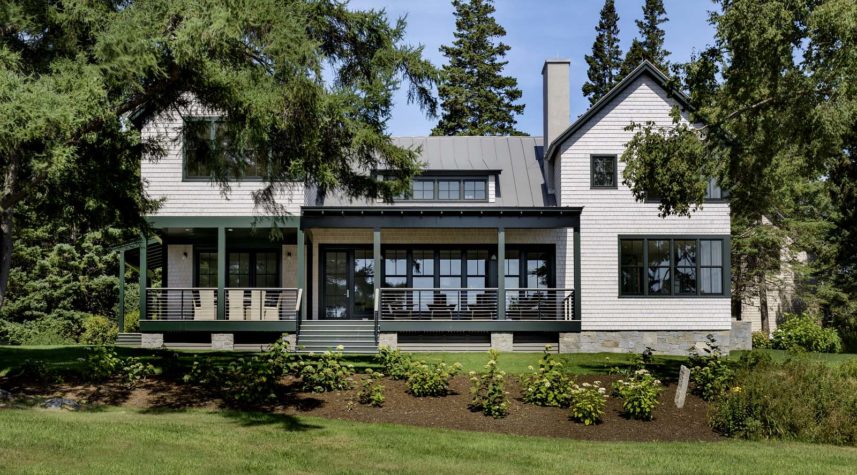 The home has two gable forms joined by a cross gable, which is complicated by a shed roof with clerestory windows. In order to maximize views, Snowber designed the two side gables so they are not quite parallel. The granite at the home’s base relates to the living room fireplace and the rocky shoreline. To the right, windows wrap the corner of the house. 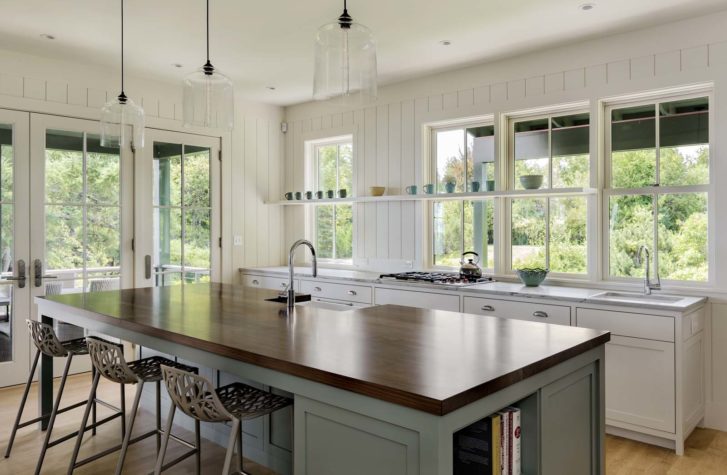 A shallow display shelf runs along the sash of the kitchen window. The cabinetry by Bench Dogs is meant to blend into the wall, so the island (with its walnut top and subtle green color) reads as the distinctive element in the room. The stools are from Janus et Cie. The glass pendant lamps are from Niche and were chosen because they don’t block the views. 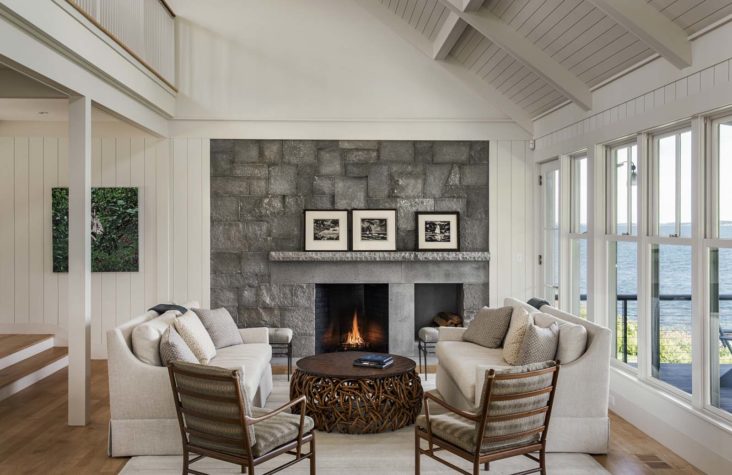 The mantel and firebox are asymmetrically placed. The arrangement of the stone, arrived at with Hooper Masonry, creates a pattern of smooth and rough granite. The Palecek coffee table is made from hand-bent rattan. The couches are from Verellen. 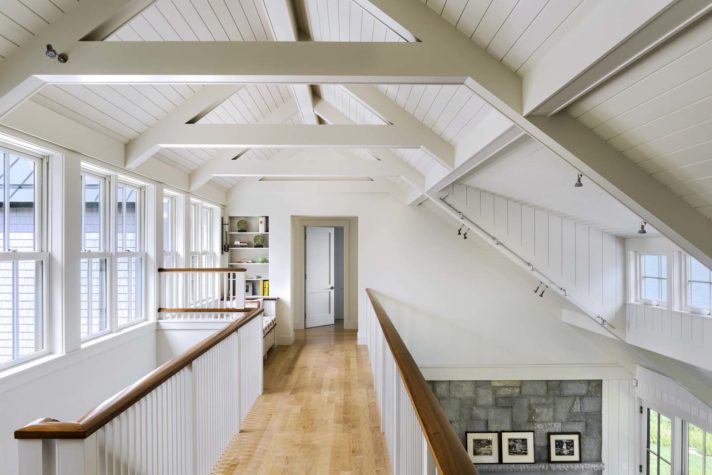 A bridge with a daybed joins the two ends of the house, each of which has two bedrooms and a shared bath to accommodate the owners’ four grown children and grandkids. The bridge is open to the living room. The columns and beams are simplified, as part of the overall effort to embrace the vernacular while stripping elements to their most basic form. 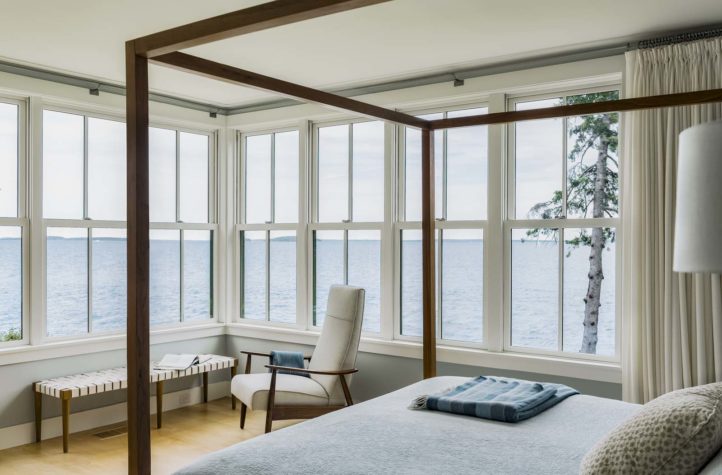 Thanks to the windows that wrap the corner of the owners’ suite (opposite), the space feels “cantilevered over the ocean,” according to Sparber. The bed is from Room and Board, the bench is from Room, and the chair is from Design Within Reach. 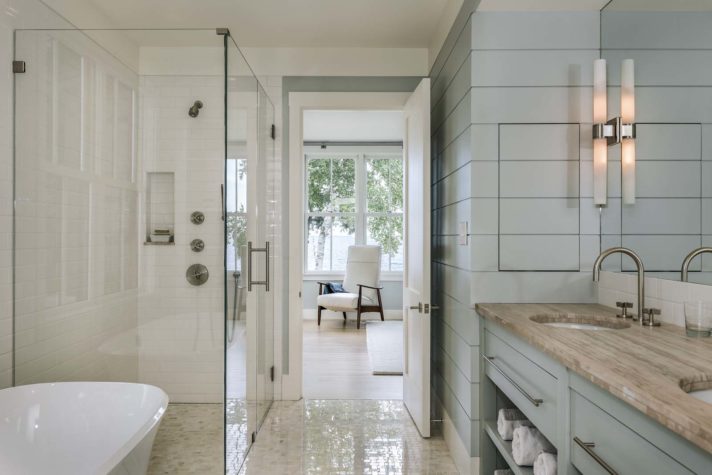 Bench Dogs built the double-sink vanity in the owners’ bathroom (above). A medicine cabinet is hidden in the paneling to the right. The floor is marble, and the walls are white ceramic. 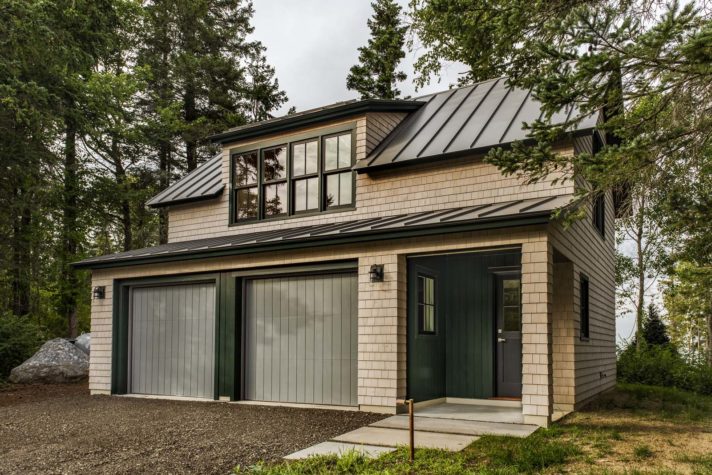 The garage has a pop-up dormer that prevents its building mass from seeming too large. The white cedar shingling changes to forest green vertical siding by the covered door. The second floor of the garage has a space that will eventually be converted into a sewing room. 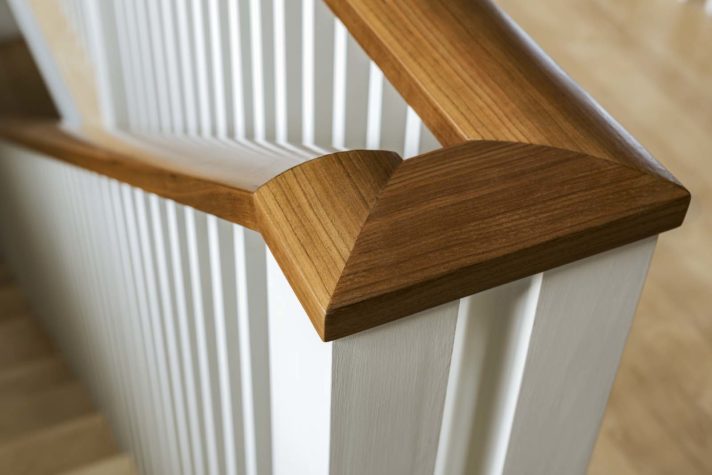 The handrail is cherry.

A contemporary design references the past in an airy, serene midcoast property.

This country boasts many striking waterfront properties, but when a Washington, D.C., couple started looking got an oceanside second home, they were drawn to midcoast Maine for more than its physical charms. As the wife says, “The truth is that, in addition to its extraordinary and rugged beauty, what attracted us to midcoast Maine is its vitality, reflected in the many highly creative people—actively engaged in a wide variety of activities and professions—who we have encountered here.” She and her husband had a general familiarity with the region, having sent three of their four (now grown) children to Alford Lake Camp in Hope and having seen two of their children study at what is now Maine Media Workshops and College in Rockport.

The couple purchased a 1940s ranch on a rocky ledge overlooking Penobscot Bay and began to imagine what they could build on its footprint. They pictured a new house that would serve, in the words of their architect, Chris Snowber of Hamilton Snowber Architects in Washington, as a “grandchild magnet.” The homeowners were comfortable working with Washington- area talent: Snowber and his partner and wife, architect Cynthia Hamilton, who have vacationed in Blue Hill for the past 25 years; project manager Michael P. Rouse, also of Hamilton Snowber; and Jodi Macklin and Lauren Sparber of Jodi Macklin Interior Design in Chevy Chase, Maryland. (The homeowners had previously worked with Hamilton Snowber on Renovations to their primary home.) Still, they knew they needed a local builder, and they found a match in Jay Fischer of Cold Mountain Builders in Belfast.

In Washington, the couple has a shingle- style house in a historic district. In Maine, even their contemporary house echoes the past. On the exterior, the basic design consists of two gable forms joined by a cross gable and, on the interior, of two wings separated by a soaring central space, which contains the living and dining areas. Downstairs, the kitchen and library are in one wing while the owners’ bedroom and study are in another. Upstairs, a bridge outfitted with a daybed connects the two wings, each of which has two bedrooms and a shared bath.

“There is the sense of arrival that one has with a classic Maine summer cottage,” says Fischer of Snowber’s design. “You come to a generous door and are immediately drawn to the water through windows on the opposite side of the home.” The exterior is classic white-cedar siding, and the windows are classic double-hung with a two- over-two formula. That said, the fenestration is both contemporary, as with the wall of oversize windows that line the ocean-facing side of the ground floor, and unusual, as with windows that wrap two corners of the house. The trim is a classic forest green, but the window sashes and doors are black. The back porch, another traditional summer cottage feature, has modern detailing: a black metal railing with stainless- steel cabling and an ipê cap.

“We’ve abstracted from traditional elements,” says Snowber, “but stripped away to get down to the essentials.” The trim and mouldings are simplified. The columns in the foyer are slim and square. The great room’s space is distinguished by different ceiling heights—low for the kitchen, cathedral for the living room—and defining elements, such as a built-in sideboard that serves as a partial room divider. The two upper units that frame the cabinet have glass doors on both sides, so even though the kitchen is clearly separate from the dining and living area, the spaces still feel like one room.

“We wanted it to be a surprise inside and not predictable,” says the wife. This is evidenced in small decisions—for instance, a walnut countertop for the light green kitchen island— and large, such as the living room fireplace wall, which is made of meticulously fitted rectangular granite boulders that surround a firebox and log storage niche. Playing with rough and smooth surfaces and asymmetrical and symmetrically placed elements, the wall manages to lend the elegance and artistry of an abstract painting while also heating the room on cold evenings. The stone of the wall was purposely related to the stone on the exterior, where granite shows up in flat slabs at the entrance, in veneer on the foundation, as building blocks of a landscaping wall, and as a ledge above the foundation. The careful detailing throughout the property includes the house’s curved cherry staircase handrail, whose form perfectly fits the palm of the hand, and the stainless-steel circular brackets on the cherry handrail of the stairs that lead to a room above the freestanding garage, which will eventually be a sewing room.

Because their impulse was to keep the house light and airy, Macklin and Sparber picked beach-tinted neutrals—tans and blues and greens—when appointing the house. They mixed materials and textures but kept patterns to a minimum, allowing themselves the occasional dark note, as seen in the cherry dining room table and chairs and the owners’ cherry canopy bed frame. A coffee table of hand-bent, interwoven rattan with a wood top was, Sparber admits, “a little bit of a push, but I gave the wife a money-back guarantee that she’d like it.” Indeed, it is now one of the wife’s favorite pieces.

While one would be hard pressed to pick a “best” view in the house, given the abundance of choices, the owners’ bedroom is particularly striking. Thanks to the corner window, the room feels, as Sparber says, “cantilevered over the ocean.” To preserve the drama, light sheers cover the windows and the furnishings were kept to a minimum. The adjacent bathroom is also light, with marble floors, a glass shower, and glass tiles. “It was an easy house to work on,” says Macklin, “because its bones were so beautiful.” The additions she and Sparber made are beautiful, too, but beautiful in a way that does not detract, she says, “from everything else happening.”

And what  happening, now that the owners have been able to enjoy their home for two summers? Enjoying activities while also being at peace. Both husband and wife work full-time—he as a litigator in private practice, and she with innovative high schools for students from economically disadvantaged families—so they don’t entirely relax in the summers. After all, this is a vacation home with an office. Still, as the husband sits at his desk, he looks out the window through the woods at an old shed that he likes. He could have taken it down, of course, but he didn’t. “I see it as part of the life and history of the property,” he says, and he enjoys that, as well as watching the wild turkeys, various birds, and seals. The open ocean is to the right of the shed. “There is a lot of traffic there in the summer, between Camden and Rockport,” he says. “Schooners go by. The lobstermen start at 6 a.m. Boats begin to arrive.”

The wife adds, with pleasure, confirming the rightness of the couple’s initial impulse to buy by the ocean: “When he sits by himself, he calls to me and gives me the boat report. There’s so much to see on the water, and I feel such joy in seeing my intense and hard- working husband relax into the rich detail and wonder of the Maine coast.” 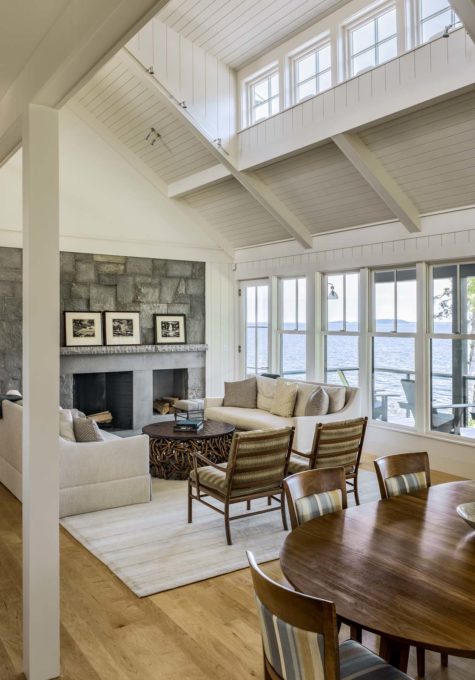 Interior designers Jodi Macklin and Lauren Sparber of Jodi Macklin Interior Design in Chevy Chase, Maryland, kept the materials and textures light in the living room, as the wife didn’t want distracting patterns. The Thos. Moser dining room chairs are upholstered in Rogers and Goffigon fabric. The dining room table is from City Joinery. A.E. Sampson and Son is responsible for the maple flooring. 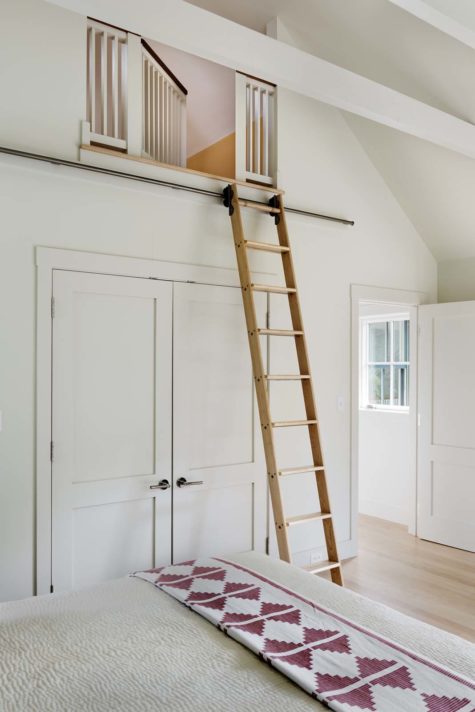 The library ladder in one of the guest rooms leads to a loft that serves as playroom for grandchildren. 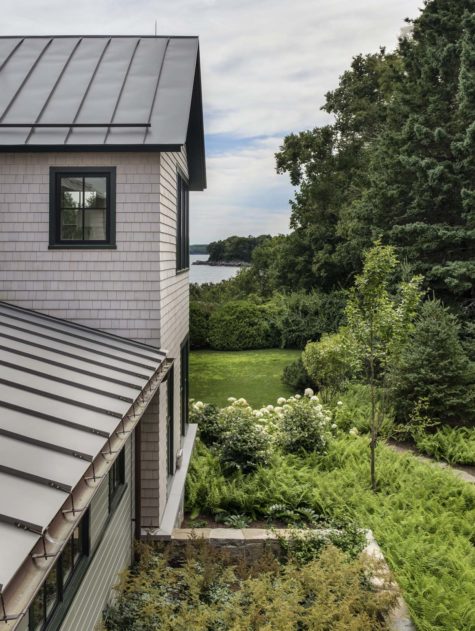 The home looks out onto the Atlantic (left). The overall lot has an expanse of lawn sloping to the seawall, then rocky shore from the seawall to Penobscot Bay. Staying aware of the balance between horizontal and vertical, Stephen Mohr of Mohr and Seredin Landscape Architects knit the house into the land by preserving specimen and mature trees, bringing back some of the woods, and adding naturalized plantings.