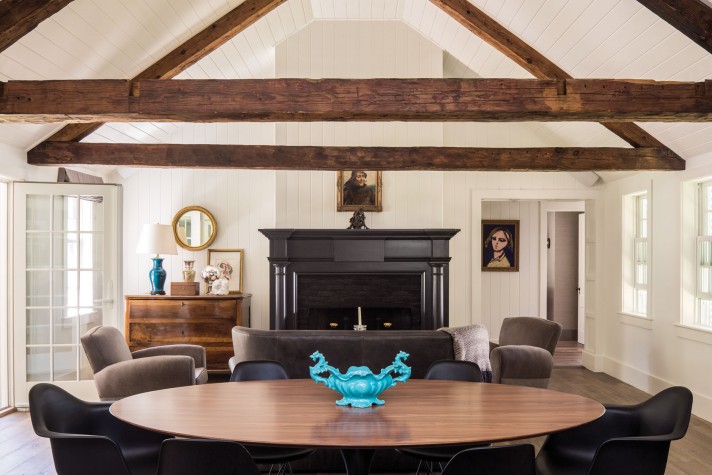 A turquoise Italian dragon bowl from Peggy Carboni Antiques in Wells is a favorite possession, in no small part for its color. The bowl sits on a rosewood Saarinen table with black base that is surrounded by Eames chairs, all from Design Within Reach. 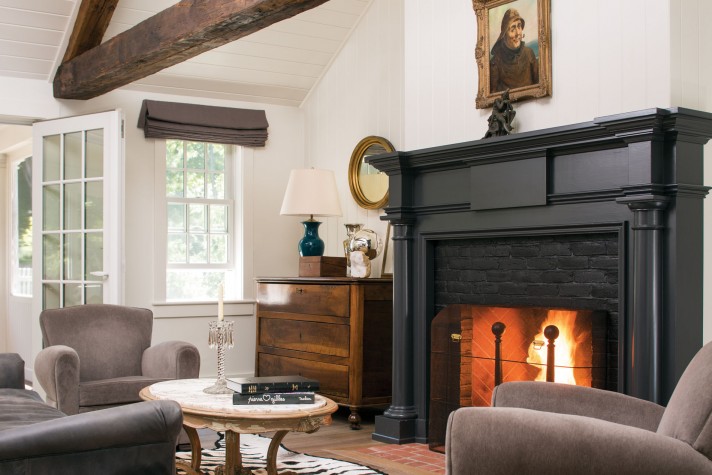 A view of the fireplace end of the great room, showing original timber beams, white beadboard on the ceiling and walls, a new fireplace, and French 1930s chairs reupholstered in gray mohair from Holly Hunt. 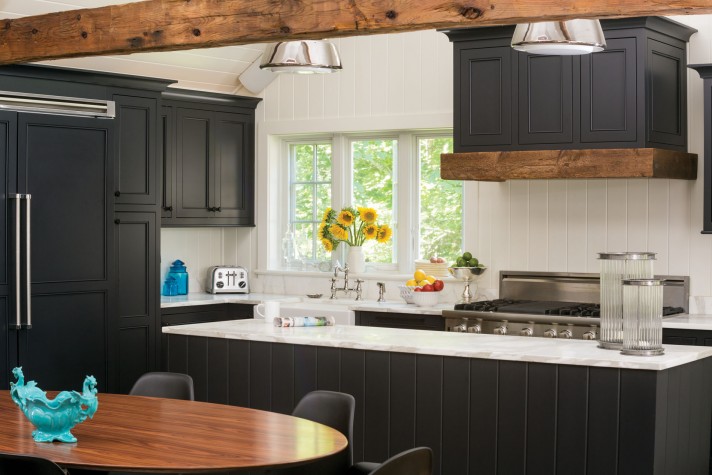 The kitchen features black flat-panel cabinetry and an island. The beam under the stove hood was cut from an older part of the house. 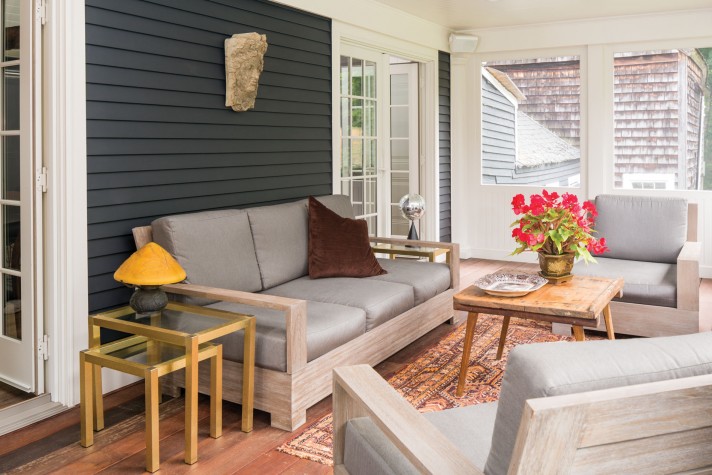 The renovation added only one room: a screened porch with ipé flooring and Restoration Hardware furniture. 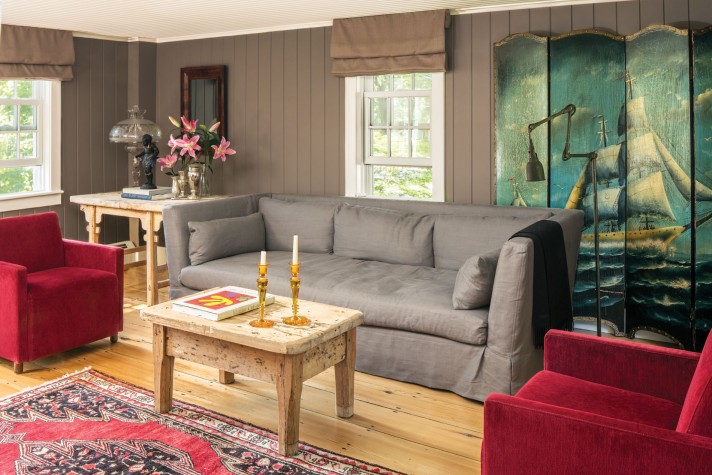 The family room with red velvet chairs from Corey Daniels Gallery in Wells, a gray couch from Restoration Hardware, and a painted screen found in an antiques store. The homeowners liked the screen’s patina and fell in love with the color, which they thought perfect for Maine. 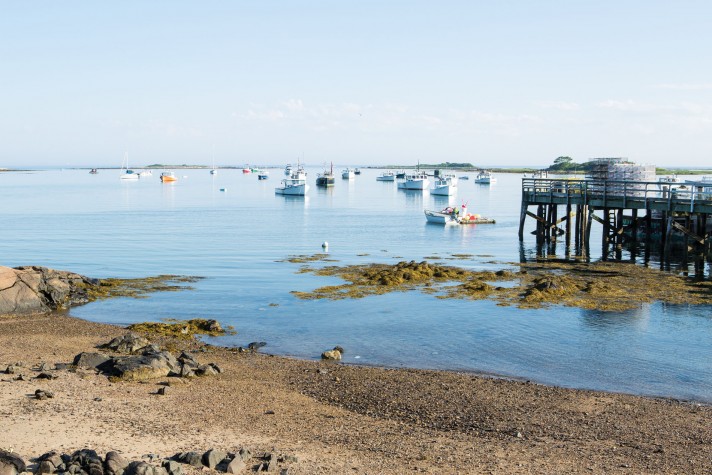 The homeowners don’t have a direct view of the Cape Porpoise harbor, though the water is nearby—just behind the homes across the street. 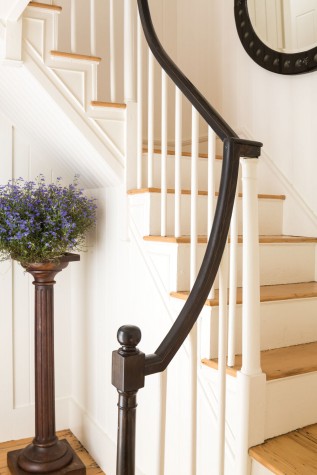 The stairwell is original to the house. 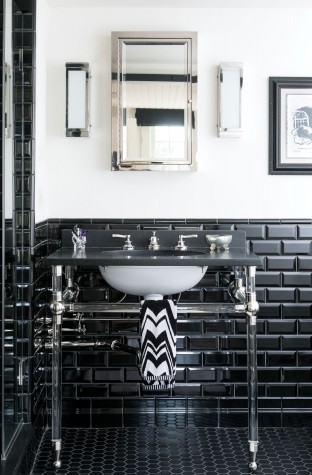 An upstairs bathroom with black tiles from Waterworks and sink and fixtures from Restoration Hardware. 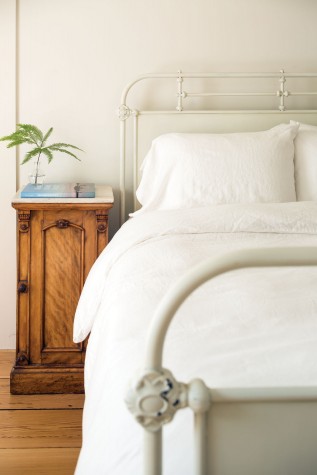 A guest bedroom with an iron headboard and linens from Restoration Hardware. The night table is from Antiques on Nine in Kennebunk. 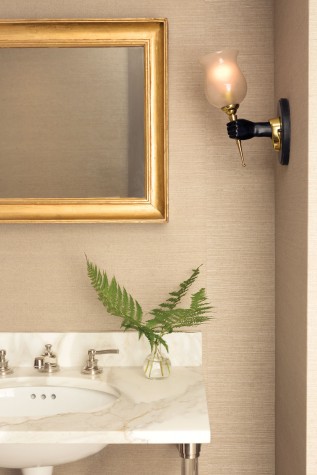 A powder room with a nineteenth-century gilt-framed mirror and French sconces from the 1940s. 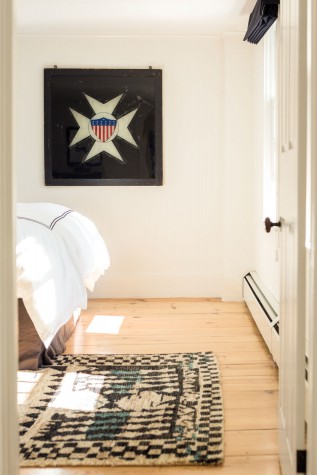 A corner of the guest bedroom with a work of art painted on glass. 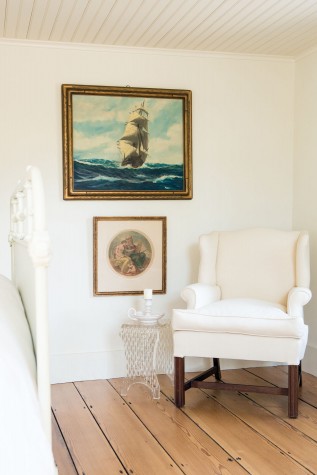 A white wingback chair next to a blue painting of a ship and an Italian print. 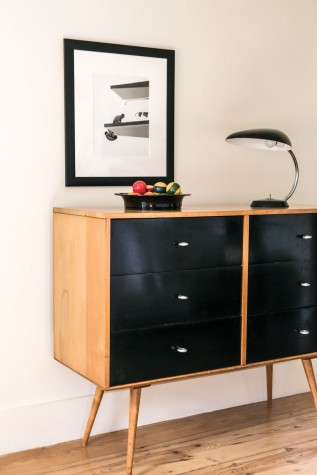 A dresser by Paul McCobb from Corey Daniels Gallery sits below an image of a diver by photographer Pablo Alfaro, which he gave to the homeowners as a gift. 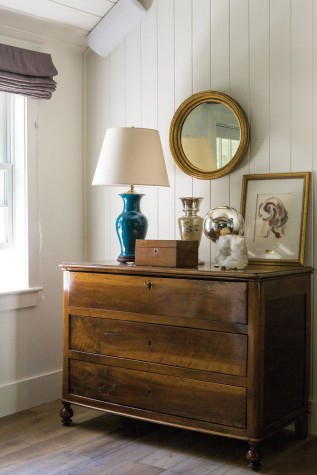 The dresser is a chest of drawers the homeowners found in Parma and subsequently sold to a client. Years later, when they saw and admired the chest in that client’s house, she gifted it back to them during a redecoration.

A couple balances their sunny Miami Beach life with a swanky, stylish colonial in Cape Porpoise

One day, a developer friend called Steve Oraham and Jim Samson at their Miami Beach home to say he’d found a “great house in Cape Porpoise and you’re really dumb if you don’t buy it”—a bit of exhortation that was a joke (in its putdown) but earnest enough. “He was probably sick of us staying in his house,” Samson opines. More joking. But the truth was he and Oraham had been coming to the Kennebunks for 20 years, so owning there made a certain sense.

The house their friend had in mind for them was a Cape Porpoise colonial, a post and beam built in 1760 with two rooms downstairs and two rooms up, a modest space made grander by the addition, in the mid- 1800s, of back rooms and a connected barn. Oraham and Samson purchased the house but eventually felt, if not buyer’s remorse, some real anxiety about what the property required. The front part of the house had been divided into two apartments, the floors were caving in, shutters were falling off the exterior, and the heating system consisted of three potbellied stoves. Being designers themselves, Oraham and Samson were no strangers to substantial rehabs. (They own Orson Design Group in Miami Beach.) Even so, Sarah Steinberg of Steinberg Custom Designs in Cumberland remembers reassuring Oraham at an early walk-through: “It’s OK. I can do this, and I can see it.” What she could imagine, and what she,the homeowners,and builder Kevin Lord of Kennebunkport’s Thomas and Lord would eventually produce, was a shored-up home with the many rooms that formed the back part of the house converted into a single great room with cathedral ceiling and exposed original beams. The front house remained largely intact: The four rooms from the 1700s were converted into three bedrooms and a living room, and bathrooms were added to allow each bedroom a measure of privacy and to create a downstairs powder room. The old white pine-board floors and original front staircase were preserved. The only addition was a screened porch, which Kennebunk architect John W. Einsiedler says he designed to “wrap up the house.”

The project required a crane to lift off the entire back roof of the house so Lord could replace beams that had rotted, pour a foundation where there had once been rubble stone, install radiant heating under a pre-engineered white oak floor, and add a wood- burning fireplace. The latter was a priority for Oraham and Samson, as they wanted to visit in the fall for Thanksgiving and in the winter for snowy weekends, but also because they viewed the fireplace as a starting point for the home’s aesthetic. “I didn’t want a typical, happy-Fourth-of-July summer house,” Samson says. “I wanted a moody, edgy feeling.” And, indeed, the home  seems less like a sunny Maine vacation cottage than a low-lit, swanky establishment combining period details and antique furniture with stylish, midcentury modern touches.

Black is the surprising predominant color, inside and out. The exterior is painted Sherwin- Williams’s “Squid Ink,” a black with a gray-blue undertone. It’s sufficiently unusual that Lord has received calls at his offices by several people inquiring about the color, and others have knocked at Oraham and Samson’s door to ask. Originally Samson had thought of painting the house a chocolate brown, but the couple’s best friend, a production designer in Los Angeles, said, “If you are going to do it, just take it all the way.”

They took it all the way inside as well.

The kitchen, which dominates one end of the great room, has flat-panel cabinets that Samson describes as being “between black and elephant gray.” Even the refrigerator has black flat panels; stainless steel is at a minimum. “I just wanted a backdrop of this color,” Samson says. At the other end of the room, the fireplace’s bricks and surround are painted black. The floor is finished with a gray wash. Furniture and shades are brown or gray, such as two French art deco chairs covered in a gray mohair. White walls and white V-match paneling between the old ceiling beams keep the room from getting overly dark. Upstairs, one bathroom is tiled all in black; another is black and white. A bedroom comforter is white with black frame detailing. The effect is subdued and elegant, the palette of the design letting the eye catch on unusual features—the zebra rug in the family-room area of the great room, the metal mesh that is used in place of glass for a large kitchen hutch door, a gold ball that is the top of an old flagpole from a defunct Maine car dealership, and two red cotton velvet chairs in the living room. (The latter, purchased from Corey Daniels Gallery in Wells, feel like movie theater chairs and sit, appropriately enough, facing a TV screen, which has been incorporated into a built- in bookcase fashioned by Thomas and Lord.)

“You have to mix high and low. That is the whole trick,” says Samson, and by that he means, in part, that you have to mix original finds with things that you might discover at a favorite store. For instance, the dining room area of the great room has a rosewood Saarinen table with a black base and Eames chairs from Design Within Reach. Elsewhere, upholstered sofas and chairs are from Restoration Hardware. Meanwhile, a 1900s sideboard is from Antiques on Nine in Kennebunk, and the midcentury chairs of rosewood and black leather are from Carboni Antiques in Wells. A lamp made of a candlestick holder was fashioned by Smith- Zukas in Wells. “It’s like 1stdibs.com right here in Kennebunkport,” Samson says of the array of local antiques options he’s found. That said, some pieces come from his more far-flung travels. Oraham and Samson bought a chest of drawers at a flea market in Parma, Italy. They once owned an antique shop in Miami, and after living with the chest for years, they sold it at the shop. Later the woman to whom they’d sold the piece was moving into a new apartment, which she wanted Oraham and Samson to decorate. Seeing the old chest, Oraham and Samson expressed interest, and the woman gifted the chest back.

Outside, Ted Carter of Buxton’s Ted Carter Inspired Landscapes helped reshape the grounds. The “utility” part of the grounds (the driveway and parking area) were moved away from the immediate side of the house and replaced by gardens and entertaining areas. The result, as Carter says, was “a more gracious approach to the house,” and a clear delineation between where cars sit and where people live, thanks to a picket fence interwoven with hydrangea. “Ted really changed the house,” says Samson. “It became a garden house— before, it was a house with a driveway next to it. He is responsible for the rolling hills and the gravel driveway to the barn.”

Carter talks about his own work in spiritual terms: the fencing “is adorned with the sacred feminine,” he says, which is his description of the plant material, and he speaks of healing the land after the violation of breaking up existing ledge and restructuring the ground. He applies this sort of language and thinking to the entire Oraham and Samson project, which he sees in light of their life in general. Miami is all about sun and light and going outside. “It’s yang,” Carter says. In Maine, the couple can be more internal. “When they come here, it’s cooler. It’s shadier. It’s more yin.” This makes the Cape Porpoise house not just a home but the very thing one might wish for in a life: balance. Balance that comes in a most appealing container. 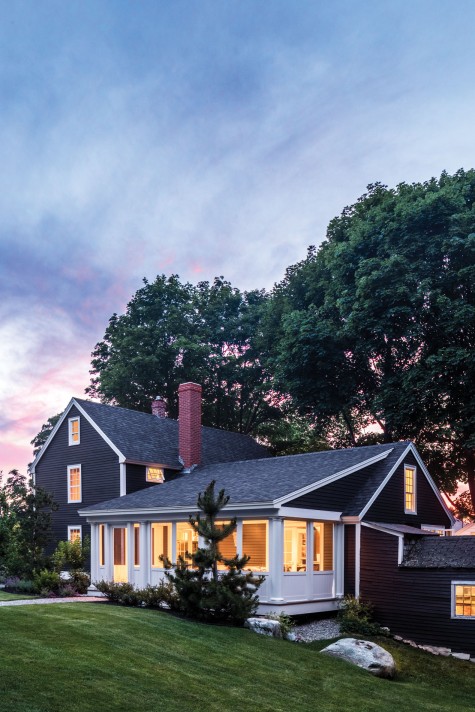 The front part of this colonial was built in 1760. The back part was added on later. The white screen porch is a twenty-first-century addition, part of a renovation that updated the entire house. 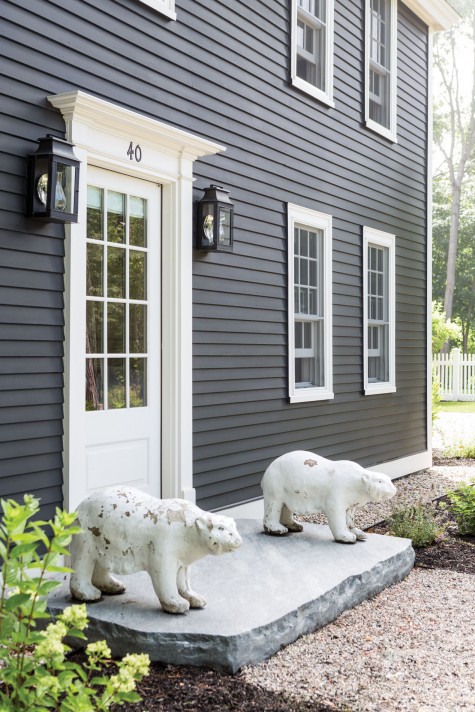 The polar bears in the front of the house are from Smith-Zukas Antiques in Wells. The exterior is an almost black Sherwin-Williams paint color called Squid Ink. 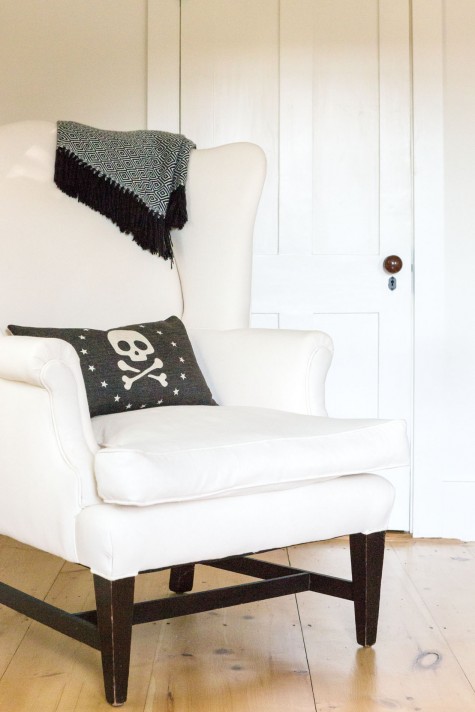 The skull and bones pillow was a housewarming gift from the friend who first convinced the homeowners to buy a home in Maine.