A creative couple gathers a team of professionals to build a home with design in every detail. 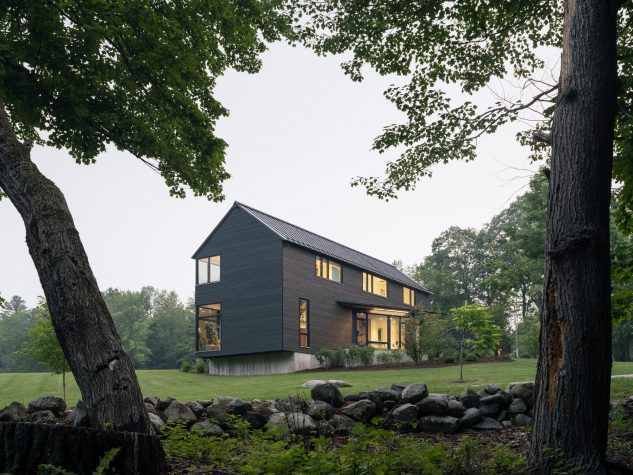 The home is a simple gabled form with some adventurous twists: triangular bump-outs at front and back, one end that hovers above the ground, and an all-black exterior. 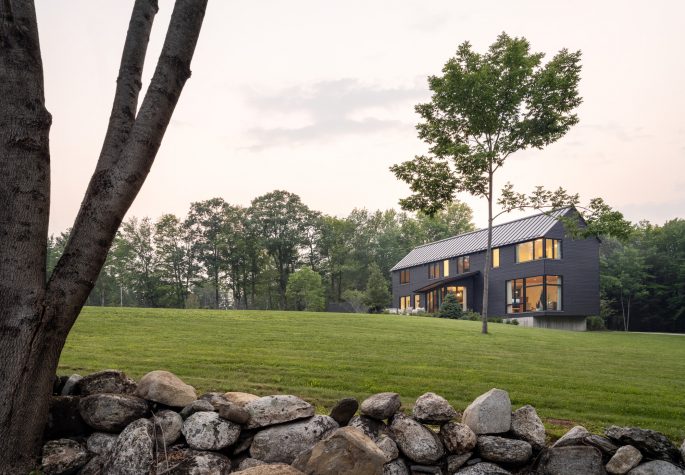 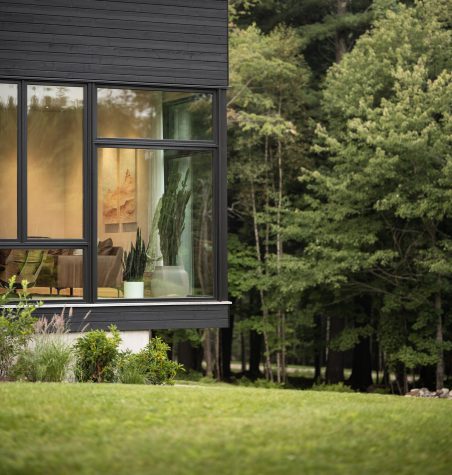 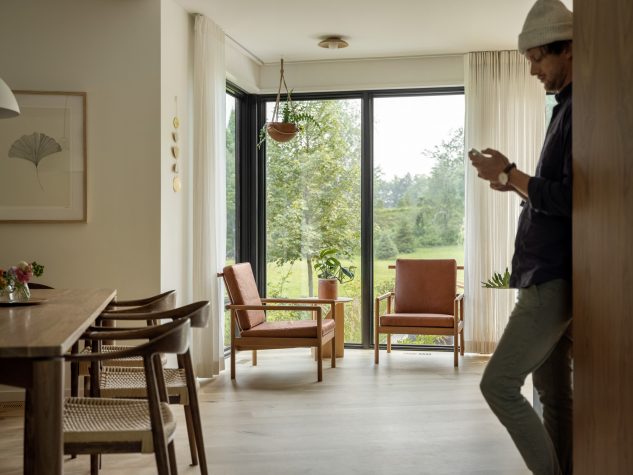 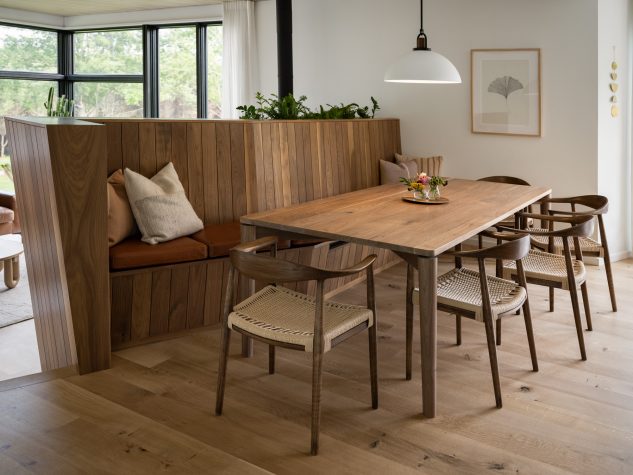 The back of the dining bench is also part of a plant wall that separates the dining and living spaces; Northe Woodworking crafted the table as well as the bench. 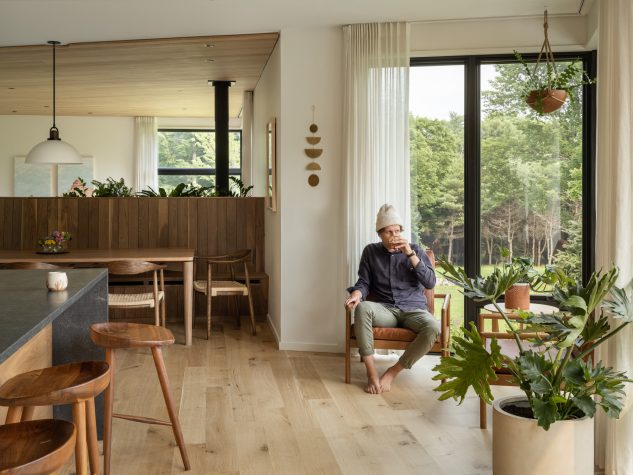 The kitchen offers multiple places to have a meal or a cup of coffee, including armchairs from Sun at Six and barstools from White on White. 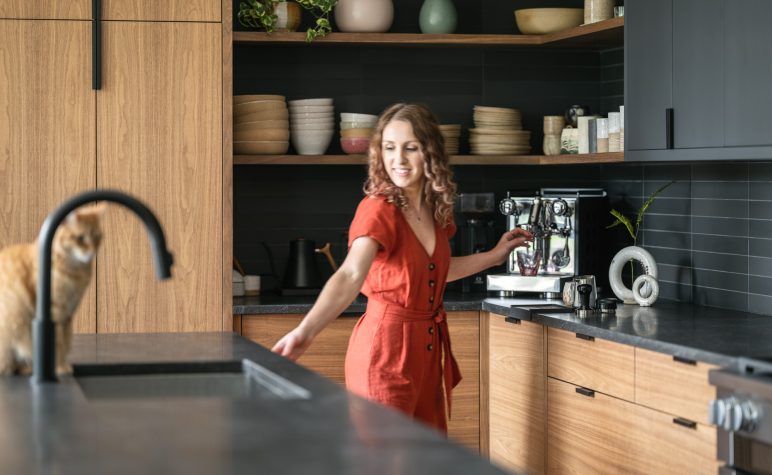 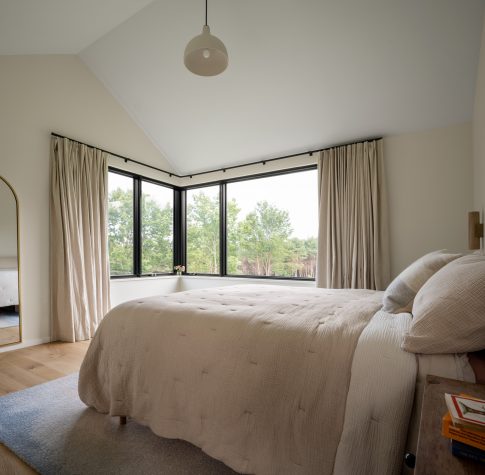 While most of the walls are painted in Farrow and Ball’s All White, the owners’ bedroom gets a warmer tone from Benjamin Moore’s Swiss Coffee, as well as from its linen drapes.

A few years ago, Stephen and Victoria Gilbert were living in a small townhouse in Auburn, near the offices of their branding agency, Anchour, while they looked for the right place to build their home. They had a good sense of what they were after; both Stephen and Victoria are trained and practicing designers. “I’ve always valued design and thought a lot about its influence on spaces,” says Stephen. “If I had to start over and pick something different, my career path might have been architecture.” As young business owners, “work was life, life was work,” he says. “Our goal was to buy a beautiful piece of land somewhere on a dirt road where we could have gardens, maybe animals.” And they found one. A 13-acre parcel of wooded land in Stephen’s hometown of New Gloucester fit the bill. It wasn’t for sale, but the owners were willing to part with it. For the two design enthusiasts, the fun part was about to begin.

But they couldn’t do it alone. “We knew what we wanted, but not how to accomplish it,” says Stephen. What they did know was whom to ask for help. The Gilberts had worked with the architecture firm Caleb Johnson Studio and the landscape architects at Richardson and Associates as clients, and they engaged the two companies to design the home and site. Then there was Chris Morrison, a longtime friend of Stephen’s; his company, Northe Woodworking, would do the millwork. Morrison brought in Josh and Jennifer Morrison of R.P. Morrison Builders and Morrison Design House, respectively (no relation to Chris). Together, the team created a striking home that exactly suits the Gilberts. It’s modern, minimalist, and design-forward, while harmonizing with the traditional homes in the nearby historic district as well as with the fields and woods of the property. It’s not too big for two people—“We use every area in the house on a daily basis,” says Stephen—but it can comfortably accommodate large parties; the Gilberts love entertaining. “I can’t imagine a better floor plan for the way we live,” says Victoria.

When you turn off a wooded dirt road onto the Gilberts’ driveway, you follow a broad curve around a stand of dark, cool mature forest edged with old rock walls. Then, as landscape architect Todd Richardson puts it, “You emerge into sunlight.” When the team first arrived on-site, he says, what is now the location of the house was covered with a neglected plantation of pines. “It took a little imagination to see that this area of the site could possibly be transformed to the place where the residence could be sited,” says Richardson. “It was important to position the house higher on the hill, which presented the formidable challenge of how to get there without simply plowing through the landscape.”

Now rolling green fields provide the backdrop for a dramatically dark house perched at the top of a knoll. The fields are shaped by what Richardson calls an “armature of existing stone walls, which became edges and boundaries.” The long driveway (with plenty of parking for friends) winds up to a simple black structure beside the house; it takes a second look to realize it’s the garage. “I hate the look of garage doors,” says Stephen; covering them with the same black spruce siding as the house provided a kind of camouflage. Bluestone pavers create a courtyard between the home and garage, merging into gardens of grasses, shrubs, and ferns that ring the home with meadow-like textures.

Aside from its black siding and minimal trim, the home reads mostly as a traditional gabled Colonial—with a few twists. At the edge of the knoll, “the foundation pulls back, and the end of the building ever so slightly floats over the landscape as the ground starts to roll away,” says David Morris, director of design at Caleb Johnson Studio. “It feels light. The house is an object, rather than something meant to fade and blend, but we didn’t want it to feel like it was dominating the landscape.” In addition to having one end hovering six feet above the ground, “There are modern angular pieces that jut out from the house and give it character,” says builder Josh Morrison. “I’m not sure what to call them—‘wings’ isn’t the right word.” Architect Bud Angst calls the glassy projections “triangular bump-outs”; Morris goes with “schnooks.” If the team members struggle with what these unique features are called, they’re clear about what they do. “On the entry side this glass box comes out to make an announcement as you come up the driveway; you know right where to go,” says Morris. “On the back side they give onto the garden and patio. They allow you to get outside the main volume of the house, into the garden, into the landscape, without leaving the house itself. They’re an opportunity to be in the landscape while you’re inside.”

The exterior’s effect of dark wood against natural greenery is carried through the interior. Northe Woodworking filled the home with walnut paneling and built-ins, often designed during late night hangouts. “Caleb Johnson Studios just gave us a fantastic slate,” says Chris Morrison. “From those plans, it was me and Stephen and Victoria having fun. He’d try to design things that were too challenging for me. And he failed miserably,” he laughs. “A contemporary home can accidentally come off as cold. Our largest desire was to sing a modern song, finding a way to make it warm and inviting.” The dining and living areas are divided by a walnut-sided bank of plants. “Plants are one of the first things they mentioned. Usually people talk about the TV or the grand piano,” says Angst. “We were looking for cool ways to integrate plants aside from pots on stands, in and around windows. When we were designing the banquette, we had a little bit of thickness to play with, and we came up with the idea for this plant wall. It perfectly matches the outside of the house, with darker objects in the middle of all this greenery and light.” Throughout the home the floors are of white oak, which was also used on the living room ceiling and the stairway. “The finish on the oak is very clear, and matte, so that it looks like raw wood,” says Josh Morrison. “It feels very natural and earthy.”

Everyone who worked on the project emphasizes the creative energy of the team—clients included—working together. “It was an amalgamation of professionals working tightly and well with one another,” says Morris. “And it was great to work with clients who are other creative people, who understand what a creative process looks like—that design decisions are iterative, not linear. We don’t make a decision and move on; we’re constantly evaluating.” Even now, the iterations haven’t quite stopped. The Gilberts have lots of plans: more millwork, an outdoor kitchen, a barn, more gardens, more trees, maybe some chickens and goats. But they’re also enjoying their home, where they can gather their friends or be quiet and comfortable together, where the gardens bring new surprises every week. If the Gilberts express any disappointment, it’s only that the heady days of designing and building their home with a group of talented, passionate artisans have come to an end. “I wish we could do it again,” says Stephen. 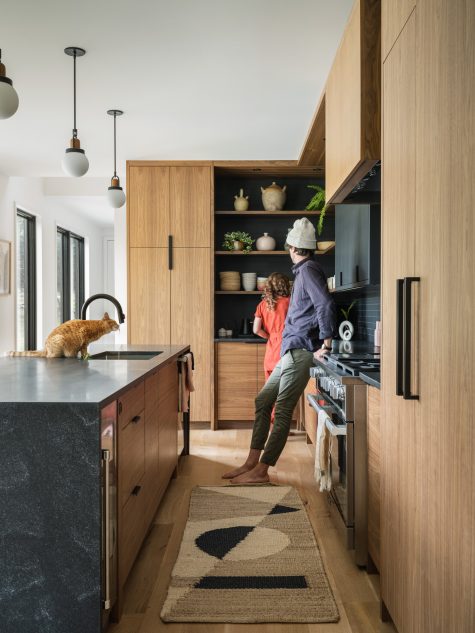 The kitchen features custom walnut cabinetry by Northe Woodworking surrounding a waterfalled granite island that picks up the dark slate color of the tiled backsplash. Open shelving features the couple’s collection of pottery, which includes some vintage finds as well as dishware by Portland’s Campfire Pottery. The pendant lights are from Allied Maker. 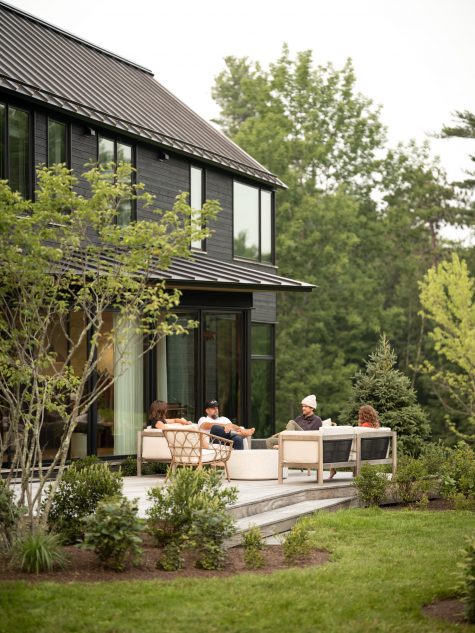 The back patio extends the home into the landscape, while broad windows bring the outdoors and its light into the kitchen area. 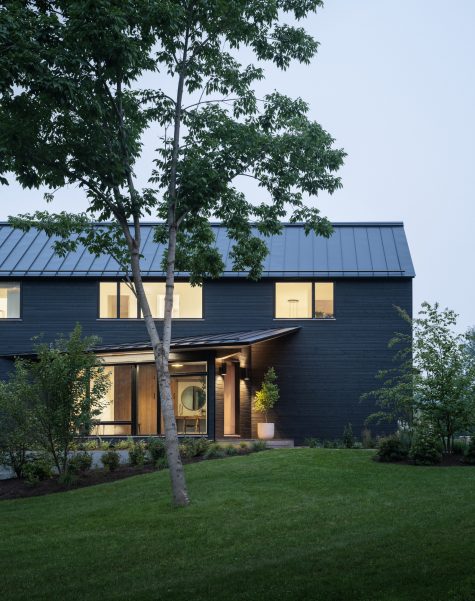 At the front of the home, a glassy triangle creates a welcoming entrance; a mahogany pillar brings warmth to the dark exterior. 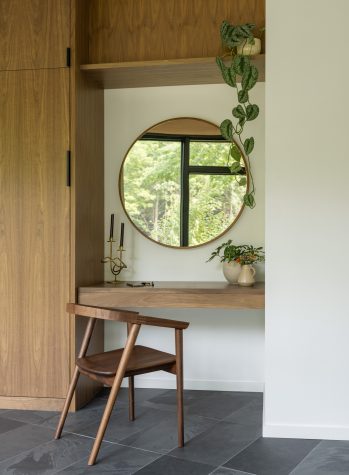 The entry has a durable slate floor and a nook perfect for writing notes (and checking one’s appearance) on the way out the door. 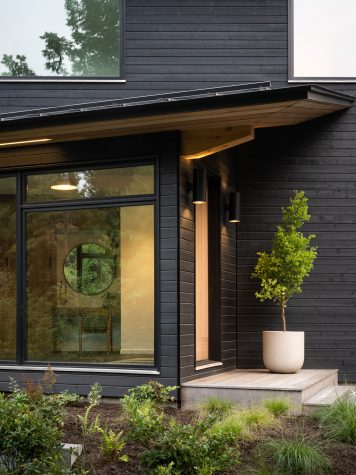 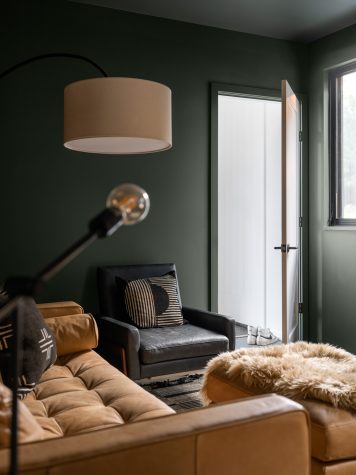 Stephen Gilbert’s home office has a moody palette that’s a step darker than the rest of the interior. 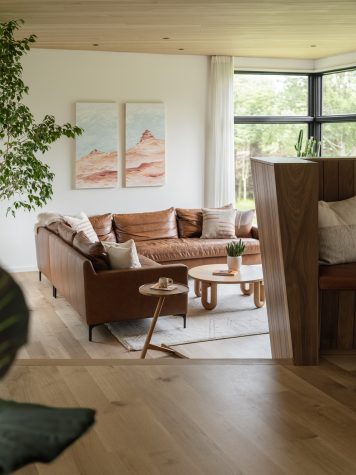 Stepping down into the living area creates a sense of separation from the kitchen and dining room while maintaining the first floor’s openness. The wall art was painted by homeowner Victoria Gilbert and her sister, Jessica Richland. The couch is from Interior Define, and the coffee table is from Hedge House Furniture. 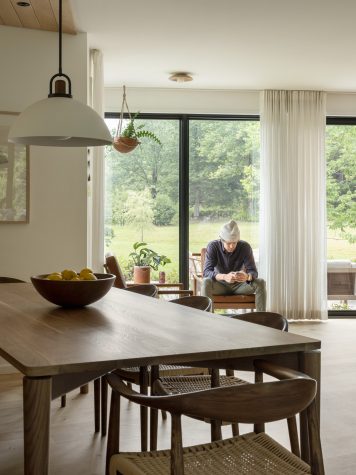 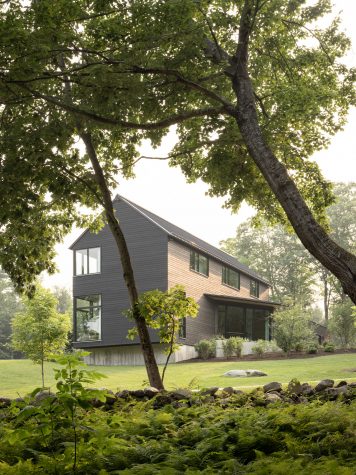 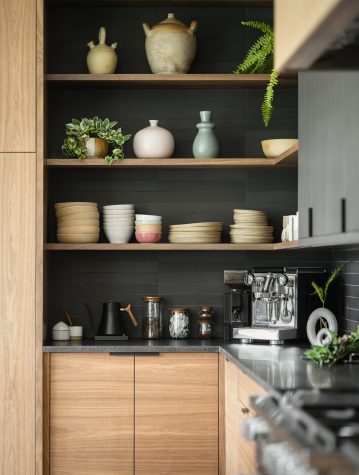 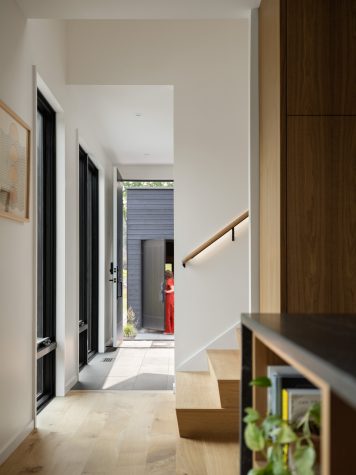 A view from the first floor across the patio reaches to the garage, which is sided in the same Maibec spruce as the home. 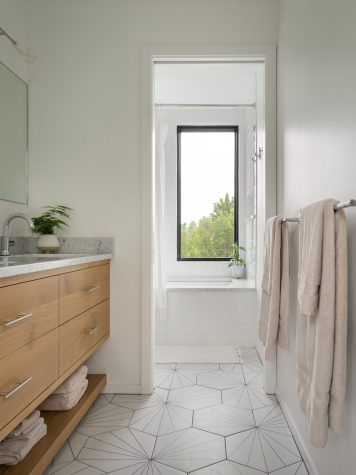 The guest bath is bright, with a Carrara marble vanity and floors covered in hexagonal cement tiles from Clé. 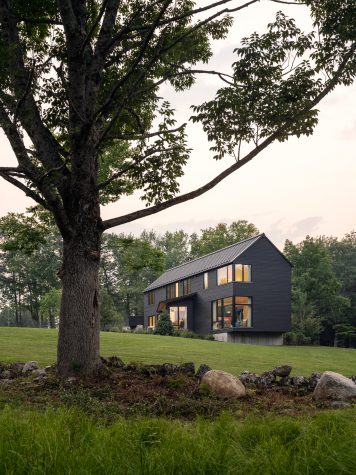 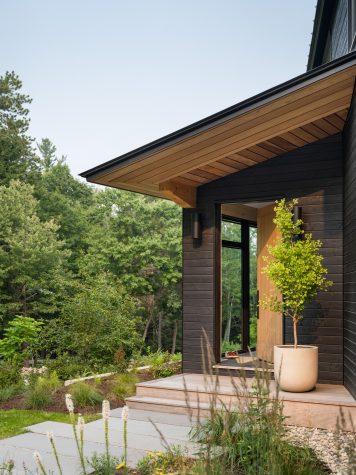 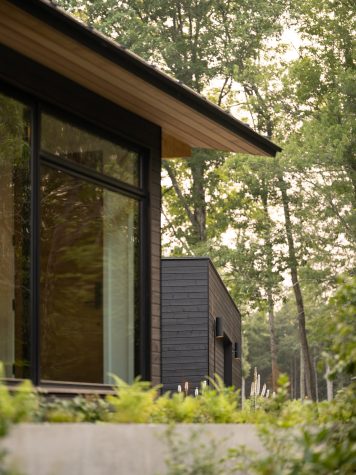 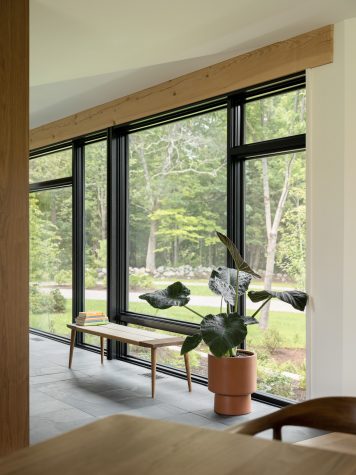 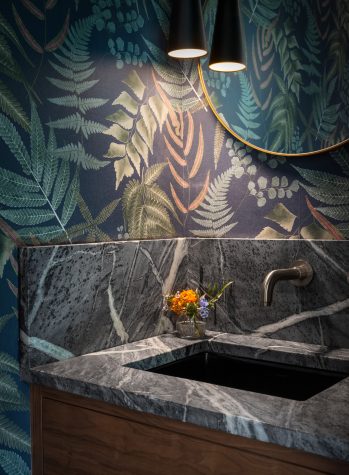 The dramatic wallpaper from Graham and Brown in the powder room echoes the home’s theme of greenery against a dark backdrop. 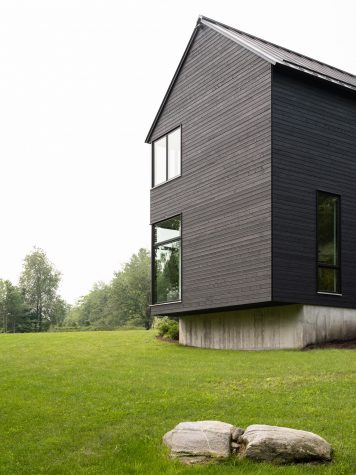 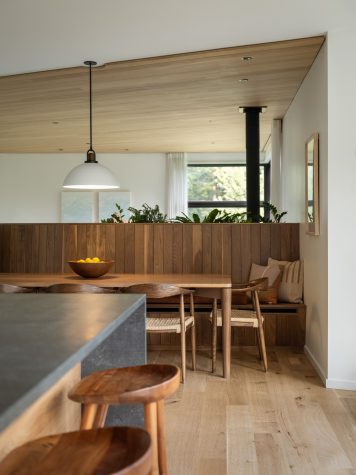 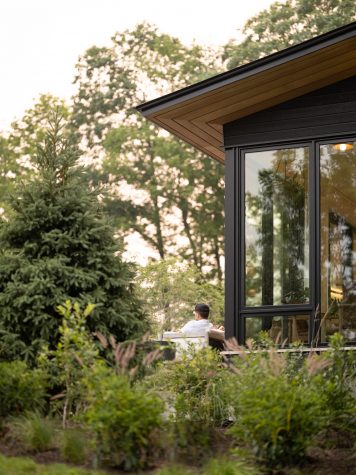