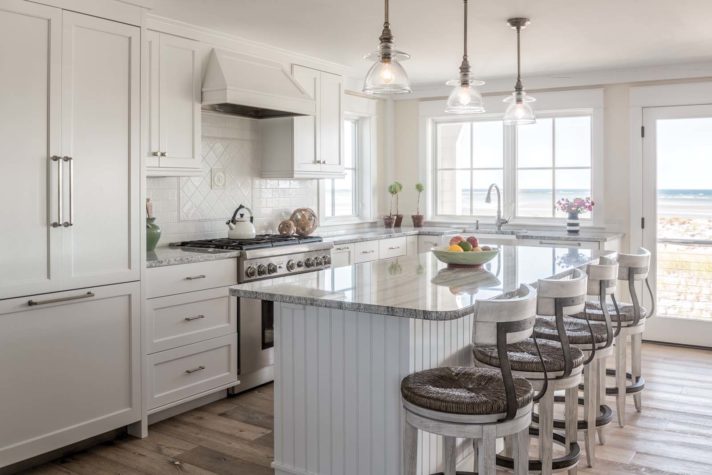 To give the kitchen of Rob and Jane Garvey’s Kennebunkport home a cottage feel, kitchen designer Dina Lennon of Sylco Cabinetry used white beadboard, backsplash tile, and appliance covers. Light granite for the countertops plays off the natural gray of the sand outside. Hidden away are custom drawer dividers and specialty pullouts. The woven wicker and antique white stools are from Lexington Home Brands. 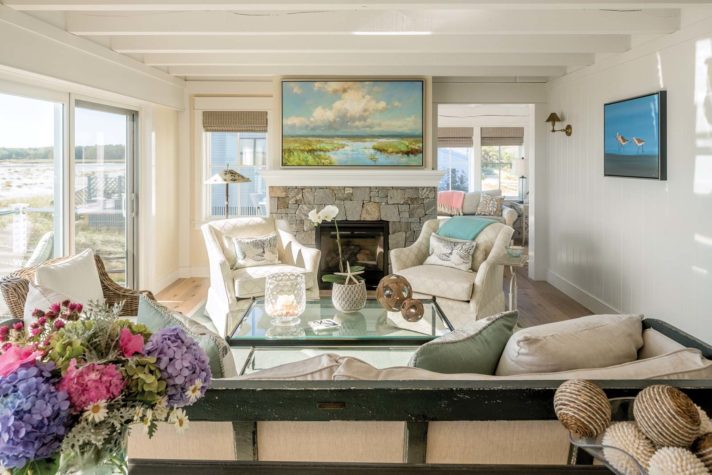 A view from the kitchen to the fieldstone surround for the gas fireplace shows how the living room combines contemporary, antique, and reproduction pieces. Behind the living room is the den. The existing wood beams were once stained dark but are now white to lighten the room. Some of the items in the house (including the painting of sandpipers to the right) are from the Garveys’ previous home. Interior designer Louise Hurlbutt found the painting above the fireplace in her travels. 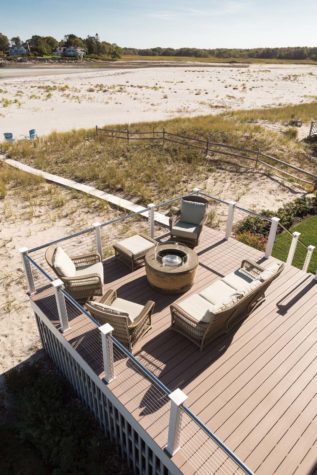 The fire pit and wicker on the deck are from Lloyd Flanders. 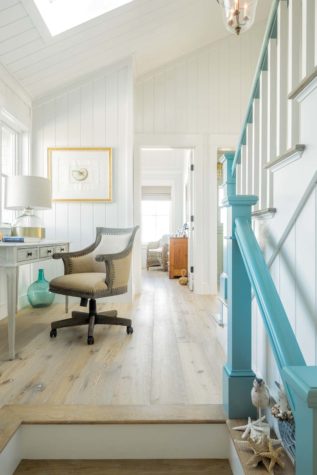 The second-floor landing also serves as an office. The walls are V-match, and the vaulted ceiling with a skylight floods the space with light. The floor is engineered European oak. 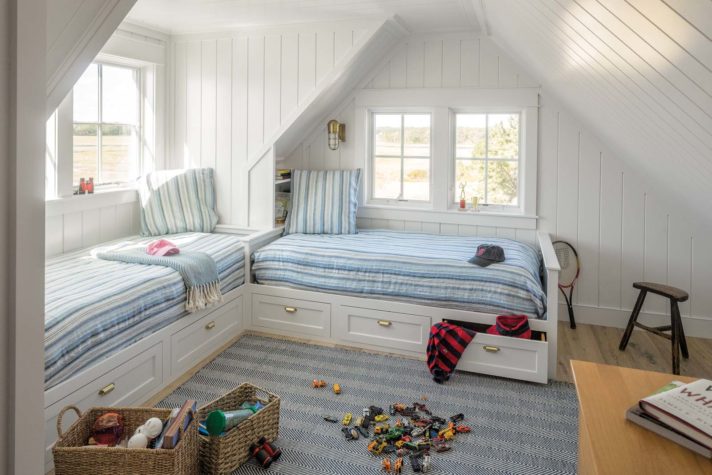 The bunk room, which is hidden under the eaves, has striped linens from Pine Cone Hill. 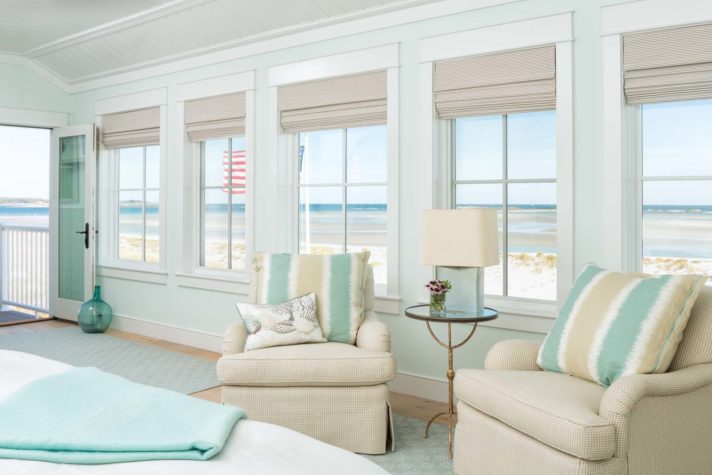 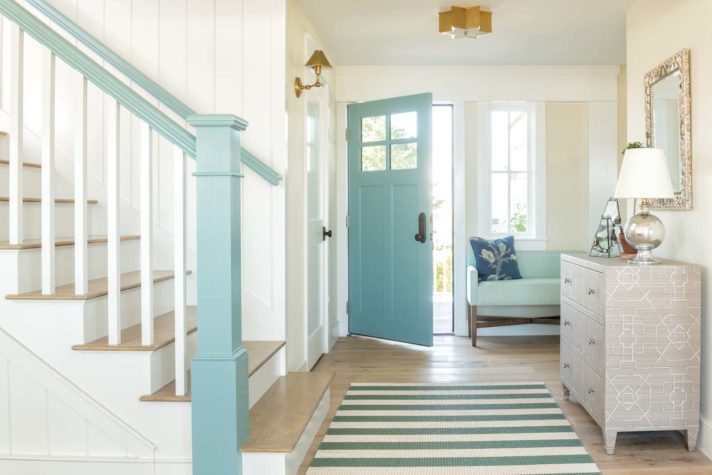 The front entry hall has a grasscloth-wrapped Thibaut chest. Given the neutrals in the first floor’s finishings and fabrics, Hurlbutt decided to go with bolder color on the handrail and newel. 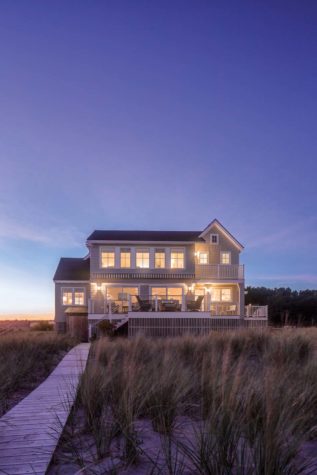 A view from the water back to the house shows windows dominating the water-facing side of the house. 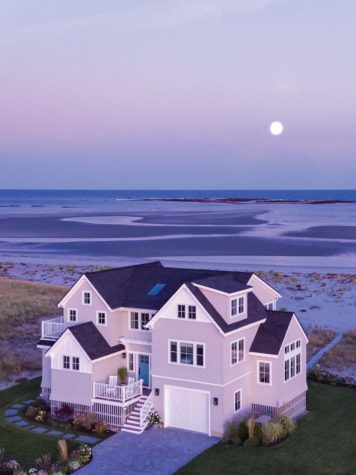 An artful solution to a 3-D puzzle

“What would you do if I told you I had fallen in love with a color?” writes author Maggie Nelson at the start of her quirky book Bluets. Part emotional memoir and part philosophical inquiry, the slim volume published in 2009 is a meditation on the color that, studies show, people favor over every other. On the coast, blue is also the go-to color of designers who want to bring the outside in. Louise Hurlbutt’s many years of designing homes in the Kennebunks has made her a real master of the hue, in all its moods. When she went to design the home of Jane and Rob Garvey on Goose Rocks Beach in Kennebunkport, she knew the nautical crispness of a predominately navy and white interior, or the patriotic vigor of such a home with red touches, would not be right. Although Rob was retired, Jane was still working, and the couple’s professional lives were high stress. They wanted their vacation home to be unfussy and relaxing. “We started with a calm palette,” says Hurlbutt. “Aquas and beiges, making it very restful.”

The palette also makes the home very much a piece with the outdoors, as Goose Rocks has a beach so wide at low tide that one can walk from the Garveys’ house to a Cape Porpoise peninsula called Marshall Point and to the coast of Timber Island, whose 13 acres are part of the Rachel Carson National Wildlife Refuge. Given all that sand, it seemed right to visually pull neutrals and grays into the house as well as the blues of the sky and ocean.

That first floor has a European oak floor that was wire-brushed and whitewashed to suggest driftwood, as well as gray and white granite kitchen countertops and light-oatmeal-colored upholstered pieces. Rattans, ropes, rushes, and wickers were chosen for furniture elements, such as the seats for the antiqued wood kitchen stools, and accessories, such as a mirror frame and a decorative nautical monkey claw that serves as doorstop. At the edge of spaces, Hurlbutt introduced bolder colors. The living room walls have two paintings, one a landscape, the other featuring sandpipers on a turquoise background. Medium- value aquas appear at the front door and the foyer’s staircase newel. Lighter values are on the sisal-like living room rug and decorative pillows in the owners’ bedroom. Deeper blues serve as an accent throughout the house, as in the dusty blue animal-print fabric on a bench that serves as the den’s coffee table. Upstairs, the use of minimal color continues into an owners’ bedroom with a light-cornflower raffia-upholstered headboard. The guest rooms tend toward bolder blues and whites with occasional grays in the linens.

A second design tendency mixes antiques and reproductions (such as a faux-finished wood-framed sofa) with contemporary items (such as a long, industrial- style dining room chandelier whose bronzed wrought iron makes five loops around five glass lamp shades). Yet a third design tendency is for cottagey touches such as white V-match paneling for many of the walls and beadboard for the powder room wainscoting and select areas of the kitchen, which was designed by Dina Lennon of Sylco Cabinetry. The first floor’s ceiling beams, originally stained dark, were painted white, which visually lifts the ceiling.

Architectural designer Erik Peterson and builder Jonathan Trudo—of Peterson Design Group in Kennebunk and Portland and Creative Coast Construction in Kennebunkport, respectively—found the house a fun challenge. “I like to solve puzzles,” says Peterson, and Trudo echoes him when he says, “The good thing about projects like this is that there are tons of things to solve. I love that.” The tricky issue was matching the Garveys’ desires with a handful of unavoidable constraints. When the Garveys bought their lot in 2015, it had a timber-frame house with small rooms, a staircase on the ocean side of the house, and a black woodstove in the center of the living room, all of which obstructed views. The plan was to renovate, not rebuild, adhering to firm regulations concerning sand dune protection, setbacks, and allowable height and footprint. The Garveys wanted a clean, easy-to-maintain, light-filled, open-plan house, where you look through the house from the front door and see the ocean. Because they planned on year-round use, they also wanted an office for Jane and a garage. A final challenge was to attach the old structure to new steel framing to prevent the house from swaying in high wind.

To make all this work, Peterson devised a garage at street level, and then a switchback interior staircase to create a multilevel house instead of two parallel floors. The first floor was gutted and the second floor removed so the builder could start all over. (Trudo also lifted the entire structure to repair the piers on which it was built.)

In the new layout, the dining room is on one side of the kitchen, the living room on the other. A small den adjacent to the living room provides a separate space to watch TV or read a book. Large windows line the ocean side of all the rooms and continue around the house to reveal the street views, which are of an extended marsh and river. A guest bedroom and bath is halfway up the staircase. “In most beach houses,” observes Peterson, “not every use has its own room.” On occasion, some form of doubling up is necessary, as with the second-floor landing, which also serves as an office with a vaulted ceiling and skylight. The owners’ bedroom and bath stretches the length of the house and offers broad views of the ocean. Even the shower has a window. Light blue glass shower tiles and a basket-weave tile floor (of Carrara marble and the lightest of blue glass) maintains Hurlbutt’s color scheme. The second floor also has an additional guest bedroom. Up one final level is a bunk room with two built-in beds with drawers underneath, for grandchildren. Almost every space (up- and downstairs) has some sort of exterior balcony or porch with stainless- steel cabling.

From outside, the gray shingle house has multiple gables, all facing in different directions. Peterson says the house is, in fact, not all that complex, and the rooflines are “responding to the spaces below.” Peterson kept things fresh and bright with white trim and white shingling underneath the facade gables.

The Garveys acquired their confidence in Hurlbutt, Peterson, and Trudo from first working with the trio in 2000, when the group collaborated on a major renovation on a different house the couple had owned on Kings Highway, which is the street on which the current house is located. Because that first house—originally bought in 1981— was on the land side of Kings Highway, the Garveys were happy to have the chance to purchase property directly on the ocean. The couple had a lot of faith, Jane says, in the team’s “ability to capture what we love” once again. Contemporary author Maggie Nelson ruminated on blue, but the color has been favored for centuries. In the case of the Garvey home, perhaps the Victorian art critic John Ruskin said it best: “Blue color is everlastingly appointed by the deity to be a source of delight.” 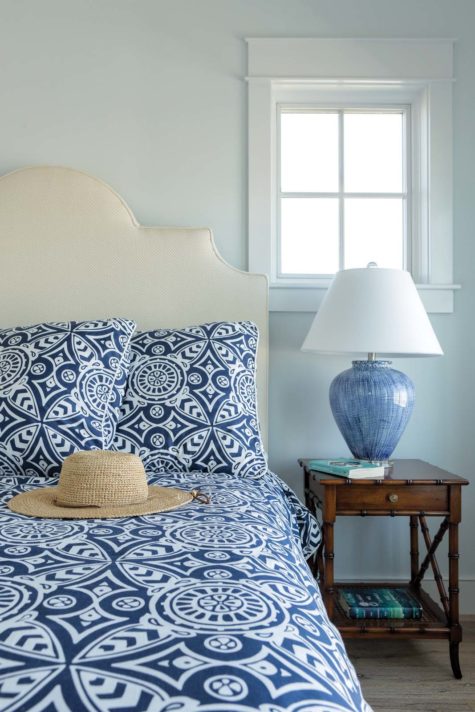 A guest bedroom with a blue and white coverlet, an upholstered bed frame from Stanley Furniture, and a lamp from Hurlbutt Designs in Kennebunk. 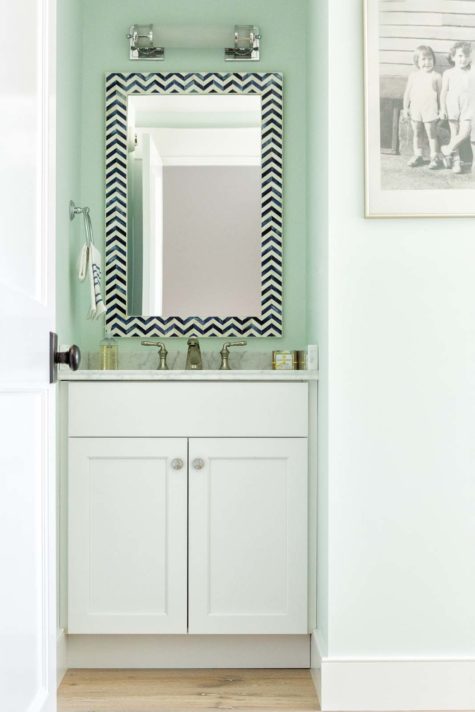 The black and white mirror in the sink area off a guest bedroom is from India and made of bone. 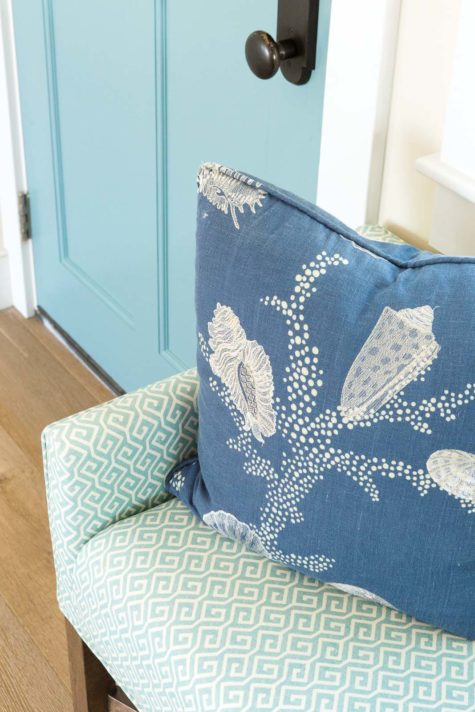 A pillow on the foyer bench has shell and coral Manuel Canovas fabric. 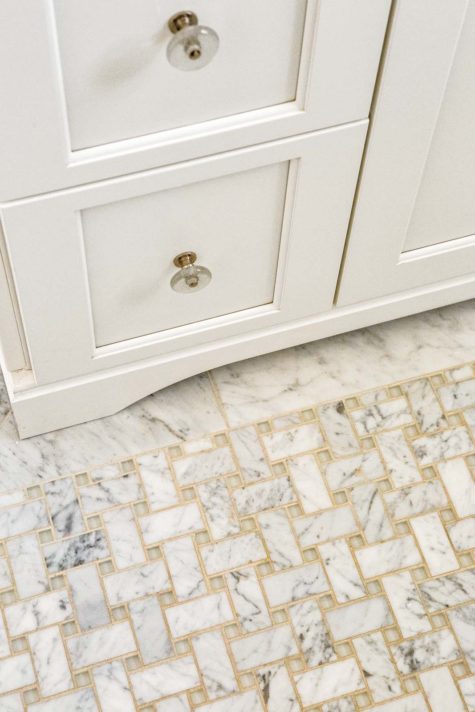