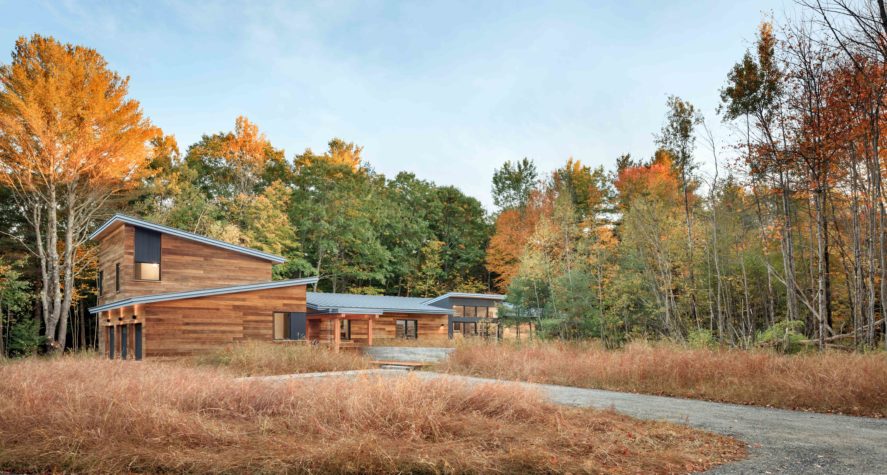 The long driveway curves away from the road, shielding the house from view and creating visual distance between the home and Kremer’s glass studio. 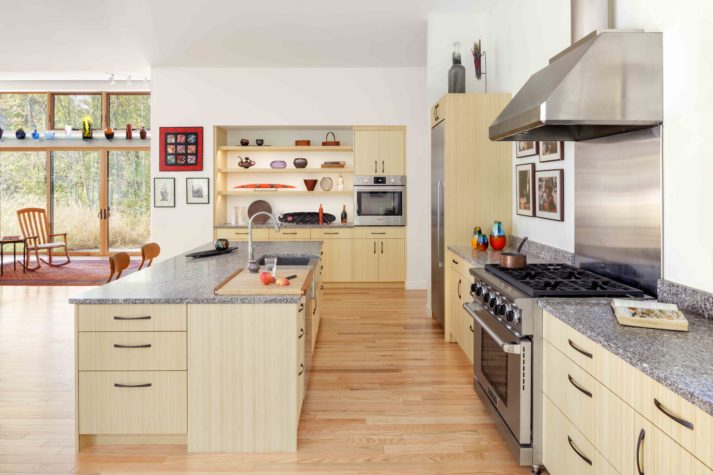 The kitchen countertops are made from Deer Isle granite, sourced from a quarry near the couple’s favorite vacation spot. 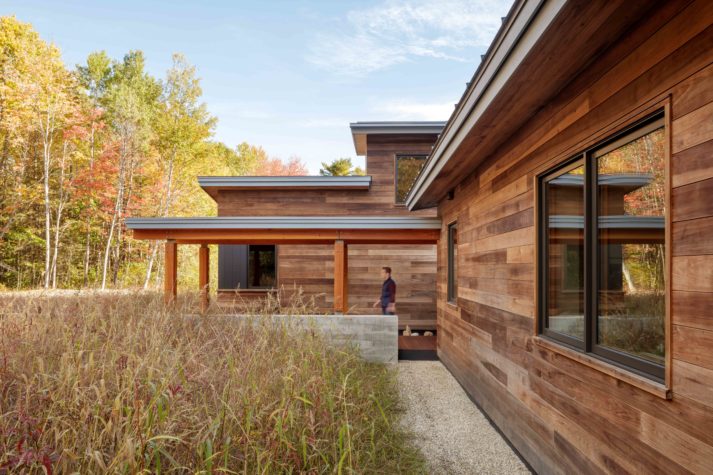 Hepburn made sure that the sun can shine through the windows, no matter what the time of day. During the early morning, sunlight pours into the living room and bedrooms, and later in the day it lights up the dining area. 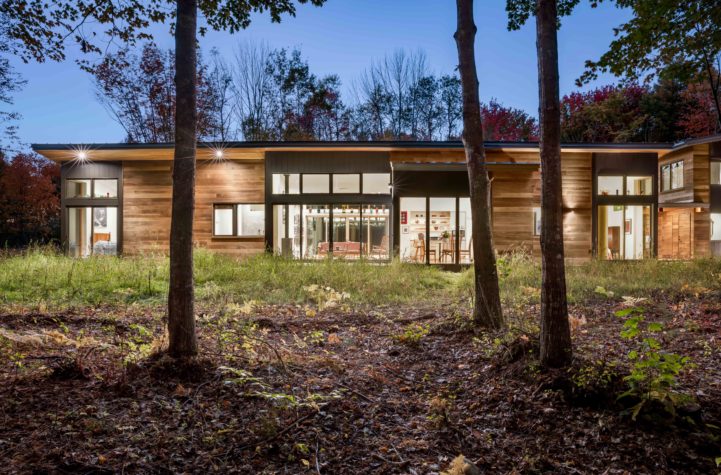 Hepburn wanted to create a sense that the house is connected to the outdoors. The large windows allow viewers to look directly through the home and into the landscape beyond. The siding is made of eco-friendly Cambia boards. 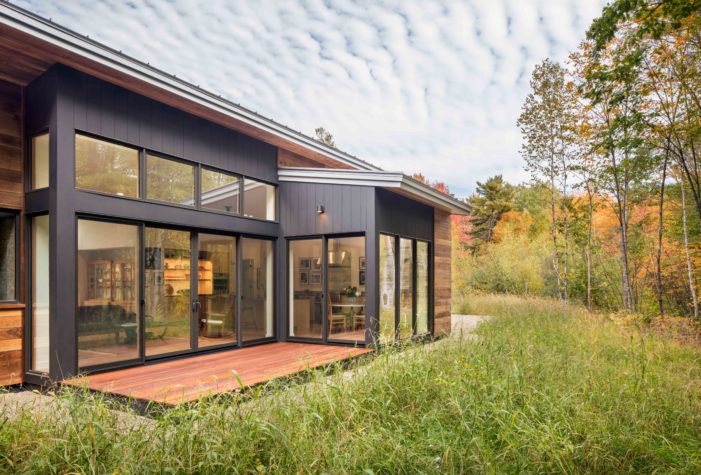 The couple decided to do minimal landscaping, and they took down few trees. Soon, they hope to put in a dock so they can kayak up and down the Royal River. 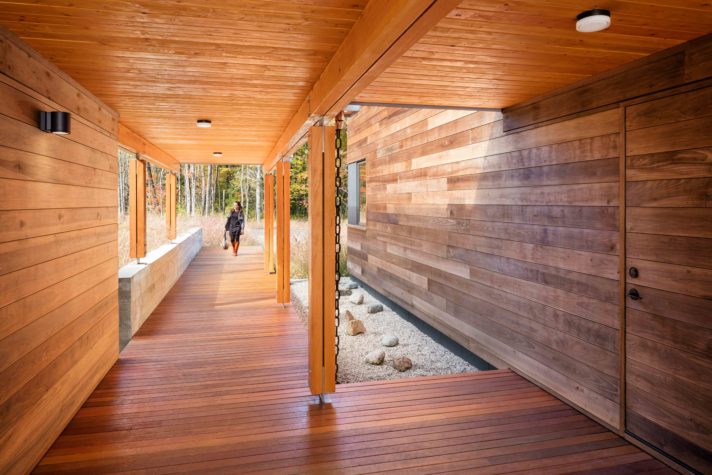 Homeowners Martin Kremer and Barbara Merson adore their spacious porch and front entryway. On the left is a separate guest apartment with a kitchenette, and on the right is the main house. 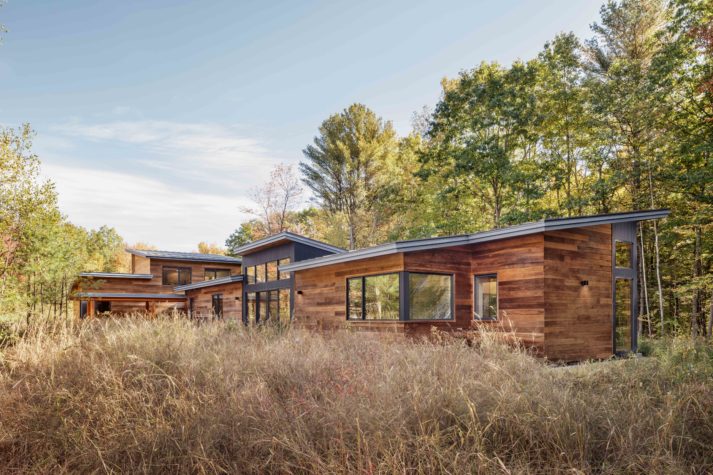 Designed by Harry Hepburn of Briburn in Portland and built by Taggart Construction of Freeport, this contemporary house on the Royal River blends into the surrounding woods and fields.

You can’t see Martin Kremer’s studio from the road. You enter the driveway, which curves and swoops through the woods until, suddenly, you find yourself at the “auto court,” as landscape designer Soren deNiord describes it. This is where Kremer’s Maine College of Art students park when they come to work in the studio, learning how to fuse, polish, and shape glass from the awardwinning artist. And this is where I leave my car to begin the short walk to Kremer’s contemporary, eco-friendly house.

As I approach, the artist’s house reveals itself slowly. It was intended to sink into the summer landscape and blend seamlessly into the native trees. Surrounded by wildflowers and bushy rows of lavender, the wood-sided structure rises and falls under a series of asymmetrical rooflines. It’s set back into the woods, just 50 feet from the Royal River, where Kremer and his wife, Barbara Merson, hope to someday go kayaking. (“We plan to put in a dock soon,” Kremer reveals. “We have a lot of plans.”) Although the studio and the home are two distinct buildings, they feel united, thanks to architect Harry Hepburn’s thoughtful use of materials and echoing forms.

Designed by Hepburn of Briburn in Portland and built by Taggart Construction of Freeport, the Kremer home in North Yarmouth was finished in 2016 after years of planning, budgeting, and balancing. Kremer and Merson had very specific goals for their Maine home: they wanted a single-floor home so that they can age in place comfortably, plenty of uninterrupted wall space to display their art collection, an energy-efficient heating and cooling system, and a strong visual connection to the natural world. While their budget meant they had to “compromise on a few things along the way,” says Hepburn, “we didn’t have to compromise on the performance of the building or the general aesthetics.” And aesthetics are important to both halves of this creative couple. Kremer is an artist with a defined visual sense and strong sense of color, and Merson serves as the executive director of the Maine Jewish Film Festival (she’s also recently completed her PhD). “We are lucky,” Merson says. “We tend to like the same art, furniture, and things. It made the decision-making process for the house much easier.”

“Our whole approach was to minimize the disruption to the existing landscape, which they [Kremer and Merson] loved,” Hepburn says. “We also thought a lot about the relationship between the studio and the house. We wanted to create visual separation, acoustic separation, and a sense of privacy between the two.” The studio is an educational space, which means it’s somewhat in the public realm, while the house is a purely private structure. The curved driveway, which veers down a hill and enters the three-car garage (located below the guest wing), helps keep the home from feeling like it’s too close to the studio. To keep things cohesive, Hepburn used similar materials on both structures.

“The studio is an inverse of the house,” he explains. “We wanted it to connect to the home without replicating it, so we used the same materials but in the opposite way.” On the house, they used unfinished Cambia wood siding (made from thermally modified poplar), which will fade over time into a soft, washed gray, paired with color-blocked areas of wood siding painted dark bronze. On the studio, they used wood siding painted the same dark bronze color, with highlights of prefinished shiplap siding to reflect the Cambia.

“We used very simple, natural, long-lasting, and durable materials throughout,” says Hepburn. “The dark bronze recedes into the forest, while the natural wood serves to highlight and make the house stand out. Our focus was on using natural materials and earth tones to give the house a strong connection to the outdoors.” Generous-sized aluminum-clad windows help further connect the inhabitants to their environment; even on the coldest days of winter, Kremer and Merson can walk barefoot on their red oak floors warmed by radiant heat and watch the cardinals feast at their bird feeder. “It’s a very tight house,” says Merson appreciatively. “If I turn on the exhaust fan and crack a door, you can feel it and hear it. It slurps up the air.”

Unlike their former home, a big and “very drafty” old building in Northern Westchester, New York, this house fits the couple just right. There is a guest room with a kitchenette over the garage and, in the main house, two bedrooms and two and a half baths. The bedrooms are a bit smaller than one might expect; the couple decided to trade sleeping space for cooking space. “Before we moved, we took inventory of the house and what areas we used,” Kremer says. “We wished that some of the rooms were smaller and that we didn’t have a dining room.” For Merson, the kitchen was always a top priority. “We love the space we have here,” she says of their open-plan kitchen, dining room, and living room combo. “In our old house, people would always gather in the kitchen. We have a little bedroom suite and a big kitchen area, because that’s where we want to be.” They chose Deer Isle granite for the kitchen countertops for “sentimental reasons,” says Merson. “We vacation there every year, and while there are other types of granite that look similar, we wanted to have some from that quarry.”

While they considered putting in polished concrete floors, the couple ultimately decided they liked the warmth and look of natural wood. The red oak floors pair nicely with the Douglas fir trim (“it picks up the warmth of the bronze and the Cambia,” says Hepburn), the bamboo cabinets, and their custom-made cherry furniture. They own several standout pieces that they had commissioned from Maine-based craftsman Louis J. Charlett for their New York home. When they moved to Maine, they wanted to bring their curio cabinet with them, as well as their cherry display case for Kremer’s intricate diorama of an eighteenth-century blacksmith’s forge (hand built by his Polish immigrant grandfather). Certain nooks in the house were created specifically to house these larger pieces. To provide further storage space for the couple’s vast collection of glass art, the builders installed glass shelves below the transom windows in the living room. “It was Marty’s idea,” Hepburn says. “During the day, the natural light illuminates the works, and at night, there is a light hidden in the trim that beams up from below.” During my visit, I find my eyes drawn repeatedly to the vases, urns, and sculptures, which glitter with green, yellow, and blue light as the sun dips in and out of the clouds.

This, too, was planned. Hepburn wanted to create a “strong relationship between the solar movement and the building.” As the sun moves throughout the day, it lights up first the living room and bedrooms. As it moves from east to west, light begins to pour into the dining room and the guest area. “At all hours of the day, the house is almost always lit by natural light,” says Hepburn. “That was critical to the way we designed the house and how we oriented it.”

Thanks to the surrounding forest, the light that filters into the house often takes on a greenish tinge in summer. In the winter, it’s clear, cold, and blue—ideal for viewing art. Whether viewed at the height of summer or in the depths of winter, the couple’s art collection is impressive. They have a bronze sculpture of Jonah and the whale and another of Jacob wrestling with angels. They have paintings inspired by ancient Greek myths and black-andwhite photographs of long-deceased family members. Their taste is eclectic, though they tend to prefer the minimalist lines of Japanese or Scandinavian design. In order to keep their art on continual display, the couple asked for a wider hallway than standard to act as a gallery space, plus a stretch of blank dining room wall to showcase a series of prints by Japanese artist Hasui Kawase.

They bought these pieces together, and like the rest of their possessions, they built the collection slowly over years. “Back when we first got married and we lived in the city, there was a tiny print gallery just down the block,” Kremer remembers. “We used to drool over those pieces. We bought one together for our first anniversary, and subsequent ones after that. At some point, we no longer needed excuses.” Grouped together above the dining room table, sandwiched between the wall and big glass windows that open out to the fields, the woods, and the river, these nature scenes serve as a testament to the shared joys of their long marriage. Their lives have been fruitful ones, and here by a river in Maine, they’ve built a place where their art can breathe and their hours can settle softly, like leaves onto the forest floor. 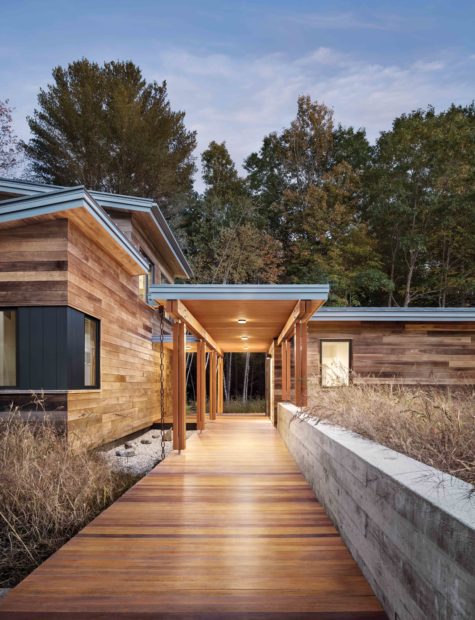 Built for artists with an eye to the future, this house prioritizes first-floor living so that the homeowners can comfortably age in place. It’s their forever home, and they are thrilled with how it turned out. 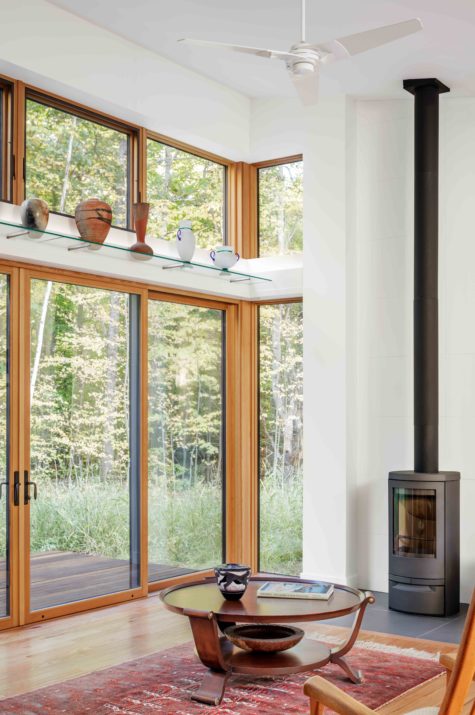 When they moved to Maine, the couple downsized, giving away much of their antique furniture and other goods. They kept all their favorite pieces. Their style skews toward minimalist and modern rather than ornate. 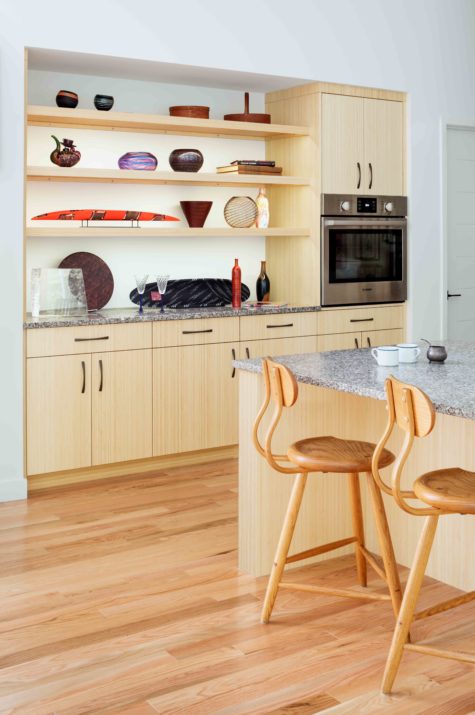 Radiant floor heating keeps the house cozy in the winter, and natural wood tones are used throughout the home to invite a feeling of warmth. 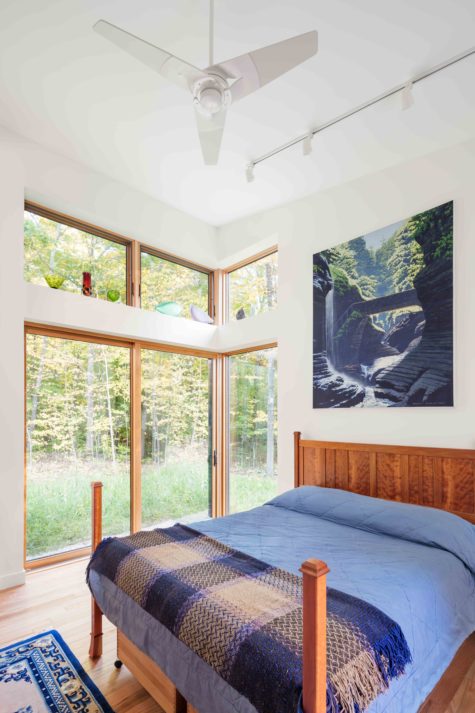 The owners’ suite features glass art high above the windows. Everywhere you look in the Merson-Kremer house, you’ll see paintings, sculptures, and gorgeous pieces of glass.