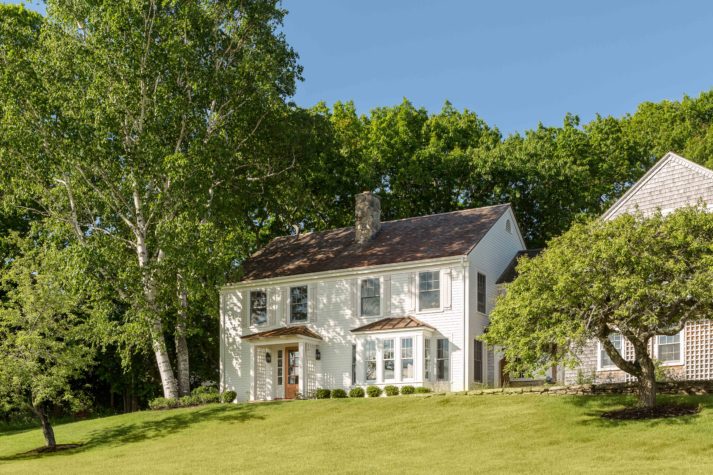 Nan and Sam Scott worked with Nicola Manganello of Nicola’s Home in Yarmouth and Tanner Maguire of Maguire Construction in Yarmouth to update their classic New England home. In the summer, roses climb up the trellises and hydrangeas bloom out front. 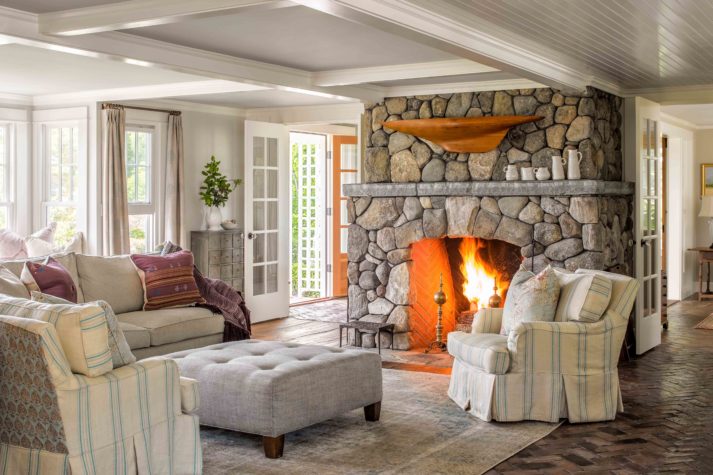 The living room was created to highlight the fireplace. When the Scotts first purchased the house, the first floor was made up of a series of small rooms. During the renovation, they opened up the dining room, living room, and kitchen, and painted the ceiling, which creates a feeling of lightness throughout. “The painted ceiling adds a subtle but pretty touch that changes throughout the day,” Nan says. 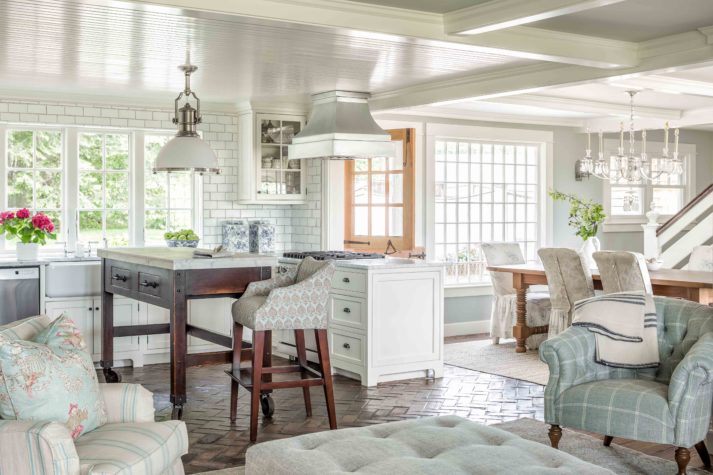 The Dutch doors were an original feature of the property, while the farm table-inspired island and the open concept are all new. 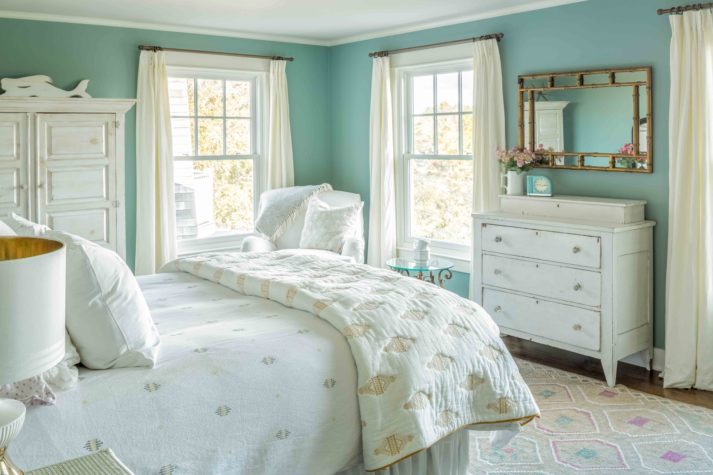 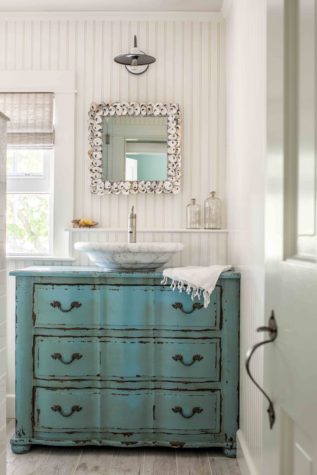 The upstairs guest bathroom features a blue dresser that Manganello converted into a vanity. 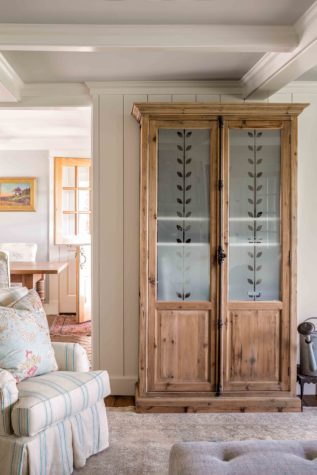 Manganello found this pine cabinet and finished it with a medium varnish and stickers to create an antique-inspired, etched-glass look. 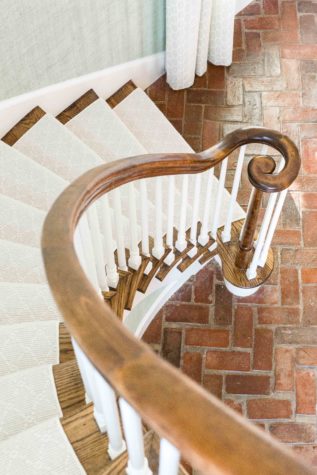 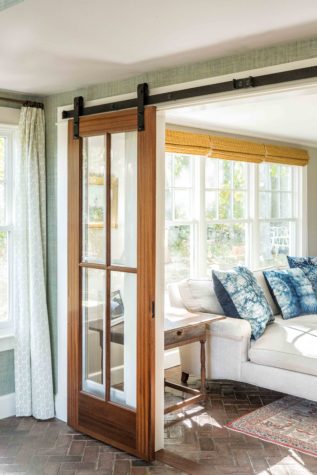 A sliding barn door leads into the den, where Nan and Sam watch television. The indigo pillows help add a masculine touch to Sam’s space. “Before the renovation, that was our dining room, and we never really used it because it was too formal,” says Nan. “We flipped the floor plan so the dining room would be closer to the kitchen.” 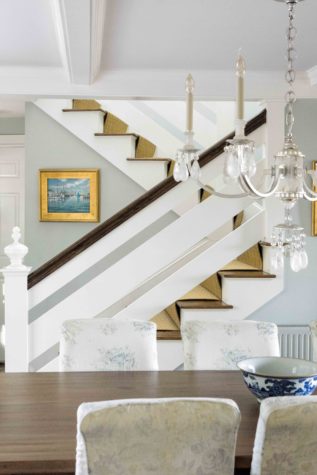 Manganello helped the couple figure out how to best meld their styles. Although a lot of new features were added, Nan has had these linen slipcovers in her dining room for over 18 years. “They’re just so easy,” she enthuses. They also happen to go with the blue and green color palette.

Nan and Sam Scott love to light fires. Every evening, after Sam gets home from the hospital (he’s a surgeon, and Nan is a retired nurse), they settle down in front of the fireplace. Snowy winter Saturdays are often spent watching the flames dance, and even on cool summer evenings, they’ll gather some tinder and build a modest fire. Nan will make tea, and Sam will pull out his guitar and begin to strum. This is their routine: good books, hot liquids, and the sound of wood popping and crackling in the background.

So, when it came time to renovate their Cumberland home, the Scotts started at the most logical point: the fireplace. When they bought the farmhouse-style shelter in 2000 it had a large center chimney with one hearth in the kitchen, one in the living room, and one in the owners’ suite. After years of living happily in this fireplace-rich space, they decided they wanted to change the flow of their living areas and update the decor. Both Nicola Manganello, owner of Nicola’s Home in Yarmouth, and Tanner Maguire, owner of Maguire Construction in Yarmouth, were brought in to give the house its makeover. “When we met to go over drawings, they made it clear that a new fireplace was their focal point,” says Manganello. “That was priority number one.” Nan and Sam wanted to restructure the interior of their home to create an open floor plan (rather than a series of small, closed off rooms) with a single large, central fireplace on the first floor that they would be able to see from the kitchen and the entryway. “Nan wanted the fireplace to look like it had been there for years,” Manganello says. “So we renovated the house around it.”

“What we started with was a very traditional colonial house with a center chimney, and the clients wanted to convert it to an open concept,” explains Maguire. “So many of the house’s views had been hindered by that big center chimney.” Manganello drew an updated floor plan that removed one of the fireplaces, knocked down the dining walls, and introduced a new chimney in the living area. She also designed a reading nook, which necessitated moving the exterior walls slightly to create a micro-addition. While it may have looked out of place on another home, the bump-out it fit right in with the New England farmhouse aesthetic. “On old colonials and Capes, you’ll see a variety of features that have been added on over the years,” Maguire says. “It felt right.”

Aside from the bump-out, the house’s exterior remained largely the same, while the interior underwent a dramatic transformation. Yet the flow of the space feels organic: Manganello and Maguire seamlessly integrated old features (like the herringbone-pattern brick floors in the foyer) and new (like the wide oak planks in the living room). The fireplace, which is made from New England granite, features a heavy stone mantel and wide-spaced mortar. “Those giant stones give it the attention it deserves,” says Maguire. “It gives weight and presence to the room.” Manganello even took the couple to a quarry to help them pick out individual stones. She explains they decided on granite “because you get this nice, mossy patina.

While they didn’t come to us with a lot of criteria, it was important to them that it feel like something we uncovered or unearthed.” Inside the fireplace, Maguire’s team installed herringbone brick, which creates a sense of continuity with the original flooring. “They paid attention to every element of the space,” says Manganello of the Scotts. “He’s a surgeon and he’s very detail oriented, and she knows what she likes to look at. We were working with homeowners who really care, and that shows in the final product.”

While both the Scotts wanted the space to feel warm and cozy, there was some slight divergence in their personal styles. Nan is a self-described “shabby-chic romantic,” and Sam prefers a more masculine, nautical look. Natural materials like wood, stone, and copper provided a good compromise for the longtime couple. Shiplap walls pair with wood and stone ceilings to create a living area that feels classic yet welcoming. Nan and Sam also gave each other free rein in certain spaces. The powder room is very Nan, with a pine cabinet (finished to look like mahogany), floral grasscloth walls, and clusters of decorative mirrors, while the den is designed to speak to Sam’s hobbies (“He’s a sailor first and a surgeon second,” jokes Nan), featuring large mahogany doors on a barn track, woven shades to add texture, and indigo throw pillows.

“One of the things I loved about working with Nicola is that, while she does beautiful work and has her own look, she understood that I have my own color palette,” says Nan. “I’m drawn to blues and beiges—the colors of driftwood and the ocean—and I like a little pop of pink.” With this in mind, Manganello set about choosing textiles that would lend a light and calming feel to the space without skewing overly girlish. At ABC Rugs in New York City, she found an antique rug that has an appealing color pairing of turquoise and cream. Since it was a “big-ticket item,” in Manganello’s words, they decided to “commit to the rug and build the living room from there.” The result is a space dominated by pastels and neutrals, with a few jewel tones thrown in as grounding elements, like burgundy pillows and wine red throws. Since Nan is drawn to antiques, Manganello helped recreate some old-fashioned looks using modern products, like the pine cabinet that sits near the sofa. The glass on the cabinet looks as though it’s etched, but the frosted look and vine detail comes courtesy of a very large pair of stickers. “We got them from a company in London, and when we put them on, we spent some time running our credit cards over the decal to get all the air bubbles out,” Manganello remembers. “That was a new process for us.”

While the elegant cabinet is a clever bit of design deception, the stairway needed no such alterations. The main staircase is a swirling, graceful structure that was original to the house. “That stairwell is probably what sold me on the house,” Nan says. “When we first saw it, everything was wallpapered, and it wasn’t my style. But the bones of the house were so nice, and I saw this round, mahogany, ballroom stairwell and I loved it.” Maguire stripped the stairs down to the bare wood and refinished them, giving the railing a new, soft sheen. “The house was outdated, but it was well preserved,” he says. Although he recognizes that new construction is a “cleaner, easier process,” he enjoyed working on the Scotts’ house. “Renovations like this give you the opportunity to be creative with the space, and in the end, you have this cool, quirky space you wouldn’t have thought to design into a new build.”

The project wrapped up in 2015, and Nan and Sam have since settled into their old-but-new living space. It’s been a few years since they underwent the restoration process, but the thrill of living in a thoughtfully designed house built around their habits and hobbies hasn’t worn off. “When we first moved back in after the renovation was done, we would sit on the window seat and look at each other,” Nan recalls. “I’d say to Sam, ‘I wonder who lives in this wonderful house, and will they be coming back soon?’” For Nan, the house remains a source of continual gratitude. “It’s the most peaceful place,” she says. “I love to sit here, reading, watching the fire, and watching the snow come down.” 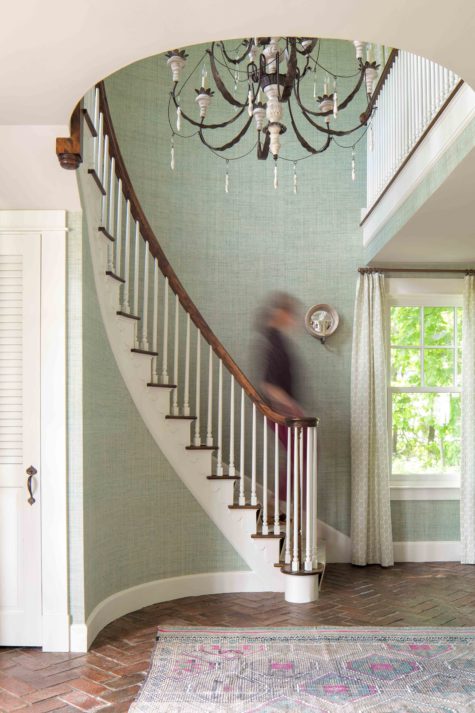 Manganello added robin’s egg blue grass cloth to the stairwell. “Blue is my favorite color,” Nan explains. “It shimmers, and it looks a bit like the ocean.” They kept the herringbone brick floors from the original structure. 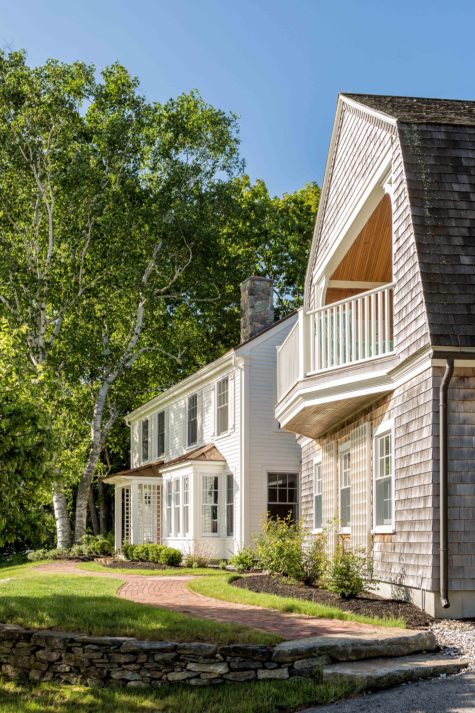 “Our home is warm, but it’s simple,” says Nan. “We want it to feel welcoming, and loved. Nicola did an amazing job helping us achieve that. She has so much talent and vision.” 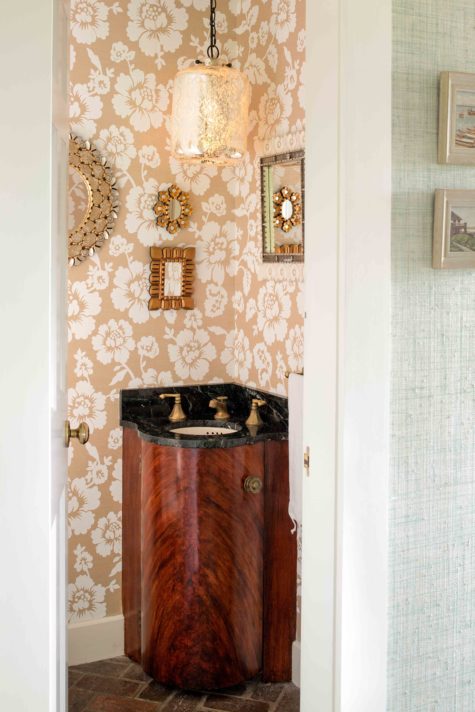 The downstairs powder room features a cluster of antique mirrors and a mahogany vanity.