From the Ground, Up

Inspired by Frank Lloyd Wright and the bedrock of Maine, a contemporary house springs up in the midcoast 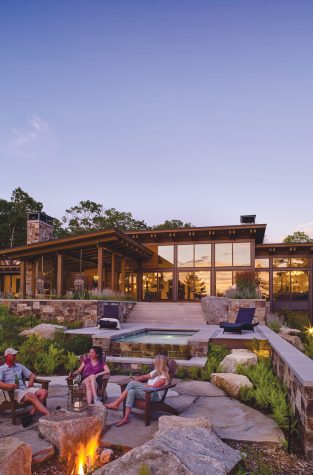 Granite, timber, and steel are the core materials used in this riverfront summer home, located in the hills of midcoast Maine. 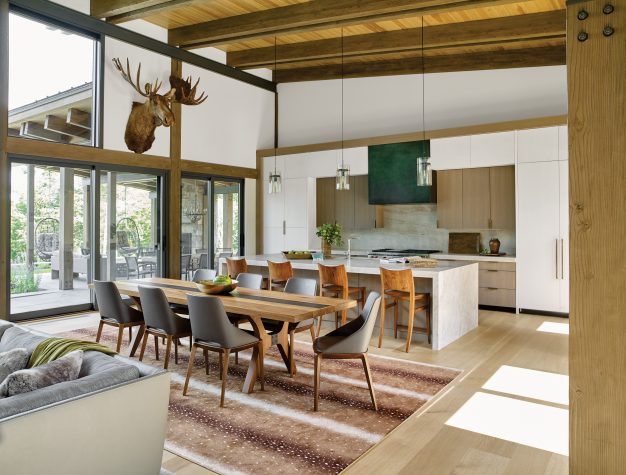 While architect Rob Bramhall created the overarching design and helped select the color palette, the homeowners were responsible for the bulk of the interior design decisions. The two realms compliment each other nicely, and the dining room table (featuring a steel band the same color as the exterior supports) is a perfect example of this visual harmony. The pendant lights are from Fogg Lighting in Portland. 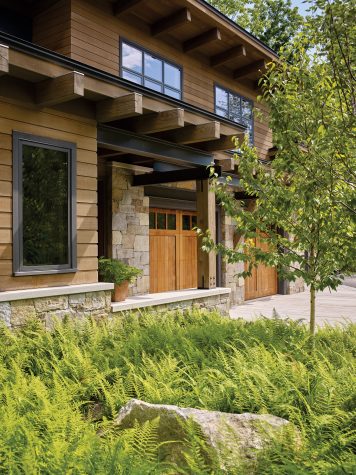 Landscape designer Soren deNiord was brought in early on. “We wanted to blend in with the natural stone of the site, so we chose a granite that is a natural gray with some warmer hues and some pinks in it,” he says. 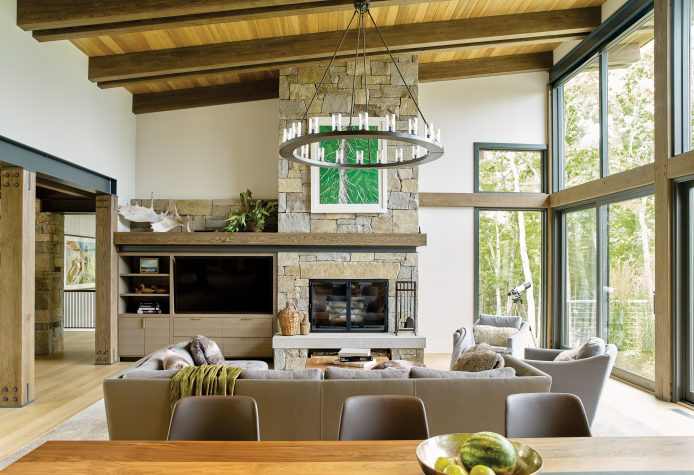 The stone wall begins at the front of the home and continues throughout. Constructed by Keystone Masonry using granite from JC Stone, it features tightly set rectangular pieces with no visible mortar. The windows are from Kolbe and Kolbe. 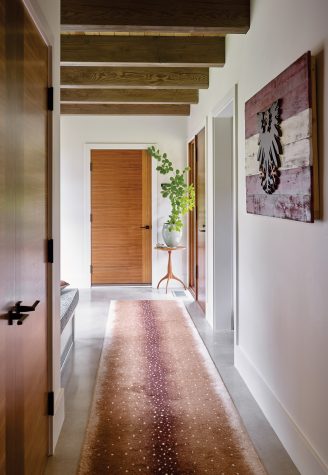 While some sections of the house use single timbers, others feature double exposed beams. This creates a visual hierarchy, explains Bramhall. While he used Douglas fir for the timbers and siding, Bramhall had the wood burned and stained, which neutralized the wood’s natural red tones 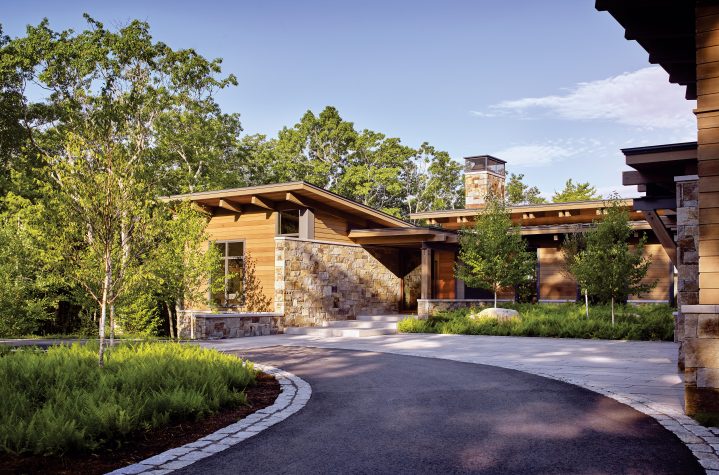 “There was the perfect melding of skillsets from all involved,” says builder Chip Thorner. “It’s a legacy house. It’s built in the 2020s but it’s going to be around for a long time.”

Among Maine’s many natural charms, from the paper birches of the highland mountains to the secluded beaches of the northern coast, granite is perhaps the easiest to overlook. It’s everywhere. This hard, speckled stone is the foundation of the state, both physically and metaphorically, and one of the region’s greatest cultural exports. It’s less delicious than lobster, less photogenic than L.L.Bean, but nevertheless Maine granite is everywhere. It was used to build the Washington Monument, the steps of the Congressional Library, the Brooklyn Bridge, and more.

To put it mildly, granite is an obvious choice for local builders and architects. But this doesn’t make it a poor choice. It’s practical and reliable, and in the right hands it can be downright beautiful. Especially when you let it take center stage.

That’s what landscape designer Soren deNiord did on a forested property on the midcoast. Working with a team of craftspeople, including Rob Bramhall Architects, Thorner Building Corporation, and Keystone Masonry, deNiord created a hardscape on a hill that puts granite front and center. “The stone unifies the house and the landscape,” says deNiord. “We spent a lot of time with JC Stone selecting the right color and texture for the paving and for those huge pieces by the front door. We were trying to mediate the aesthetic, which is somewhat contemporary but also rustic Maine.” They chose a gran- ite that had natural gray tones with underlying hints of warmth. “The pinks come out when it gets wet,” deNiord says. “It changes with the conditions.”

While choosing the site was relatively easy—the homeowners had family with homes nearby—it took a bit more time to figure out the look and feel of their new shelter. “We live in a colonial in Massachusetts,” says the husband “and we didn’t want the same thing.” Although not an architecture buff, he had long been an admirer of Frank Lloyd Wright, founder of the organic architecture movement. The homeowner liked the exposed timbers, wide windows, and steel supports that Wright employed in many of his most famous projects, and wanted to do something similar in Maine. However, it was also import- ant to the family that the building nestle into the ecosystem. “We were going to develop something modern in an environment that doesn’t have many modern buildings,” the husband continues. “We were respectful of that. In Maine, you see a lot of things from the boat, but from the river you can hardly see our house. We didn’t go and knock down all the trees. We didn’t need to.”

The intention was not to clearcut the land, but to place a contemporary structure firmly within it. The house is not retiring or quiet. It’s a strong statement, but one that feels appropriate for its setting. Perhaps the most striking feature of the house is the contiguous stone wall, which greets the guests at the main entrance, snakes through the house, and leads visitors out to the backyard, where it cascades down the hill. It’s not quite an unbroken line of stone—it opens for doors and fireplaces, shrinks and grows as it winds around the property—but it creates a visual continuity, linking the inside to the outside, the foundation to the fireplace, the backyard infinity hot tub to the inviting entryway. “It’s an important linear element,” explains Bramhall. Even in a house filled with clean, clear lines, the wall stands out. It features large stones tightly set. Rather than using rounded stones, which would give a more cottage-y look, the team opted for square and rectilinear pieces. “It was important to me that you not see any mortar,” Bramhall says. And Jordan Keller of Keystone Masonry delivered.

“Jordan had the biggest hands I’d ever shaken in my life, which is maybe what you’d expect from a stonemason,” remembers the husband. “But he also had the biggest smile. He’d come in, set up camp, and just work and work. It was clear he enjoys his craft. He is an artisan.”

Chip Thorner also stresses the importance of craftsmanship. “There was nothing rote about this build,” he says. “For my guys, that was unusual. We had done bits and pieces that were similar before, but noth- ing quite like this.” He had worked on houses with steel framing, large glass windows, big timber post-and-beam rooms, but never had he seen them combined in quite this way. It was exciting. “In other houses,” he says, “you endure the stairs. You pass through them. But you don’t enjoy it. With this house, there are tiny details that you may not notice on first glance—like the nickel-gap on the wall lines up exactly with the nosing of each stair tread— but once someone points it out, you realize.

Yeah, that’s what it is.” It makes the experience of moving through the space feel harmonious and calming. The light from the contemporary pendants (sourced at Fogg Lighting in Portland) merge with the natural light that pours in through the large, west-facing windows, illuminating living spaces that are unfussy yet graceful, filled with big couches, simple Thomas Moser chairs, and neutral textiles. Thorner compares it to visiting an art museum, seeing a painting, and falling into its oiled surface. “I might not know why it’s good,” he says, “but if I’m with someone who knows art, they can pinpoint why I like what I see.” Speaking of art, the homeowners happen to be collectors of paintings by Alex Katz, Julian Opie, and Paul Norwood, among others. “The art is really special to us,” says the husband. “It’s work that has Maine in its DNA. It’s cool. It’s just cool art.”

Also key to the house’s aesthetic is a sense of cohesiveness. The three main elements—timber, stone, and steel—return time and again throughout the space. While much of the house’s warmth comes from the wood and much of its color comes from the stone, there’s a hint of the industrial imparted by the gray-black steel supports. While steel plays a larger role in the exterior design, the homeowners brought in accents of metal throughout the home, from a strip of steel that runs down the wooden dining room table to the steel above the barnwood door to the steel railings on the stairs. “We designed the vertical elements of the steel railing after my moth- er-in-law pointed out that the kids could hop over the original horizontal design,” says the husband. They wanted something rugged and durable to stand up to the machinations of his “brood” of youngsters. “They love it,” he says. “They can run their hands over it and listen to the sound, like it’s a musical instrument.”

Speaking with the husband, it’s clear that the two key concepts to this project were strength and family. He wanted to showcase the strength of the materials (hence the big exposed Douglas fir timbers, the wide-cut oak floors, and the raw metal) while creating a space where kids could be kids and family could come together (which explains the versatile bunk rooms, the ball field outside, and the backyard “spa,” complete with a fireplace, hot tub, and heaters). Everyone on the build knew this, and it made the process both more complicated and more enjoyable. “It’s a neat feeling,” says Thorner, “to know his kids will sleep in these bunk beds, and no doubt, their kids as well. We all understood we were building a house for future generations. This proj- ect demanded that the team work at its highest level, and these guys, the carpenters, the masons—they have mad skills. A lot of times, their full range of skills isn’t really called upon, but here it was.” Thorner knew they were building a home that would stand the test of time, weather, and most significant, the wear and tear of everyday life.

Because that’s what the midcoast retreat has become—an everyday place for a big, young family. Since the pandemic began, the homeowners have found their family spending more and more time at the house, where they can spread out and hang out. The quarter-acre of blueberries on the property brings a great deal of joy to the wife. She grew up in Maine and enjoys pick- ing them with the children and using the harvest in their meals and baked goods. “When we’re in Maine, I don’t feel as stressed,” the husband says. “It’s been a tough year. Having this house has changed things, made it more engaging and natural. We’ve been able to spend quarantine with our family. We’re closer now because of it.” 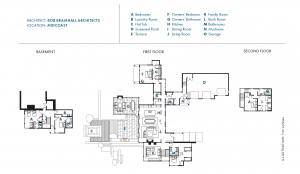 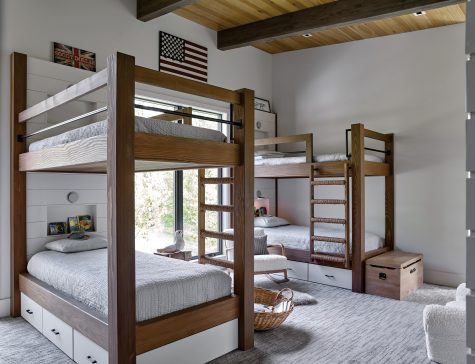 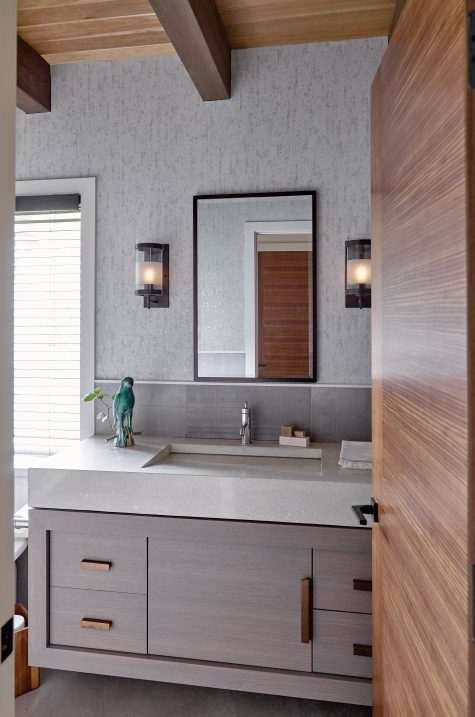 Like the rest of the home, the bathrooms are gray, modern, and sleek, featuring fittings from Koehler and cabinetry by Thompson Custom Woodworking. 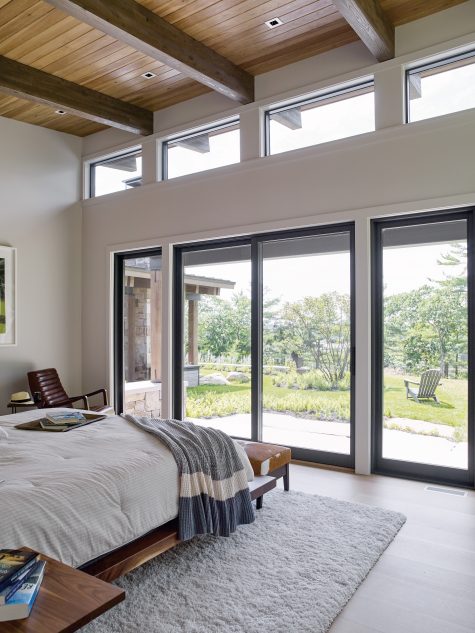 “There’s a little bit of what I’ll call classic industrial feel to the house,” says the husband. “Some of that comes from the brick-and-beam structures of Boston.” He was also inspired by the work of architect Frank Lloyd Wright. “My wife got me a book of his work one year because she knew I liked him.” 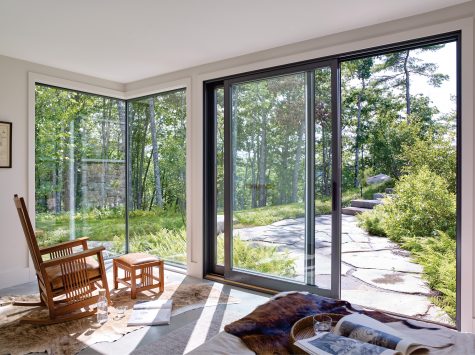 The solid wood furniture, like this craftsmen-inspired rocker and footrest set, brings a bit of warmth to the white and gray rooms, as do the animal hides and touches of taxidermy. 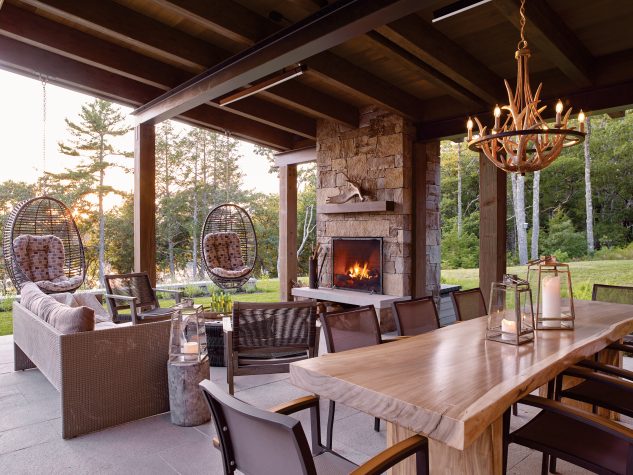 While the porch was originally designed to be screened, the homeowner found that it was unnecessary. “The wind keeps the bugs away,” he says. “Plus, we wanted the kids to be able to run through.” 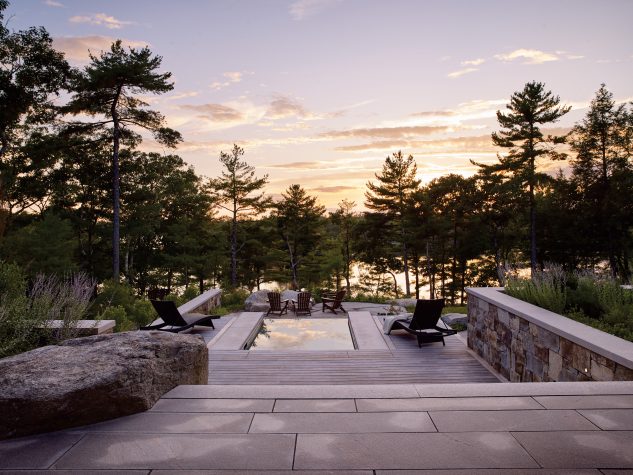 Much of the socializing happens out here, on the terrace, surrounded by lavender and fern. “The hot tub is just there to enjoy life and watch a good sunset,” adds the homeowner. 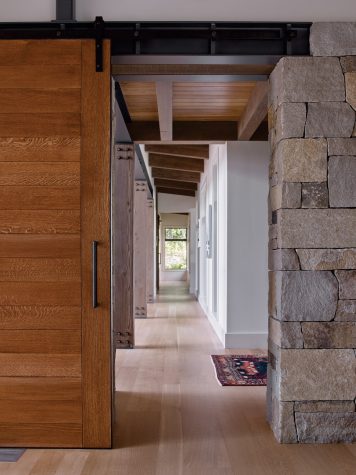 Views from every angle. “Every hallway ends with a window,” says Bramhall. “There are no dead-ends.” 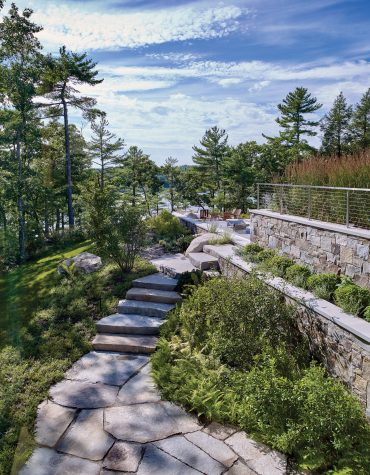 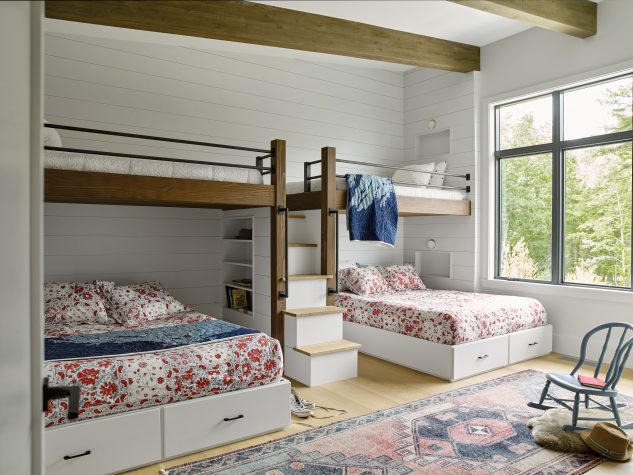 “We have four children under the age of ten. So a lot of the elements were designed with that in mind. The bunks have to be indestructible,” explains the homeowner.