Inspired by the historic architecture of New England, this contemporary home on Prouts Neck proves that the devil's in the details. 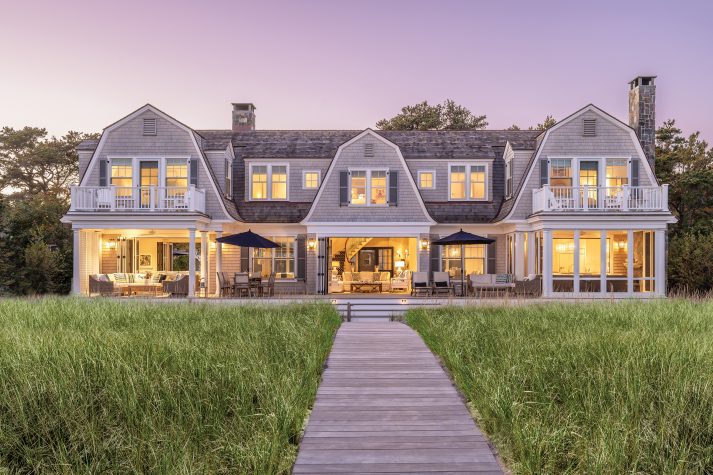 Trevor Watson of Eider Investments designed this gray shingled home (with over two miles of trim) on Prouts Neck around the ocean views. 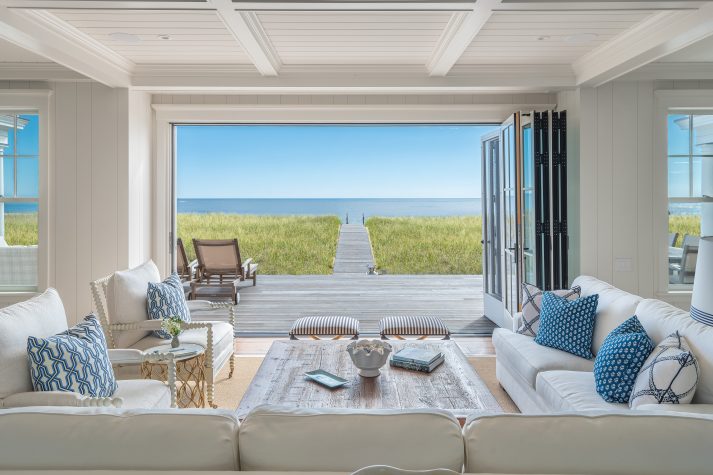 A view of the living room designed by Hurlbutt. Eider installed a series of NanaWall doors facing the ocean. 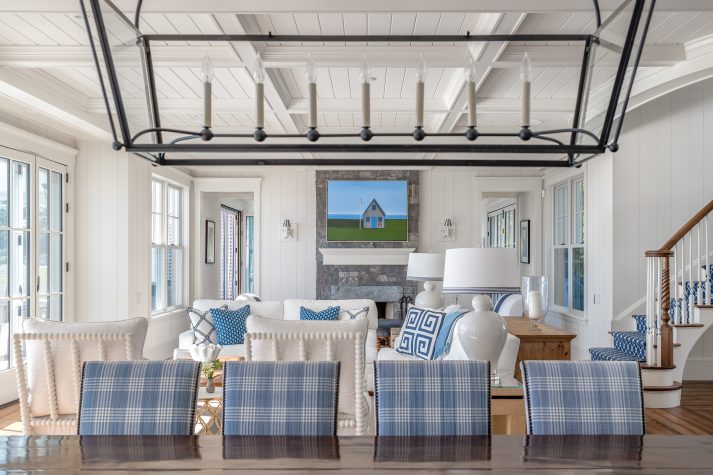 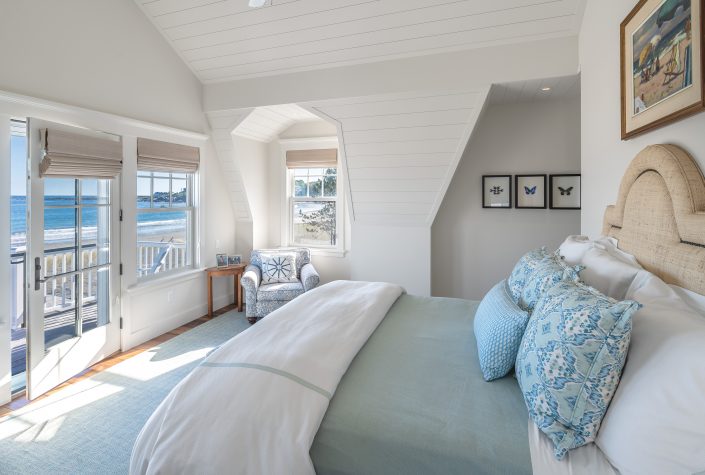 The owners’ suite features a custom-designed headboard and, above it, a painting that holds tremendous sentimental value for the couple. “We purchased it in Montreal the week after Andrew’s grandmother passed away,” says Sheila. “It reminded us of summers at the Atlantic House and of the beach.” Andrew is originally from Montreal and started going to Scarborough Beach in Maine when he was one year old. “My family went there for decades and for generations, actually,” he says. He calls this Prouts Neck home a family retreat. 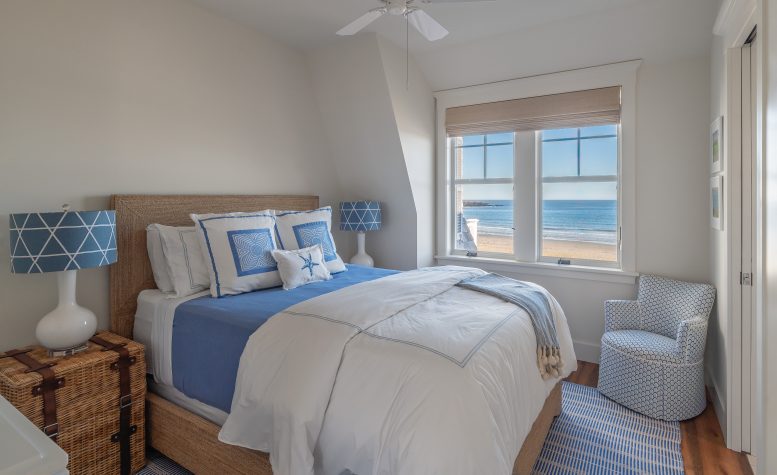 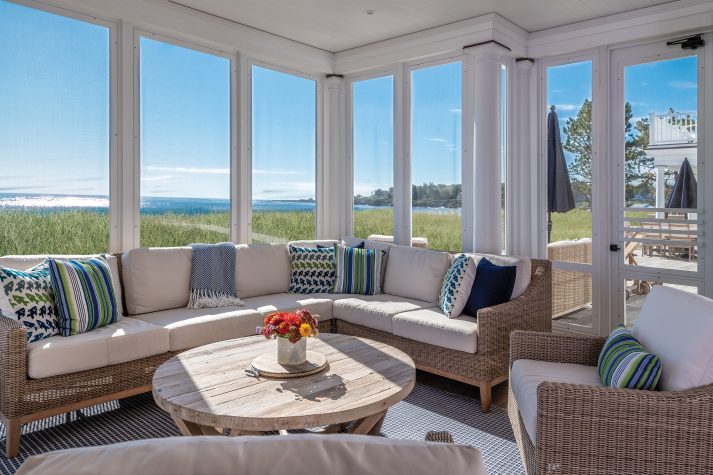 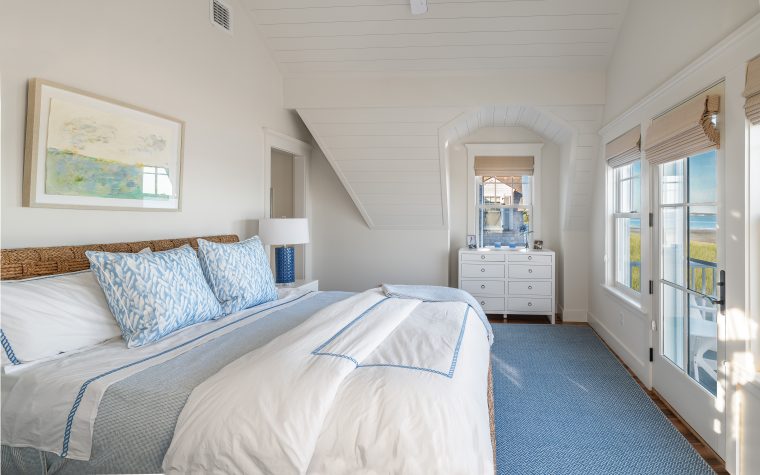 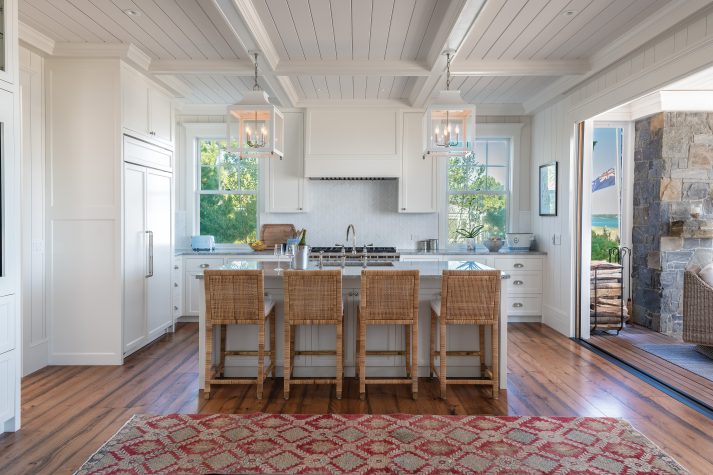 White lanterns from Hudson Valley Lighting hang over the kitchen island. “We brought a little whimsy into the design through light fixtures,” says Hurlbutt. 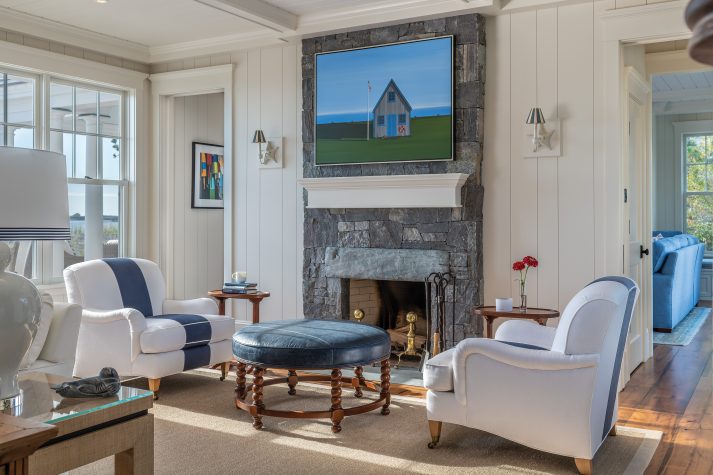 Andrew Black had the idea of creating a “progression on the rustication of the fireplace stonework,” explains Watson. As you move through the house, the fireplaces get increasingly relaxed in appearance. “The most formal is in the living room, featuring the tightest stonework, the most consistent color, and the most formal mantel. 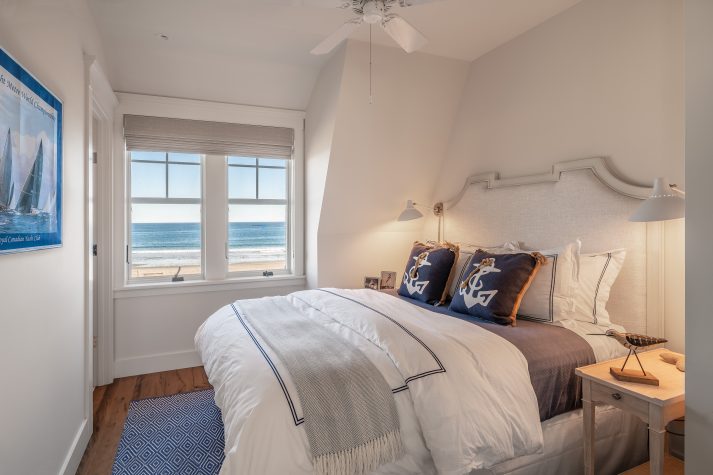 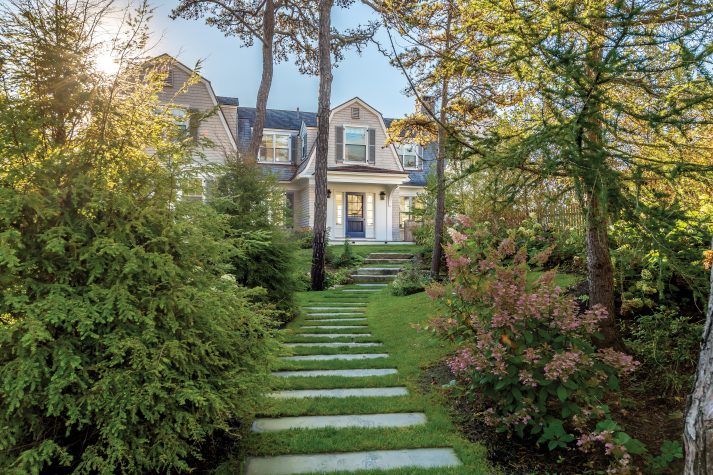 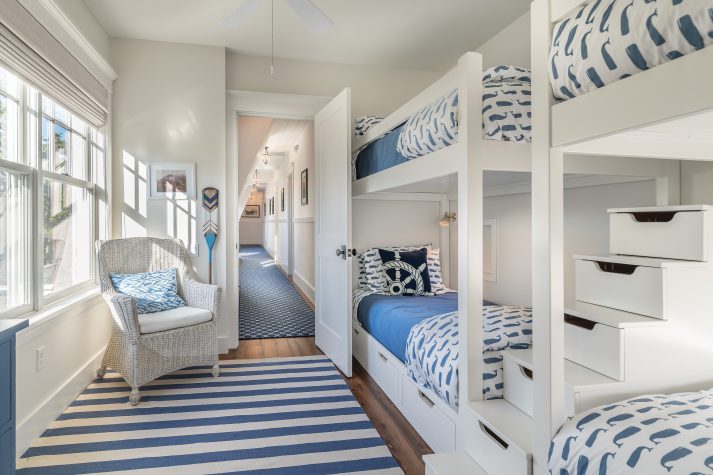 “Every bedroom has ocean views plus an en-suite bath,” says Hurlbutt. “That’s a big deal in a summerhouse.” She particularly likes how the bunk room came out. “I love the coloring, the fun whale sheets, and that striped carpet,” she says. “It’s a very formal house, but there are some playful elements.” 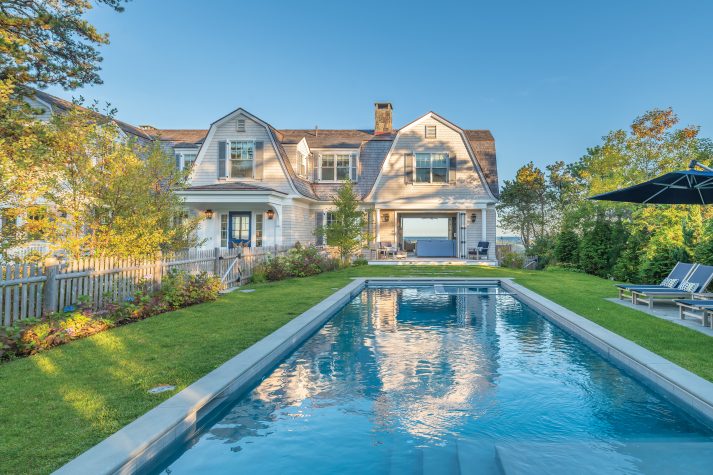 The design of the home was inspired by classic New England architecture—tweaked for modern family life. 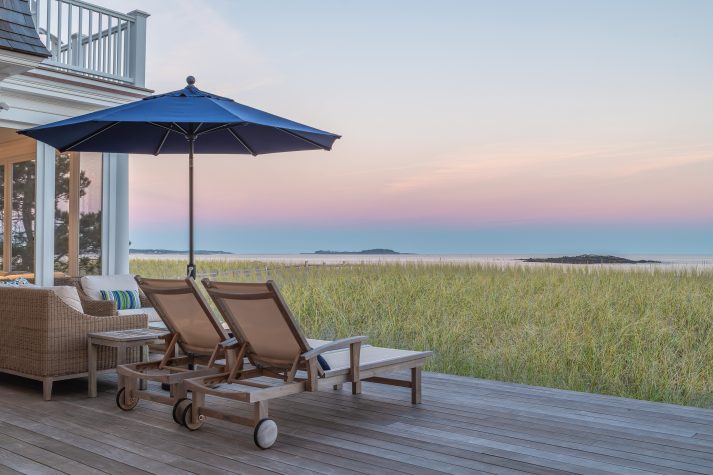 Scarborough Beach has played a large role in the Black family’s history. Their relationship with the sandy stretch of land dates back decades; Andrew Black’s grandparents stayed at the historic Atlantic House hotel for their honey-moon in 1930. Andrew spent 23 summers at the beach and returned with his wife, Sheila, the last night of their honeymoon. After a number of years renting in the area, the Toronto-based couple returned to Scarborough Beach and the coastal community of Prouts Neck and bought a house on one of the “lanes.” Then, in 2019, a beachfront property came up for sale, and after considering sea-level impacts, minimum foundation elevations, and winterization, the Blacks decided to build a new house for their family. Their goal was to craft a generational property where grandparents, parents, and kids could be together.

“We wanted to add to the shoreline and have our house fit in—not just with Prouts Neck’s history, but the history of Maine architecture,” Sheila says. “When we got married and brought up a family, we always dreamed of our kids and grandkids being able to enjoy the beautiful Maine coastline that we loved so much,” adds Andrew. The couple have four daughters who are based in different cities across the eastern seaboard. “Maine is our primary meeting spot for our family and extended family,” explains Sheila. “We built this home with that in mind.”

They chose to work with Eider Investments, a Scarborough-based design build firm that specializes in shorefront properties. “All our work is word-of-mouth,” says architectural designer Trevor Watson, who has been adhering to Prouts Neck’s limited building schedule (construction is allowed only during the off-season) for over 20 years. The design Watson did for the Blacks was inspired by classic New England architecture. “It’s understated, with high-quality design—not flamboyant or flashy,” says Watson. The exterior of the home is covered with cedar shingles, which will weather to a soft silver hue, and is defined by a series of gables. The chimneys have stone veneer to give them an appropriately classic look. The house has many interesting architectural features. “I’m particularly proud of how the elliptical staircase turned out,” said Watson. “It was a very tricky design challenge.”

Being so close to the ocean, there were design factors that the Blacks needed to consider, but they were excited to work with Watson on this challenging project. “I’m probably partial, but I think these are some of the nicest pieces of coastal property on the eastern seaboard,” Watson says. What was unique about this project was that it was built during COVID. “We spent many hours on the phone with the Blacks, given the travel restrictions that prevented them from seeing the ongoing progress of the build,” adds Watson. “Trevor and I shared a clear vision for the project, and Sheila and I really enjoyed working with him and the entire team at Eider. They take great pride in their work and always conduct themselves with the highest integrity,” says Andrew.

“From the beginning, the Blacks had a very clear direction they wanted to go,” Watson reflects. “I think their level of involvement is the reason why the project turned out as successfully as it did.” In addition to frequent check-ins with the homeowners, Watson was also able to confer and collaborate frequently with interior designer Louise Hurlbutt, who weighed in on some of the finer points of the construction. She suggested adding nickel-gap paneling to walls and worked with Watson to design the coffered ceiling of the great room, and she was instrumental in creating the dramatic curved staircase with its custom blue and white patterned carpet. “These things help give it the appearance of an old home,” says Hurlbutt, who had worked with the Blacks on their previous Maine home and knew their taste quite well. She also knew white walls would look lovely next to the imported antique wood floors, and she recognized how effectively the gambrel roofline would work in their favor when it came to the second-story bedrooms. “It would have made no sense to have a flat ceiling in the bedrooms,” she says. “The architectural details, the mouldings, the ceiling line, the nickel gap—these things really add so much to a room.” She notes that, although there’s not a lot of space to hang art in this house, you don’t need it. The house speaks for itself.

“When we got married and brought up a family, we always dreamed of our kids and grandkids being able to enjoy the beautiful Maine coastline that we loved so much.”

Plus, there are the views. “People are like moths,” says Watson, “but instead of going toward lamps, they flock to the ocean views.” To take full advantage of the lot’s best feature, they oriented the house toward the water, shrunk the size of the bathrooms, eschewed hallways, and squeezed the front entryway underneath the stairwell. “We managed to bury the front door under the staircase, which gives a real ‘wow’ moment when people walk through it the first time, look over their shoulders, and see this incredible view,” Watson explains. “The front door, when it opens, has about a quarter inch of clearance. It’s incredibly tight.” While the small bathrooms may have “pushed the limits” (in Watson’s words) in terms of size, they did manage to squeeze in en-suite bathrooms for all the bedrooms upstairs. “Louise Hurlbutt’s spatial conceptualization and sense of proportion are brilliant,” says Sheila. “She mapped out the spaces to within an inch in every room, maximizing flow and multifunctional space.”

While Hurlbutt installed budget-conscious Dash and Albert rugs upstairs in the bedrooms, she went with a higher quality for the downstairs living room. This contemporary space is open-concept, flowing seamlessly from kitchen to dining area to living room to porch, separated only by hidden pocket doors. To add warmth and color to the living room, Hurlbutt brought in a leather ottoman, raffia side tables, and, underfoot, authentic Belgian-woven sisal. “The royal cobalt and cornflower color palettes are a reflection of the New England coast,” says Hurlbutt.

The blue rugs, throw pillows, armchairs, and artwork all pay tribute to the shifting waters of the Atlantic, which can be spotted from almost anywhere in the house. In addition to the large windows (oriented with six muntins on top and one on the bottom to allow uninterrupted views and for nifty historical nod), Eider installed a series of NanaWall doors facing the ocean. These movable glass walls and folding doors allow the Blacks to open their home to the breeze. “I had never heard of NanaWall before,” says Andrew. “But I was very interested in them, and in figuring out how they could work for a New England home, with the nor’easters.” Andrew talked it over with the team at Eider, and they decided to move ahead with the NanaWall doors, despite the fact that they didn’t come with screens. “We had worked with NanaWall before, but this time we decided to buy the parts and make our own accordion screen doors to match them,” says Watson. Now, the family is able to experience their first-floor great room as though it’s all one big indoor–outdoor space.

Since completing the build in 2020, the family has been able to gather regularly in their new beach house. The Blacks are very grateful to the entire team that came together to build the house in nine short months. The success of the project is easy for them to see. Andrew puts his praise quite simply: “When our family comes to Prouts, we never want to leave. The house is filled with happiness.” 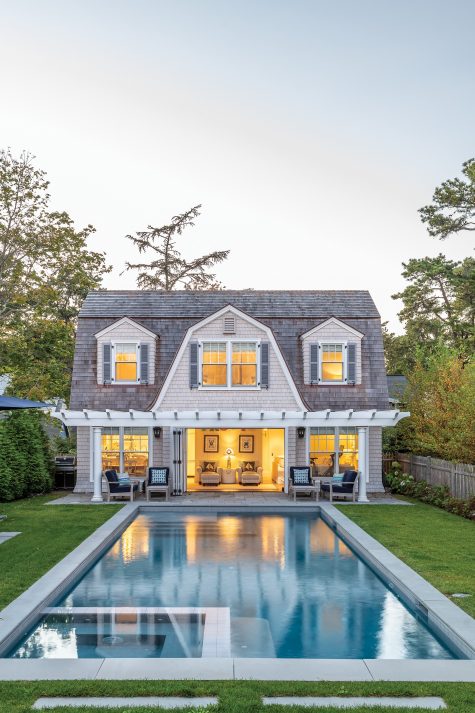 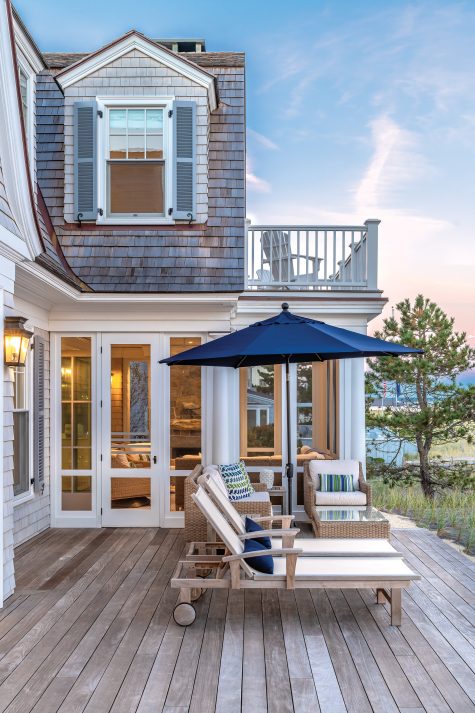 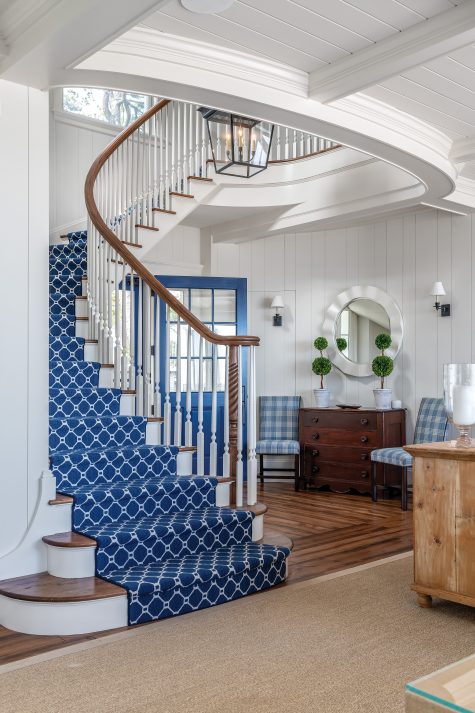 Interior designer Louise Hurlbutt had worked with the Blacks before, so she knew their style. “The stairs are something we marvel over, and how Trevor was able to build them so beautifully,” says homeowner Sheila Black. “He had to convince us, but he did an extraordinary job.” 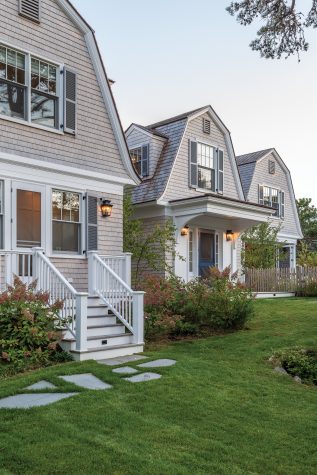 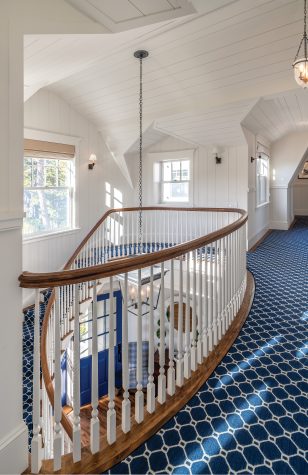 Much of the visual interest upstairs comes from the architectural details, like the nickel-gap paneling and the crown molding. 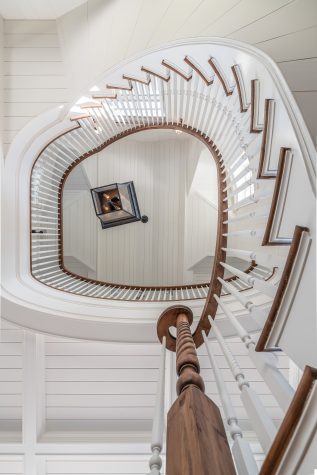 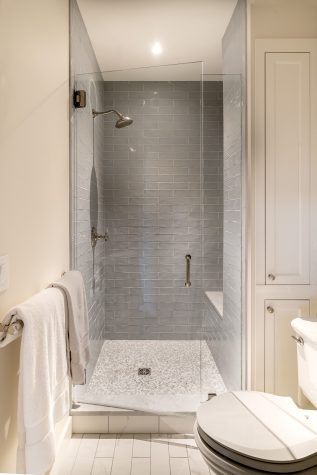 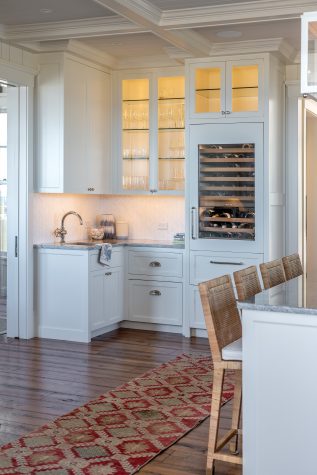 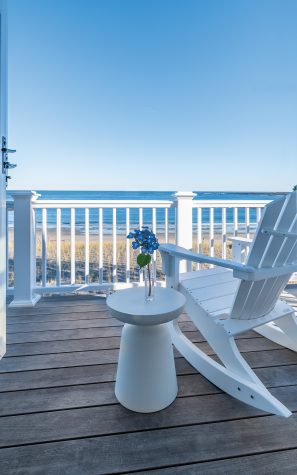 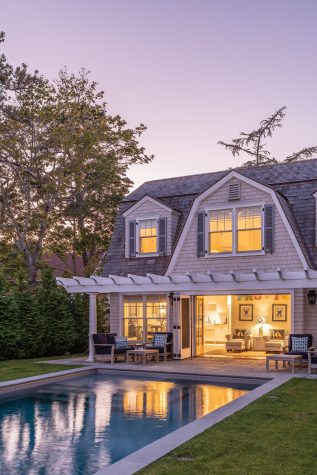