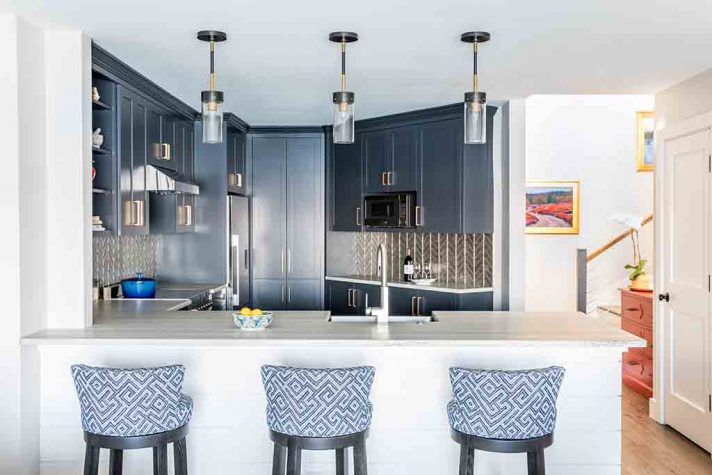 A small, awkward kitchen was transformed into a showpiece by the team of designers at Centerline Design and Build, working with builders from Maine Properties. The space is defined by the deep bluish gray color of the cabinets, and separated from the living/dining space with a peninsula topped in vein-cut white Macaubas quartzite. 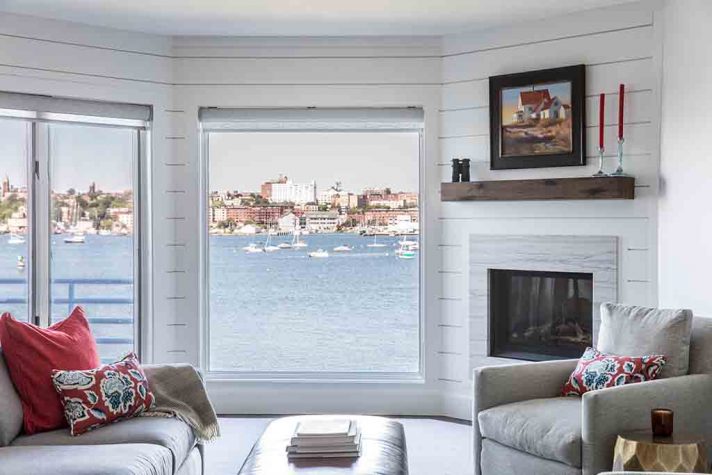 Covering the interior of the outside walls with shiplap created a frame for views of the South Portland waterfront and Portland skyline. Centerline Design and Build sourced warm textiles, including a couch and chairs from Lee Industries and Schumacher pillows, to keep the space cozy. 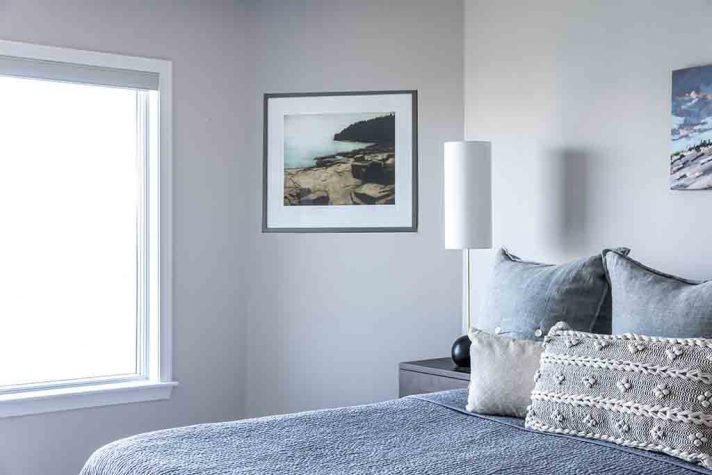 The owners’ bedroom, with bedding by Coyuchi, provides a serene backdrop for the owners’ collection of local art. 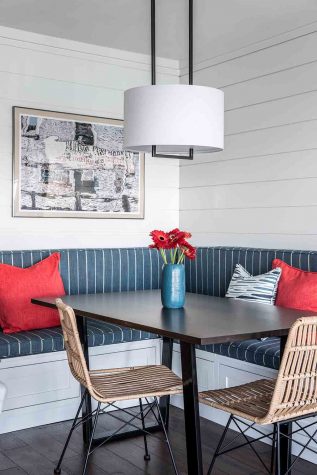 The condo’s nautical color scheme was inspired by the photograph above the dining table, by Elzbieta Weron. The banquette was designed by Centerline Design and Build and built by Denbow Finishing, with upholstery work by Atlantic Furniture and Reupholstery. It provides storage as well as seating— important in a space where the team was “fighting for inches.” 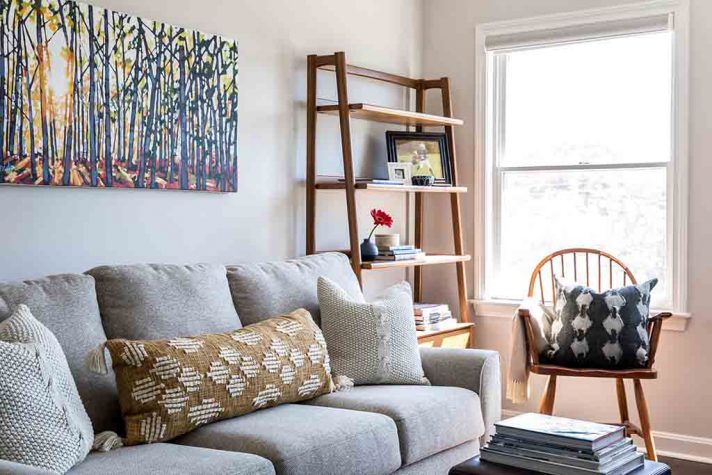 In the upstairs guest room/office, a painting by Holly Lombardo hangs above a pullout couch from American Leather. 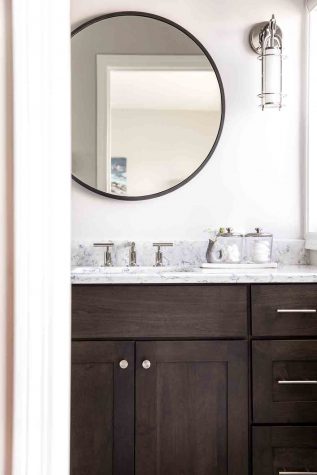 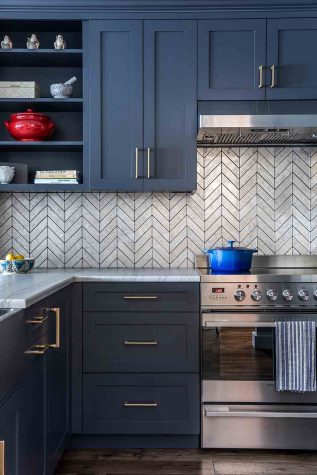 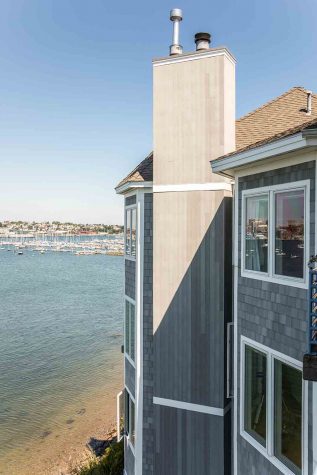 The view from the condo’s small balcony (opposite) includes the beach below and Munjoy Hill across the harbor.

In 2015, Hannah and Arne Klepinger’s children had left for college, and were starting to think about downsizing from their 3,000-square-foot home in Yarmouth. “I thought it would take a few years. It took a few hours,” says Hannah. The couple looked at eight condos, and the seventh, a compact two-story space on the South Portland waterfront, caught Arne’s eye. Hannah was uncertain—there was a “strong ’80s vibe,” the kitchen was small, and the layout was awkward. Having managed renovations before, she knew how much work it would take to make the condo suit their taste and lifestyle. But in a few weeks the deal was made. “It felt like when you catch a wave at the beach and you just go with it,” says Hannah. “It was a leap of faith.”

The story Hannah tells of the renovation is full of such leaps—and of gratitude to the professional team who gave her the confidence to make them. She called in her long-time friend Jeanne Rapone, principal designer of Centerline Design and Build, for an opinion. “Jeanne came here and said, ‘Oh, of course we can fix this place. Don’t worry.’” After several phases of renovation managed by the Centerline team (on which the Klepingers’ daughter, Laura, is an assistant designer), the space is open, clean, and cozy, with a showpiece kitchen and a fresh, “coastal industrial” aesthetic.

The condo’s most exciting feature is its view over the Fore River, encompassing South Portland’s working waterfront and Portland’s skyline along with swaths of sparkling water and sky. The original design made the south-facing windows hard to see before walking past the enclosed kitchen and downstairs bath into the living/dining area. Removing the walls on the living room and hallway sides of the kitchen changed the feeling of the space, bringing light and color throughout the main floor.

Exposing the kitchen also raised the stakes for its design, according to interior designer Lisa Morris. “There’s an elegance to it. If you’re going to have the kitchen be part of the living space, it has to be a little dressier,” she says. For the kitchen cabinets, project manager Kate Kyle selected Benjamin Moore’s Racoon Fur, a dark gray that reads as deep navy next to a striking backsplash of silvery herringbone-patterned glass tile. Where there was formerly a wall with a cutout over the sink, there is now a peninsula topped with a slab of white Macaubas quartzite from Morningstar Stone and Tile, providing a transition from the saturated color of the kitchen to the bright living and dining space. “Without walls, it’s the color of the cabinets that makes the kitchen a defined space,” says Hannah.

Freshening up the living space started with a coat of Benjamin Moore’s Picket Fence, a warm light gray. A heavy granite fireplace was replaced by a more modern one with a sleek marble surround, and Morris convinced the homeowners that wrapping some of the walls and the island with shiplap would give the space more warmth and texture. “I was nervous about the ship-lap,” says Hannah. “That was another leap of faith, but I really just trust these guys. It looks so good—like a frame of Portland.” She also took the team’s advice about the dining area, where she’d envisioned an elevated platform for the table: “I wanted it to be stadium seating for the TV. But everybody said no.” Keeping the room on one level lets the custom table accommodate chairs as well as banquette seating with hidden storage. “We were fighting for inches,” says Hannah. “Everything in this space has to kind of swim around depending on the situation,” Morris adds. “It’s a family home; it’s not a precious place that nobody’s using. Everything had to be super durable as well as multifunctional because of the size.”

The condo’s color palette originated in a large photograph by Elzbieta Weron that hangs over the dining table. It shows Portland’s Harbor Fish Market reflected in its namesake water, creating a painterly swirl of grays, reds, and blues. “We wanted a nautical color palette without going really kitschy coastal,” says Morris. “You don’t need to put out starfish and seahorses when it’s obvious we’re right on the water. We wanted it to be coastal industrial, where the two looks meet each other.” In addition to the shiplap on the walls, cable railings on the stairs, and contemporary lighting and fixtures, the look is created with carefully selected textiles. The banquette is upholstered in a sober shade of navy, with custom pillows in a fabric that suggests a restless sea under scudding clouds. Pops of nautical red keep the look cheerful, and the textures of leather and wicker add warmth.

Throughout the home, pieces of art collected on the homeowners’ travels through Maine and New England bring liveliness and coherence to the spaces where they hang. Above the fireplace, an autumn-hued painting of a Monhegan farmhouse by Susan Gilbert provides a focal point for the living area. On the other side of the room, a forest scene by Holly Lombardo creates a strong vertical element. In the entrance hall, a red chest from Redford House echoes the colors in a pair of pastels by Camden artist Kathleen Perelka that leads the way up the stairs, toward a painting by Traeger di Pietro bought on Martha’s Vineyard and an image of Katahdin by Deborah Grabber. The art brings whimsy as well, such as the wooden whale with teeth made of beach rocks that smiles over the downstairs bath.

The second floor holds an office/guest room with a pullout couch from American Leather, a guest bathroom, and the owners’ suite. The bathrooms were an early priority for renovation, and the owners’ bath in particular is now a calm and cozy retreat with radiant heat floors, a quartz vanity, and a glass-walled shower with subway tile walls and a penny-tile floor by Distinctive Tile and Design. In the owners’ bedroom, the large windows look out over the river. From this higher perspective there’s a clearer view of the beach below, where locals walk their dogs and watch the boats go by.

In the home she first approached with skepticism, Hannah Klepinger reflects on the past three years of decisions and changes, with gratitude for the professional acumen as well as the “hand-holding” offered by the Centerline team. The Kleplingers’ swift decision to downsize has led to a comfortable space in which to find new joys in a new phase of life. “At first I wasn’t sure I’d like it; it’s so different from where we were, so industrial,” she says. “But I love watching the big ships, the little tugboats, the Coast Guard. I love all the stuff I never thought I would.” 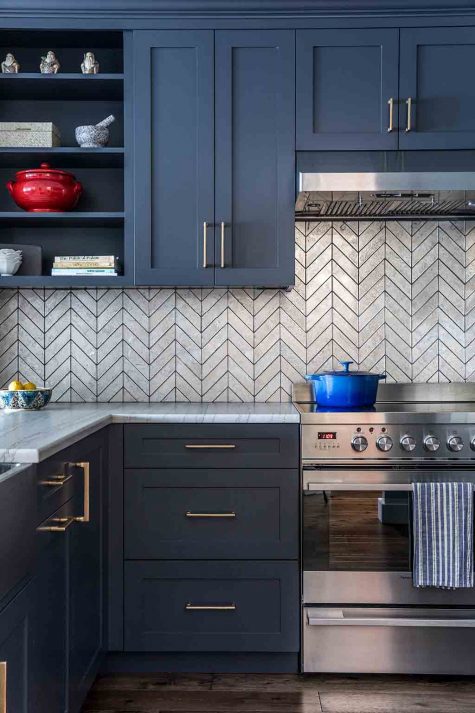 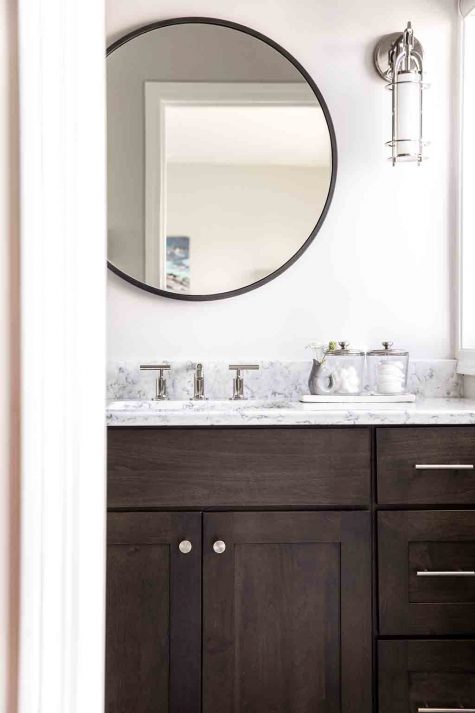