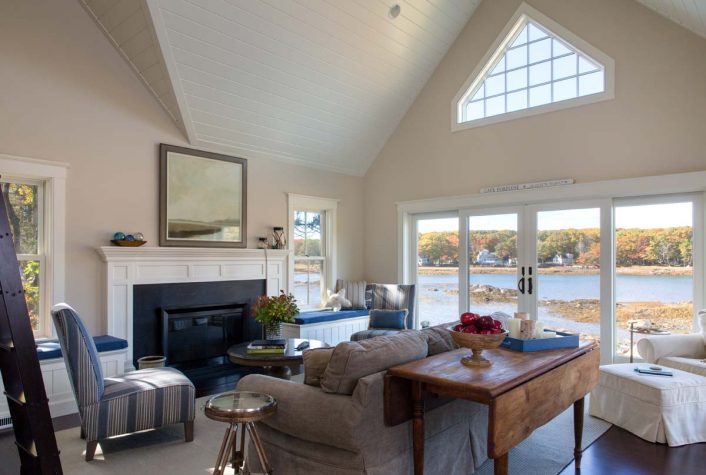 The cathedral-ceilinged living room has an informal, inviting feel. “The boys begged us not to buy new furniture that might require motherly rebukes,” says homeowner Jane Oakley of her two sons. Gifford paired a sofa and antique pine table the family already owned with Arhaus striped slipper chairs upholstered in durable Sunbrella fabric and a sturdy, bluestone-topped coffee table, also from Arhaus. 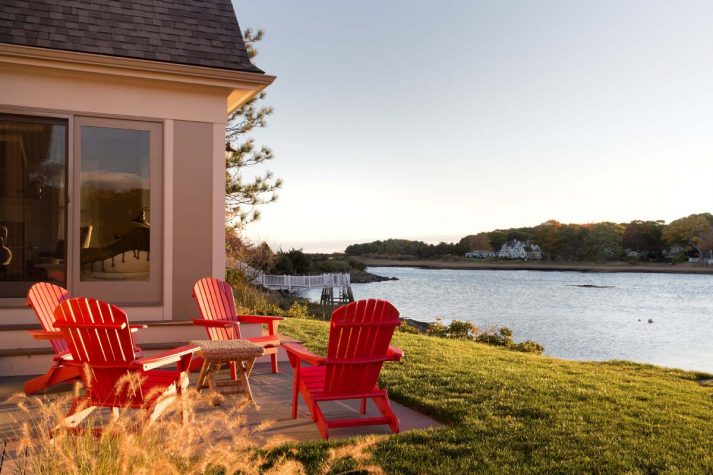 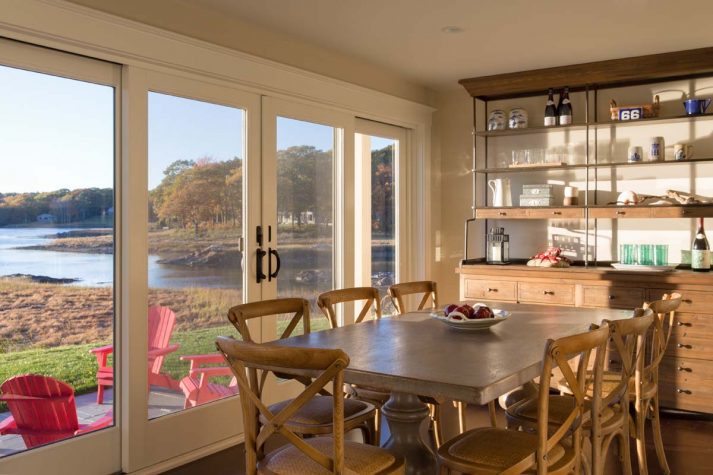 Because of the relatively low ceiling height in the dining area and kitchen, Gifford chose not to do crown molding in these locations. Moody cut down the legs of the reclaimed wood hutch so that it would fit tight against the ceiling. “We used its ‘crown’ as the room’s crown, adding an architectural element,” says Gifford. The dining table and chairs are from Arhaus. 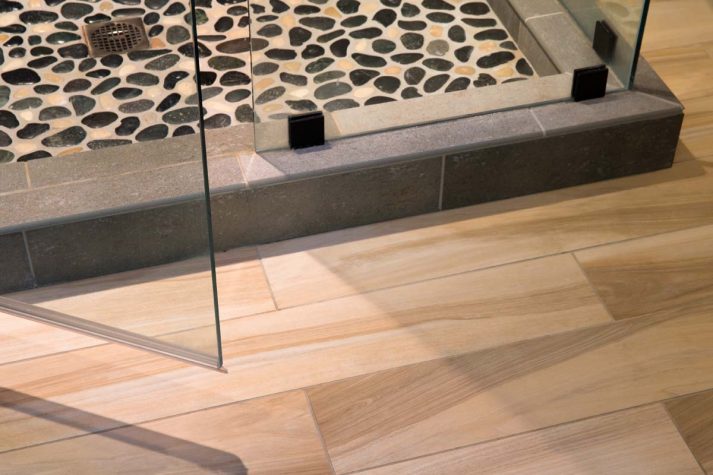 The floor of the guest bath looks like bleached wood but is actually tile. The stone tile of the shower floor reminds Gifford of Pebbly Beach on one of the nearby islands. Both products are from Old Port Specialty Tile Co. in Portland. 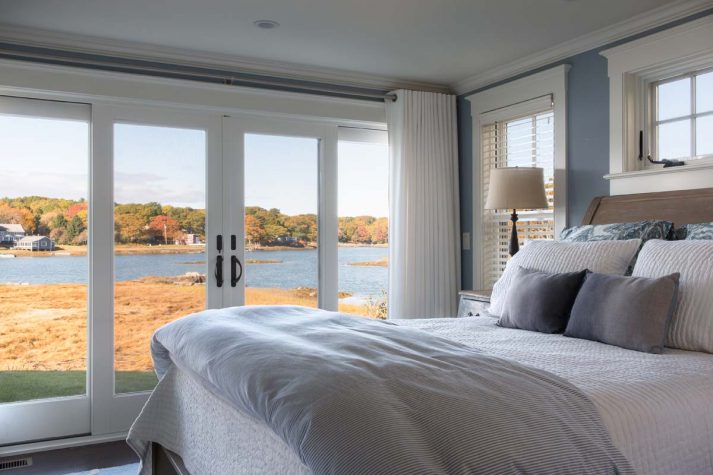 Access to the outdoors is plentiful in the house, even from the first-floor owners’ bedroom . 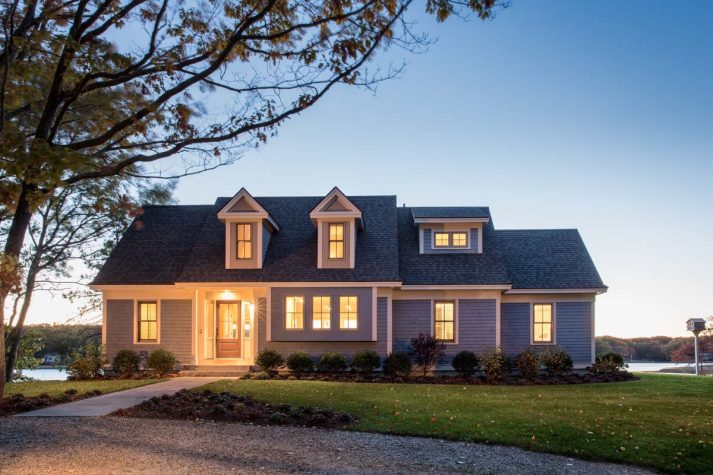 Taking care to comply with shoreland zoning regulations, Moody and the team expanded the site’s existing home vertically. Gable and shed dormers give the façade a more transitional feel than a traditional Cape and allow more usable square footage on the second floor.

Vacations have their own rituals and traditions—especially when they involve a repeat destination, a much-loved place returned to year after year. During my childhood vacations, my parents used to pop in Patti Page’s “Old Cape Cod” (on cassette, of course) as we drove over the Bourne Bridge onto the Cape. As the sound of her mellow, honeyed voice filled the car, we’d unroll our windows and drink up the salty air she was singing about. That was always one of the best parts of the trip, because it signaled the start of a week we looked forward to all year.

For Glenn and Jane Oakley, who live in Maryland full-time, that special “we’re-almost-there” ritual happens when they drive past the Rachel Carson National Wildlife Refuge on their way to Cape Porpoise. No matter the season or the weather, the couple rolls down the windows to get their first whiff of the ocean. Glenn has been coming here every year since he was an infant. His parents’ best friends owned a classic summer home in Cape Porpoise, with a big wraparound porch, bookcases lined with worn, cloth-covered novels, and a pantry filled with mismatched butter dishes for lobster. After a year of dating, Glenn invited Jane to visit Cape Porpoise for the first time. “The unspoiled coastline, salty damp air, and serenity were intoxicating,” Jane recalls. On her first walk out onto the flats in the fog, she knew she wanted to have a house here someday. “I was also kind of hoping it would be with Glenn,” she admits. “I suspect, had I not fallen in love with Maine, he would not have fallen in love with me.”

For the next 30 years the couple vacationed in Cape Porpoise, staying in houses with old plumbing, leaky windows, and creaky floors. Their two sons spent summers on the flats, all but disappearing for hours until the tide came in. When the kids were grown, Glenn and Jane decided it was time to build their own house here, a place their family would always consider home base, regardless of where life took them.

With their travel-filled, fast-paced careers (Jane is a writer and television producer, and Glenn runs global operations for Discovery Channel), the couple sought a serene getaway on the water. They also wanted to create a home that looked like it had always been there. “Cape Porpoise is small and charming and lovely. We did our best to stay true to the simplicity and soul of those wonderful old homes,” says Jane. Also on the couple’s wish list? A porch, lots of windows, and an open plan conducive to family gatherings.

On Paddy’s Creek, the Oakleys found what they were looking for: a waterfront property with an existing single-story Cape they could expand on. The couple hired Wells builder Jason Moody of Richard Moody and Sons Construction, Kennebunkport architect Harvey Wells, and Medfield, Massachusetts–based interior designer (and lifelong family friend) Anisia Gifford to create their dream house.

Located in a shoreland zone and a Resource Protection Area, the new house had restrictions on how much it could be enlarged from the existing structure. “The most challenging aspect was trying to fit everything into the space we had and to achieve a sense of proportion,” says Moody. The team could change the shape of the house’s footprint, but they couldn’t expand the square footage. “We could, however, expand vertically, as long as we didn’t exceed 30 percent of the existing volume,” says Wells.

Working with these stipulations, they created a 1,650-square-foot home with two bedrooms and a bath on the second floor and an owners’ suite and open living, dining, and kitchen area on the ground floor. “When you’re dealing with such limited space, I often refer to ‘Illusion 101,’” says Wells. “The goal was to bring as much of the outside in as possible, with a lot of glass on the water side of the house to maximize the feeling of openness in the interior space.” A cathedral ceiling in the living room also lends a sense of airiness. Gable and shed dormers give the façade a more transitional feel than a traditional Cape and allow for more usable square footage on the second floor. The result of these design maneuverings is a house that feels much larger than it is.

If there was anyone who knew what the Oakleys wanted in this house, it was Gifford. “Glenn is like a cousin to me,” she says. Their fathers met more than 60 years ago in medical school, and ever since the two families have shared time together in Cape Porpoise. Glenn’s parents and her parents own year-round homes in the village; one of Gifford’s brothers purchased a cottage next door to the Oakleys; and Gifford and her other siblings share a cottage that belonged to their grandparents. “Cape Porpoise is where we all come together with our loved ones—it is intergenerational,” says Gifford.

This love of Cape Porpoise—and family gathering—informed Gifford’s interior design and her collaboration with Wells and Moody. “I wanted to capture a feeling of being on top of the waves as the tide comes in,” she says. “We have a nine- to eleven-foot tide in Cape Porpoise, and as children, playing on the rocks with the water swirling around us was the ultimate sense of freedom and carefreeness. I knew that, if I could give Glenn and Jane that perspective, they would feel a sense of calm and peace.”

Almost everywhere you go on the first floor, you feel as though you are standing on a dock overlooking the water. “To us, Maine is not about looking out at its beauty,” says Jane, “but floating on, sinking into, and scrambling over its natural majesty.” Full-view windows without mullions allow for less divided light and uninterrupted views. Spaces are oriented toward the sea, and sliding glass doors allow easy access (visual and physical) to the outdoors. An open cable-rail stair continues the sense of openness onto the second floor.

In the upstairs hallway, a curved ceiling with mahogany ribs is reminiscent of a ship’s hull. And over a two-story built-in bookcase (designed to hide a structural support), three bronze porthole windows Jane found at the Old House Parts Company in Kennebunk bring in natural light. “There is a very fine line between giving a coastal home an essence of the nautical and going overboard and getting too cutesy,” says Gifford.

She used window treatments sparingly, preferring instead to consider the glazing “architectural frames for the artwork of the outdoors.” Nature also informed the interior color palette, composed of cool water hues balanced with earth tones. In the living room, blue-and-white-striped slipper chairs and cobalt window banquettes coexist with dark woods and an earthy green sofa. If not looking at the ocean, one is looking at the woodland-inspired scene that Mamaroneck, New York, landscape designer (and Glenn’s sister) Susan Oakley created. The plants, a mix of deciduous and evergreen, such as native Amelanchier and Carex glauca, offer multi-season interest with a variety of textures and shapes and are tolerant of salt spray, sandy soil, and wind. The landscape color palette was kept simple to complement the exterior paint colors, with leaves in shades of green, purple, and blue and blossoms limited to only white and pink.

These days, a stay in Cape Porpoise isn’t complete until the Oakleys walk the mudflats; take a ride in their old Boston Whaler or the Sunfish they got at a yard sale (and named Yard Sail); eat a messy take-out dinner of fish from Langsford Road Lobster and Fish House; dine at the Wayfarer; ride bikes to Bradbury Brothers Market; view a gallery-worthy sunset from the porch; and play a game of Bananagrams (of which Jane is the disputed reigning champion).

But perhaps none of these traditions is as heavenly as the final ritual of each day: a sound sleep in the cool, heavy air drifting in through open windows. 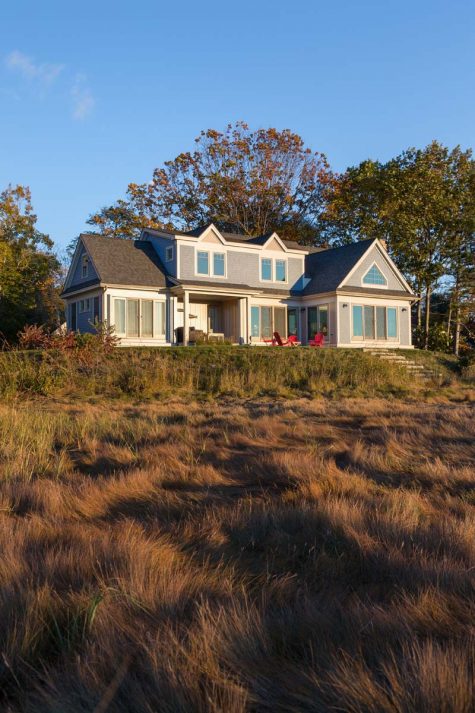 Located on Paddy’s Creek in Cape Porpoise, this house was built by Jason Moody of Richard Moody and Sons Construction in Wells and designed by Kennebunkport architect Harvey Wells and Medfield, Massachusetts–based interior designer Anisia Gifford. Landscape designer Susan Oakley of Terra Bella Land Design in Mamaroneck, New York, kept the rear, water side of the home unobstructed, with only the addition of Miscanthus grasses around the porch “for movement and color change as the seasons progress.” Stone steps provide access to the water and a large spit of tidal land. Oakley chose native creeping evergreen groundcover Arctostaphylos uva-ursi to secure the sandy hill with a low profile. 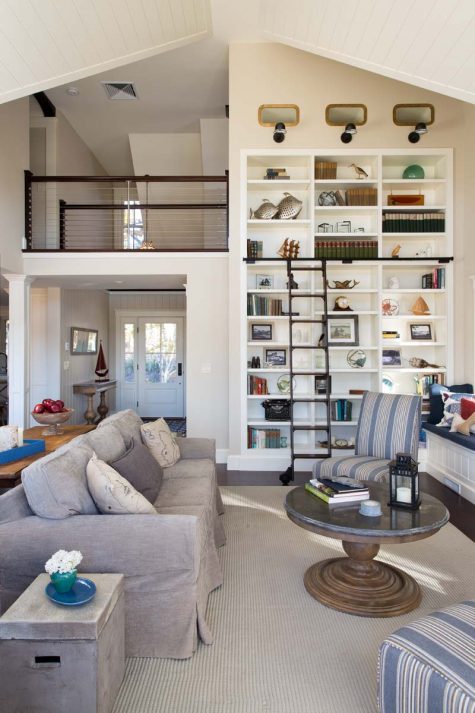 “Ever since I saw Beauty and the Beast I wanted to do a bookcase with a sliding ladder,” says Gifford of the living room’s custom shelving and metal-and-mahogany ladder by Moody. Reclaimed bronze porthole windows overhead let light through to the stairway behind the bookcase wall. 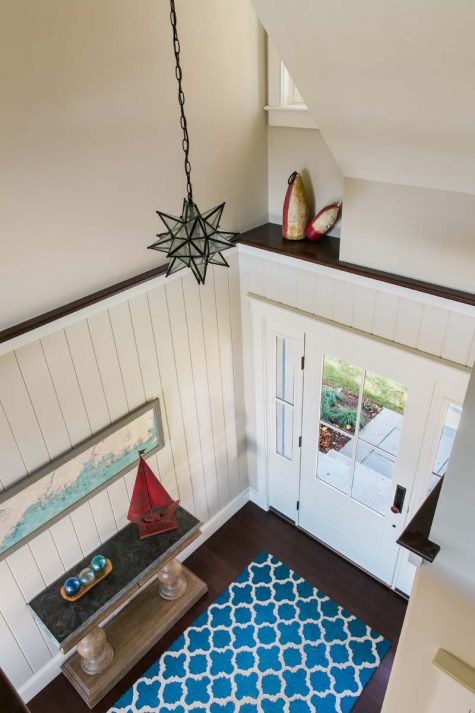 The front entryway features marine-inspired details, including V-groove paneling, mahogany trim, and a nautical map, along with a sea-blue indoor-outdoor rug. 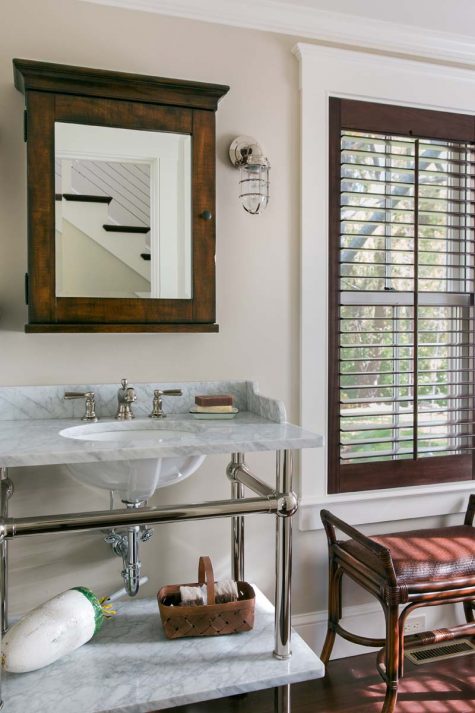 The powder room has a Carrara marble vanity with polished nickel legs, a rattan bench, and stained wood full-view shutters custom made by Shades in Place. “I was going for a touch of British Colonial,” says Gifford.