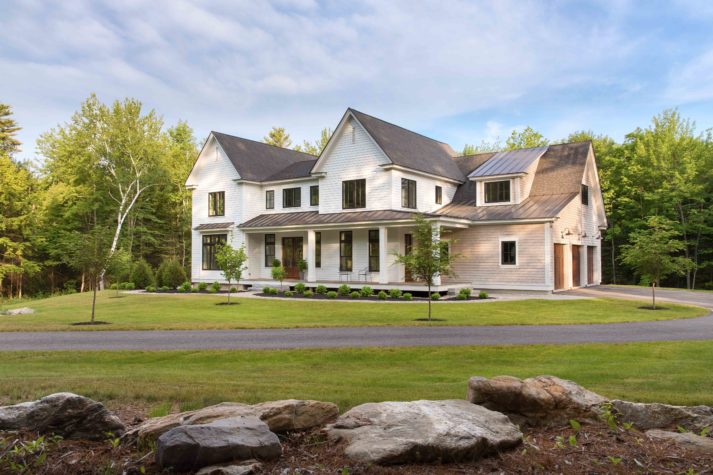 This Falmouth home was designed by Kevin Browne Architecture to marry each of the homeowner’s regional roots: his in New England and hers in New Orleans. Steep roof pitches, a covered porch, tall ceilings, and oversized doors and windows are a nod to the architecture of New Orleans, while the farmhouse aesthetic is in keeping with the New England vernacular. 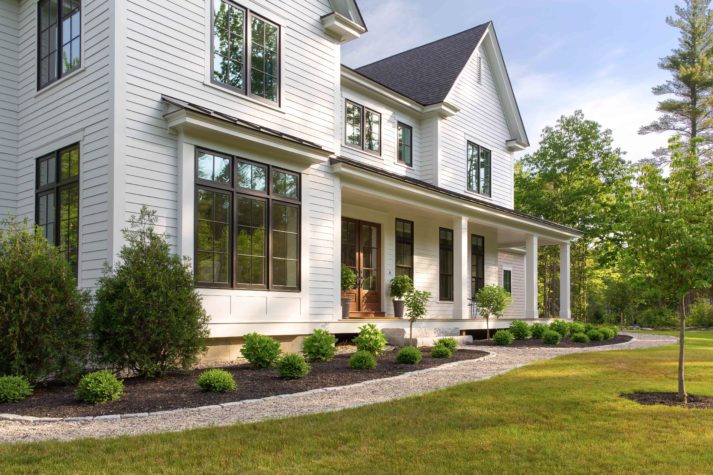 Landscape design by Soren deNiord include creative grading solutions that gracefully transition the front of the house to the back. Gnome Landscapes, Design, Masonry, and Maintenance did the landscape installation. 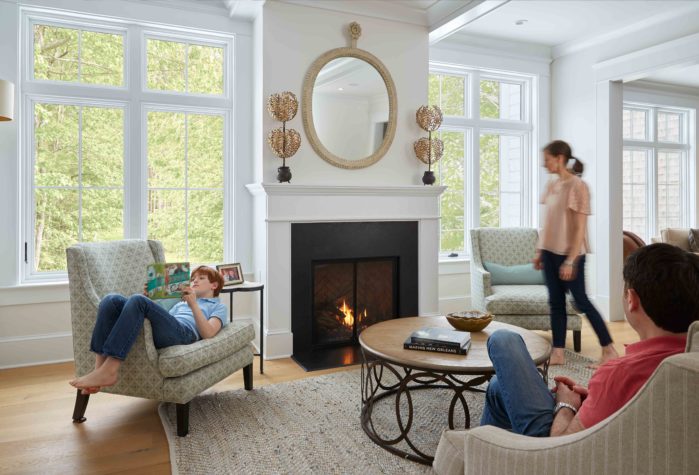 Designing for a family with two young children included creating living spaces with large openings between them (like the living area and kitchen) so everyone could feel connected, even if they were in different areas. Ten-foot-high ceilings give the rooms a generous feel. 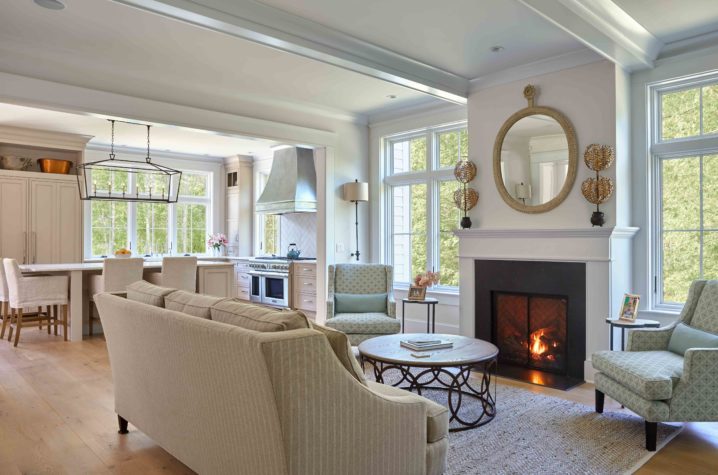 Since the kitchen is open to the living area, a paneled refrigerator was specified to blend in with the rest of the cabinetry. One of the homeowners’ favorite elements is the oversized zinc range hood, which was handmade in Portland by Rusted Puffin Metal Works. 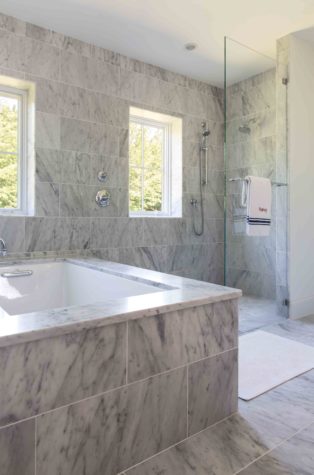 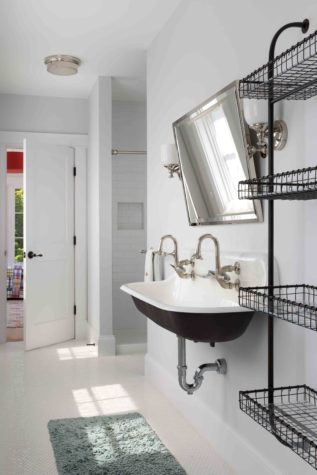 The boys share a narrow, five-foot-wide Jack-and-Jill bathroom. The trough sink was a space-saving solution. 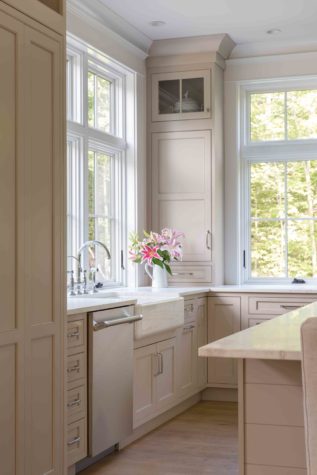 The team at Kitchen Cove Cabinetry and Design worked with the architects to limit upper cabinetry to maximize natural light. In addition, the windows were designed to come right down to the countertops eliminating the need for much backsplash. Beaded inset cabinetry features relatively minimal doors in a light color called Stone Bluff, and the honed Bianco Dolomiti white marble countertops help set off their subtle shade.

When it comes to a love for Maine, Luke Halliger* had a head start over his wife, Jill*—but not by much. Luke grew up on the midcoast and spent summers on North Haven. Jill is from New Orleans originally, but came to know Maine through summer sleepaway camp in Freedom and during family vacations on the coast. The two met at college in Vermont and, after a decade in San Francisco, decided to move to the place they shared a fondness for. “We were drawn back to Maine by its authenticity, its beauty, and all that it has to offer a growing family,” says Jill. Easing themselves out of city life, they landed first in Portland, in a 100-year-old home, then bought a densely wooded and promising piece of land in Falmouth where they could start from scratch and create a home for them and their two young boys.

Falmouth architects Kevin Browne and Chris Herlihy of Kevin Browne Architecture, along with KC Construction and Jarrod Bernier Fine Carpentry, got to work creating a family-friendly home that spoke to the distinct aesthetic of both owners. Jill was drawn to the architecture of her childhood in New Orleans: tall ceilings, oversized doors and windows, and generous mouldings. Luke leaned more contemporary and preferred the farmhouse aesthetic so prevalent in New England. The architects’ challenge was to design a house that would marry Jill’s southern roots with the local vernacular. On the exterior, this meant a covered porch and roof pitches that are steeper than usual. “We felt that Kevin did a great job interpreting our vision for the exterior of the house,” says Jill. “He nailed the directional look and feel with his very first sketch. He really focused on the exterior symmetry, and it executed very well.” On the interior, ten-foot-high ceilings give the rooms a generous feel. One of the strongest nods to New Orleans was made in the window design. Browne and Herlihy’s design called for oversized windows with tall casements and transoms above them that reach within six inches of the high ceilings. “The vertically proportioned grille pattern is reminiscent of a New Orleans home,” says Browne. To balance out some of the more formal elements, the architects kept the inside trim clean, more typical of that found in a farmhouse. Slightly less traditional floors are wide, rustic white oak finished with Rubio Monocoat, a matte, vegetable-based stain, in a greige tone.

Like many modern-day families, the Halligers desired an open floor plan, with one strong exception: they had to have a formal dining room. “An actual dining room was important—we use it for family dinner every night,” says Jill. Having a kitchen at the center of the action was also a top priority. Jill loves to cook but didn’t want to be closed off from the kids or conversations with guests, so a generously sized open kitchen with a multiuse island and high-powered stove and hood was important, as was a walk-in pantry. The kitchen receives ample daylight, so the team at Kitchen Cove Cabinetry and Design kept the kitchen design light and bright. They chose to limit upper cabinetry to maximize windows that were designed to come right down to the countertops, eliminating the need for much backsplash. A large island with drawers for storage makes up for the lack of wall cabinetry, and the beaded inset cabinetry features relatively minimalist doors in a light shade called Stone Bluff, which complements the oak floors. “Since they have a busy family, we stayed away from true white cabinets and chose a taupe color instead,” says kitchen designer Mary Adams. “This helped to create a softer, less formal family space.” The honed Bianco Dolomiti white marble countertops help set off the subtle color of the cabinetry, and the island was designed to offer ample seating. “It needed to accommodate a minimum of four seats, and having seating that is not all in a row is much more welcoming,” says Adams. One of the couple’s favorite elements is the oversized zinc range hood, which was handmade in Portland by Rusted Puffin Metal Works. Since the kitchen is open to the living area, a paneled refrigerator was specified to blend in with the other cabinetry. The opposite end of the kitchen opens up to the dining room, which includes a hutch area and wet bar.

Designing for a family with two young children included creating living spaces with large openings between them so everyone can feel connected even when in different areas, as well as creating distinct areas for play. A den on the first floor is where the TV lives and is a cozy place for the family to congregate. A daylight basement (made possible by the site’s natural drop in grade from front to back) offers a playroom where Legos can be strewn, as well as an exercise area. Upstairs, the owners’ bedroom is situated along the rear of the house with a view of the backyard. The two (equally sized, of course) boys’ bedrooms in either gable are connected via a narrow, five-foot-wide Jack-and-Jill bathroom with a trough sink that follows the shape of the room. An in-law suite above the three-bay garage was added during construction and connects to the main part of the house.

While the visual aesthetic was carefully considered, so too were the parts of the house not outwardly visible. Energy-efficient measures include exterior sheathing with rigid insulation that adds extra R-value to the walls. In addition, two- by six-inch walls with dense-pack cellulose create a more airtight system than fiberglass insulation, and an R60 ceiling was made possible by the truss roof.

Outdoor spaces were also designed to fit the young family’s needs. Landscape architect Soren deNiord (who was brought on after the house was sited) created complementary outdoor areas, which include a dining spot, a kitchen garden, and a play space. “It was a difficult property with a lot of topography, so a lot of thought was put into creative grading solutions to gracefully transition the front and back of house,” says deNiord. The team made a formal gesture in the front with an ellipse-shaped lawn to define a front-of-house experience and create a gathering space.

Today, a typical day for the family centers on the kitchen. The boys spend a lot of time sitting at the island, where they draw, do homework, and eat breakfast. Time together spills over into the living room and den, and in the summer, the doors that lead from the kitchen to the patio are almost always open so the family can move in and out for meals or to work in the garden. The house represents the best of both worlds for Jill and Luke—a place that honors both of their pasts and will carry their love of Maine well into the future.

*The owners’ names in this article have been changed to protect their privacy. 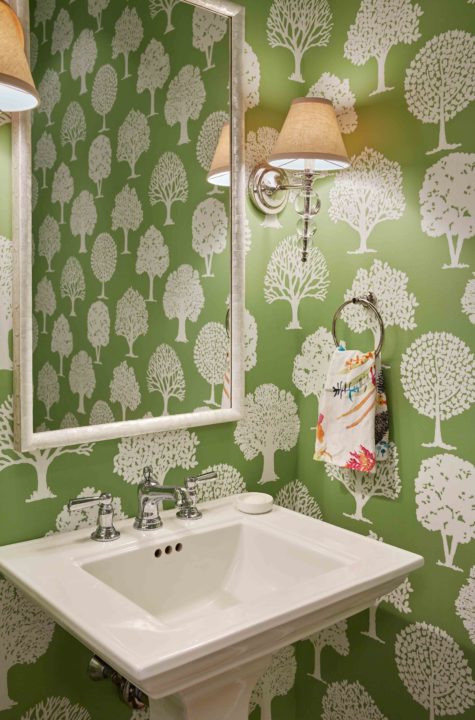 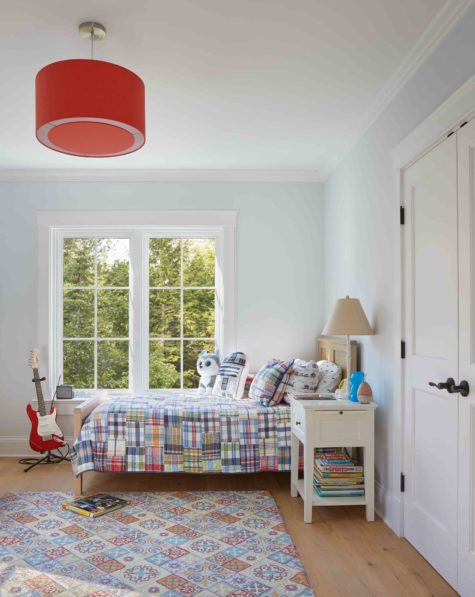 Each boy’s bedroom is located in a gable, and the two are equally sized. 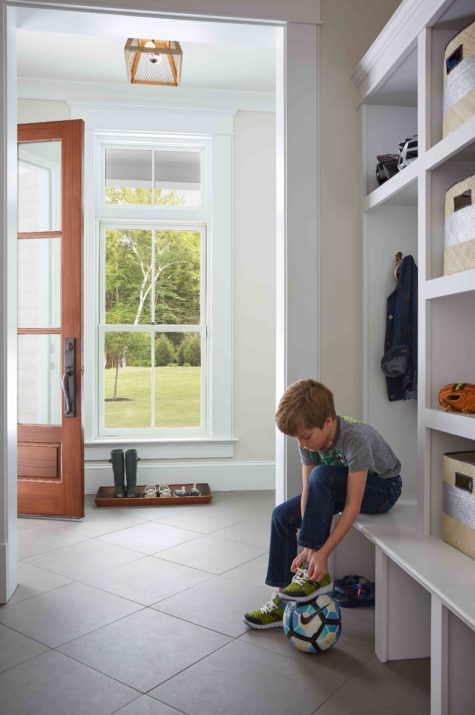 A view of the mudroom with a built-in bench.