A contemporary home on the shore of Harspwell mixes material and textures to create an earthy hideaway in the trees. 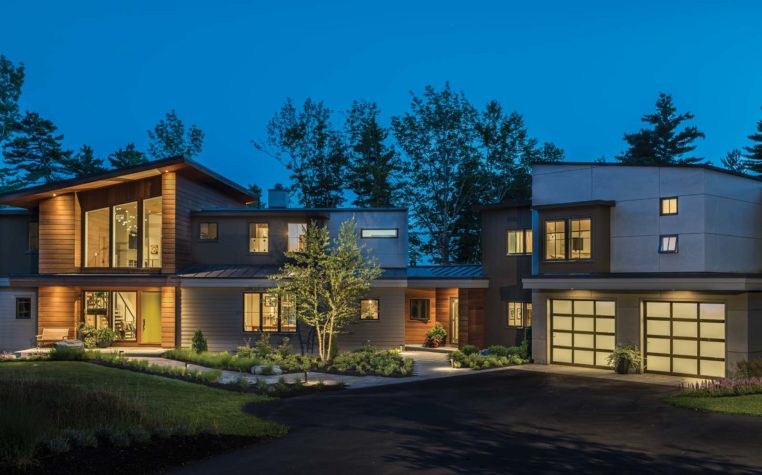 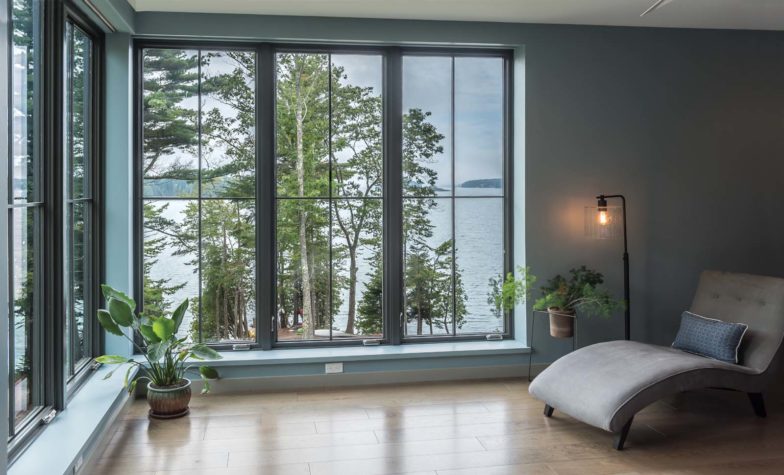 The owners’ suite bedroom looks out at the water. The homeowner decided to paint her bedroom a soothing shade of light blue. “This color reminded me of the outside sky. It’s cool, but there is a tiny bit of warmth to it,” she says. The paint is by Sherwin Williams, and the chair is from Room and Board. 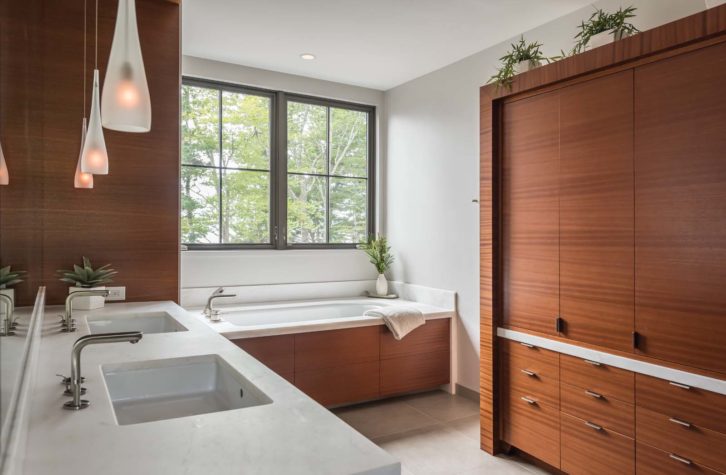 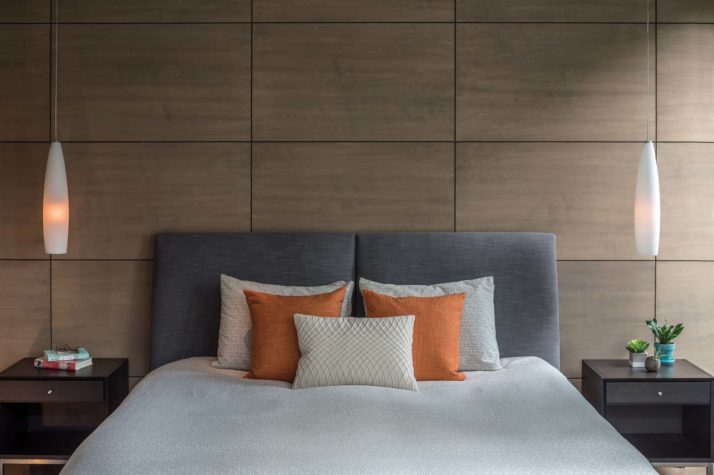 “The wall behind our bed was a painstaking detail—just ask the carpenters,” the homeowner says. “It’s all cedar wood panels that were stained separately and then pieced together.” 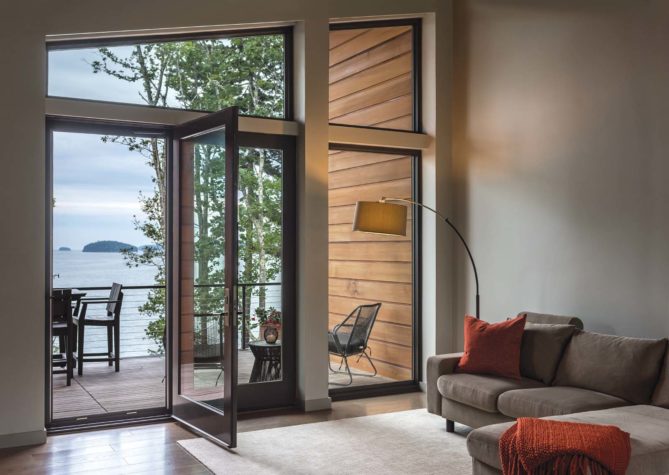 Located on the second story, this sitting room overlooks the water of the Atlantic and features a sectional from Young’s Furniture in Portland. lobby, ocean view, suede sofa, porch, hardwood floor, wood siding 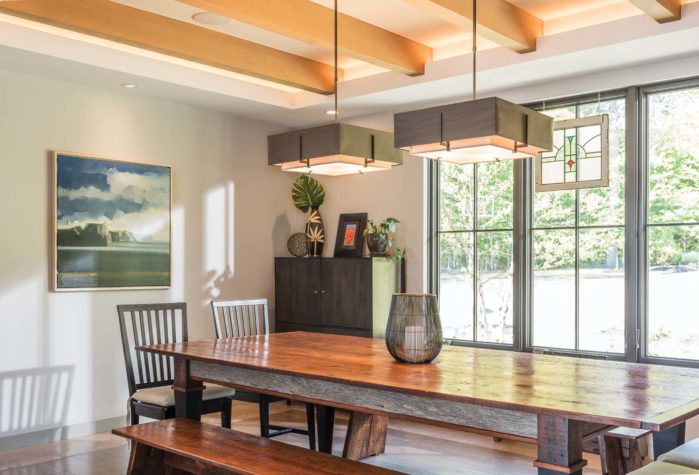 This custom-built dining room table is made from reused floorboards taken from an old house in Bath. The painting on the wall was purchased during a family trip to Iceland. 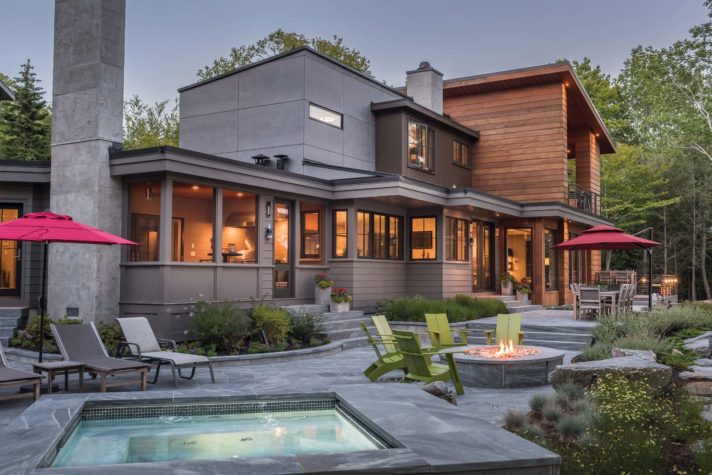 The owners briefly considered putting in a pool but opted for this hot tub instead. 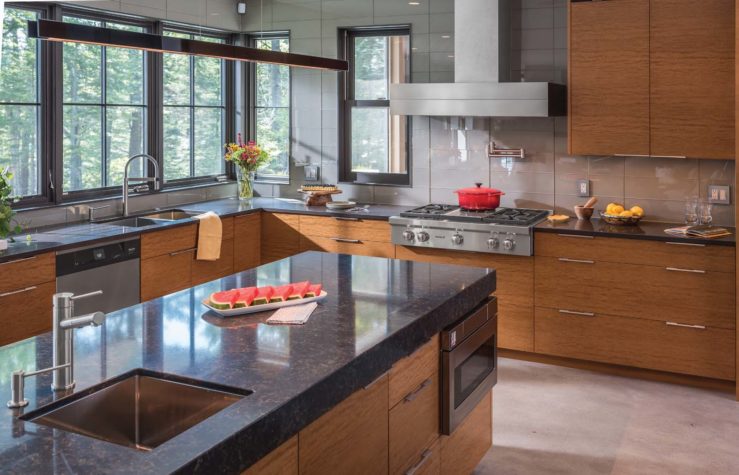 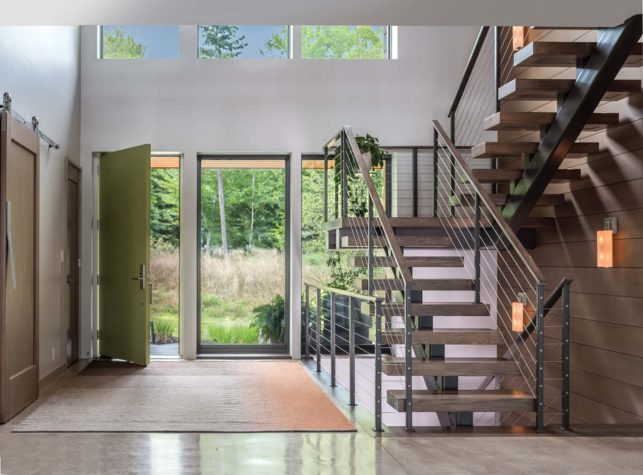 “Green is a color that really matched the outside world, and I wanted to bring a pop of color to the inside,” says the homeowner of their distinctive front door. “It felt like a real green, one you would actually find outside in nature.” Rug from Crate and Barrel. 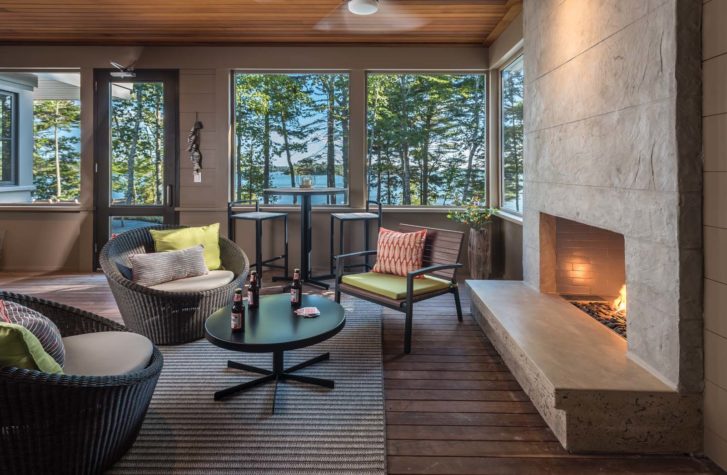 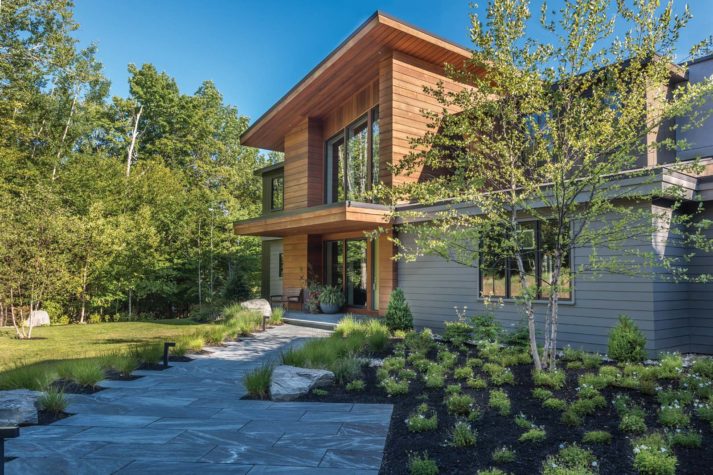 The patio areas are dominated by straight lines and big blocks of stone, which is in keeping with the contemporary feel of the exterior. “We used the plant material to soften the hard lines,” says the homeowner. “The grasses in the front give flow and movement to the hard materials.” 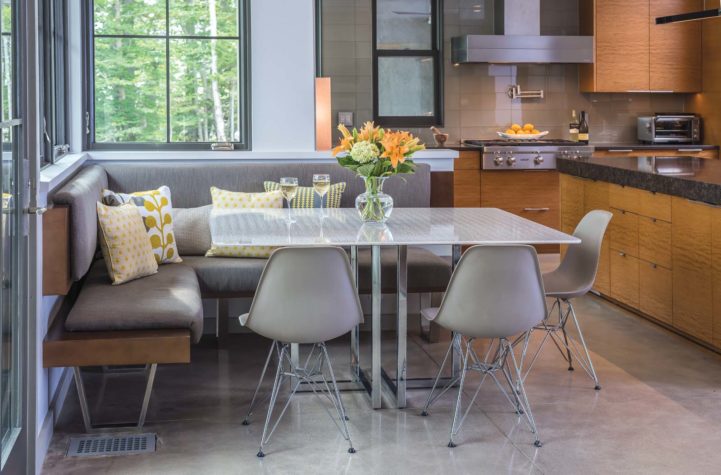 The homeowners use the built-in dining nook in the kitchen for quick and informal meals. 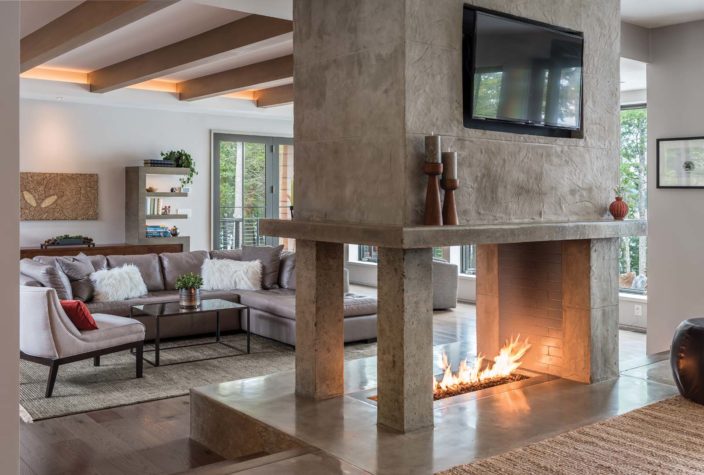 “The fireplace creates enough separation that each area downstairs feels like its own distinct sphere,” explains architect Rick Nelson. “At no point does it seem like an echoey, overwhelming, or too-big space,” adds designer Brady-Anne Cushing.

The land had been in the family for a century, but it still stood empty, save for the tall cedars and sticky pines rising from the spongy carpet of moss that blanketed the ground. “I used to look across the bay from my parents’ house and see these trees,” the homeowner remembers. “I wondered, ‘What’s over there?’ And my dad would say, ‘Someday, that might be where you live.’” At the time, the homeowner says, she couldn’t imagine “living in those scary woods.” There weren’t any houses on that coastal stretch; there wasn’t even a road that ran down from the main byways of Harpswell to this particular piece of land. “But my dad had a dream,” she says. “And now we’re here.”

“Here” is Tide’s Ledge, a contemporary house located on the shore of Great Island. Designed and built by Knickerbocker Group, this structure is the achievement of a lifelong goal, but the path to completion wasn’t always smooth. “We had the foundation in the ground when we decided to do a complete redesign,” Rick Nelson of Knickerbocker reveals. “The client initially asked for a traditional house with modern flair but we began to notice her aesthetic was changing, as she had begun saving images to her inspiration boards that looked nothing like our design. We pulled her aside and asked, ‘Is this still what you want?’”

It wasn’t. The original design was a Cape with dormers and shingles and “a little contemporary flair thrown in,” as Nelson puts it. But it was too traditional for the homeowner. “I got the feeling that we were going to have too many shingles,” she says. “I just…didn’t know if it would be right.”

For two weeks, they put the project on pause as Nelson drew and redrew designs. When construction started again, everything had changed. Sure, they had the same basic foundation and floor plan, but the overall look and feel had shifted dramatically. The traditional roofline was replaced with a series of horizontal lines that rise like a staircase behind the trees. Instead of shingle or clapboard siding, they were using a mixture of gray-painted wood panels and sheets of concrete, offset by some sections of clapboard siding and other areas of board and batten. There is nothing fussy or ornamental about Tide’s Ledge. Instead, it looks as sleek and sturdy as a harbor seal.

Although making the decision to abandon the first design and chart a new course was certainly stressful, the homeowner is pleased with the final result. It better suits her tastes, though she does admit her husband had reservations about the unorthodox form. “My husband freaked out a little—he was worried we’d be living in a cold modern house, some white cube,” she says. And even though it was her vision that pulled them forward, she felt that way sometimes, too. “Honestly, I didn’t sleep for three years while we were building,” the homeowner says. “I needed to put my stamp of approval on everything. I would lie awake at night running things through my mind, wondering: How will this look? How will this feel?”

But her hands-on approach paid off. She, Nelson, and interior designer Brady-Anne Cushing, also of Knickerbocker, created a cohesive house that feels right at home in the forest yet includes all the creature comforts one could want (including an outdoor hot tub, several gas fireplaces, and a fully kitted-out kitchen). “It was really designed for our needs,” says the homeowner. “We plan to live here until we can’t.” And, should the day ever come when climbing stairs no longer works for the couple, they know exactly what they’ll do: add an elevator that goes from the basement level to the top floor, running through the center of the house. “We planned ahead,” she says.

The homeowner can’t pinpoint her single favorite space in the house because, she says, they use them all differently. The upstairs is where she and her husband retreat to the privacy of their big corner bedroom and en suite bathroom. They have two walk-in closets, a living area with a television, and a second apartment for guests (including their four adult children). In contrast to the intimacy of the second story, the first floor functions as a more public area. The downstairs living room is great for entertaining, with its low, comfortable sofas and soft, neutral-hued rugs. Yet it’s a perennial truth that the kitchen is the heart of the house and the focal point for every good party. “I wanted an open kitchen, living room, and dining room so that it would be easy to mingle,” says the homeowner. “I went through every single detail of that kitchen because it was so important for it to be user-friendly.” She wanted a large island where she could do prep work and a small built-in sink for rinsing vegetables. Instead of adding stools, the couple decided this area would be standing-room only, which helps encourage guests to move from one space to another. After stopping to gab with the hostess at the kitchen island, they can grab a drink at the bar by the dining area and wander into the living room to look out at the islands as they sink into the fog.

During the design process, Nelson and Cushing worked hard to ensure that there would be balance throughout the house—that it would be open but not intimidating; minimalist but not overly sparse; earthy but never rustic. “The fireplace creates enough separation that each area downstairs feels like its own distinct sphere,” explains Nelson. “At no point does it seem like an echoey, overwhelming, or too-big space,” says Cushing. “At each point in the house, wherever you stand, your eye is drawn to another part. It’s like looking at a painting in that way; it creates a flow and movement.”

They achieved this effect by using a variety of natural and man-made materials, united by their similar colors and tones. Even though they used five different types of wood, including fir, oak, maple, cedar, and an African hardwood called anigre, they treated them all with similar stains. “They have a different feel, but they still speak to one another,” says Cushing. Similarly, while the floor and the fireplace are both made from concrete, they have been given different finishes. The fireplace has a rough, textured feel, while the floors are polished and shiny. The gray palette balances all these different textures, much as the stain connects the various grains and patterns appearing in the wood.

The theme of suspension is subtler than the home’s colors, but once you know what to look for, you begin to see floating elements everywhere. “There are cantilevers throughout,” says Cushing. “There are floating steps on the staircase, and the fireplace mantel is cantilevered concrete. Many of the built-in elements seem to be floating off the wall.” This created challenges for the construction team, but Cushing says it was worth it. “Although there are a lot of heavy materials, the floating elements give them a lightness and balance,” she says. Waterfall countertops help visually reinforce the streamlined effect, as do the baseboardless walls. “There are two reasons baseboard exists,” explains Nelson. “It protects the drywall and allows you to hide little mistakes.” With no baseboard to hide behind, the construction team had to work hard to ensure that every edge was perfect. The wallboard floats above the flooring by an inch, and yet you’d never notice it. That’s the contradiction of Tide’s Ledge: although it looks incredibly simple, each supposedly minimalist detail required hours of work with steady hands and precise tools. When all you see are straight lines, with no ornaments or moulding, every line has to be perfect. This applies to cabinetry and wall paneling, masonry, and tiling. “There were challenges for our craftsmen because of the design and unique materials and building styles,” Cushing says. “But they rose to the occasion.”

And although her husband and father expressed some concerns about placing a contemporary house back in these lush old woods, they now agree that it fits perfectly into the natural landscape. “It’s funny,” says the homeowner thoughtfully. “People will tell me that you can’t see it when you’re kayaking by or on the water. You don’t see the house until you get right up close. It nestles into the coastline.” The gray house speaks to the gray stone, and the cedar panels are, if you squint, almost exactly the same red as the pine needles. Should any little girl look out from her window across the bay and see these woods, she can still wonder: What’s over there in those wild trees? And if the light hits the windows just right, like it does at sunset when the windows gleam gold, she might just get her answer. 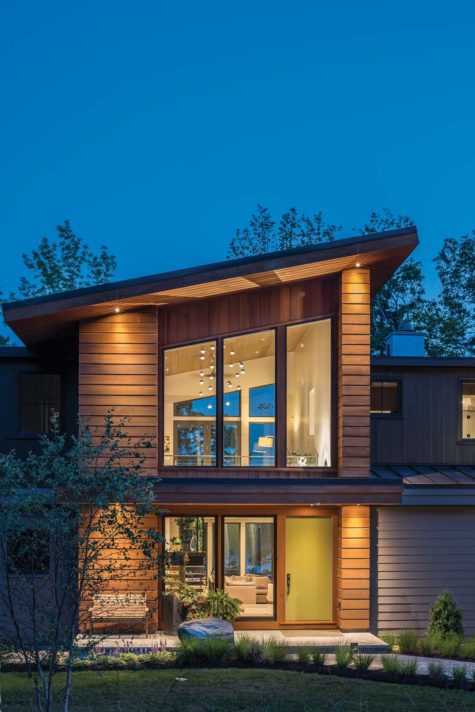 Designed and built by Knickerbocker Group, this contemporary house sits on a hill above the waters of midcoast Maine. The home was built with multiple levels to conform to the land’s elevation changes. 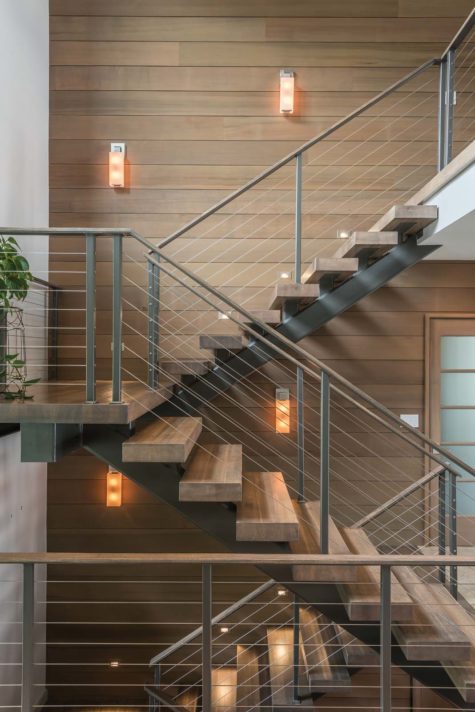 Located in the center of the house, this cantilevered staircase appears almost to float in midair.