All the Fest’s a Stage 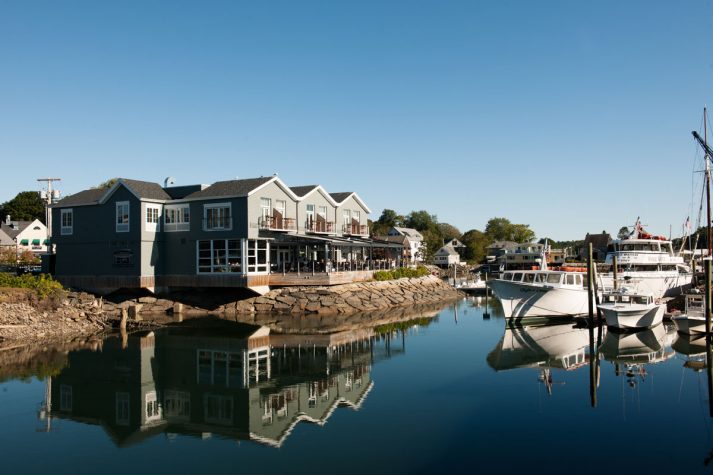 During the festival, the decks of the powerboats and sailboats on the river brim with people. 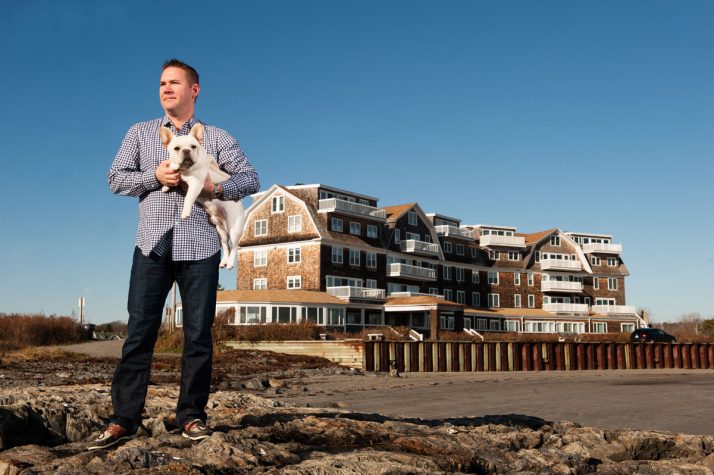 Rick Taranto, owner of Details Event Staging and Old Vines Wine Bar, and his French bulldog, Arthur, take in the view from Gooch’s Beach. The Narragansett by the Sea condominiums are in the background. 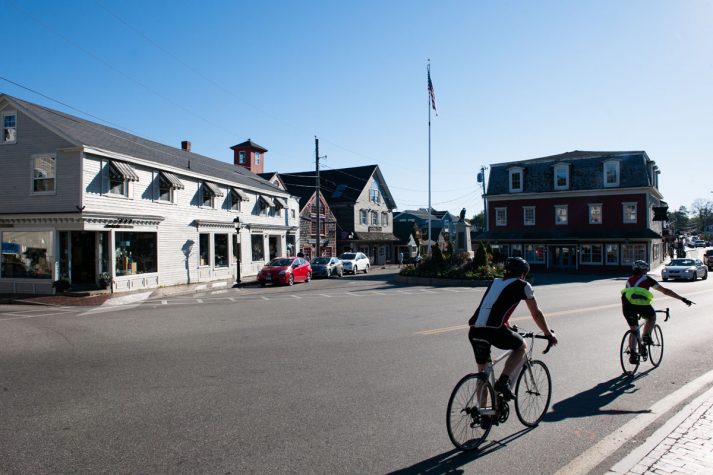 Cyclers pedal past the boutiques, inns, and restaurants in Dock Square. 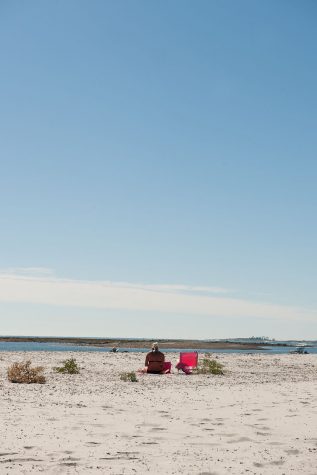 Although Maine is known for its rocky beaches, Kennebunkport is home to several white-sand stretches, including Goose Rocks Beach, shown here.

Meet the Mainers-the movers and shakers, creatives and chefs-who make the Kennebunkport Festival such a spectacular week.

In late spring, the sun lingers on the horizon for almost an hour before setting, like a child ignoring bedtime. It stains the sky over Kennebunkport with watercolor hues, and if it’s calm enough, the sea acts like a mirror for the descending star. The world seems open and expansive, and if you listen closely, you can hear the sounds of clinking dinnerware and
warm chatter spilling from decks and patios.
It was on one of these long, sweet presummer days that chef David Turin fell in love with Kennebunkport. He had visited the town only once or twice when he was invited to cook one of the Kennebunkport Festival’s Art of Dining dinners at frequent hostess Ronnie Hass’s house. Turin drove down from Portland, not knowing what to expect from the dinner or festival in general. What he found was eye-opening: “It felt like Vail, Colorado, in the springtime or some cool metropolitan village in Europe,” he says. “Kennebunkport had developed into this amazing, cultured little town. Iconic is an overused word, but that town is iconic Maine. And the Kennebunkport Festival is just that— iconic.”

Now, Turin has become an integral part of the Kennebunkport Festival, which runs this year from June 6th through the 11th and raises funds to benefit Full Plates Full Potential, a nonprofit working to end child hunger in Maine. He returns year after year to cook at various events, from small, intimate dinner parties to larger productions, such as the Spirit of Maine, which welcomes 400 guests and features cuisine that celebrates the state. Last year, Turin honored the Maine mushroom at his buffet station, pairing locally grown fungi with smoked meats. “That was my version of what’s Maine—savory and rich,” he says. But Turin’s involvement with the festival has spawned more than just a few delicious dishes. It also inspired him to open up his waterfront restaurant David’s KPT, which he did with the help of his business partner, hotelier and developer Tim Harrington. “If it weren’t for the festival, I never would have met Tim,” says Turin. Their first encounter took place on a wraparound porch by the ocean. Turin was serving butter- poached lobster, and Harrington was so impressed with the dish that he went to find the chef. “Who knew you could open a restaurant with just butter and lobster?” Turin says, remembering that particularly Maine bit of kismet.

Unlike Turin, Harrington has never been surprised by Kennebunkport’s culinary offerings, primarily because he has had a hand in developing many of its restaurants through his group, the Kennebunkport Resort Collection For Harrington, the decision to get involved with the Kennebunkport Festival was an easy one. “The restaurant scene in Kennebunkport has changed dramatically over the years,” he says. “We have such remarkably good food—and not just at my restaurants. The food scene has become very chef-driven and diverse.” According to Harrington, the festival and the local food culture have evolved hand in hand. Restaurants are buoyed up by the additional traffic brought in by such a big, well-publicized event, and festival goers are rewarded for their curiosity with a series of fantastic meals.

In talking about the Kennebunkport Festival, it becomes difficult to tease out the various components. There’s the food, sure. Then there’s the art, the decor, the people, and the wine. But, as with any good party, these elements have all become so intertwined that they spill into each other—no one seems able to recall the food without also mentioning his or her dining companions, host, and place setting.
Of course, behind every great party is a great deal of work. When the party lasts an entire week, it takes even more effort to pull everything together seamlessly. “Most people remember the things that are tactile—the food, the wine,” says Rick Taranto of Details Event Staging. “But it’s the environment that elevates the experience and creates something truly memorable. Hosting is like putting on a play. If you create the proper stage or set, the actors—food and wine—are able to show up and be the main event. The goal is for all elements of the event to blend together, creating a unified experience that feels good from top to bottom.”

Taranto’s association with the Kennebunkport Festival began with a single Art of Dining event, but as the festival grewinsize,sodidhisrole.“ Ihelp others to host memorable events, and through that I meet so many smart, fun, interesting, and talented people in my own community,” says Taranto, who also co-owns Old Vines Wine Bar. He shares his hard-won party-planning knowledge with fellow residents, temporarily transforming their homes into artful settings for the annual dinner party events. Previous parties designed by Taranto have included larger-than-life, all-white pieces of furniture (for an Alice in Wonderland–themed bash) and an English-garden-style “Pimm’s on the Patio” cocktail party at Old Vines.

While the direct result of all this effort can only be observed at a festival event, organizers hope that there will be long-term benefits for the town. “One of the biggest reasons we decided to partake in the Kennebunkport Festival is because we want to help make Maine, and Kennebunkport in particular, into a food destination,” says award-winning chef Justin Walker of Earth at Hidden Pond. “We believe strongly in hard work, and we know that we need to work hard to get there.” Debbie Lennon, owner of Blue Print Management and a consultant for the Kennebunkport Resort Collection agrees: “We want to build awareness of Kennebunkport into the travel market so that we can become as well known as the Hamptons, Nantucket, or Newport.”

“There’s always been a strong culinary element in our town, thanks in part to resorts like the White Barn Inn and Cape Arundel,” Lennon continues. “But the festival has helped this grow exponentially. It celebrates that there is a plethora of interesting chefs in this market, and it brings people in from out-of-market.” For many business owners, the festival provides a jumpstart to the summer tourism business, drawing people in from over state lines and even national borders. The festival is an attraction that helps hotels book rooms during a tricky shoulder season. Restaurants see an uptick in business during the week, as do retailers.

Louise Hurlbutt, a celebrated interior designer who has been involved with the event since its early years, says the exposure generated by the festival has been great for her seasonal business in Dock Square. (She also operates a year-round retail store in Kennebunk.) “Originally, the festival was started by the inns,” she remembers. “They wanted to get more business in June. And for those of us who own local businesses, it’s important that June become a viable tourism month. I see the Kennebunkport Festival as a very positive thing.”

The festival and the town exist in a symbiotic relationship. The festival is made better by the town, and some argue that the town has been improved by the presence of the festival. “There are always some negative people who want to critique what is going on,” points out builder Kevin Lord of Thomas and Lord, who has been sponsoring the festival since Maine Media Collective (the parent company of MH+D) became involved in 2010. “But in the crowd I hang out with, everyone is excited about the festival. As a developer, I welcome change. And the people I enjoy spending time with—they do, too.”

For these supporters, the festival provides an opportunity to kick back and catch up. Winter is Lord’s busiest season— “People want their summer homes built by summer move- in,” he says—so the return of warm weather marks his time to relax in the town he calls home. “I have a lot of friends and business associates who disappear in the winter. I know I’ll see them at the festival, and we can reconnect just like winter never happened,” he says. Adds Harrington: “My reason for loving the festival is wrapped up with my reasons for loving Kennebunkport. It’s all about the people and the friendships,” he says. “It’s also become a family event for me and my brothers and their wives. It’s our happy place, our summer kick-off. We run around as a pack and have a whole lot of fun.”

And therein lies the magic of the festival: it highlights the region’s assets while providing a space for friends and families to unite, business owners to meet with clients, and new friendships to form. All while “helping put Maine on the map in a big way,” says Hurlbutt, and helping an important charity. Turin adds that, although he hates the phrase “see and be seen,” he feels that it does apply to the event. “I mean it in a good way. It’s amazing that this small coastal town acquires such a feeling of celebrity and celebration. Between the chefs, wine makers, and artists, he says, “there are all these people you’re dying to know.” Put another way: this weeklong party is the perfect mix of work and play. MH+D 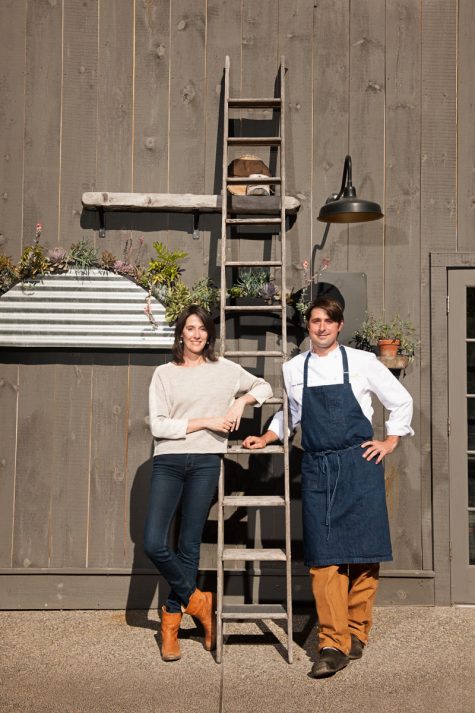 Chef Justin Walker and his wife, Danielle, pose in front of their locavore restaurant Earth at Hidden Pond. 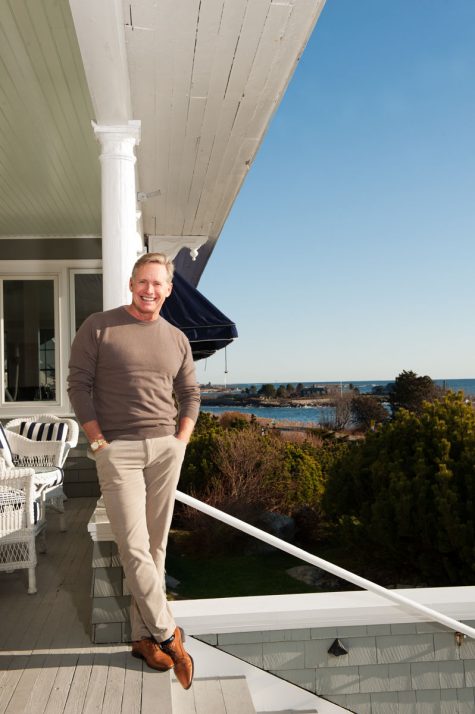 Hotelier and developer Tim Harrington relaxes on the porch of the Cape Arundel Inn and Resort, one of the properties he owns. 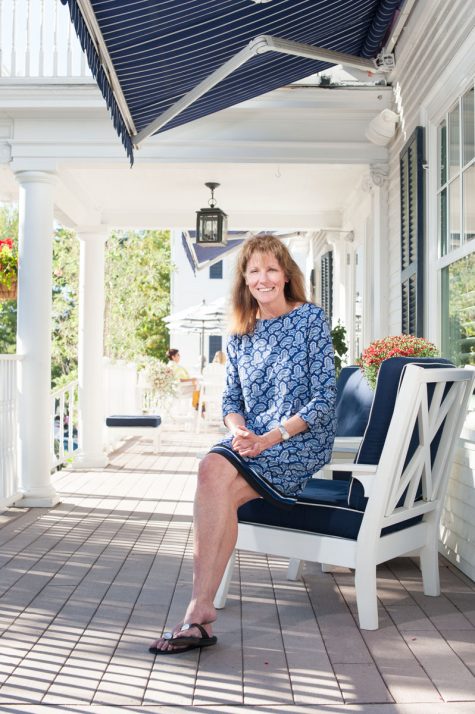 Blue Print Management’s Debbie Lennon is pictured on the porch of the Kennebunkport Inn. 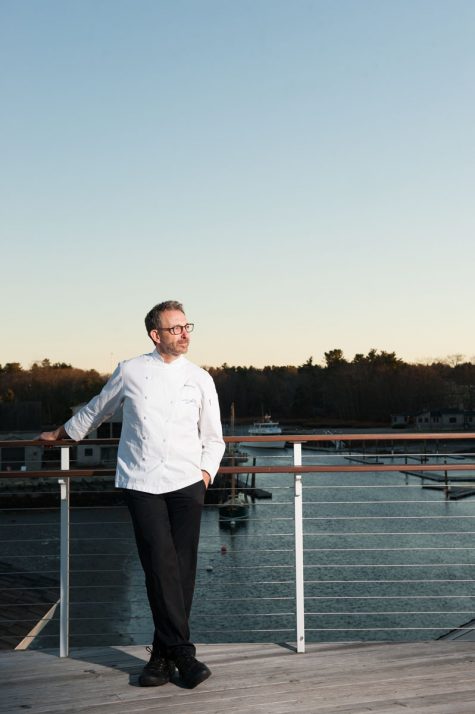 Chef David Turin stands on the deck of his restaurant, David’s KPT, overlooking the Kennebunk River. 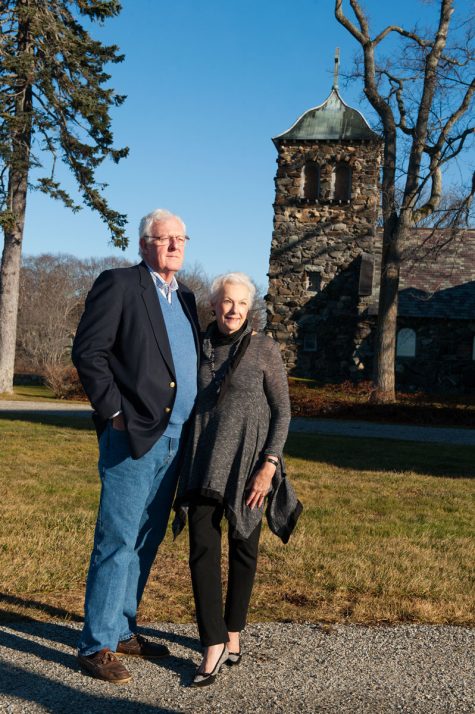 Interior designer Louise Hurlbutt stands with her husband and business partner, Ralph, on the lawn in front of St. Ann’s Episcopal Church.