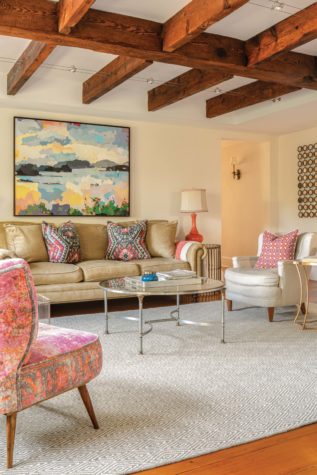 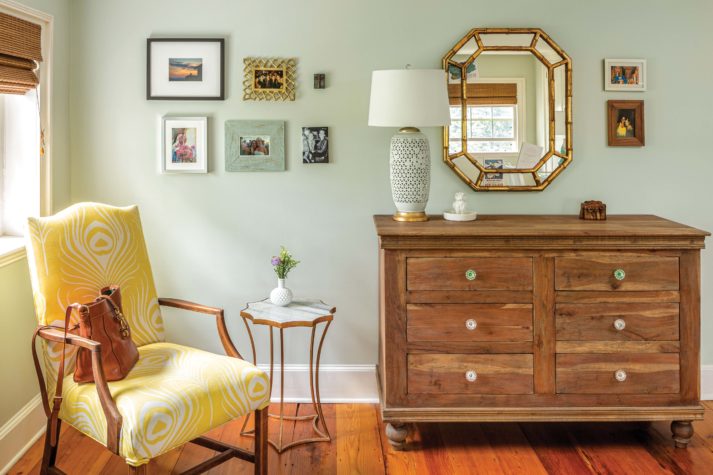 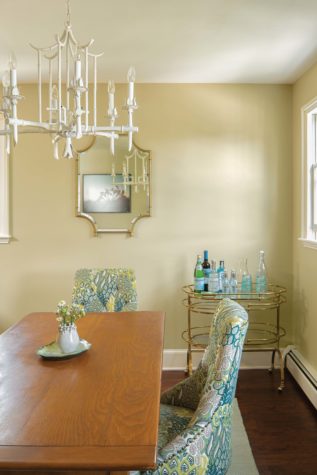 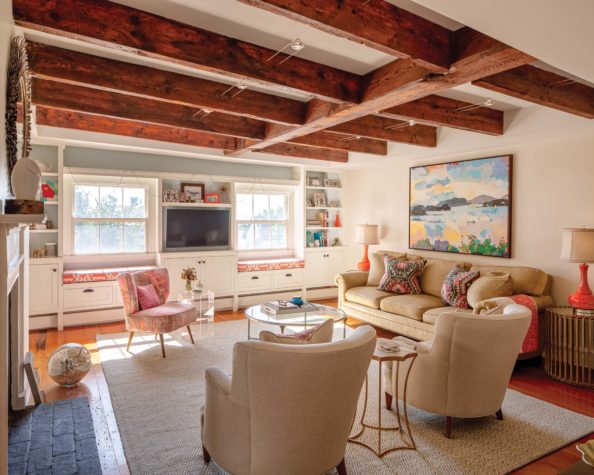 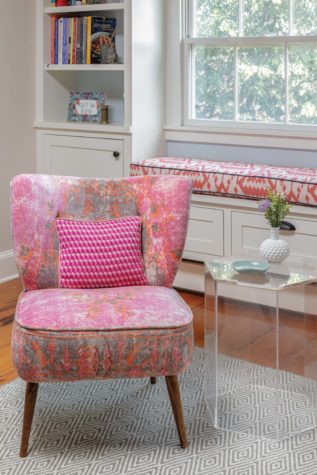 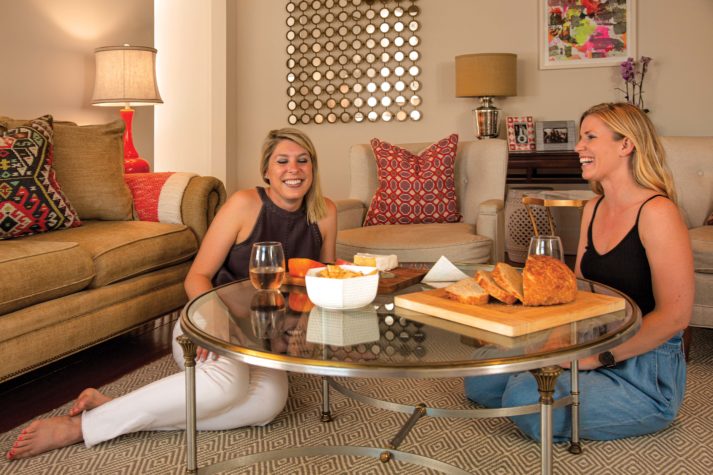 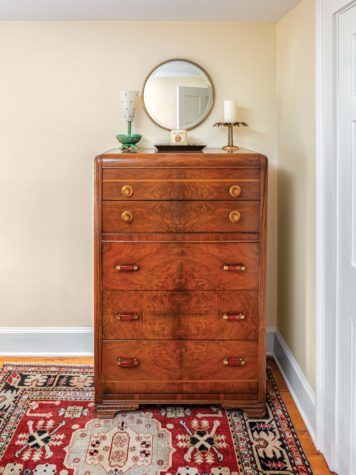 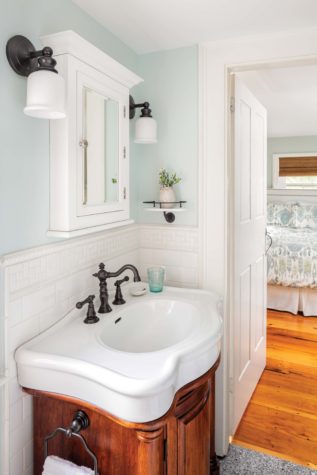 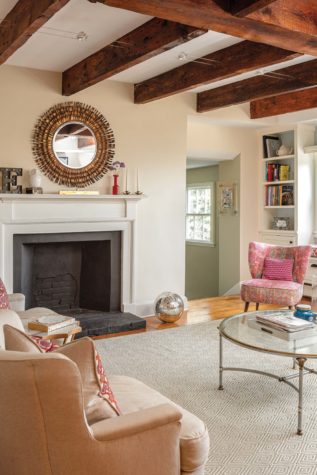 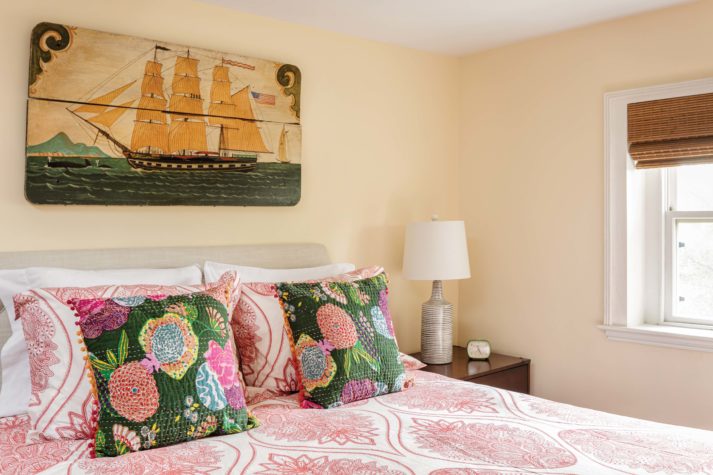 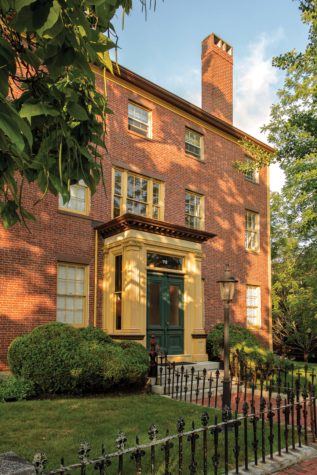 For a single millennial who grew up in the warm embrace of Atlanta, pulling up roots and relocating to the northernmost state in the lower 48 represents a daring move. It’s an adventure Elena Duralde dove into with eyes and heart wide open.

“My father is from Georgia, but my mother has family in Maine, and I spent all my childhood summers in Boothbay Harbor,” says Duralde. The summer before she graduated from the University of Georgia’s Lamar Dodd School of Art, in Athens, with a BFA in interior design, she interned for the Knickerbocker Group, in nearby Boothbay, then returned home to Georgia and pursued her interest in art, history, and design in her first post-grad job, working for a well-respected Atlanta antiques dealer.

As the daughter of art collectors and a lifelong student of history and handcraft, the young designer found herself drawn to the beauty of old wood, metal, and glass. No wonder then, that when she was offered a dream job by the Knickerbocker Group’s president and CEO Steve Malcom, she was drawn to the prospect of making a home in the historic and culturally rich city of Portland.

The Knickerbocker Group has established a well-earned reputation for fine home building, architectural design, woodworking, and construction management. Now, the firm told Duralde, they had launched a dedicated interior design department, and she—their former intern—was one of the first to be offered an opportunity to come on board. “When I was offered the job, I had just signed a new lease on an apartment in Atlanta,” Duralde says. “But I knew this job would not wait for me forever, so I made the decision to move to Maine—in February. It was quite a climate shock for someone from the South accustomed to Maine’s glorious summers!”

Family welcomed the Georgia transplant warmly, inviting her to stay with them in their home near Boothbay Harbor while she hunted for a permanent place to settle. She had her heart set on Portland, a little more than an hour down the coast from Boothbay, where the Knickerbocker Group also maintains offices.

“I knew I wanted to live in a vibrant city—I love the small size, the energy, the architecture, the art, the shops, the restaurant scene,” Duralde explains. “They ease the overwhelming feeling that comes with moving to a new place where you don’t know anyone yet.”

When she found Unit 5, on the top floor of a three-story brick beauty in the heart of the city’s West End, she knew she had found a place where she could feel at home.

“I was the first resident to move into the renovated building after it was converted into condos in 2014. As soon as I walked into this unit, I felt it was the right place for me,” she says. Built as a single-family home in 1807, the repurposed building now contains seven condominium units, each one different.”

The first-floor apartments have high ceilings, elaborate millwork, and fancy chandeliers. The second floor’s ceilings are almost as high, but the millwork is far less formal and elaborate. “The third floor, where I live, has low ceilings, exposed beams, and beautiful wide-plank heart pine floors—all original to the nineteenth-century building,” she explains. “The 200-year-old wood gives the place an almost rustic feeling—which is what I first loved about it.”

The unpretentious simplicity of the place made Duralde feel immediately at home. The only thing left to decide was how to furnish it.

“The exposed beams create an illusion of height in the living room. But I was conscious of the fact that, because the ceilings are low, I needed to be intentional in my furniture choices and choose pieces that are low and small in scale,” the designer explains. And, while she wanted to infuse the historic interior with fresh color and personality, she also took pains not to clutter it up.

That’s where her design partners at the Knickerbocker Group pitched in, offering two key contributions: the living room’s wall unit and the installation of an overhead cable-lighting system with adjustable halogen lamp heads. “I wasn’t sure we would get permission to drill through the beams to install the cables, but I was so happy we did, because the lighting makes such an important difference in the room.”

The wall unit Knickerbocker designed and constructed for the space serves multiple roles, including TV cabinet, window seating, bookshelf, display case, and storage cabinet. After all, what city apartment dweller ever has enough storage? Knickerbocker’s precise measurements were calculated to accommodate the pronounced slant of the interior’s well preserved plank floors. “The quirks are all part of the charm,” Duralde says.

The designer’s affinity for furnishings that proudly wear their age is evident in the objects she brought into the renovated space. The living room’s comfortable linen-covered easy chairs are secondhand finds from the multi-dealer Atlanta antiques and vintage gallery Decades. In a guest room, a Turkish rug that Duralde’s parents brought back from their world travels partners with an Art Deco chest of drawers found at the Portland shop Cherished Possessions. As for the chic pagoda-lantern-style chandelier that hangs over the dining room table: “I rescued that from a neighbor’s trash back in Atlanta and then painted it and had it rewired,” the collector says. The brass-and-glass bar cart in the same room, a housewarming gift from Duralde’s mother, was more of a splurge, but it, too, came from a consignment shop—this one in Arizona.

Duralde’s carefully curated art collection—like the fabrics and paint colors she chose for her new home—reflects her affinity for a vibrant palette, geometric shapes, abstract patterns, and subtle textures that convey the human touch. “I like a mix of high and low, old and new—a place that feels lively and personal,” she explains. “When a colleague visited me here for the first time, she said ‘This place feels like you,’ which, to me, is the best compliment.”

A floral painting by Columbus, Georgia, artist and textile designer Lulie Wallace is displayed above the master bedroom’s fireplace. A Dorothy Shain print framed in Lucite is hung in the living room.

A cherished work by contemporary American artist Henry Isaacs holds a special place of honor over the sofa in the bright, comfortable living room. Depicting Maine’s coastal landscape, the Isaacs painting—another piece Duralde acquired from her parents’ collection—gained an intriguing new chapter of its own in her new home. “My parents have collected this artist’s work for at least 10 years, and I was so happy they shared this painting with me,” she says. “About a year after I moved in, I received a knock at the door. A new neighbor and his wife had recently moved into the building and were stopping by to introduce themselves.” It was Henry Isaacs and his wife, Donna—who, like Duralde herself, had only recently moved to Portland.

“He was just as surprised to see his painting in my living room as I was to meet him!” she recalls. “He set up an art studio in the carriage house on the property and I’ve had the opportunity to watch him paint. It was one of those amazing stories. “And now it’s part of the 200-plus-year-old history of this stately brick residence in Portland’s ever-evolving West End. 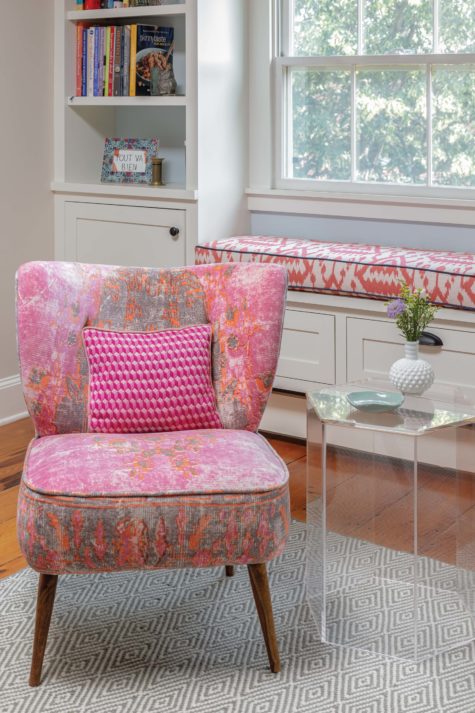 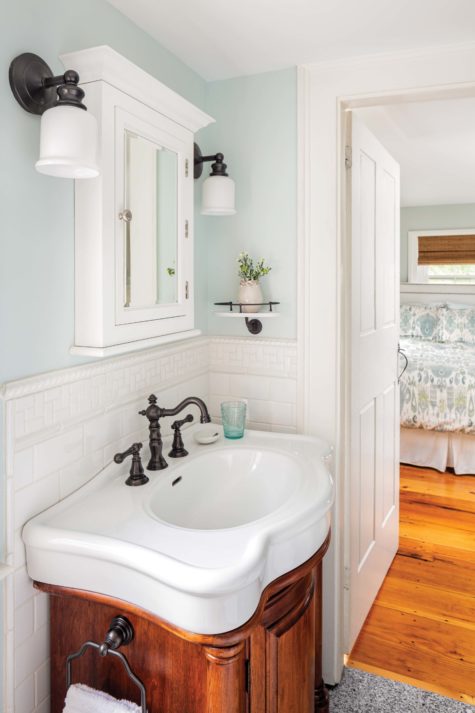 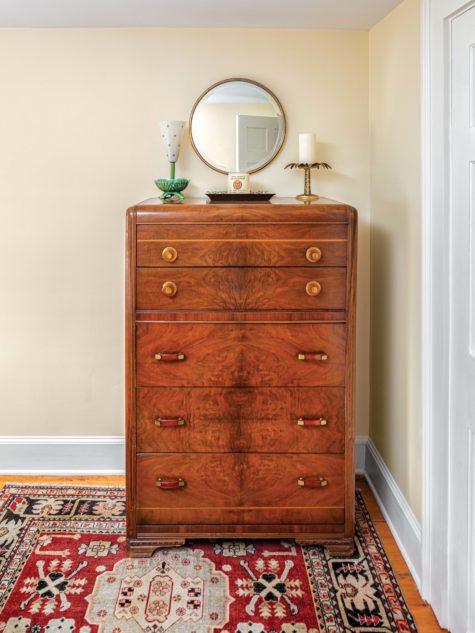